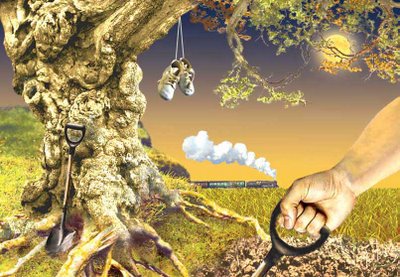 Some Redmoon Theater shows are outdoor spectacles, some are cloistered dioramas. Even on a smaller scale, Redmoon shows always feel like a spectacle. The latest, Frank Maugeri’s Boneyard Prayer, is more of a poem than a story, more of a sketch than a painting. At an hour long, with a spare story, it’s a show that’s almost entirely emotion and mood with little in the way of characterization or plot. And boy, is it grim – right from the first moment, when we see a woman laying a dead infant in a grave. The story of how that baby died is revealed later, a gut-wrenching tragedy.

Like many Redmoon shows, Boneyard Prayer stars puppets alongside the human actors. In this case, the puppet of a man seems to be a surrogate of sorts for one of the actors, who stays close to it throughout the show. The same goes for the female puppet and actress. It was somewhat confusing at first. Do the puppets represent the same people embodied by the actors or another set of characters? The literal meaning proves to be unimportant, however.

Charles Kim’s original music is lovely, a good fit for the play’s melancholy mood. The final moments of Boneyard Prayer include a beautiful scene of hopefulness, achieved by a trick of the scenery that I won’t spoil. Sitting through Boneyard Prayer is a little like attending a wake. The play will send your thoughts drifting off toward the loved ones you’ve lost in your own life. It’s not a deep play (and it is certainly not a show that everyone will enjoy), but it is an affecting one.

Boneyard Prayer runs through May 11 at Redmoon Central, 1463 W. Hubbard St., Chicago (the only theater I know that must be entered through an industrial parking lot). www.redmoon.org