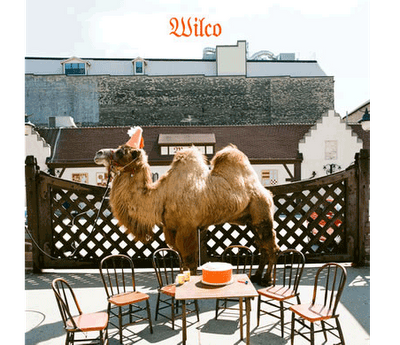 When bands put out self-titled records in the middle of their careers, what exactly does it mean? Is the band saying that this is the record that defines them more than any other? Or have they just run out of titles? The new Wilco album, coming out June 30, is called Wilco (The Album), which makes it almost seem like a joke. And with that cover photo of a camel, you have to wonder: What exactly is Wilco up to with this record?

It’s streaming now at http://wilcoworld.net/discs/thealbum/, and I just listened to it for the first time. Here are my snap impressions of the songs. My opinions are bound to change as I listen more. I’ve been a fan of Wilco since the beginning, but I was disappointed with the group’s previous record, Sky Blue Sky — not a bad record, but one that simply failed to excite me the way previous releases had. So far, Wilco (The Album) sounds like a stronger effort.

Track 1: “Wilco (the song)” — The record opens with a nice blast of the rollicking pop sound that Wilco used to have, back in the days of Summerteeth and Being There. The whole idea of doing a song called “Wilco (the song)” seems a little silly, but the track makes a good first impression.

Track 2: “Deeper Down” — This is one of those quiet Wilco songs where Jeff Tweedy sings in a gentle, sensitive tone. The song has some ornate touches, including strings and a harpsichord-like keyboards, but the arrangement feels spare, and the tempo is surprisingly quick.

Track 3: “One Wing” — Some cool guitar work by Nels Cline, a lulling chorus. The blend of Tweedy’s songwriting and the guitar flourishes here feel like a perfected version of what the band was trying to do on the last album, Sky Blue Sky.

Track 4: “Bull Black Nova” — The song starts out all staccato, with Tweedy singing about a car as a piano ticks off repeatedly. There’s something about this that sounds like the 1970s, but then the track veers into some strong guitar soloing — is that a guitar duet between Kline and Tweedy? The song builds into a stranger piece than it seemed at first, like a simple little ditty that’s become an art-rock epic.

Track 5: “You and I” — A classic-sounding Tweedy acoustic ballad. Just a touch of guitar wankery at the end, as the track fades out.

Track 6: “You Never Know” — More of that 1970s feeling, a pop song with a chorus that sounds like something Harry Nilsson might have done, with a touch of George Harrison slide guitar at one point.

Track 7: “Disappeared” — Tweedy softly singing high notes over a subtle arrangement with piano as the lead instrument. The chorus has a wistful air that reminds me of “Jesus Etc.”

Track 8: “Solitaire” Acoustic guitar and space-rock keyboard sounds blend together in a beautiful opening. Tweedy sings an instantly catchy melody with lyrics that are probably going to stick in my mind as well: “Once I thought the world was crazy…”

Track 9: “I’ll Fight” — Starts off like a solo acoustic folk song, but then the band kicks in and Tweedy chants an insistent, simple melody. Feels a bit like an anthem, but it’s tamped down, without the fist-pumping chorus it could have had.

Track 10: “Sonny Feeling” — An upbeat track, with the sort of shifting instrumentation that Wilco’s big ensemble of musicians can pull off like few other bands.

Track 11: “Everlasting Everything” — Tweedy sings, “Everything alive must die…” Touches of George Harrison’s “All Things Must Pass”? This has the feel of a big album-closing ballad. The record ends with just a little bit of psychedelic guitar with that backwards-sounding sound.

Overall, a good first impression. But I doubt if Wilco (The Album) will become the Wilco album that defines the band for me.