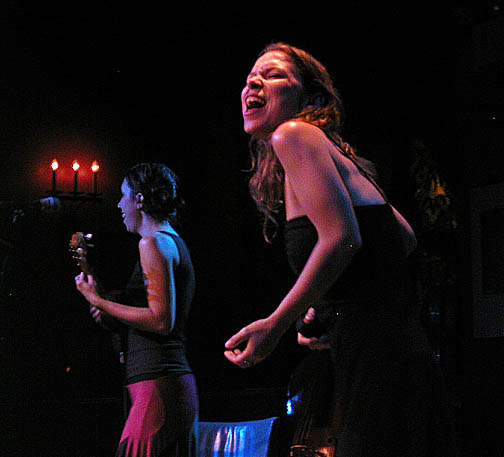 The music world has lost another one of its great artists, singer Lhasa De Sela. I felt like she never received the attention she deserved, perhaps because her music was hard to categorize. She released only three albums over the past 12 years, but all three of them were gems, and I highly recommend them all.

I had one chance to see her in concert, on Oct. 3, 2005, at the HotHouse in Chicago. Here’s what I wrote at the time: “Lhasa did not disappoint in concert, commanding the attention of a crowded room of quiet listeners as she sang with just two musicians backing her up, mostly on guitar and cello. She told a few lengthy stories as introductions to her songs … such a heartfelt and compelling speaker. I love the way she looks when she sings, raising her left hand next to her head, sometimes making a fist and scrunching up her eyes as if she were squeezing the notes out of her head. Simply amazing music.” One of my photos from the concert is above.

Lhasa released her most recent album, titled simply Lhasa, in 2009, and I ranked it at No. 4 on my list of the year’s best records. I was alarmed when I heard that she’d canceled most of her tour dates, citing a serious health issue.

Lhasa’s Web site confirmed her Jan. 1 death with a press release today: “The singer Lhasa de Sela passed away in her Montreal home on the night of January 1st 2010, just before midnight. She succumbed to breast cancer after a twenty-one month long struggle, which she faced with courage and determination. Throughout this difficult period, she continued to touch the lives of those around her with her characteristic grace, beauty and humor.” The press release ends with a poetic note that Lhasa herself probably would have appreciated: “It has snowed more than 40 hours in Montreal since Lhasa’s departure.”

My favorite record by Lhasa is 2004’s The Living Road, and with the news of her death, the haunting song that runs through my mind is the final track on that album, “Soon This Space Will Be Too Small.” Here are the lyrics.

SOON THIS SPACE WILL BE TOO SMALL

(You can hear the song here.)