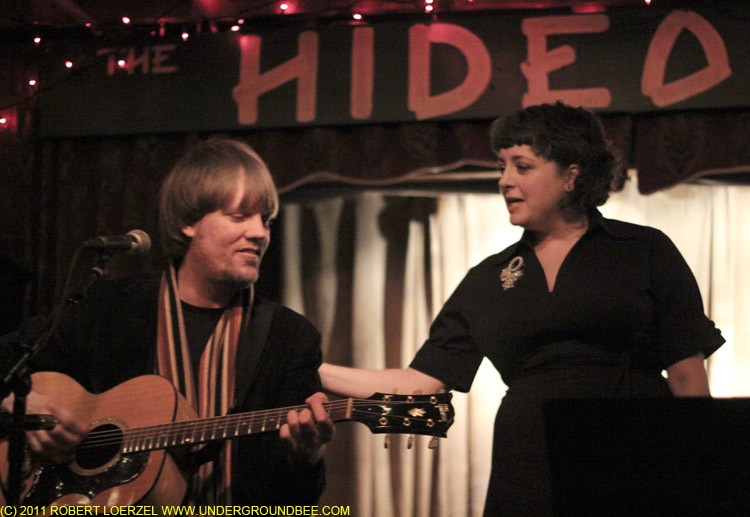 Robbie Fulks took a break from his ongoing, possibly never-ending series of Monday-night concerts at the Hideout this month. Kelly Hogan and Scott Ligon took over the spot in March. This Monday (March 28), they wrapped up their monthlong series of performances with a wonderful, intimate concert, featuring some of the songs Hogan plans to include on a new album.

Yes, a new Kelly Hogan album! It’s been way too long since the last one. And Hogan, who’s always been more of a song interpreter than a songwriter, is getting help from some great musical friends. Hogan and Ligon played several songs — some of them for the first time — that other songwriters gave her for possible inclusion on the new record: “Open Mind” by Jeff Tweedy, “I Like to Keep Myself in Pain” by Robyn Hitchcock, “Haunted” by Jon Langford, “Daddy’s Little Girl” by M. Ward, “We Can’t Have Nice Things” by Andrew Bird (with words by Jack Pendarvis) and “The Green Willow Valley” by the Handsome Family.

The set also included covers of songs by Les Paul and Mary Ford, the Louvin Brothers, the Magnetic Fields, Robbie Fulks, Catherine Irwin, the Everly Brothers, Vic Chesnutt, the Free Design and the Monkees. Scott Ligon played a new song he co-wrote with Terry Adams of NRBQ and his brother Chris Ligon’s hilarious scatological ditty “Poop Ghost.” And there was a wonderful rendition of Glenn Campbell’s old hit “Wichita Lineman.”

Hogan said Ligon is her “enabler,” helping her and encouraging her to make the new record. If the album captures the beautiful sound of their live performance, it will be a keeper.

UPDATE: Here’s some more info on the songs from Ms. Hogan herself. She tells me: “The Catherine Irwin song ‘Dusty Groove’ is also for the record, as is the Mag Fields ‘Plant White Roses’ and Vic Chesnutt’s amazing song ‘Ways of This World’ and Fulks’ awesomely creepy ‘Whenever You’re Out of My Sight.’ I think we did ten of the twelve album songs last night (didn’t get to the Edith Frost and John Wesley Harding ones — dang! we’ve played those every one of the other Mondays though…) I’ll be back in Chicago doing overdubs this summer and hope to squeeze in a few H/O shows then too.”