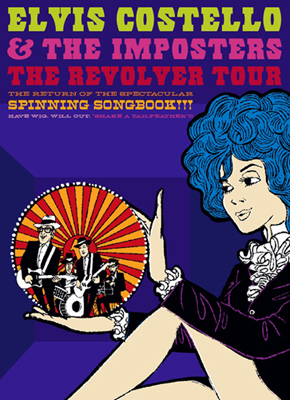 Elvis Costello is billing his current tour as “The Spectacular Spinning Songbook,” and it lived up to that title Sunday (May 15) at the Chicago Theatre. It was indeed pretty spectacular — a highly entertaining show. And it was truly a “show,” not just a typical concert. Reviving a gimmick he featured in a 1980s tour, Costello gave audience members a chance to come up on stage and spin the big wheel, which had about 40 songs or “jackpot” slots on it (each of which would prompt Costello and the Imposters to play a mini set of songs on one theme).

It’s a great vehicle for someone like Costello who has a huge repertoire of great songs to play — giving Costello an excuse to vary up his set list from night to night and to have fun doing it. After the opening set of five songs, Costello put on a top hat and grabbed a cane, shifting into emcee mode. In addition to being an excellent all-around singer-songwriter, Costello is a bit of a ham. Speaking in the grandiose language of a game-show host, with heavy doses of irony, Costello guided Sunday’s audience through a diverse set of songs, letting audience members dance or sit on stage sipping drinks in a “lounge.” The show also featured a go-go dancer in a sort of cage, and a hostess who plucked people out of the audience. During the interludes when the wheel was being spun, the Imposters played instrumental music, including songs such as “Time Is Tight” by Booker T. & the MG’s.

Costello’s set leaned heavily toward his early records, and the Imposters sounded tight as they played driving versions of those classic songs. (Personally, I was thrilled to hear him do one of my favorite songs by him, “Man Out of Time,” from the Imperial Bedroom album.)

Throughout the night, Costello tossed in little bits of other people’s songs — songs that sound similar or share some of the same spirit. During “Uncomplicated,” he played a bit of Junior Walker’s “Shotgun.” During “Alison,” he briefly segued into two different songs by Smokey Robinson and the Miracles, “The Tracks of My Tears” and “The Tears of a Clown.” One of the few songs that Costello radically changed for the live performance was “Pump It Up,” which he played at the piano with a bluesy feeling, adding a couple of verses and choruses from Ray Charles’ “Busted.” Perhaps most surprising was the final song of the night, at the end of a long, satisfying concert: Costello’s iconic version of Nick Lowe’s “(What’s So Funny ’Bout) Peace Love and Understanding” briefly transformed in Prince’s “Purple Rain.” Odd choice, but somehow, he made it work.