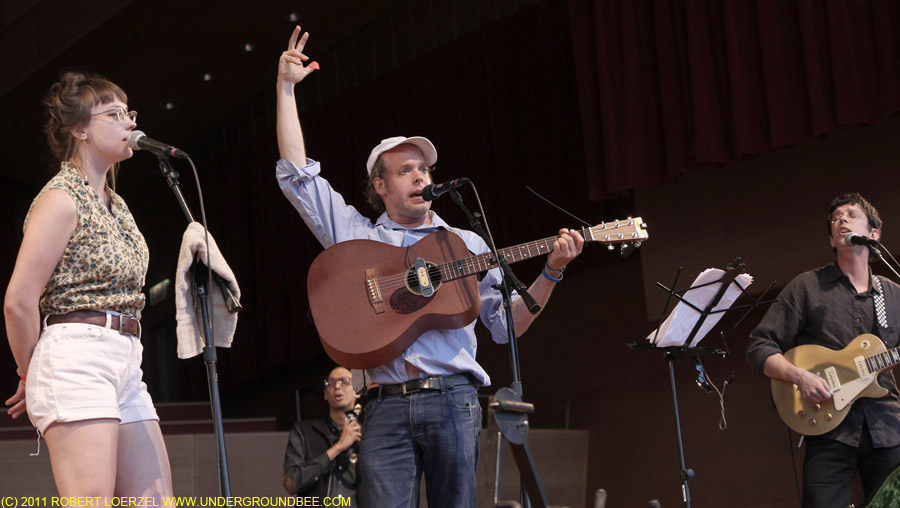 Yes, it is hard to believe sometimes how unusual and wonderful the concerts promoted by the city of Chicago in the beautiful Millennium Park are. The summer season of free concerts got started Monday night (May 23) with … Bonnie “Prince” Billy? And Eleventh Dream Day as the opening act?

I love both of these acts, but they’re not exactly superstars or even what most people would think of as mainstream crowd pleasers. But over the past few years, the programmers in the city’s Department of Cultural Affairs have proven that they’ve got good taste and they’re willing to take risks. There’s been a shakeup since last fall, and I’m still trying to make sense of what it means that the city has moved around jobs and transferred some of these responsibilities to the tourism office. So far, so good — interesting and cool music is still being booked at the Pritzker Pavilion in Millennium Park. Let’s keep our fingers crossed that it stays this way in the months and years to come. (Check out this summer’s concert schedule at Millennium Park here.)

The first act of the night Monday was Chicago’s venerable but still very lively indie-rock band Eleventh Dream Day, although it was questionable for a while whether they would actually play. Drummer and harmony vocalist Janet Beveridge Bean broke an ankle Sunday, and initially the band was planning to cancel the gig as a result. But Jim Elkington (who was in the Zincs and collaborated with Bean in the Horse’s Ha) was recruited to fill in on drums. Bean came out onto the stage in crutches and stood at her own mini drum set, singing throughout the set and offering some backup percussion. Elkington sounded pretty good, considering he’d just had one chance to rehearse the songs. It wasn’t quite the full Eleventh Dream Day experience, but the songs still sounded pretty great … and it made for an unusual and unique show. Bean joked that she was worried about keeping her job with the band. I don’t think there’s any need for her to worry about that, as her vocals came through as strong as ever Monday night. 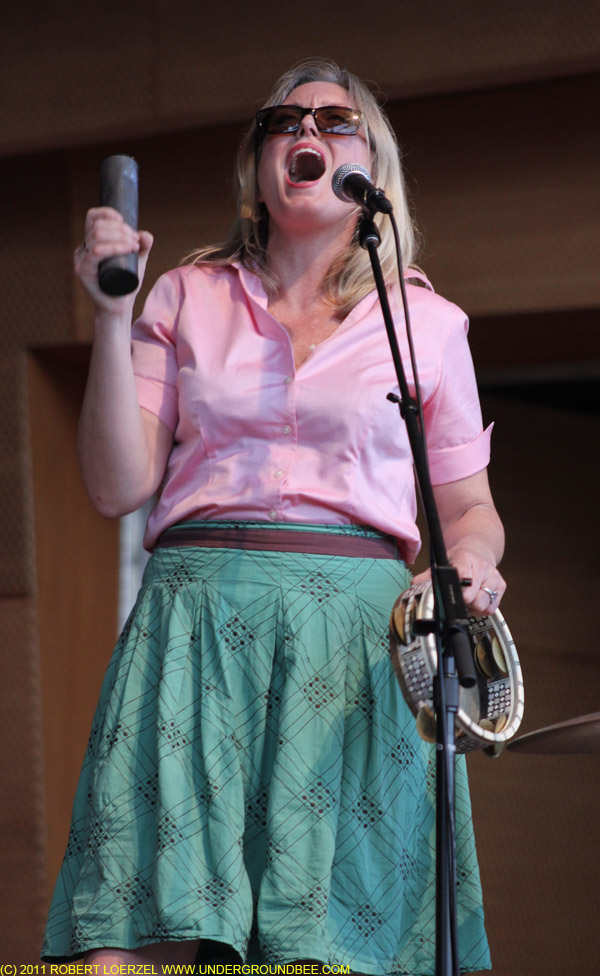 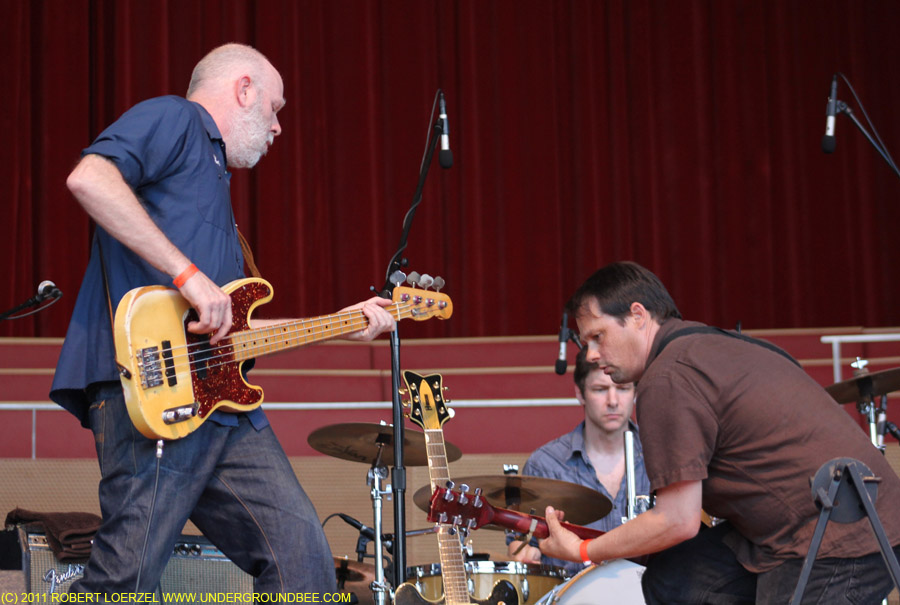 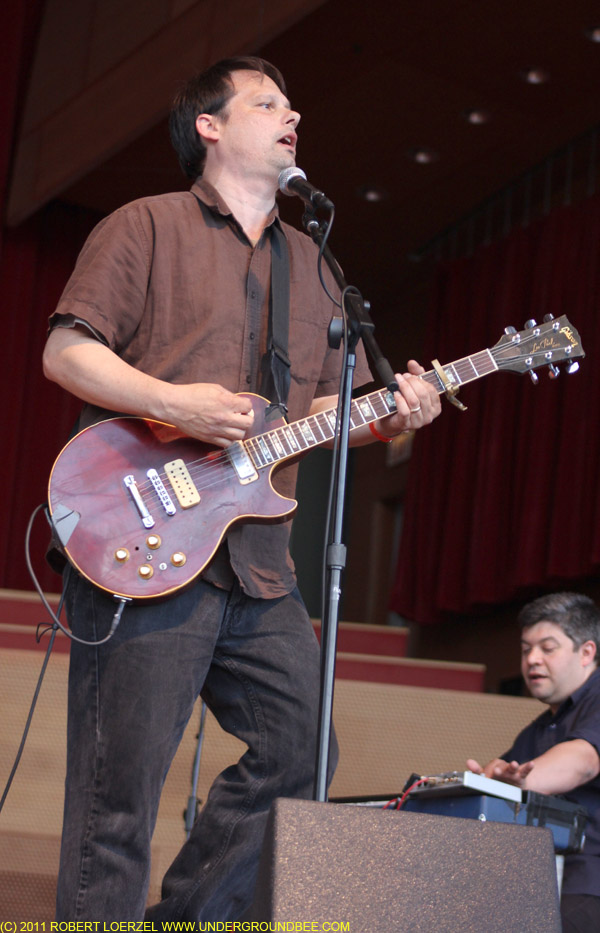 Bonnie “Prince” Billy, aka Will Oldham, performed Monday with the same band he’s had with him last year, the Cairo Gang, which is led by guitarist Emmett Kelly of Chicago, and also includes Chicago singer Angel Olsen. Oldham was a bit more mellow than he’s been the past few times I’ve seen him, but he was just as expressive with his oddball yoga/dance moves, lifting his bare foot at skewed angles while he sang, cradling his guitar in his hands when he wasn’t playing it.

Unless I failed to recognize some of the songs (which is certainly possible, given how many records Oldham has put out), I believe that the bulk of songs he played Monday were brand-new ones, not yet released. He opened with “Troublesome Houses,” off of 2010’s Wonder Show of the World, and played another song from that same terrific album, “Go Folks, Go” just before the encore. But everything in between seemed to be new, with Oldham using lyrics sheets. The songs tended toward the quiet, with lyrics about spiritual seeking as well as the casual references to sex we’ve come to expect. At one point, he warned the audience to clap hands over the ears of anyone children in attendance, then proceeded to sing, “As boys, we fucked each other.” Another song mentioned sweaty thighs locked together. The first of the new songs he performed was almost a solo a cappella performance, with just a few eerie accents from the Steinway piano and the upright bass. The audience in the section of the pavilion near the stage fell almost completely silent as Oldham delivered this melody from the peculiar depths of his throat.

In its loveliest moments, the new material built to gospel-like choruses and impressive three-part harmonies featuring Oldham, Olsen and Kelly. More listens will be needed to decide how the new songs stack up — Oldham’s work usually needs repeat listens before it clicks with me — but it was a daring and beautiful performance. I was wondering what the people in the audience less familiar with Oldham’s work made of it all. It was steady, low-key folk-rock with tinges of jazz and gospel, the sort of music that requires close listening. Did it win over the audience or were people scratching their heads? It’s impossible for anyone to tell what everyone else is thinking in a crowd, but I got the sense that people were at least respectful and intrigued by what they were hearing.

During the encore, Bonnie “Prince” Billy played “There Is No God,” a single he’s releasing June 12 on Drag City, with profits going to Save Our Gulf and Turtle Hospital to support efforts to clean up and maintain waterways — a good cause, in the wake of the recent flooding along the Mississippi River basin. (Watch the video here.) After sounding spiritual in other songs earlier in the evening, Oldham now declared bluntly, “There is no god.” But the declaration wasn’t quite that simple. “There is no god,” he sang, “But that which surround the tongue/That which sees love in the chest/That which puts mouth on cock and vagina/That that is the best.” In his own odd way, Oldham reminds me of poets like Walt Whitman.

His occasionally vulgar lyrics made the spectacle of the concert in the park seem all the more subversive… or surreal, anyway. So the city of Chicago is paying this guy to stand in his bare feet on that fancy stage designed by Frank Gehry and blurt out lyrics about cocks and vaginas and sweaty thighs and how god doesn’t exist? Yep. Pretty cool, isn’t it? 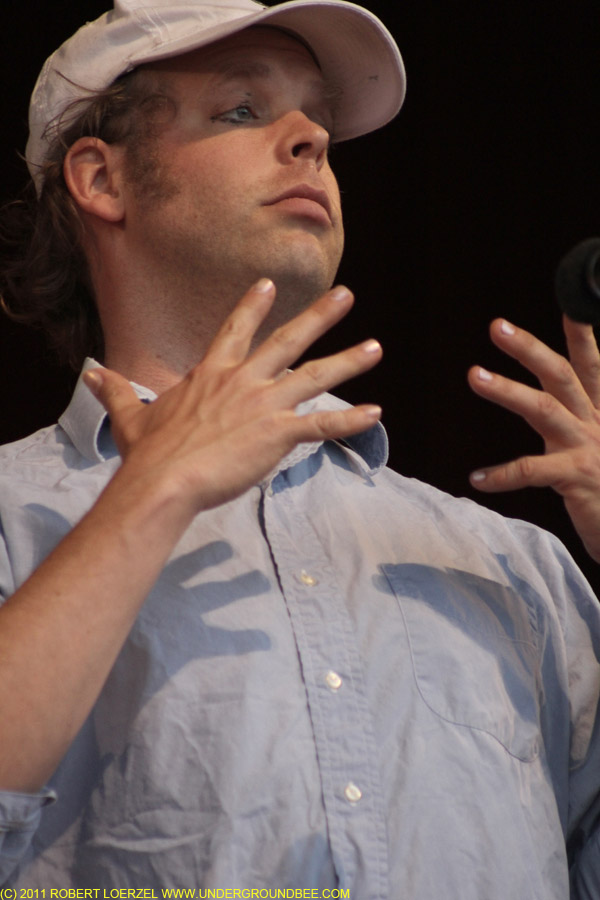 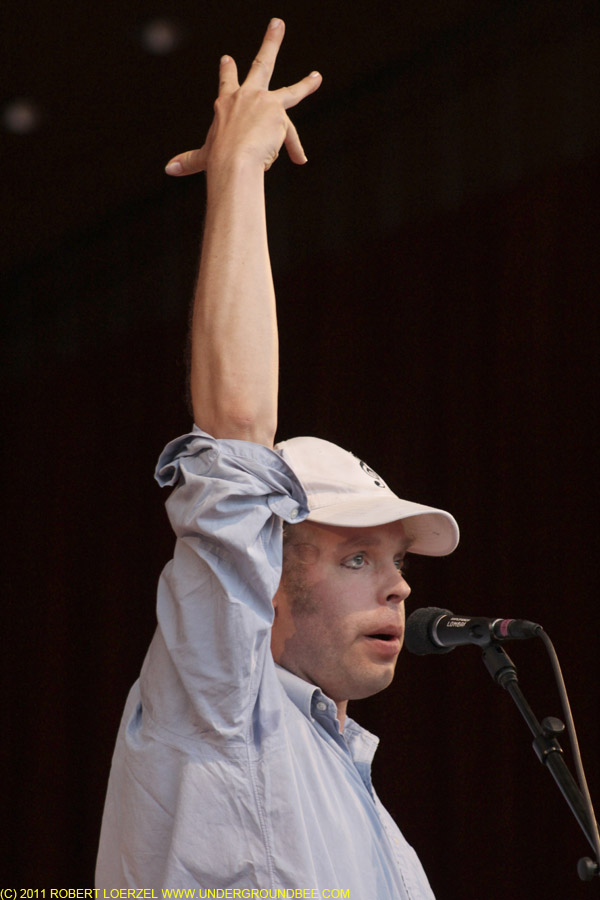 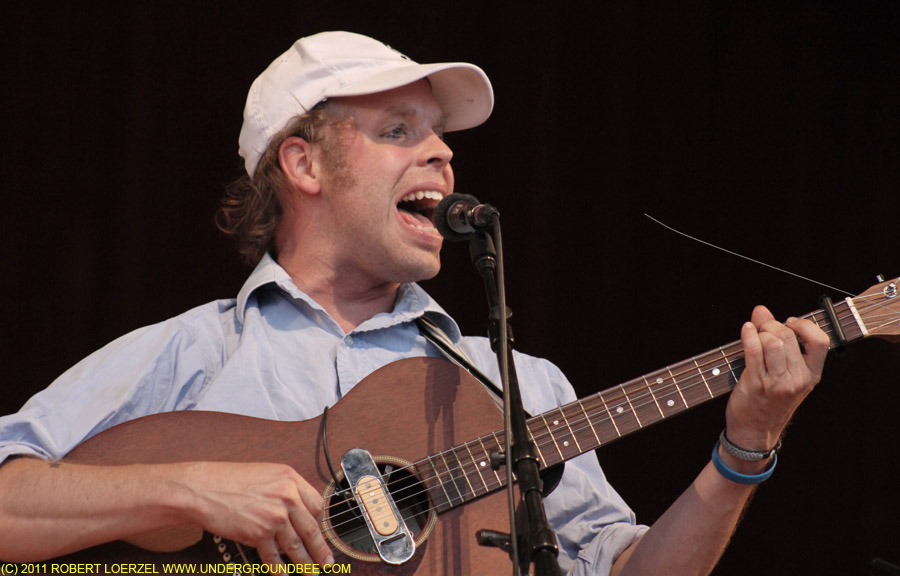 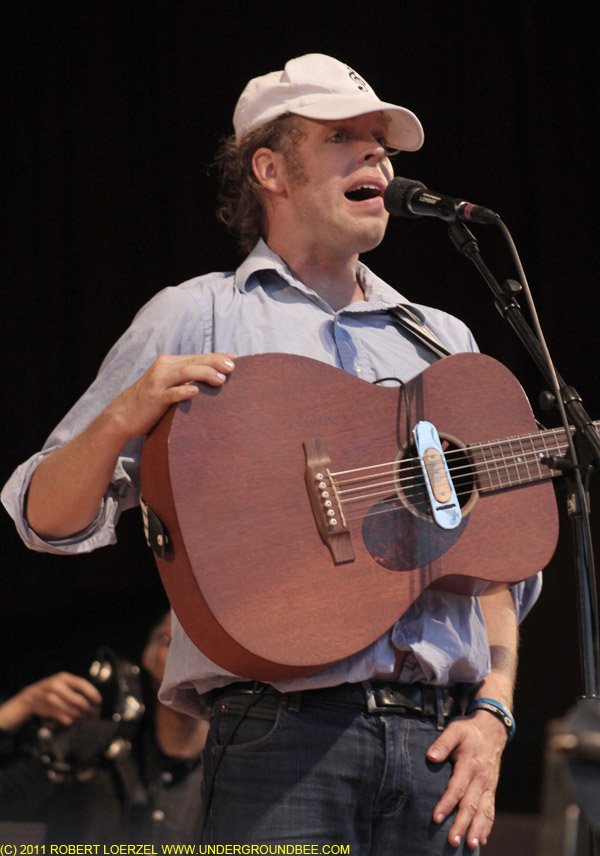 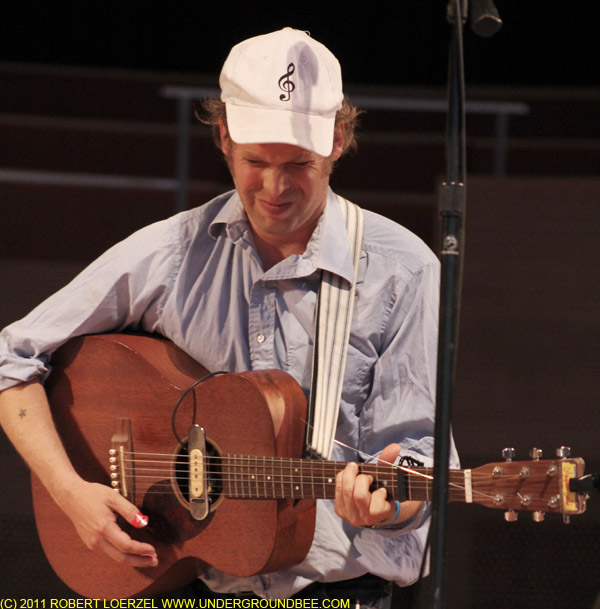 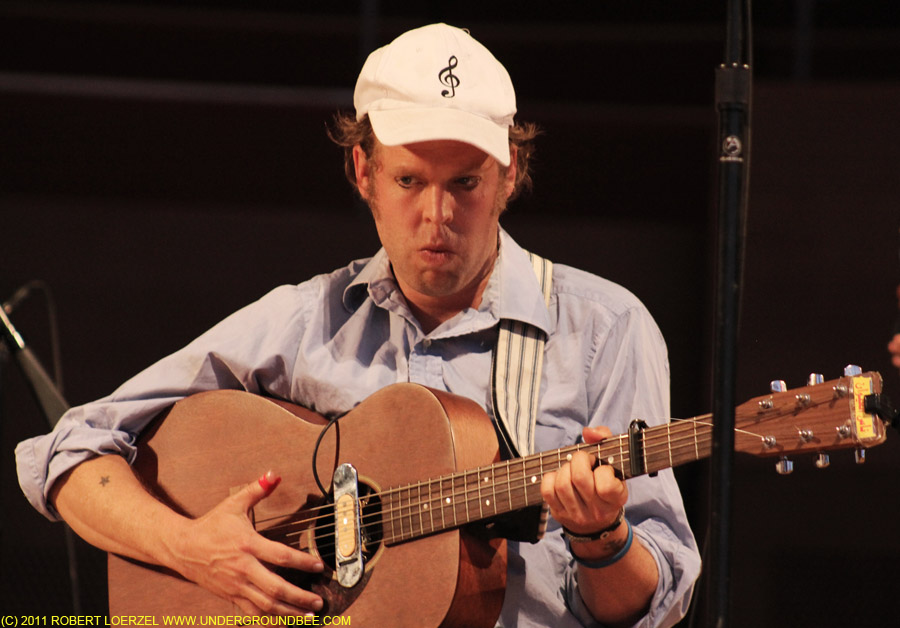 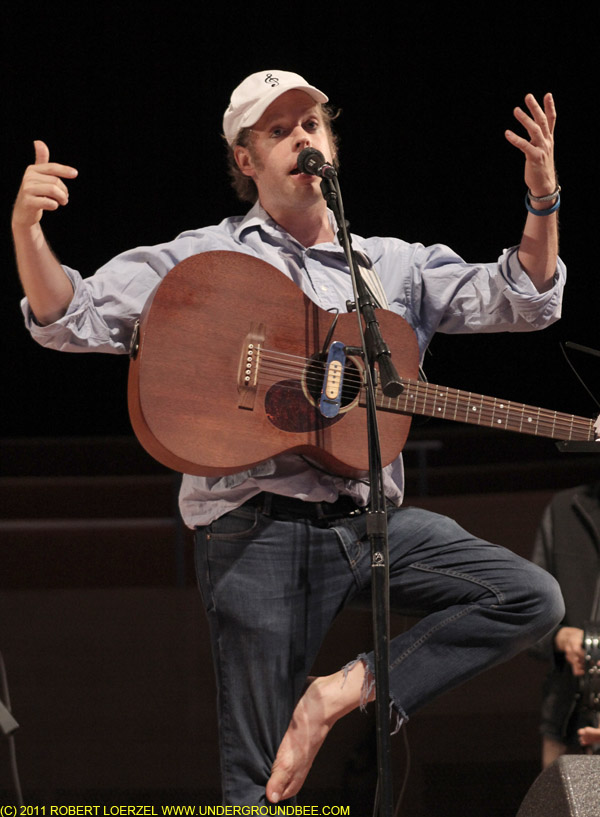 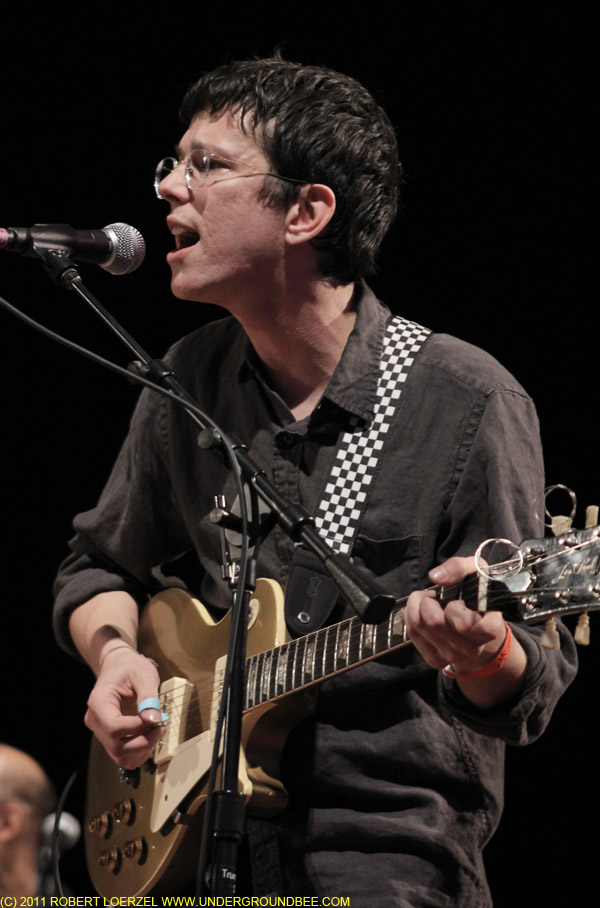 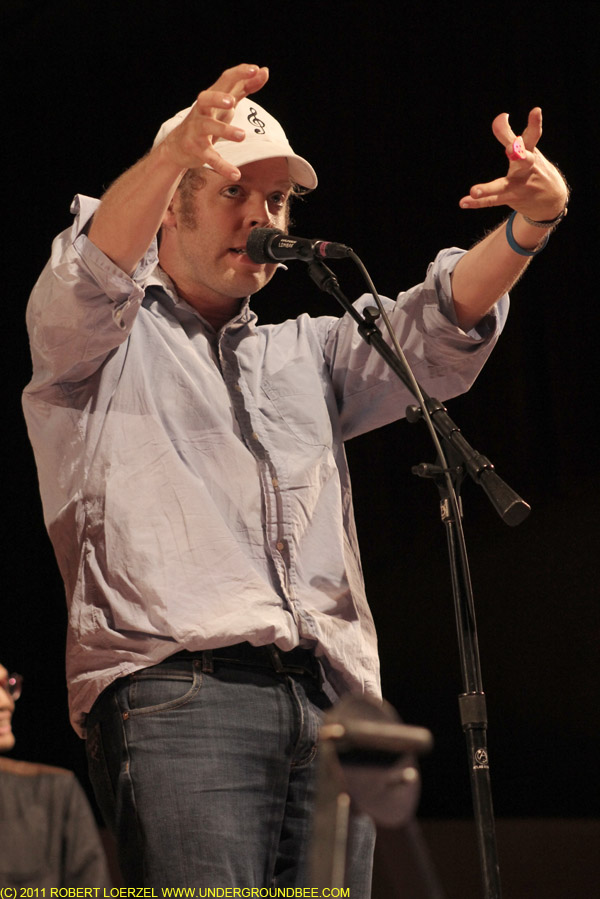 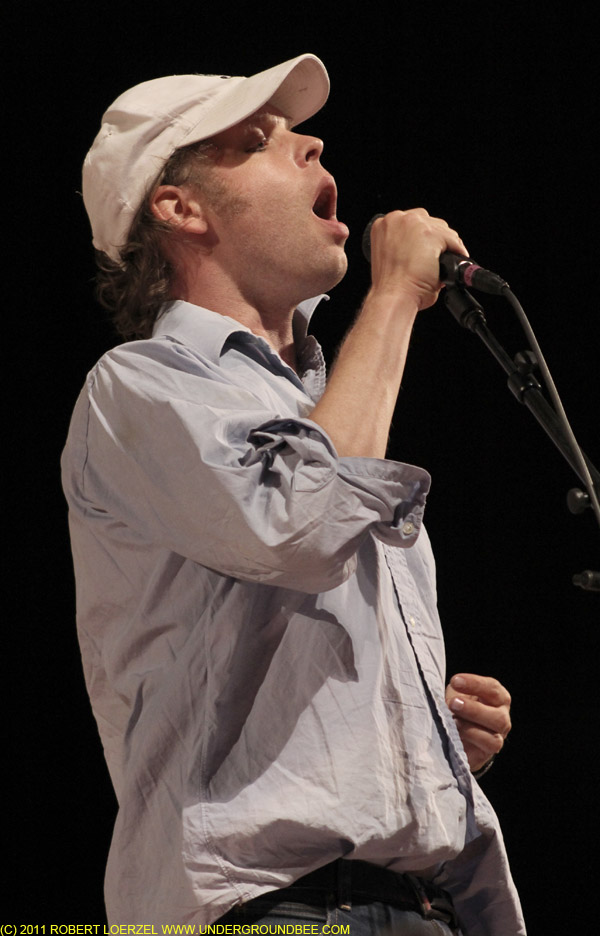 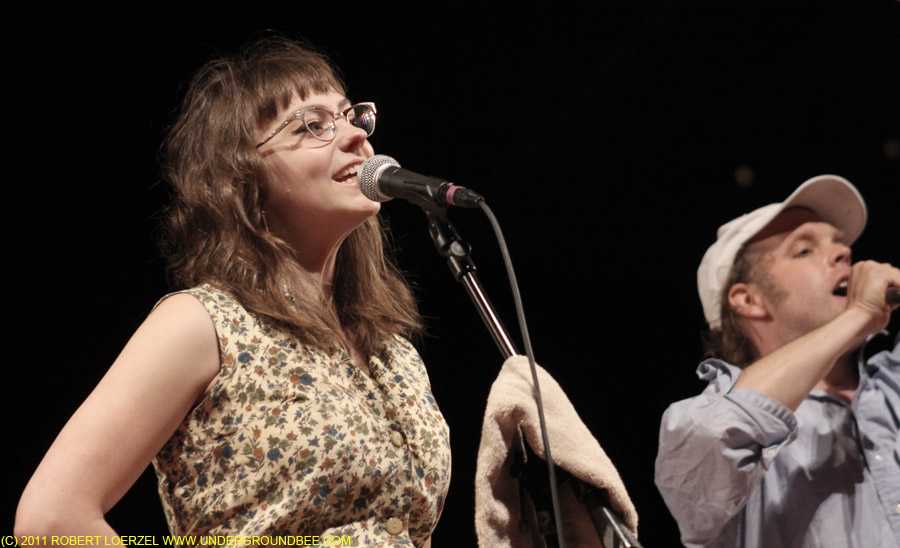