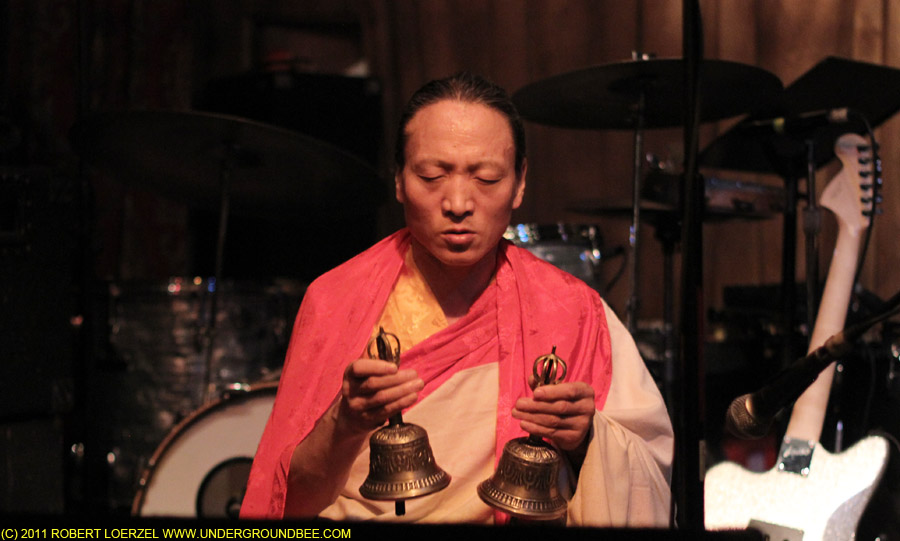 Singer-songwriter Diane Izzo, a former Chicagoan, died of cancer in February at the age of 43. Many of her friends and musical collaborators gathered Sunday (Oct. 2) at the Hideout for a concert billed as “the First Annual Diane Izzo Memorial Concert.” The poster for the concert also featured a title taken from one of Izzo’s lyrics: “Yeah, we’re pitiful but we’re gods.” I missed the first set of the evening (with Crooked Mouth String Band and Beau O’Reilly & Jenny Magnus) but arrived in time for a beautiful and moving ritual performed by a Buddhist monk blowing into conch shells and horns and ringing gongs and bells. And then Hideout owner Tim Tuten got choked up as he recited the lyrics from the song “O Death,” which Izzo had performed with the Pine Valley Cosmonauts. As Tuten noted, that was part of an effort to repeal the death penalty, and this year, Illinois did just that.

After a spoken-word performance by Cheryl Trykv came the centerpiece of the evening: a performance by Friends of Diane Izzo. Jim Becker, other members of Califone and a revolving set of musicians functioned as the band, while various singers stepped up to the microphone and performed Izzo’s songs. It was a true celebration of her life and music.

The evening closed out with sets by Souled American and Califone. Souled American played a sort of alt-country in the 1980s and early ’90s — before it was widely known as alt-country — but haven’t released an album since 1992. On Sunday, Souled American sounded as creaky and ramshackle as ever, playing loose, shaggy folk-rock songs.

Califone played with heightened intensity, perhaps inspired by the occasion. A highlight was a cover of the Izzo song “Freight Train,” which Califone stretched out into a meditative epic, with Tim Rutili playing a single note on his guitar that sounded positively monumental as it pierced the air. When the song finally died down, he remarked, “I just want to play one note now.”