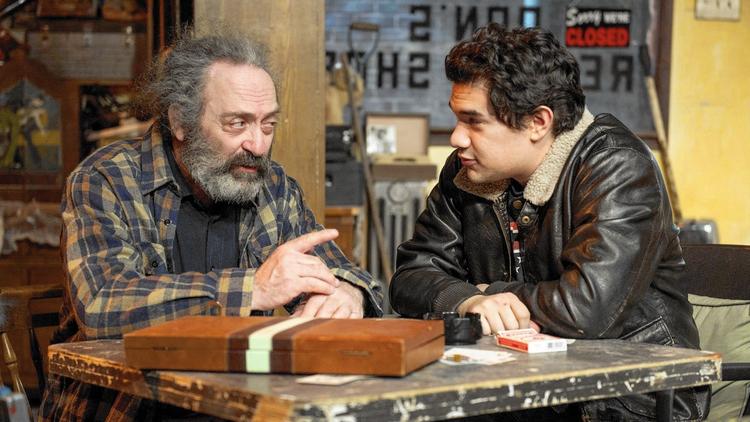 It’s sad to see Mary-Arrchie Theatre closing after 30 years – but the company has chosen what may be the perfect play for its farewell: David Mamet’s American Buffalo. Written in 1975, it’s one of the all-time classic plays about Chicago. And the drama’s setting — a cluttered junk shop — is a good match for Mary-Arrchie and its Angel Island venue. That’s not to say that the theater (which was doomed by redevelopment plans) is a junk shop, exactly. But it has always been one of those quintessentially Chicago theater spaces that are rough around the edges, the sort of spot that feels a little claustrophobic, crammed into rooms that weren’t designed with state-of-the-art theatrical productions in the architect’s mind. One of the most memorable Mary-Arrchie shows of recent years was a terrific 2012 production of The Glass Menagerie; the dinginess of the set and the rustic theater heightened the sense that Tennessee Williams’ characters were trapped in a world startlingly different from their visions of what it should be.

Richard Cotovsky, the guy who’s been running Mary-Arrchie for the past three decades even as he insisted on keeping his day job as a pharmacist in Rogers Park, is acting in his theater’s final show, directed by Carlos Lorenzo Garcia. Cotovsky plays Don, the somewhat taciturn guy who runs the junk shop in American Buffalo. It’s the least showy of the three roles in Mamet’s drama, and Cotovsky occupies it with a thoughtful air that hints at his character’s unspoken depths.

Rudy Galvan brings nervous eagerness and naivete to the role of Bobby, the youngster who trying to earn the respect of his elders in the junk shop — so that he can make some money from their criminal schemes. And Stephen Walker plays Teach, the most outlandish, outspoken member of this trio, playing the character with all of the tense paranoia and desperation it requires.

The escapade they’re plotting — the burglary of a coin collection — drives the drama in American Buffalo, but it’s what Alfred Hitchcock called a MacGuffin: something pursued by a story’s protagonists, which is less important than the pursuit itself. The coins are not really the point in American Buffalo. It’s more about what these characters go through as they plan out their ill-considered crime. In the explosive final scene, the junk shop’s shelves and bric-a-brac nearly come down on top of these three troubled souls. And appropriately enough, it almost feels like the actors are trashing the theater itself — like rock musicians smashing their guitars at the end of a thrilling concert.