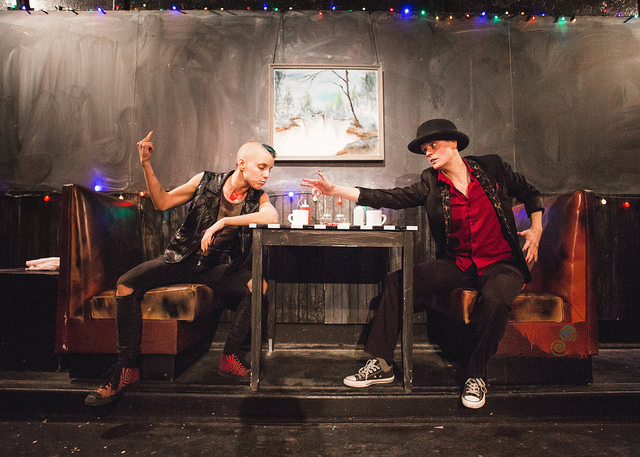 Pop Waits, the title of the new show by Chicago’s Neo-Futurists, combines the names of two iconic musicians: Iggy Pop and Tom Waits. The idea of throwing them together into one work of theater might seem a bit odd, but the Neo-Futurists’ shows are always a bit odd. And in many ways, Pop Waits is the sort of show that this group is known for: a hodgepodge that mashes together wildly different subjects and styles of performance, along with a high level of self-awareness and self-reference. And staying true to the principles of the Neo-Futurists, Pop Waits features performers playing themselves, directly addressing the audience as the people they actually are, as opposed to fictional characters.

The co-creators and co-stars of this show are Malic White and Molly Brennan, who explore the way they use music as a tool for coping with depression and feeling affirmation. White’s touchstone is the music of Iggy Pop — performed during the play with a rock band — while Brennan is inspired by the songs of Tom Waits.

The Neo-Futurists ran into a hitch with their plans just a few days before opening night, however. As the program explains — and as the performers themselves explained during the show — they failed to get permission from Waits to use his songs. Their request apparently didn’t get through to Waits or Waits’ management in time. So they ended up using a few songs that Brennan herself wrote in the style of Waits, alongside the actual Iggy Pop tunes. That makes for a somewhat awkward mismatch, although it actually makes the music more personal and relevant to Brennan’s autobiographical performance. (And rather than sounding bitter about the situation, the Neo-Futurists encouraged audience members to buy Waits’ music.)

The musical performances are lively — with White diving into the role of crowd-surfing punk rocker and Brennan reveling in gravelly voiced singing.  The show starts off with a fun participatory bit involving the audience helping the performers to write a new song. And it’s touching to hear White and Brennan tell the story of how they became romantic partners. It all feels cobbled together, like a rough draft, however. (For better or worse, this is true of many shows by the Neo-Futurists, who are most famous for their ever-changing collection of micro-plays, Too Much Light Makes the Baby Go Blind.)

But then something remarkable happens halfway through Pop Waits: Brennan bravely reveals a painful ailment she has been fighting and the emotional toll it takes on her. Considering that she is renowned for her work on Chicago stages as an avant-garde clown, it was incredible to hear her talk about the difficulties she faces every day.

Pop Waits may not (yet) be a fully realized show, but as a mixture of rock music, clowning and real-life confession, it’s memorable and eye-opening. Watching it on opening night last week, it struck me as the sort of bold and strange show that keeps Chicago’s theater scene so exciting.