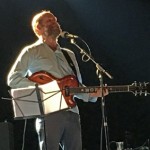 Bonnie “Prince” Billy (aka Will Oldham) returned to Chicago on Feb. 18, playing a concert at the Vic with the same band he played with last summer at the Old Town School of Folk Music — “The Bonny United Ensemble,” comprising Danny Kiely, Van Campbell, Roadie Rodahaffer and Drew Miller.

Oldham was in fine form, hopping around on one leg (as he is wont to do), and mixing in some interesting covers (songs by Bruce Springsteen, R. Kelly, Future Islands, and the Renderers, a New Zealand group). “Crewman/croonman” Oscar Lee Riley Parsons joined him onstage for the Buddy Holly song “Oh Boy,” and the two engaged in some odd almost vaudevillian banter. 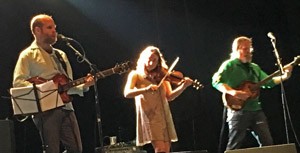 SET LIST: New Whaling / The World’s Greatest (R. Kelly cover) / Easy Does It / Wai / Death to Everyone / For Every Field There’s a Mole / Love Comes to Me / A Dream of the Sea (Renderers cover) / Oh Boy (Buddy Holly cover) / Corner Of The Stair / Thunder Road (Bruce Springsteen cover) / Bed Is for Sleeping / So Far and Here We Are / Rubin and Cherise (Jerry Garcia Band cover) / Intentional Injury / One With The Birds / Quail and Dumplings 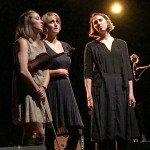 A nice bonus at this concert was the opening act, Maiden Radio, a trio from Oldham’s hometown, Louisville. The three women in Maiden Radio are Joan Shelley (whose solo album Over and Even was my favorite of 2015), Cheyenne Marie Mize (who made an EP of duets with Bonnie “Prince” Billy called Among the Gold in 2009) and Julia Purcell. Together, they sing traditional folk songs — which sounded delightful at the Vic. Maiden Radio also sounds lovely on its 2015 album Wolvering.