Wow… what a night. I’d only seen the Bottle Rockets once before. Saw them a few months ago at the Beat Kitchen after years of intending to see them. Both of these shows were fun rock shows by a tight band.

This one, the last in the series of Gary Schepers benefit concerts, was extra special because of an appearance by a special guest — Jeff Tweedy. Standing as I was near the stage, I couldn’t help noticing Tweedy and his wife, Sue Miller, slipping in through the side door and standing by the edge of the stage. I always feel a little weird spotting someone like that at a concert. Don’t stare. He just wants to have fun like anyone else. So I find myself watching him once in a while from the corner of my eye. He’s watching the concert and clapping between songs like any fan.

Of course, it’s no surprise when Brian Hennemann of the Bottle Rockets invites Tweedy onto the stage late in the concert. For three songs, the BoRox (as they’re known in fan shorthand) become … WilBoRox? Tweedy picks up an electric guitar and they launch into the Neil Young classic “Walk On,” with Tweedy and Hennemann trading lead vocals. Then they do two of the songs that Wilco played on “A.M.,” back when Hennemann was playing guitar with the band: “Passenger Side” and “Casino Queen.” Tweedy looks like he’s having fun.

Henneman said the gaps between his meetings with Tweedy are growing progressively shorter. First, they went, I think he said, five years without seeing each other. Then four. Now it’s been three or two. He joked that they’ll soon be together on a reality TV show, Henneman and Tweedy hanging out in an apartment and writing songs.

Earlier in the show, Henneman had told a story about touring with Uncle Tupelo and having Gary Schepers come on board as the sound man. At their first stop in Denver, Tweedy lined up sleeping quarters at some fan’s house but Schepers insisted, “I don’t sleep on any little girl’s floor,” and so they went to a Motel 6 for the first time — a life-changing event, according to Henneman.

This story came up again when Tweedy took the stage and they reminisced about eating really bad food on the road.

Henneman gave a nice little intro to “Passenger Side,” recalling himself as a kid who could barely cut it in the studio when they recorded that. Tweedy’s expression made it obvious not to take the story too seriously.

Concert performances by “special guests” are often superfluous, but this was clearly a perfect example of how well they can work. This was sort of magical Chicago music moment that I live for.

Now, you may be asking, where are the photos? Well, like an idiot, I did not bring my camera with me to this concert. I’ll never leave home without it again.

Here’s a picture by Chris Constance: 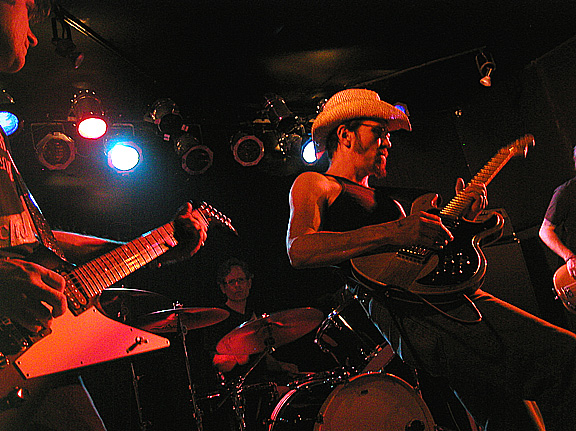