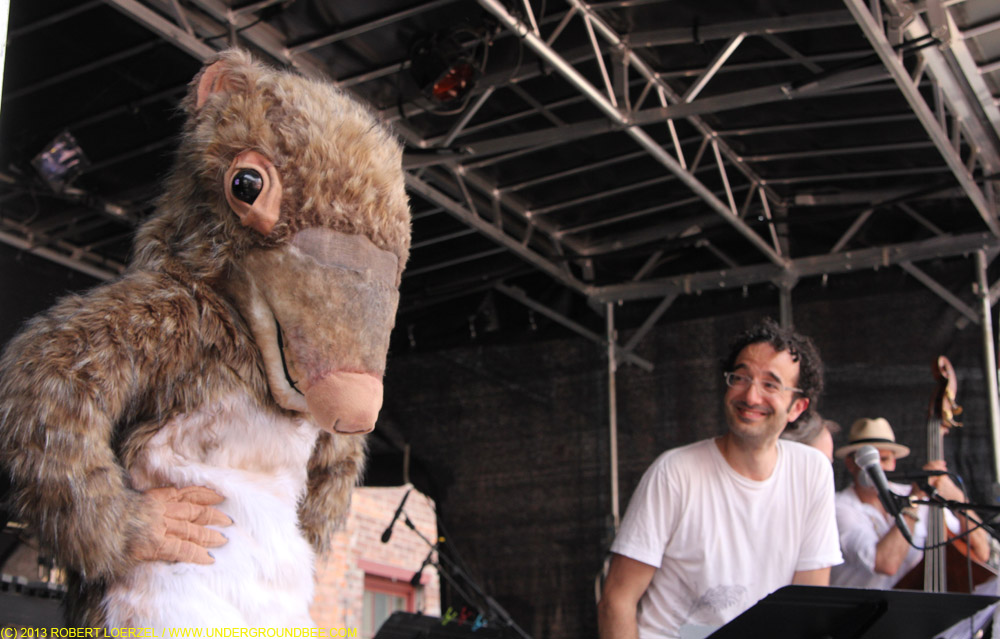 Given the fact that Solid Sound was a festival organized by Wilco, it’s not surprising that it also featured side projects by the band’s various members on Sunday (June 23). The most impressive of these may have been Wilco member Nels Cline’s eloquent, virtuosic guitar duets with Julian Lage. Cline later showed up as one of the guests during the festival-closing set on Sunday night by the jazz trio Medeski Martin & Wood, and he ended up playing for about half of their set, bending and twisting the notes on his guitar in a frenetic style reminiscent of John McLaughlin’s legendary work with the Mahavishnu Orchestra. (Tweedy, Hidalgo and Ribot also sat in on that set at various points.)

Mikael Jorgensen — the keyboardist and electronics whiz who generally sits at the back of the stage during Wilco shows, making himself the least showy member of the band — had a couple of chances at Solid Sound to show off what he does. On Saturday, he generated live electronic analog synth music in a dark museum room, accompanied by longtime Wilco techs Nathaniel Murphy, Travis Thatcher and Josh Goldsmith. I dipped into the performance for a short sample, and it felt like I’d stepped out of the summer festival and into a … well, not a rave, exactly, since no one was dancing. A laboratory?

And then, the following afternoon, Jorgensen took his pulsing electronic music out into the broad daylight, playing a set with Greg O’Keeffe and Oliver Chapoy. I’m not sure if Wilco’s more traditional-music-loving fans knew what to make of it, but the droning noise settled over the museum courtyard like an invasion of cicadas — but with a danceable rhythm.

Another member of Wilco with avant-garde tendencies outside of the band, drummer Glenn Kotche, played as part of the duo On Fillmore, which also includes bassist Darin Gray. But it wasn’t a straightforward concert of their music. Rather, they provided accompaniment for an entertaining live version of the public radio show “Radio Lab,” which featured Jad Abumrad and Robert Krulwich reading from scripts and playing short clips from interviews as Kotche and Gray made sounds to evoke the story of the dinosaurs’ extinction.

While some members of Wilco contribute elements of jazz, electronic and avant-garde music to the mix, John Stirratt and Pat Sansone bring a power pop, classic rock and soft rock sensibility, and that was on full display when they performed as the Autumn Defense. After playing pretty pop songs from their own albums, they closed with a perfect cover of Bob Welch’s 1977 radio hit “Sentimental Lady.”

Meanwhile, the Blisters — a band featuring Jeff Tweedy’s son, Spencer, on drums — also played at Solid Sound. The youngsters got plenty of adults dancing as they rocked out near the end of their noontime Sunday set.