Here, belatedly, are my choices for the best films of 2010. Even now, I feel like I’m not quite ready to decide on my list, since there are several significant, critically praised films I haven’t had a chance to see. But like any year-end list, this is just a snapshot of my opinion at the time. And as always, I faced some bedeviling questions about what qualifies as a 2010 film. I included a few films that played at the Chicago International Film Festival but haven’t shown up yet for regular runs in theaters. And I included a couple of films made in 2010 that finally showed up on Chicago screens in January. And I also tossed in The Secret of Kells, which got an Oscar nomination for the best animated feature of 2009 but didn’t show up in Chicago until 2010.

My list is dominated by foreign and independent films, which were simply more authentic and interesting than the bulk of mainstream movies in 2010. The Social Network, True Grit and the flawed but compelling Inception were near misses for me. I could see putting just about any of the films I ranked 11 to 20 in my top 10 — it’s a strong lot, in my opinion.

I edited together clips from the trailers for my top 10 films into the video below:

As I put these scenes together, it struck me just how violent and unsettling most of these films are — with Another Year and The Secret of Kells being notable exceptions. I didn’t set out to pick films with any sort of theme running through them, but many of these films deftly explore the cruelty that people inflict on one another all too often. 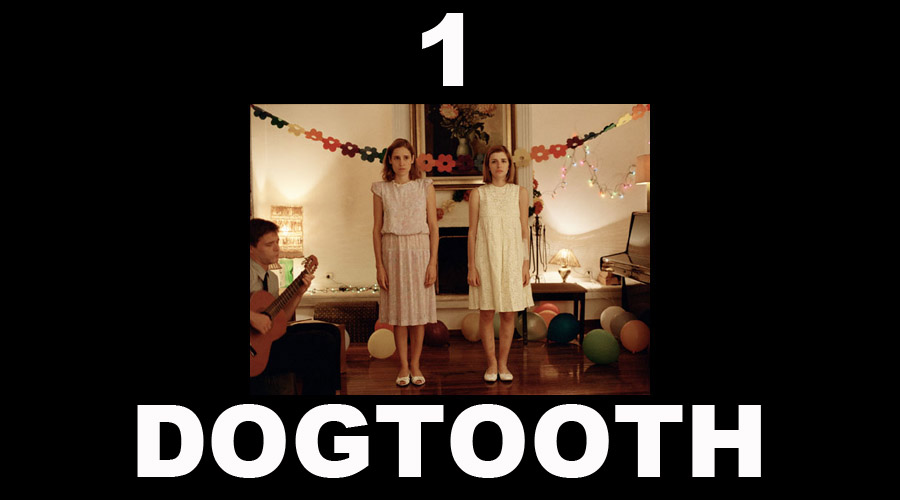 1. DOGTOOTH (Directed by Yorgos Lanthimos, Greece)
Watch it if you dare. This is not an easy film to stomach, but it’s a brilliant depiction of how a closed society can go horribly awry. The society in question here is just one family, with a father who’s determined to shield his children from the outside world — twisting their sense of what’s real and what’s moral. The family unit comes to resemble a religious cult or totalitarian state in miniature. All of this unfolds with dark humor and painful violence. When this Greek film played last March during the Gene Siskel Film Center’s European Union Festival (one of the essential cinematic events each year in Chicago), the sense of shock was palpable in the room. As the closing credits appeared on the screen, a man in the back of the room said, “No! No! No!” — as if he couldn’t take what he had just seen. I turned around and saw a woman in the room behind him, sitting there with her mouth agape — looking a bit like one of those stunned audience members in The Producers witnessing “Springtime for Hitler.” It’s rare to see a film that shocks the system like this one. (Warning: Even the trailer, posted below, is disturbing.) FILM WEBSITE 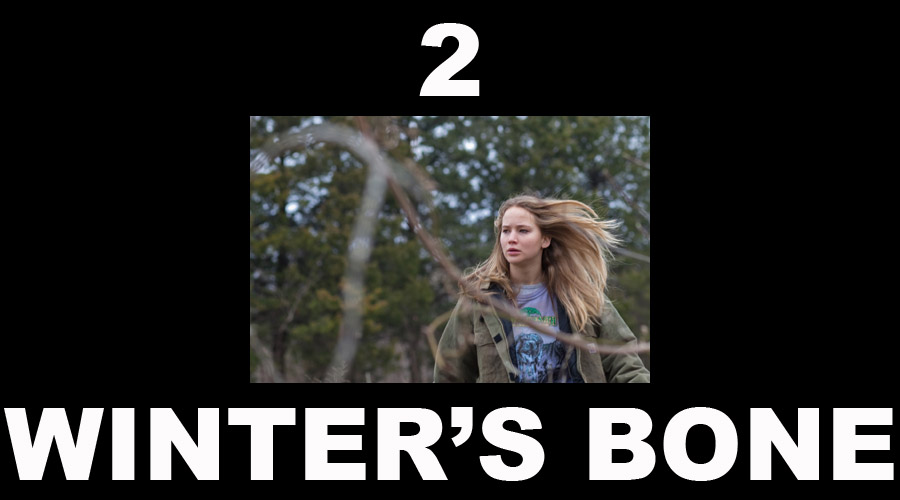 2. WINTER’S BONE (Debra Granik, U.S.)
The best American film of 2010 presented a believable picture of backwoods ravaged by poverty and drugs. Jennifer Lawrence is great as the fierce young woman at the center of this drama, and the rest of the cast is strong, too. FILM WEBSITE 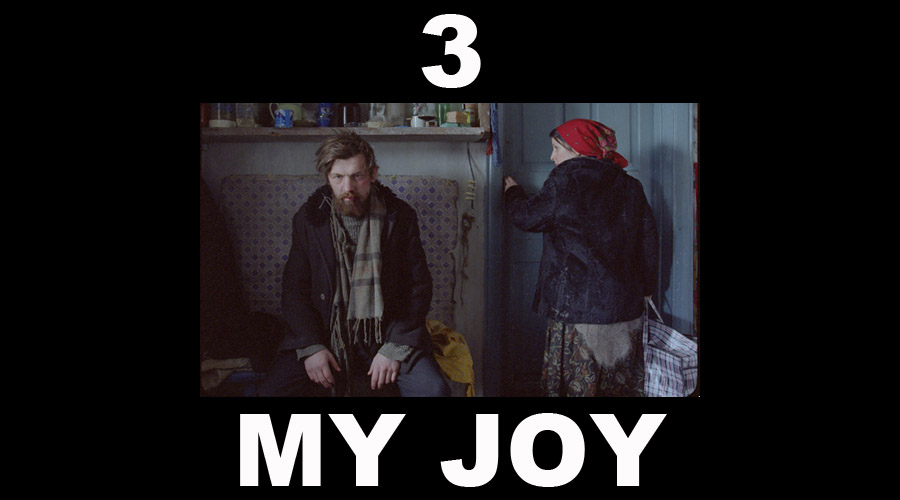 3. MY JOY (Sergei Loznitsa, Russia)
This odd journey through the Russian countryside may seem to meander, but it’s actually following a logical path toward its tragic conclusion. The film, which screened at the Chicago International Film Festival, make a radical break from formulaic screenwriting by going off on surprisingly long tangents — flashbacks to historical events involving some of the characters and places we see in the present day. And the central character goes through a stunning change halfway through the film. It unreels without any obvious explanation, sometimes feeling a bit like the films of the great Soviet-era director Andrei Tarkovsky. My Joy is likely to baffle or bore some viewers, but if you immerse yourself in its world, it’s quite compelling. FILM WEBSITE 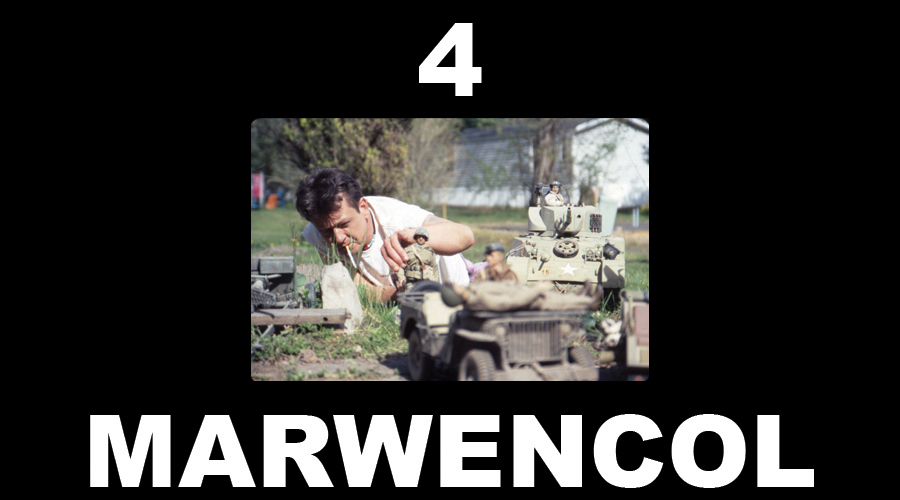 4. MARWENCOL (Jeff Malmberg, U.S.)
A remarkable documentary about Mark Hogancamp, a man recovering from head injuries who constructs a miniature world with dolls — becoming an artist in the process. It’s a moving portrait of someone who doesn’t quite know how to relate to other people in the ways our society considers to be “normal.” FILM WEBSITE 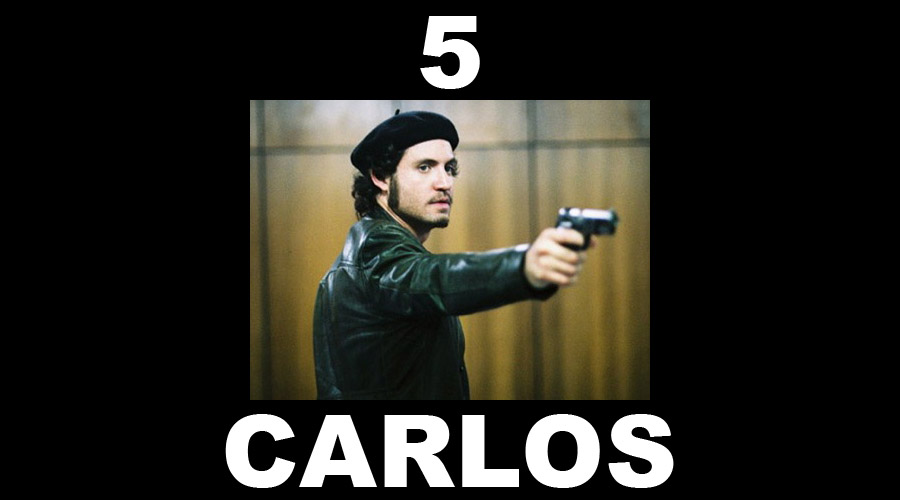 5. CARLOS (Olivier Assayas, France)
See the long version — a five-hour epic biography of one of the most notorious terrorists in modern history. While the dramatic film does not exactly make him a sympathetic figure, it does portray him as human — an egotistical man hungry for his own strange sort of celebrity. The long version of the film never lags, making a strong argument for the notion that some stories deserve to be told on the screen at greater length. FILM WEBSITE 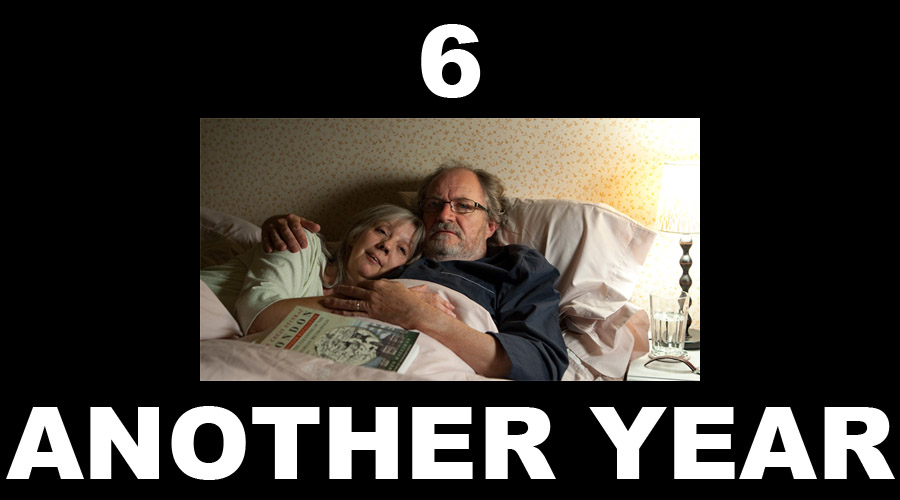 6. ANOTHER YEAR (Mike Leigh, U.K.)
Mike Leigh is quite simply one of the greatest filmmakers of the past few decades, capturing the rhythms and complexity of real life on the screen time and again, using his unique improvisational process of developing stories and characters in collaboration with his actors. Another Year is a subtle film, and at first glance, it may seem understated or even uneventful. But like the best of Leigh’s work, it feels unforced, almost like a documentary showing real people in their everyday lives. As in his last film, Happy-Go-Lucky, Leigh looks at the question of why some people seem to be naturally sunny while others seem cursed with unhappiness — but this time, it’s a more sophisticated study of the topic, with a wider range of characters. The whole cast is excellent, and the film’s emotional undercurrents sneak up on you. FILM WEBSITE 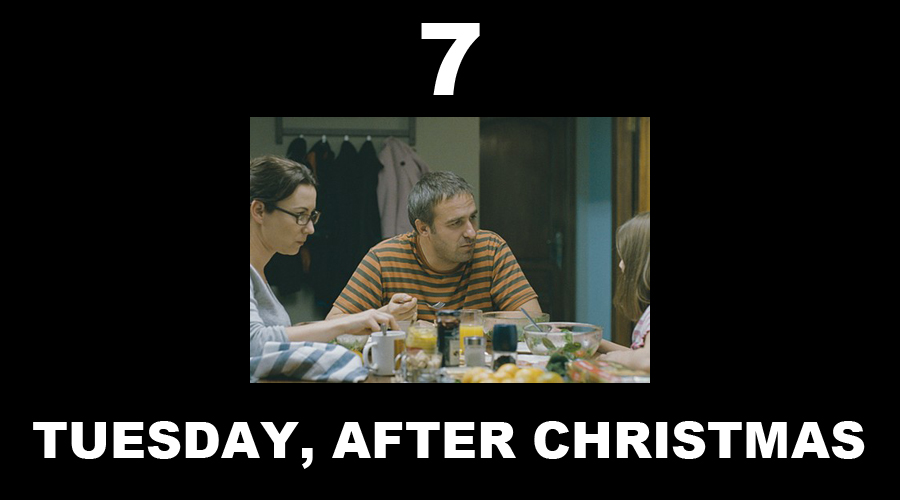 7. TUESDAY, AFTER CHRISTMAS (Radu Muntean, Romania)
This Romanian film about a husband committing adultery — and wrecking what seems like a perfectly fine marriage — feels honest. It doesn’t make any excuses for the man’s behavior, and it vividly shows the consequences of his action. When this film screened at the Chicago International Film Festival with director Radu Muntean in attendance, it sparked angry questions from audience members (mostly from women): Why would this man do something like that? As in real life, there was no easy answer. FILM WEBSITE 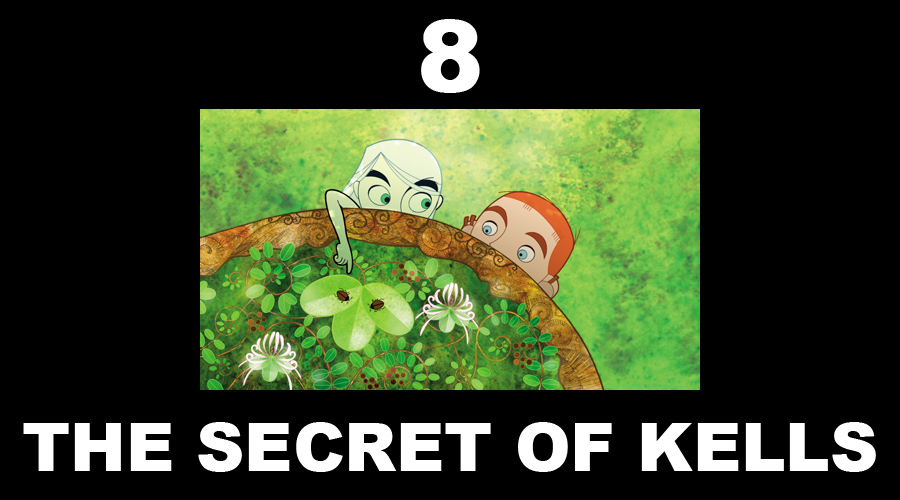 8. THE SECRET OF KELLS (Thom Moore, Ireland)
An amazingly beautiful animated film that draws on old Celtic books and artwork for its singular look. The screen practically bursts with colors and ornamental patterns, as the film tells a charming story inspired by Irish history. FILM WEBSITE 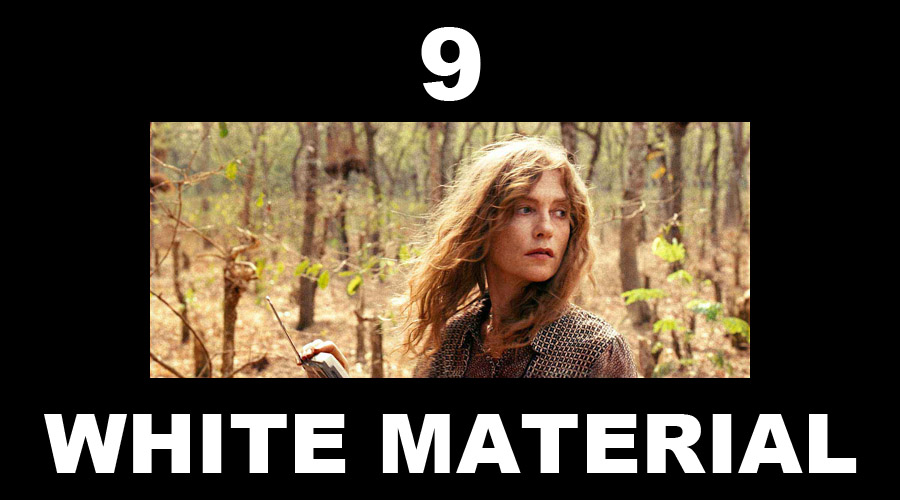 9. WHITE MATERIAL (Claire Denis, France)
Like other films by the great French director Claire Denis, this one doesn’t tell its story in a straight line. It’s a mystery, a montage of scenes flowing like a fever dream, pieces for us to assemble. One of the great actresses of our time, Isabelle Huppert, plays another one of her headstrong anti-heroines, this time in an African countryside exploding with violence. A powerful meditation on post-colonial conflict. FILM WEBSITE 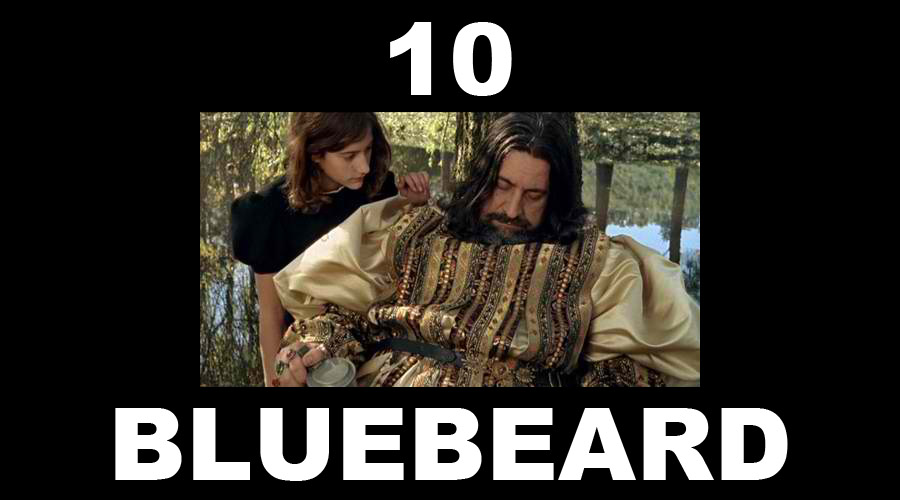 10. BLUEBEARD (Catherine Breillat, France)
That macabre fairy tale concerning the king who has a penchant for killing his wives becomes an oddly compelling feminist fable in the hands of Catherine Breillat. It plays with the sort of understated dialogue that distinguished the films of Robert Bresson, along with a wicked sense of humor. FILM WEBSITE