The concert by Grinderman Monday (Nov. 22) at the Riviera was one of the best I’ve seen this year. Not that this was surprising. Nick Cave hasn’t disappointed me yet in the five times I’ve seen him in concert. Is it possible Cave’s actually become more of a live wire as he’s gotten older? He certainly seems completely uninhibited as he commands the stage.

Monday’s concert was an improvement over the exciting but too short 2007 set by Grinderman at Metro. Now that Cave and his Grinderman mates have two strong albums’ worth of material to draw from, they were able to put on a true full-length concert. Warren Ellis, he of the long and shaggy beard, often went wild on his guitars and violin, making searing hot noises, the sort of solos that are more about one big, scratchy sound than the individual notes. Cave often played guitar, too (something he doesn’t usually do when he’s touring with the full Bad Seeds lineup), as well as grinding out some grimy-sounding notes on the keyboard. But more than anything else, Cave was pushing himself up against the crowd, letting the fans in front touch with him their hands as he spouted his funny, vulgar, erudite and/or raunchy lyrics.

Grinderman’s albums are almost but not quite non-stop rock, and the show was similar, whipping up even more intensity. Cave let out a few more blood-curdling screams than he does in the studio, and his bandmates sang the call-and-response backup vocals like people yelling for help in an emergency. Like a lot of Cave’s music, the Grinderman songs are rooted in the blues, but Cave and his cohort make a twisted, punk sort of blues.

See my photos of Grinderman on the Chicago Reader’s Photo Pit page. 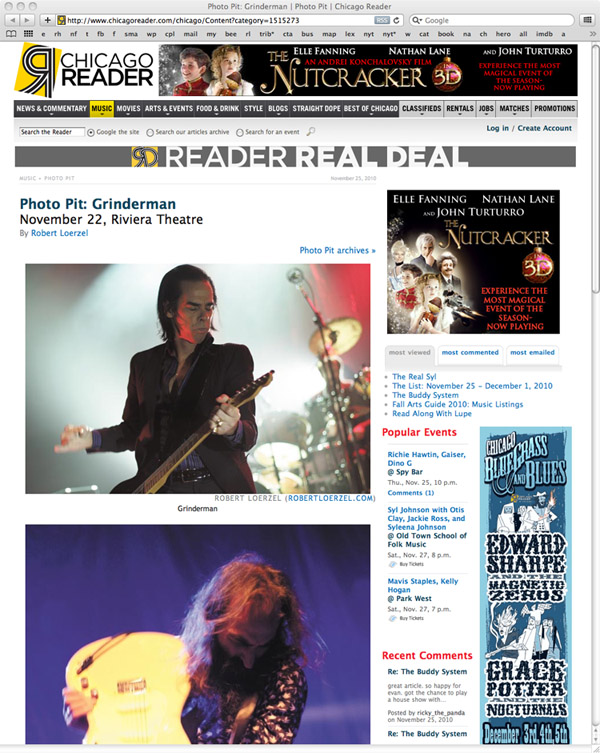