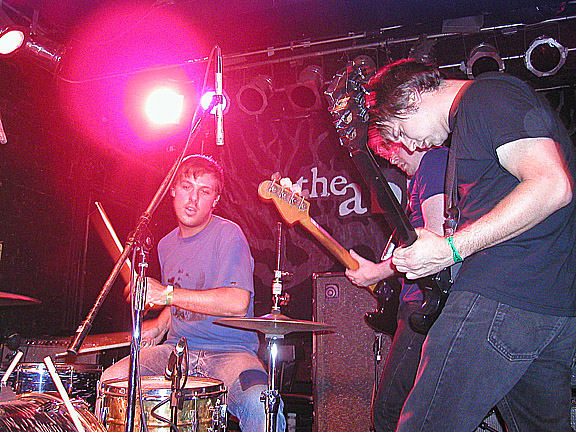 I groaned when I walked up at 9 p.m. and saw a schedule posted on the wall with three opening bands. Three! Oh, well, it’s not as if I had any other place to go, but still…

It turned out to be a smorgasbord of various forms of noisy rock music. First, Plastic Crimewave Sound. I’d seen them once before, and they impressed me a bit more this time, though I’m still not sure they have songs I really want to hear again on CD. The noise style for these guys was to create a Sonic Youth-style wall of noise over rock-pop song structures… I think.

Next was Atomic Bitchwax, which for lack of a better term, plays stoner rock. Or tuneful hard rock. Whatever you want to call it. I’d never heard a note of their music before, but I enjoyed it, and they had a contingent of enthusiastic fans in the Abbey tonight. The drummer was particularly good.

As I was waiting for the next group, a guy standing near the front of the stage asked me, “So, you’re the digital camera guy?”

Next came Growing. I had a feeling what we were in for when the band members lined up about six or seven large amps across the middle of the stage without any drum kit, and then packed lots of pedals and wires from toolboxes. Growing turned out to be a guitarist and bassist playing one long wall of noise — think Metal Machine Music meets that long, drony electronic thing on the last Wilco record. Luckily, this lasted only about 30 minutes, and I didn’t actually mind it as a sort of third course before the main entree of Comets on Fire, but I don’t imagine that I’ll be especially anxious to hear more music by Growing.

As soon as Comets on Fire began playing, that guy who’d asked me about the camera before bashed his way through the crowd and started aggressively swaying against the stage, pushing the monitors and even grabbing one of the cords plugged into the monitors. When he saw me, he stuck out his hand to block one of the photos I was trying to take. Then he got into a shouting match with a photographer standing nearby… A couple of minutes later, security showed up and ejected this clown.

Like Atomic Bitchwax, Comets on Fire were dominated by some gonzo drumming. In fact, the drummer was positioned front and center on the stage. Also unusual was the guy off on the right side of the stage, who was basically twiddling knobs on a pile of electronic gear to make the psychedelic sound effects that permeate Comets on Fire’s music.

As on their fine CD from last year, Blue Cathedral, Comets on Fire played loud and chaotic rock, like a demented version of mid-1970s hard rock. Is it stoner rock? Space rock? I’m not sure. And I’m not sure if I can identify a single word from the shouted lyrics. But I do know I liked it. Comets on Fire rock with unrestrained fury.

SEE PHOTOS OF COMETS ON FIRE.