The rainy weather on Sunday (Aug. 26) seemed at first like it might ruin eighth blackbird‘s plans to perform composer John Luther Adams’ piece “Inuksuit” with a hundred or so musicians in Millennium Park. After all, these musicians weren’t just going to be playing on the Pritzker Pavilion’s stage. The idea of this performance (and Adams’ concept) is that the musicians would perform at various scattered spots all over the park.

Some daring concertgoers took seats in front of the stage, staying dry under the pavilion’s roof, but then one of the ensemble members explained that we’d have to venture out onto the lawn to experience the music in the first section of Adams’ piece. It was hard to tell at first that the music had even begun. Some people carrying umbrellas or wearing ponchos formed a circle in the lawn, watching something and a sound emerged from that circle — the sound of people blowing into seashells.

“Inuksuit” (“a stone landmark or cairn … used by the Inuit, Inupiat, Kalaallit, Yupik, and other peoples of the Arctic region of North America”) had begun. The audience and performers commingled on the grass as a light rain fell, the weather actually adding another element of sound to Adams’ textures, which were designed to evoke the natural world anyway.

First came the hornlike sound of seashells. And then people waved plastic tubes, making a high-pitched hum. Then came a clatter of drums from all over the lawn. And then other participants began cranking hand-operated sirens. What had begun like an atmospheric backdrop of sounds recorded on a beach sounded like a man-made thunderstorm, complete with sirens warning us all to take shelter. And almost as soon as “Inuksuit” reached this dramatic sensation of alarm, the rain really began to pour down. As it happened, the drummers assembled in front of the stage were playing now, which made it a convenient time to seek shelter up there.

I couldn’t see what happened to the musicians out on the lawn after this — how many of them stayed out there. Adams’ layers of percussion eventually gave way to a tranquil coda of glockenspiels dueling with bird-mimicking piccolos. The peaceful ending of this stormy composition lingered awhile, finally fading into silence. Silence except for the ambient sound of that rain, which was still coming down hard. The audience paused. If others were thinking the same thing as me, they were uncertain whether the music had actually ended. Finally, someone shouted “Bravo!” and the crowd gave the performers a rousing ovation. It felt like we had been part of the performance. 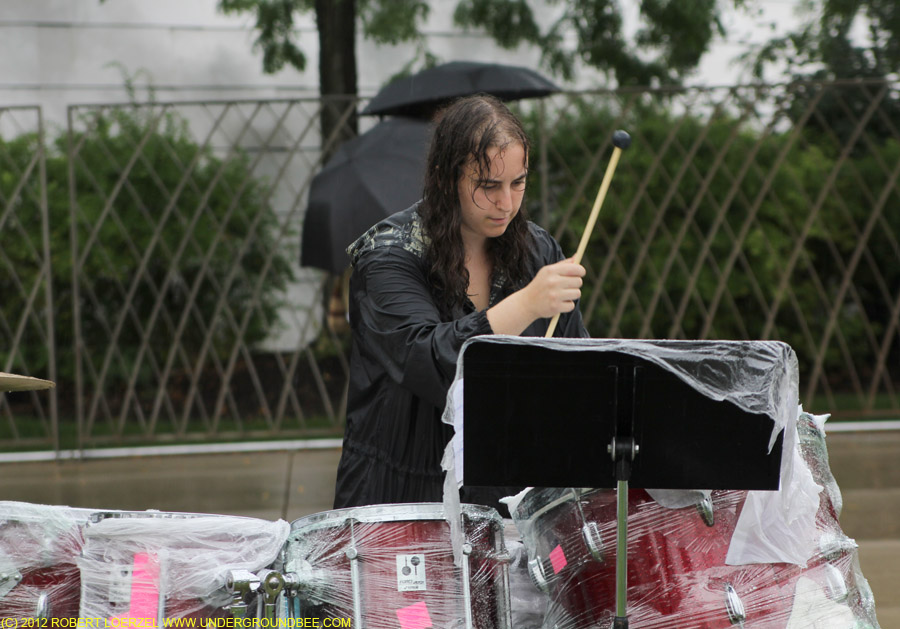