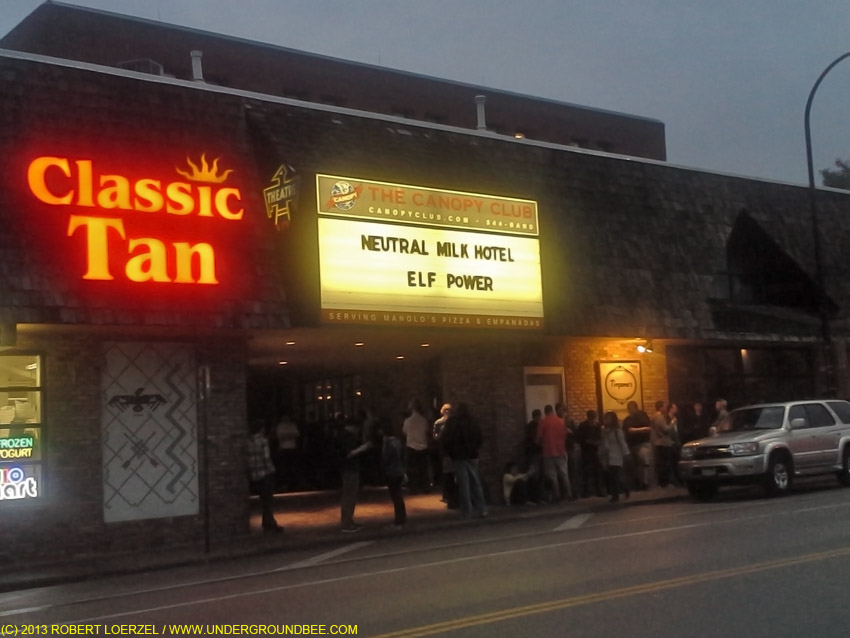 Jeff Mangum is surrounded by mystique. He’s one of those musicians who stop making music and giving interviews, causing people to wonder and worship. None of that matters if the music isn’t good. In Mangum’s case, the last music he made before he seemed to fall off the face of the earth was a masterpiece, the 1998 Neutral Milk Hotel album In the Aeroplane Over the Sea. In the 14 years since it was released, the album has gained a well-deserved cult following.

The enduring strength of the songs on Aeroplane is clear now that Mangum has finally emerged to play concerts. He delivered powerful performances of that Areoplane material and a few other Neutral Milk Hotel songs when I saw him Monday, Feb. 6, at the Athenaeum Theatre in Chicago and Wednesday, Feb. 8, at the Pabst Theatre in Milwaukee.

Other than a few moments when other musicians joined him onstage to blow horns, bang drums or bow cello strings, the shows consisted entirely of Mangum sitting down on a chair, strumming acoustic guitars and singing. Mangum has one of those loud, proclaiming folk-singer voices — early Bob Dylan filtered through the droning British accent of John Lennon, with a touch of Syd Barrett — and his singing has changed very little in the years he’s been missing. Mangum showed that he’s capable of subtlety with a few, quieter turns of phrase, but he was more interested in belting out notes for the whole world to hear. When he slipped into wordless phrases, singing syllables such as “dee dee dee dee dee,” the melodies sounded like ancient folk laments and marching tunes.

The opening sets both nights were by a trio of musicians from the Elephant 6 collective, who also helped out with cameos during Mangum’s set: Scott Spillane and Laura Carter, both of whom played with Neutral Milk Hotel back in the day as well as the Gerbils, and Andrew Rieger of Elf Power. Spillane and Rieger each sang some nice songs, but the musicianship was ramshackle and sometimes blatantly off-key. The Elephant 6 scene and other lo-fi rock bands have always had a touch of amateurism, which can be charming in a naïve way, but these performances just made me wish they’d tuned their instruments better. And the songs paled in comparison with Mangum’s.

The crowds in Chicago and Milwaukee greeted Mangum rapturously, but the rapture felt a bit more intense in Milwaukee. Fans at both venues shouted questions in between songs, eager to hear some words from Mangum, but the questions tended more toward the sophomoric in Chicago. One audience member asked Mangum to compare Superman and Batman. Another asked his opinion of Stravinsky. One of these off-the-wall questions did generate an interesting response. Someone asked, “Jeff, how do you feel about reincarnation?” Mangum replied, “I’m doing it right now.” Despite his reputation as a recluse, Mangum seemed completely at ease performing onstage and interacting with the audience.

At the Pabst, a few audience members walked up to stand near the stage as Mangum played the second song of the night. At first, the venue’s ushers shooed those fans back to their seats, but then Mangum encouraged fans to get up if they wanted to. The whole front part of the main floor filled up soon with a throng of enthusiastic fans, standing and swaying to the classic Neutral Milk Hotel songs they’d never had a chance to hear live. Mangum remarked how gratifying it was to see his songs reaching people out in the world, years after he’d sent them out — “messages in a bottle.”