I wonder how many of the Northwestern students at this concert know how lucky they were. The double bill of MMJ and the New Pornographers was already so good that it was hard to believe these bands were coming to Evanston to play in a gym. And then it turned out that the “special guest” would be Stephen Malkmus playing a rare solo acoustic set. And then it turned out that the New Pornographers would be playing with Neko Case in the lineup — a rarity these days, since Case has been busy with her own solo concerts.

What a night. Of course, the venue sucked. Not as much as Northwestern’s Norris Student Center, where the Wrens played earlier this year, but it was definitely a gym with a bunch of kids standing around in the dark, and the sound of the bands echoing in the big room. Not the ideal place to see any of these bands, but, hey, a lot of great music has been played in gyms over the years.

Malkmus was a little awkward at first, having some trouble with guitar tuning and guitar effects (the loud bursts of noise he threw into a couple of songs, including Silver Jews’ “Blue Arrangement”), but awkwardness is part of what Maklmus’ music has always been about. Reduced to one voice and one guitar, his songs are still pretty quirky. It was nice to hear him doing that great Pavement quasi-hit, “Range Life.” The set was abbreviated, ending after just 35 minutes or so, since the concert was on a tight schedule. Or as Malkmus put it, “The Man is everywhere.” SEE PHOTOS OF STEPHEN MALKMUS.

The New Pornographers sounded very good at the recent show opening for Belle and Sebastian, but they sounded great tonight. That’s the difference that the presence of Neko Case makes. Sure, she’s ostensibly just a backup vocalist and occasional lead singer in this band, which is Carl Newman’s vehicle. But her vocals are so strong that they transform many of the tunes into double-lead-vocals.SEE PHOTOS OF THE NEW PORNOGRAPHERS.

My Morning Jacket opened with “At Dawn,” which used to be their standard opening song but had fallen out of recent MMJ tours. Really nice to hear that again. (The album At Dawn is still my favorite by these guys.) Jim James is still buried under hair, though better groomed than the “Cousin It” look of a few years ago. Other members of the band looked like they had actually been in a barbershop recently. MMJ didn’t do anything especially new or different tonight, but they excelled at what they also do so well — long, passionate and powerful jams. SEE PHOTOS OF MY MORNING JACKET.

Kudos the Northwestern student organization A&O Productions for booking such a great show. 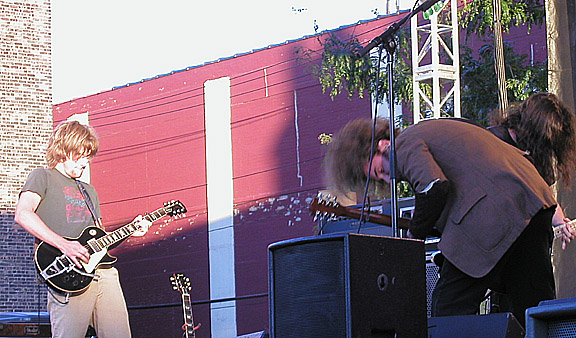 JUNE 18, 2005
My Morning Jacket
at the Randolph Street Festival

They’re better groomed… not quite as much hair, not quite as much reverb… but man, they still rock with incredible intensity. Tonight’s show was a reminder of why I have called these guys the world’s best live rock ‘n’ roll band. And I’m not the only one to give them that title.

I first saw them in 2002, at South By Southwest. I’d already heard reports about their live shows in Chicago, and I’d picked up their album At Dawn. The disc seemed pretty good to me, but it did not prepare me for the phenomenal concert performance I was about to see. One of the papers in Austin recommended the show that day, saying it would be a nice quiet end to the evening. The writer apparently had given only a cursory listen to some of MMJ’s quieter recordings, and hadn’t heard about their incendiary live shows.

This was one of the first times I’d ever used my video camera to film a musical performance and I couldn’t believe what I was seeing through the lens. After opening with “At Dawn,” the band launched into a hard-rocking song I’d never heard before (it turned out to be “One Big Holiday,” released later on the It Still Moves CD). Seeing these hairy guys thrashing around on the stage as they played their songs and amped up the intensity of what I’d heard on CD was simply amazing.

Lead singer and songwriter Jim James barely showed his face the entire concert, singing through a mass of hair that hang down over his face. As if that “Cousin It” routine weren’t enough, he also had a stuffed-toy buffalo head stuck on the microphone in front of him.Was he a little stage shy… or just weird? And did he have an animal fetish?

Later, at another concert, James played with a toy parrot perched on one shoulder. And then came the cover of It Still Moves, showing bears (stuffed bears? people in bear costumes?) instead of the band members.

But little by little, James has come out from behind the mask. I’ve seen the band in concert six times now, plus a show by Jim James with Bright Eyes and M. Ward, and My Morning Jacket has yet to disappoint. The band has gone through some personnel changes since that concert I saw in 2002 — the only members left from that lineup are James and bassist Two-Tone Tommy. The current lineup is pretty damn solid, though.

At the Randolph Street Festival show, James was wearing a tan sport jacket, his hair still long but neatly pulled back from his face. His voice was just as powerful and as beautiful as ever, as he sustained many long notes. He was more talktative than usual, bragging that My Morning Jacket had performed the best sound check by any band ever. He also noted that they had felt surrounded by cuteness at the festival, after visiting a tent with puppies and seeing someone walking around with a kitten.

MMJ played several new songs, which sounded promising, plus favorites like “Golden,” “One Big Holiday,” “Lowdown,” “Mahgeetah” and “Run Thru,” and a cover of Dylan’s “Tonight I’ll Be Staying With You.”

The great moments came when the band stretched out the songs — there was more than one false ending, followed by more jamming. MMJ’s detractors have pointed out that the band’s jams are nothing all that complicated, musically speaking. It’s true that they repeat many riffs over and over, but that misses the point of what’s so brilliant about MMJ. They take a seemingly simple pattern of notes, and play it harder and harder, flailing it until it sounds like something new. It’s so cathartic.

SEE PHOTOS OF MY MORNING JACKET.