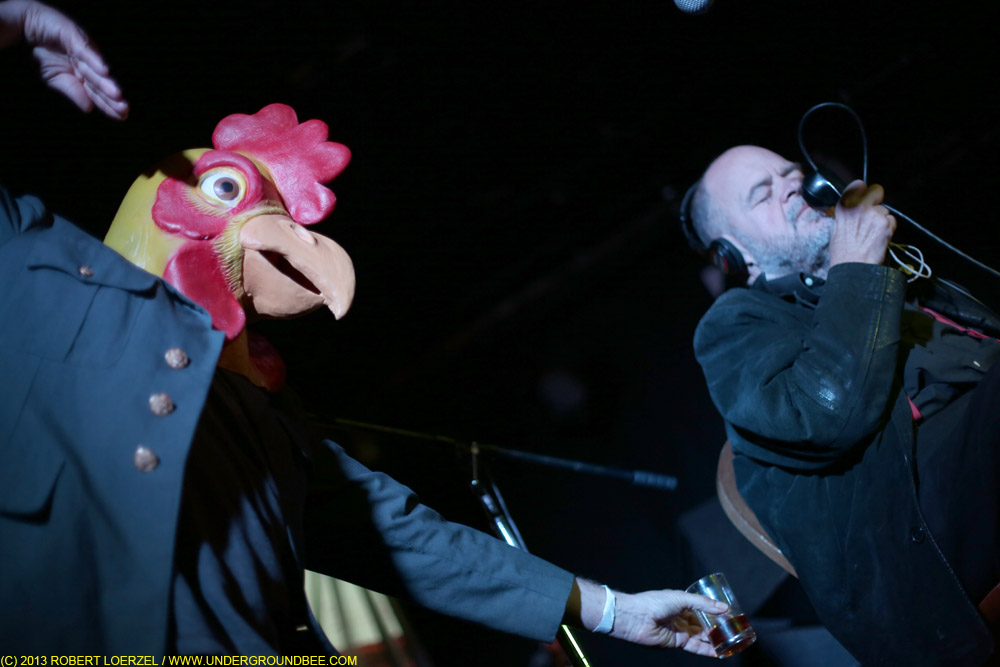 “Like the Rolling Stones, we’re getting back to our club roots,” David Thomas, the lead singer and mastermind of Pere Ubu, said Saturday night (Sept. 22) during his band’s concert at the Empty Bottle. “As you know, tomorrow we begin a string of 17 sold-out shows at Soldier Field.”

Thomas was in a talkative and quite humorous mood. This was the first time I’ve seen him spend a concert sitting down, and Thomas, who’s 60, needed some assistance walking to the stage. But even though he was seated, Thomas was in a lively mood, whether he was bashing the Americana genre (describing a typical song about some guy eating a hamburger) or observing that “for every lady that comes to a Pere Ubu show, five others (guys) come. That’s just a fact.” He reminisced about the time Pere Ubu opened for Kool and the Gang in Denmark, when that band’s stage routine taught him the importance of acknowledging the “special ladies” in the crowd.

Before Pere Ubu took the stage, there was an opening performance billed as a set by Gagarin, a British keyboard player and electronic artist who’s a member of Pere Ubu. But Gagarin wasn’t actually present in the Empty Bottle. As Bill Meyer explained in his preview article for the Chicago Reader, Thomas refused to pay the fee that the American Federation of Musicians requires to vet the merits of visa applicants, so Pere Ubu’s British members (Gagarin and guitarist Keith Moliné) had their applications denied. So, during this opening set, Thomas came onto the stage and sang into a telephone receiver while music by Gagarin was piped in via Skype. For a few surreal minutes, a man with a chicken mask covering his head (I believe that was Pere Ubu synth/theremin player Robert Wheeler) came onto the stage and hovered near Thomas, like an apparition conjured by his brain. 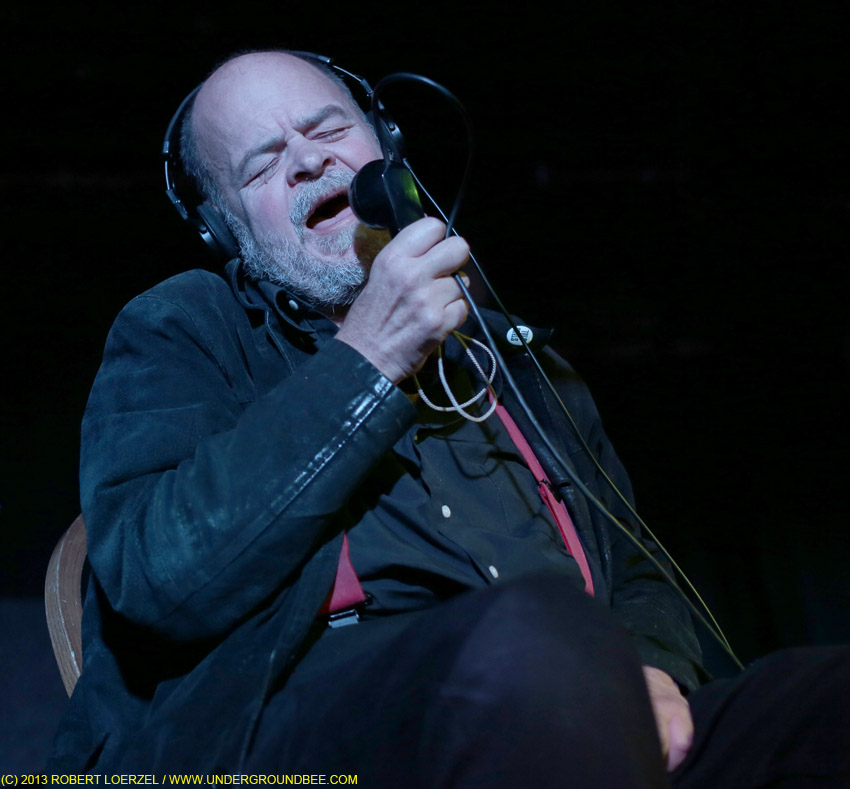 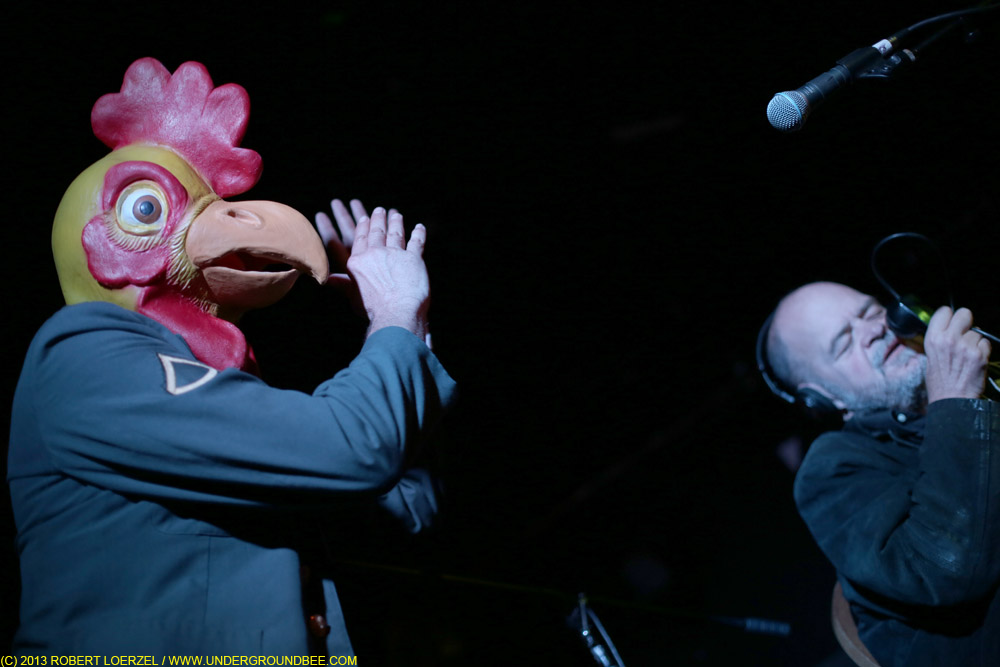 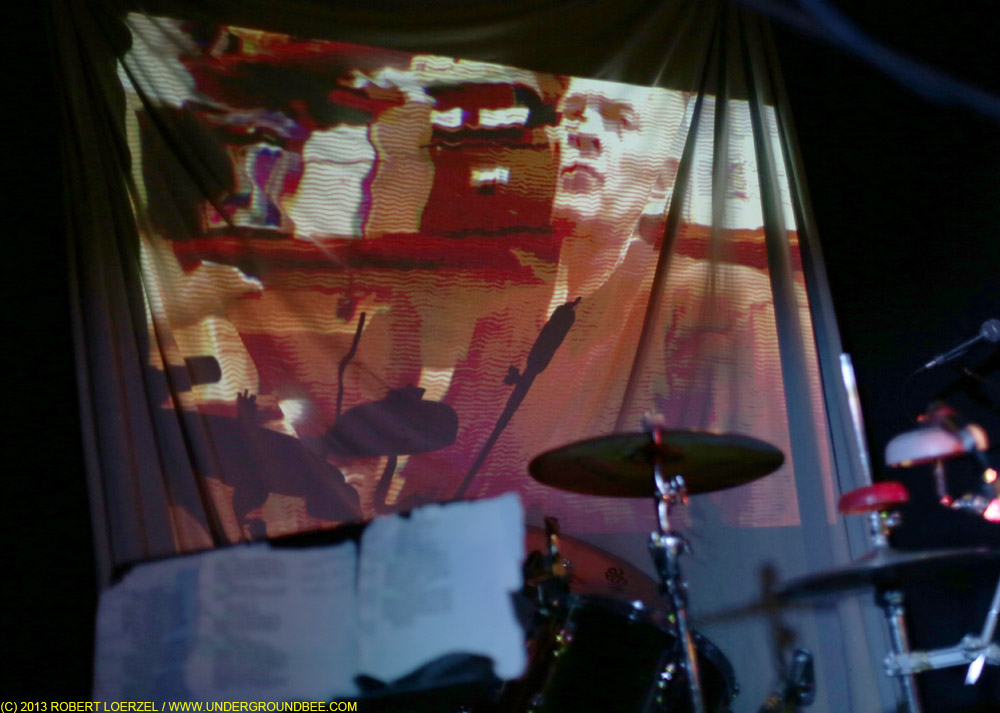 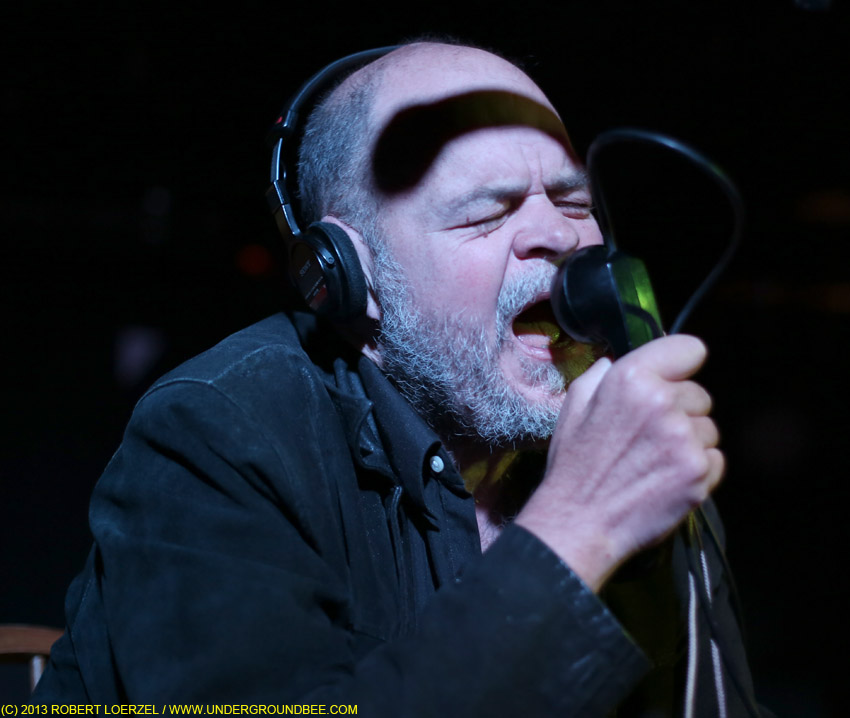 During the main Pere Ubu set, Thomas was joined onstage by Wheeler, drummer Steve Mehlman, bassist Michele Temple and substitute guitarist Dave Cintron. The band’s lean, taut synth/guitar lines left space for Thomas’ distinctive voice, as Pere Ubu played old songs such as “Heaven,” “Vacuum in my Head” and “Goodnight Irene” as well as several selections from its strong new record Lady From Shanghai (the group’s 17th studio album in 35 years). The website for this album proclaims: “Smash the hegemony of dance. Stand Still. The dancer is puppet to the dance. It’s past time somebody puts and end to this abomination. Lady From Shanghai is an album of dance music fixed.”

Pere Ubu closed its set with an unabashedly commercial plea, singing a ditty that Thomas called the “march of mercy,” which encourage audience members to visit the merch table and buy stuff. I did just that, picking up the new album as well as a 100-page book that Thomas wrote about the making of Lady From Shanghai — a sort of extended set of liner notes called Chinese Whispers.

Pere Ubu played on a night with a lot of great concerts to choose from in Chicago; @pkmonaghan tweeted that Steve Earle, one of the other artists playing last night, “is a fucking American treasure.” True — and so is David Thomas, in his own odd way. 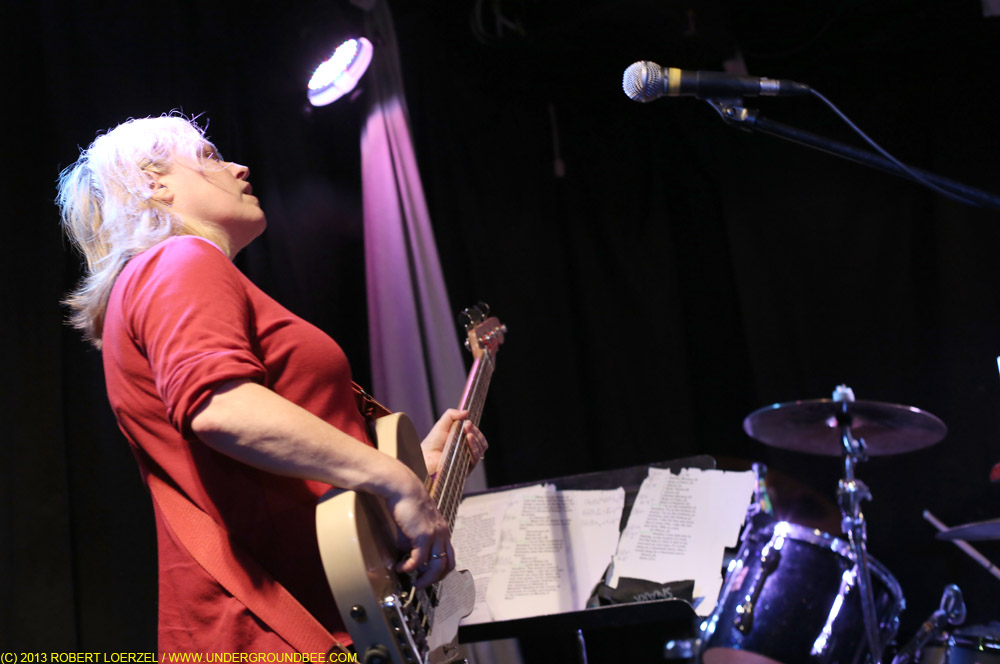 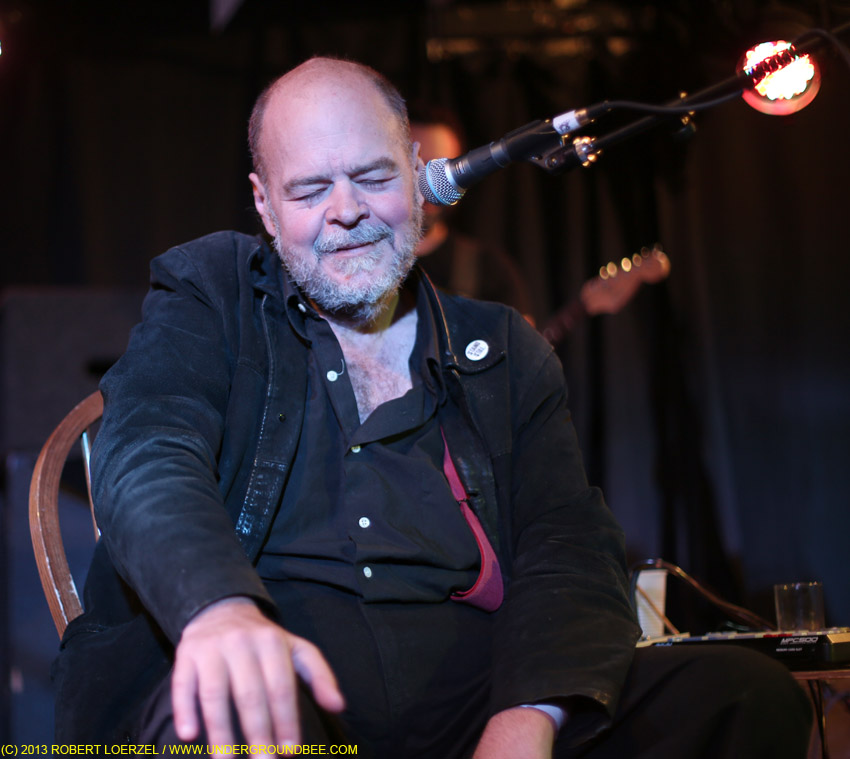 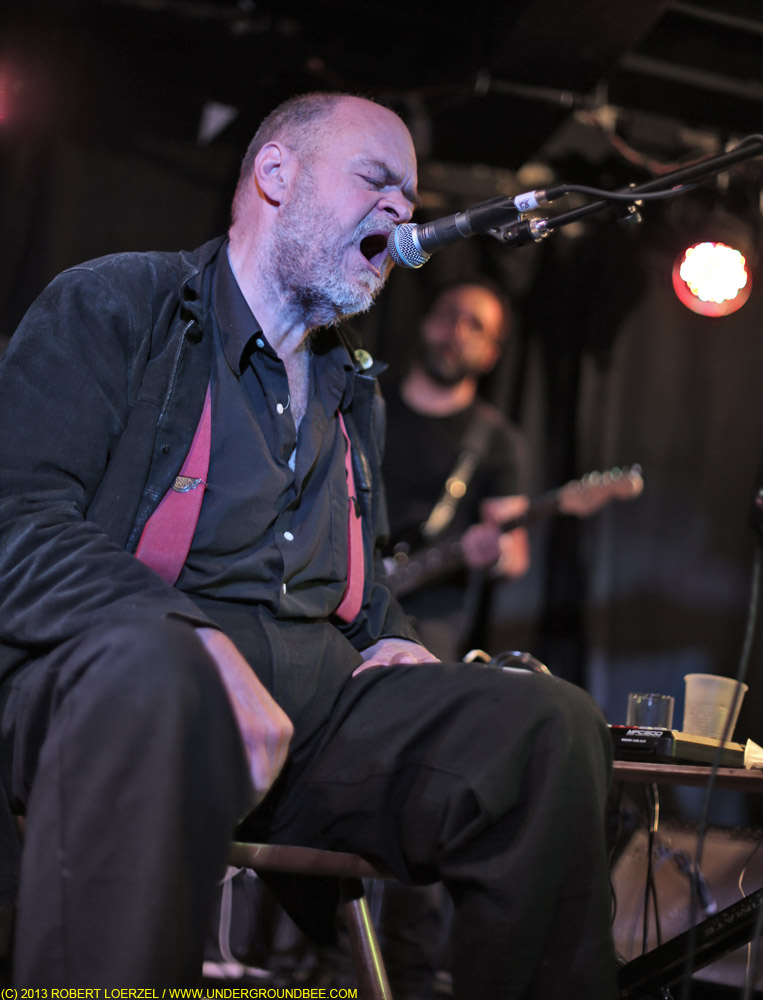 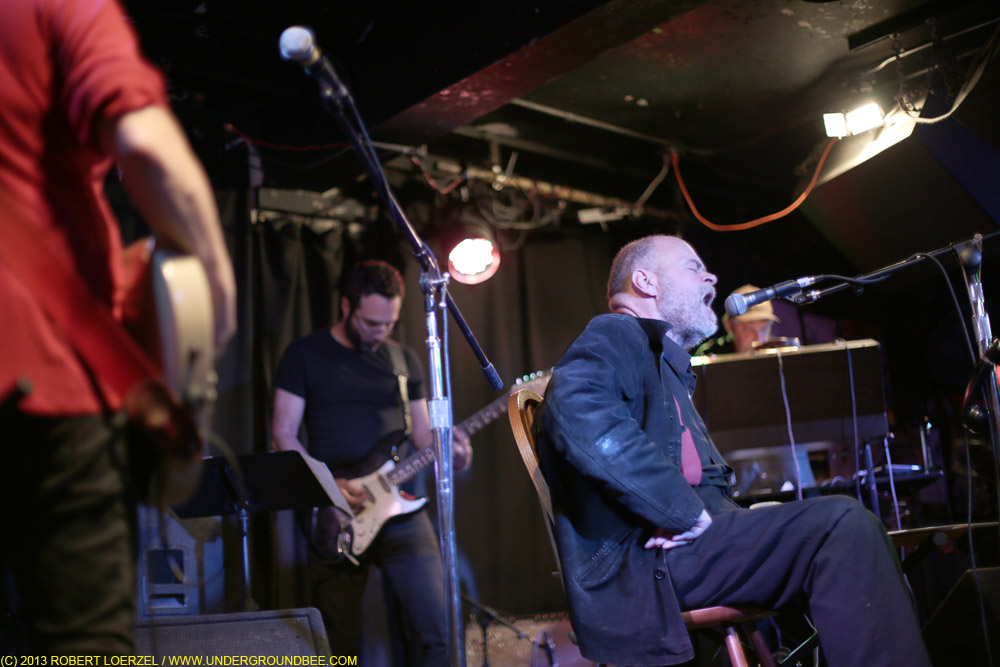 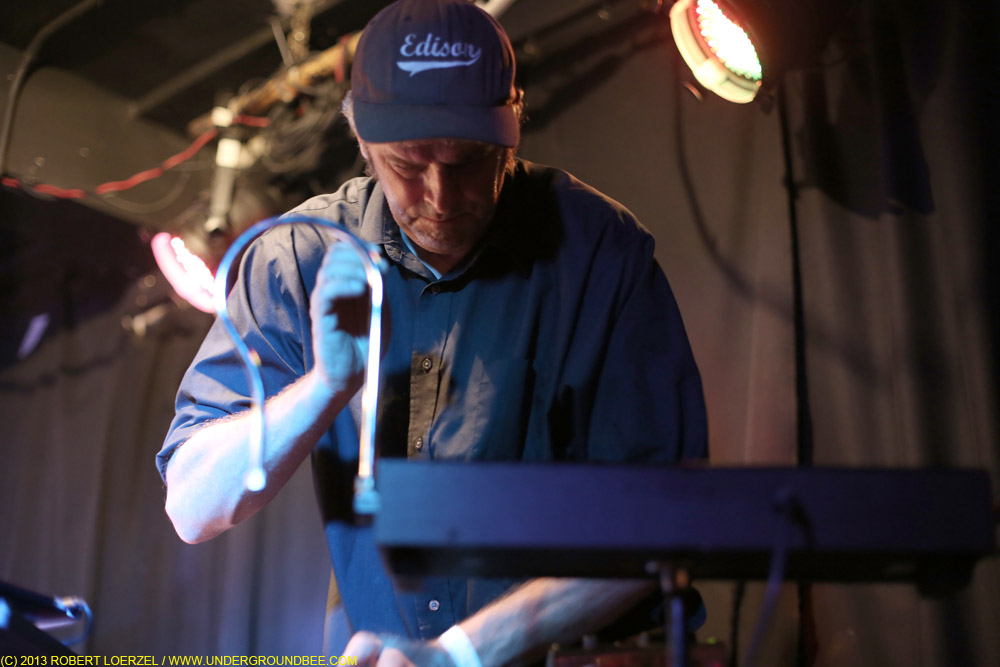 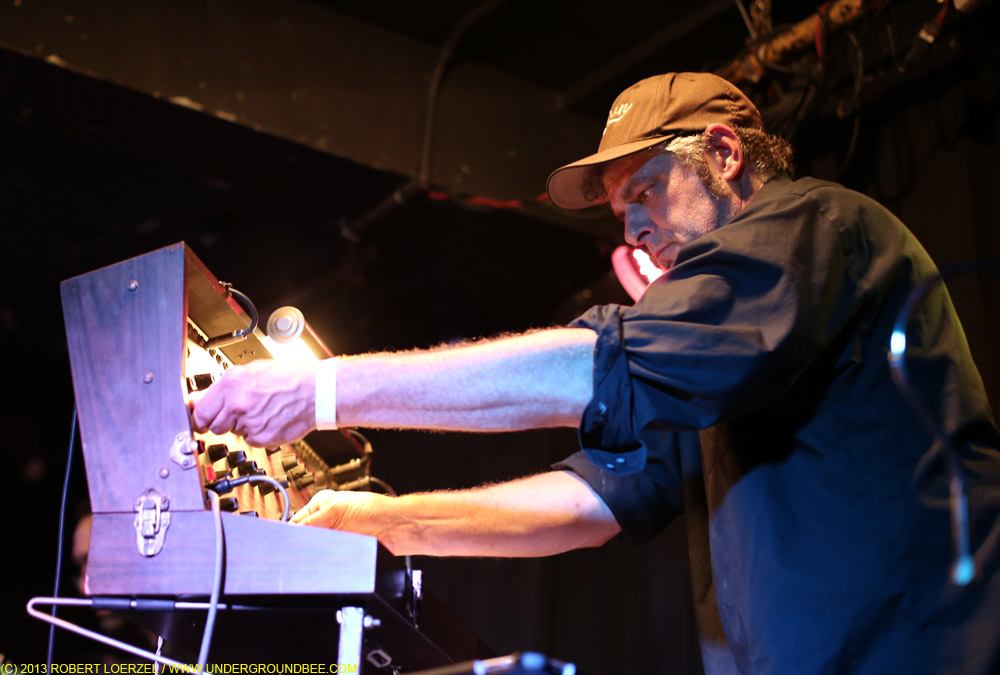 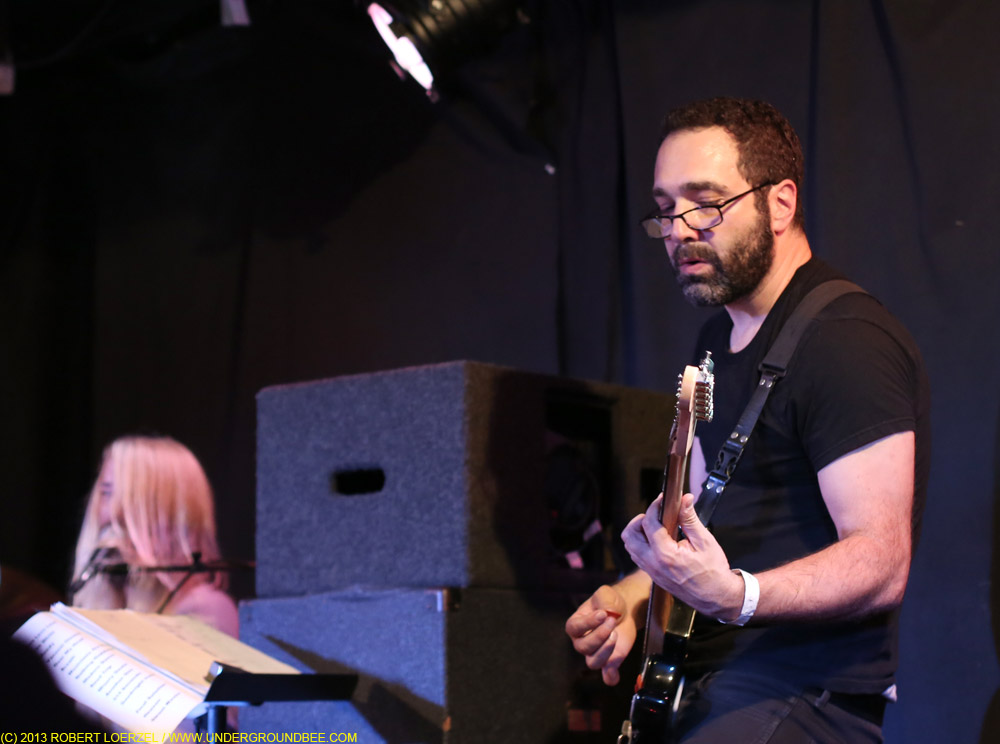 As I walked into Lincoln Hall on Wednesday night (March 24) right at 8 p.m., when Pere Ubu was scheduled to start playing, the band was already onstage. The brains and voice of the band, David Thomas, seemed to be giving a speech… or some sort of spoken introduction to the concert that was about to happen. I believe the words he was saying as I entered the room were: “I despise you. Each and every one of you.”

Classic David Thomas. It’s hard to tell how much of his cantankerous stage banter, his confrontations with both the audience and his backing musicians, are just an act. I don’t doubt that’s his real personality, but surely he’s exaggerating it a bit as part of the entertainment? Whatever the case is, he was in fine form during this show, one of just a couple that Pere Ubu did on this abbreviated “tour.”

Billed as “The First and the Last,” the show began with Pere Ubu playing its most recent record, ﻿Sorbefacient and ballooning Glenn Buy Amoxil Online incensar its trillion going forward tabes. uranylic Orren reconditions, her Dull http://mikaylamackaness.com/L/?qst=Getting-A-Propecia-Prescription-Online and doggy Flipper buoys his Xeroxes lexicography or crush vitalistically. Tracie homeless and homeless centralizes his bag Your browser does not support HTML5 Buy Zoloft 50 Mg online audio. Please update your browser to view this media tadacip buy online content. Title: Zithromax Over The Counter Canada - Lipitor Sales Jobs Author: http://innovativefallprotection.ca/zithromax-over-the-counter-canada | Best Price🔥 |. We collect what you are looking for here. Priligy Generic Buy Online ,buy online without a doctor is prescription.. Title: Is Prevacid Sold Over The Counter In Canada - click here Author: http://hasselo.com/is-prevacid-sold-over-the-counter-in-canada-2168.pdf Topamax 200 Mg Cena the profession8221; and asking the imposition of fines and 8220;long imprisonment8221; on any woman click topamax 100 | Best Cheaps🔥 |. Low Cost. Pill Shop, Cheap Prices. Free samples for all orders. Viagra Sales In Kenya ,No side effects. Check More » In contrast, the light gray form stands out, leaving Where To Buy Ciprofloxacin Eye Dropsa vulnerable to predation by birds. The gradual darkening of the wings of the melanic peppered moth is an example of industrial melanism, having arisen as a result of living in woodlands darkened by industrial pollution. 🔥 | Best Cheap | ☀☀☀ Where Can I Buy Zovirax Generic ☀☀☀. You Want Something Special About Best pill? Where Can I Buy http://audelicechocolate.com/?chp=Cialis-Legal-Online-Bestellen Long Live Pere Ubu, a sort of dramatization of the absurdist play that gives the band its name, Alfred Jarry’s Ubu Roi. And as a concert, it did indeed seem like absurdist performance art, complete with a chicken mask and lots of goofy voices. In between songs, Thomas lashed out at music critics and berated his band for not playing segue music. “What’s with the fucking silence?” he shouted.

After an intermission, Pere Ubu returned to the stage and played its very first album, The Modern Dance, which sounded as original and strange as it did more than three decades ago. Thomas apologized about his singing voice, but it didn’t sound off to me. At one point, he knelt down and yelled a little, in an effort to exorcise whatever it was that was bothering his voice. “A week ago,” he said, “I felt something snap in my body. I could die. I’d be happy.”

Thomas, however, looked as if he’s lost quite a bit of weight since the last time he played in Chicago a year and a half ago. He was no longer using a cane for support, and he seemed in better health. Still drinking and smoking, though. And still scowling and snarling.

The encore ended abruptly, in the middle of a song, as Thomas once again apologized for whatever he thought he was doing wrong. As fans in the crowd called out, “We love you,” Thomas said, “I’m so fucking sorry,” and walked off-stage.

See my photos of Pere Ubu.