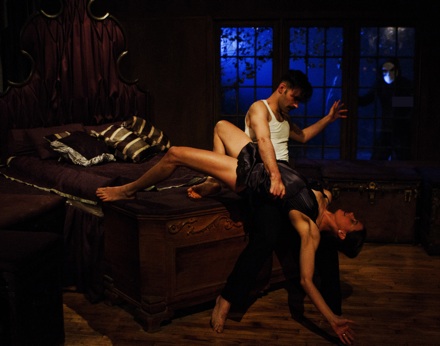 I was lost in a dream for three hours one night last week in New York — wandering through the rooms of a haunted hotel, running up and down stairs as I chased after the characters from a Shakespeare tragedy, witnessing blood spilled and washed off their bodies, watching it all through the eyeholes of a white Venetian mask. This was Sleep No More, a mostly wordless version of Macbeth performed by the British theatrical troupe Punchdrunk inside a large old building in New York’s Chelsea neighborhood.

Calling it a play is insufficient. It’s part theater, part dance, part haunted house, part art installation — and one of the most incredible artistic immersions I’ve ever been through. As I say, I was lost in a dream. Of course, as with any play or film or concert, I knew at all times that I was watching (and, to some extent) participating in a performance. A game. A play. But like few performances I’ve ever experienced, Sleep No More felt like I was in the midst of some strange thing that was actually happening.

From what I was able to figure out, the action is on a sort of loop, with each actor going through the same sequence or a similar sequence three times over the course of the show. At three points, they all gather in a grand ballroom for a tableau resembling the Last Supper — and two (or maybe three?) times, they gather in the same room to dance. In between, they go their separate ways, performing scenes solo or in small groups.

This scheme has its frustrating elements. It’s impossible for any audience member to see everything happening in every room. At the end, you’re left wondering what you missed. (For one thing, I know that I missed out on the scene where the witches give Macbeth their prophecy that he will become the king.) For some stretches of time, you look around rooms where no actors are present, while action is happening elsewhere. (That’s not a waste of time, however, since the rooms are filled with curious and striking objects and decorations, which you may scrutinize almost as much as you’d like.)

To me, however, these potential frustrations are part of what makes Sleep No More so special. They reinforced the sense that I was in the middle of complex, overlapping events — which were being witnessed in different order and from different angles by each audience member. It would be interesting to see audience members compare notes after a performance, to see how they would piece together what had just happened — much like a police officer or a journalist interviewing various witnesses to an accident or crime. In fact, I did overhear a bit of this sort of discussion in the lounge at the end of the night, people saying to one another, “Did you see the part where…?”

And while I know I saw maybe a third or a fourth of everything that happened in the Hotel McKittrick, what I did see was compelling and unforgettable — especially Lady Macbeth tossing herself around her bedroom with frightening abandon, a physical expression of her character’s famous “Out, damned spot!” line. And there were several startling moments of fight choreography and dance moves that felt downright dangerous. Seeing the story in wordless, fragmented scenes turned it into a fascinating puzzle.

Putting the audience members in those masks was a brilliant idea. As you move around the hotel and watch the other audience members, it’s impossible not to start thinking of them as characters in this unfolding drama. The actors and audience members occasionally brush up against one another. At a few points, I was alone or almost alone with an actor somewhere in the building, and it occurred to me that I was getting what was essentially private performance at that moment. In the closing scene, Lady Macbeth suddenly appeared in the midst of the crowd, standing next to me. I think I was one of only a few people who realized she was there. By standing next to her, and feeling her bump into my shoulder, I was experiencing this scene from a perspective unlike the rest of the audience. And I’m sure everyone else in the audience had similar moments different from what I went through.

Sleep No More makes you think about the possibilities of taking theater beyond its usual boundaries. It’s certainly not the first theatrical show to immerse an audience inside an unconventional space. Here in Chicago, Lookingglass once did a production of Mary Zimmerman’s Eleven Rooms of Proust with a similar conceit, which I missed, to my great regret. And other companies have taken a similar approach — but nothing as elaborate as what Punchdrunk has accomplished with Sleep No More.

If I lived in New York or if I had a chance to go back this summer, I would eagerly see Sleep No More again. Originally scheduled to close in late May, it has now been extended until Sept. 5. But more than anything, I am hoping that more theater companies find ways of putting on shows as ambitious, daring and unconventional as this. In the meantime, I am sure that my subconscious mind will be returning to the corridors of the Hotel McKittrick for a while when I drift off to sleep.