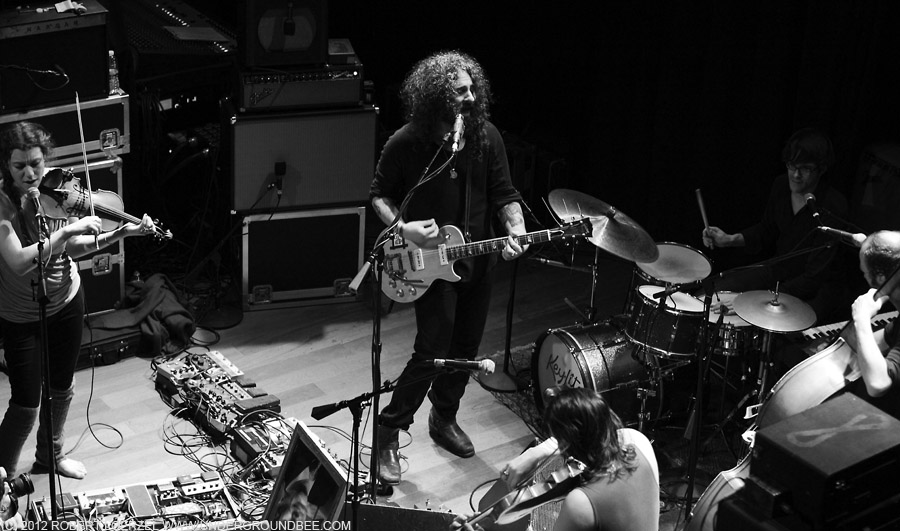 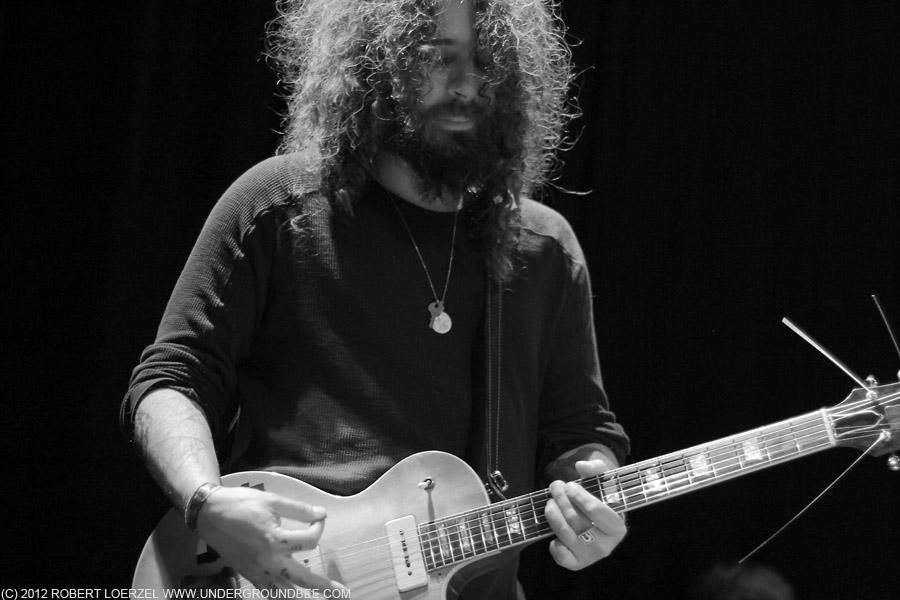 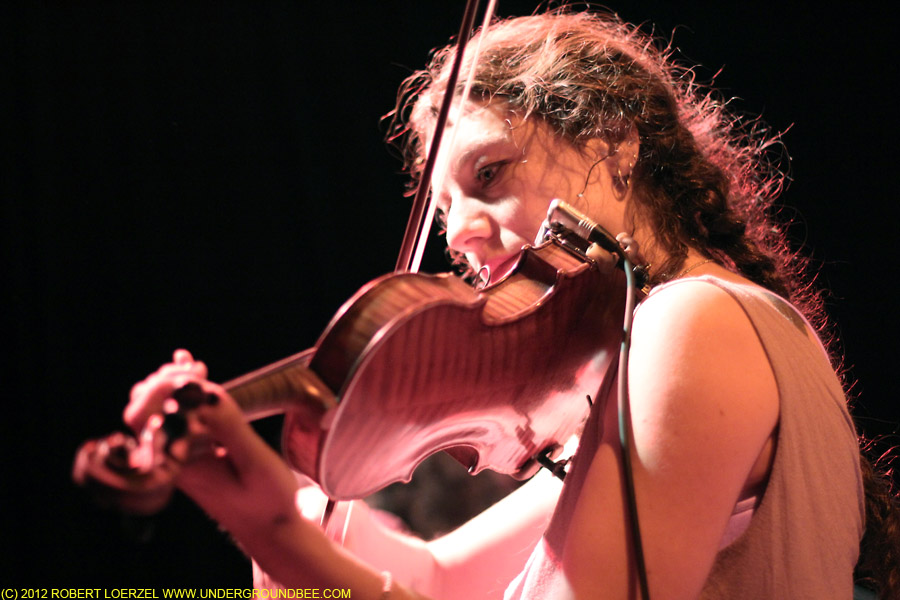 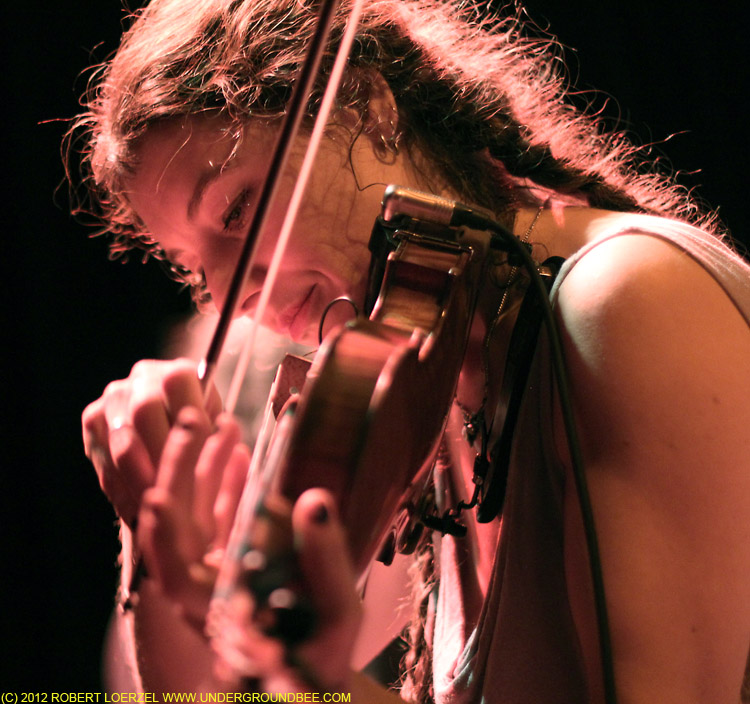 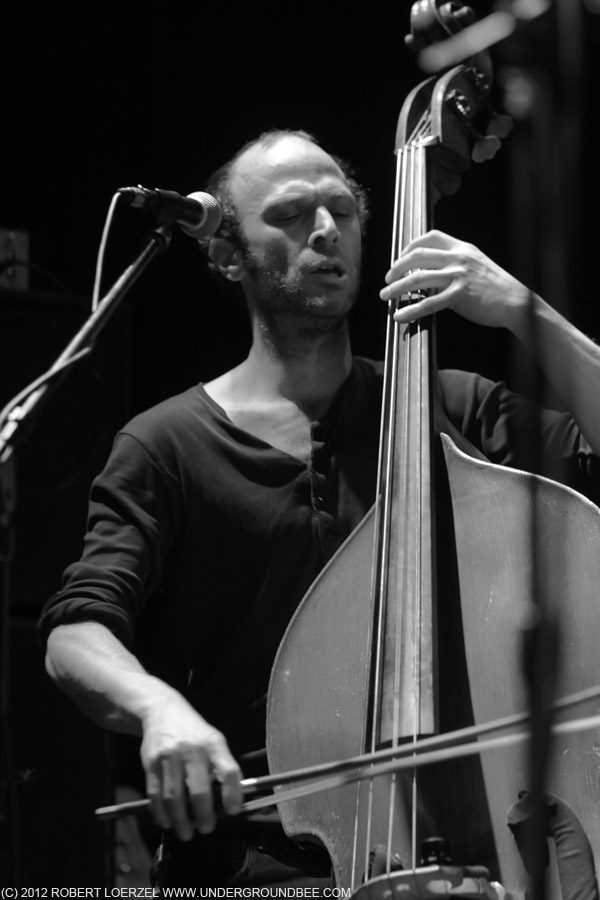 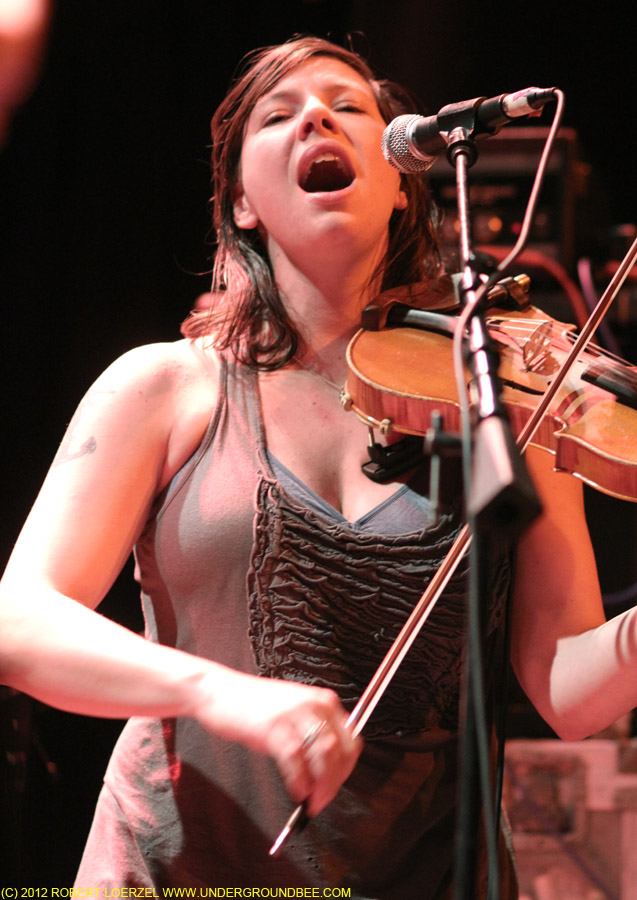 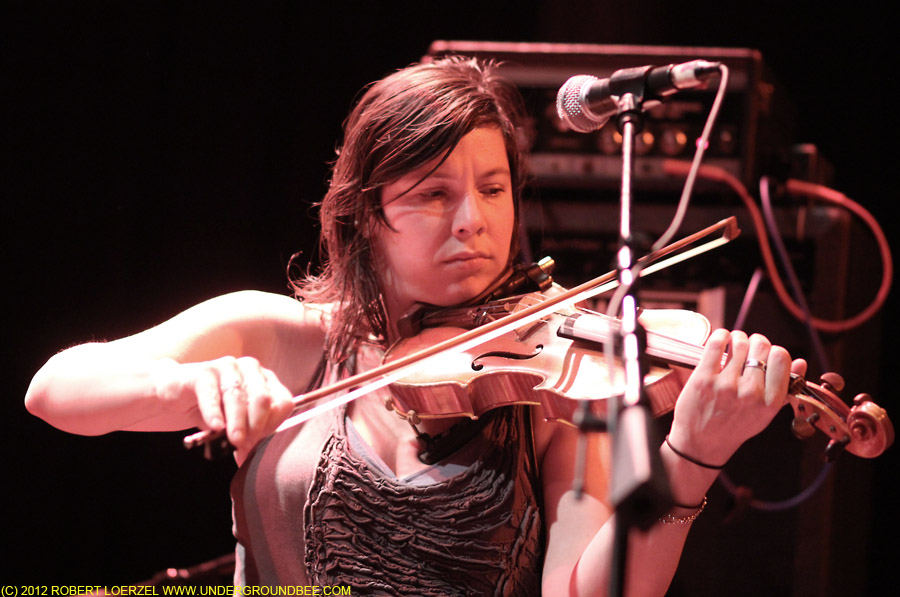 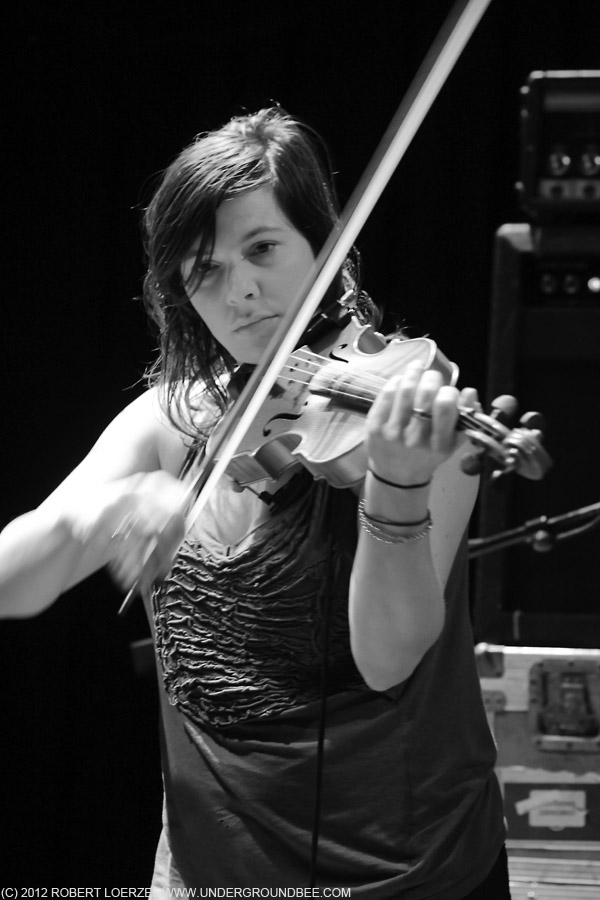 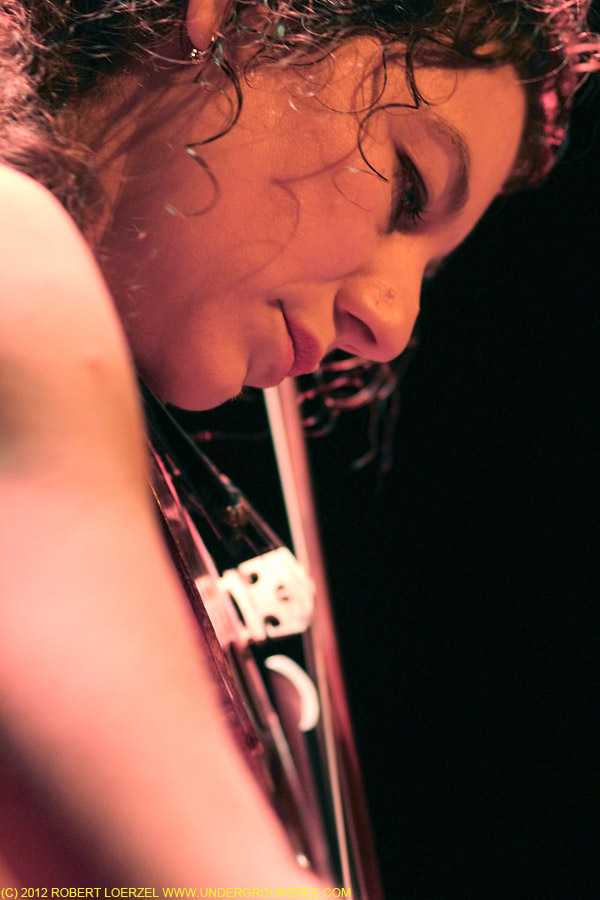 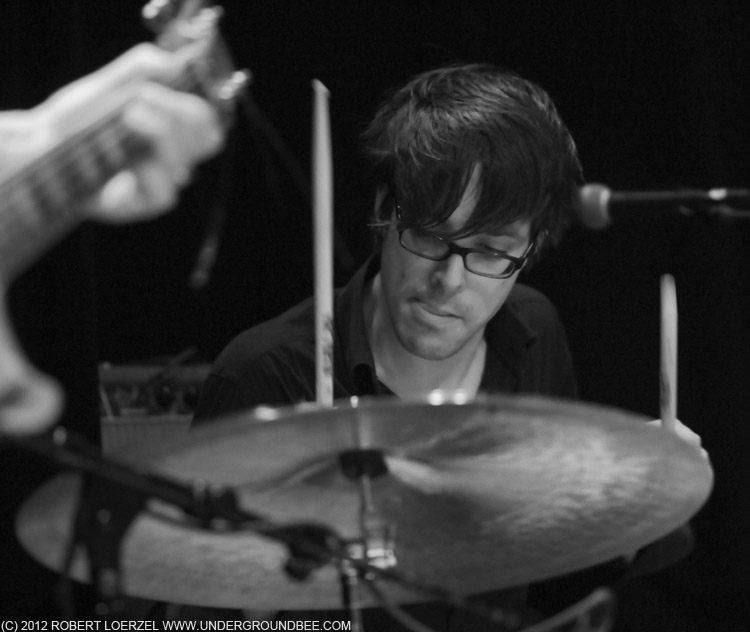 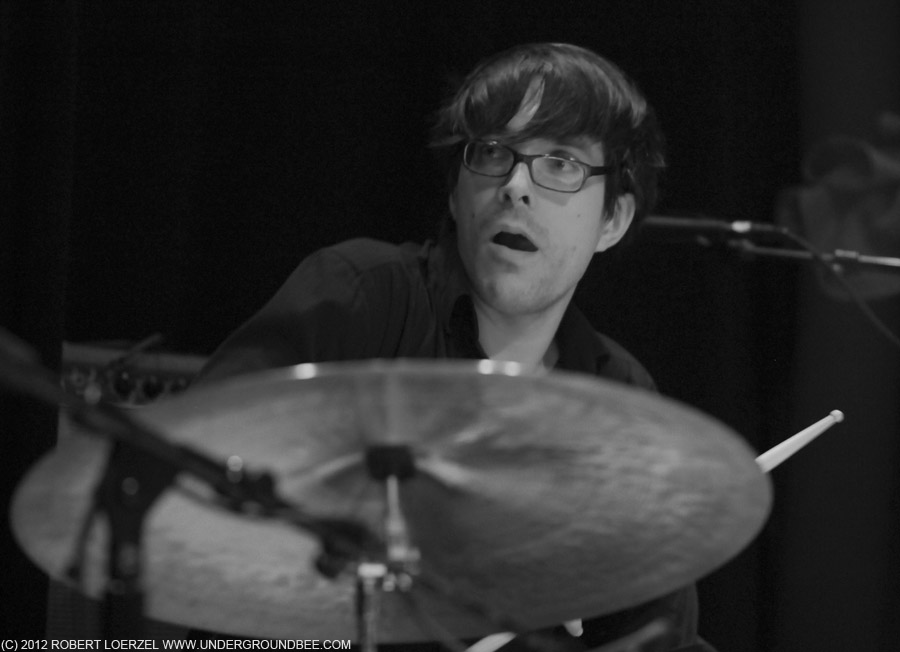 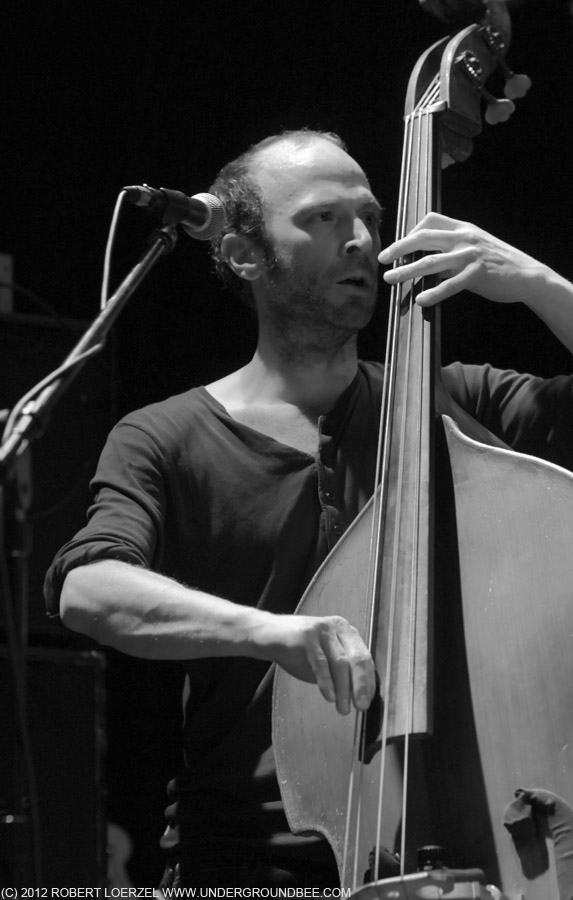 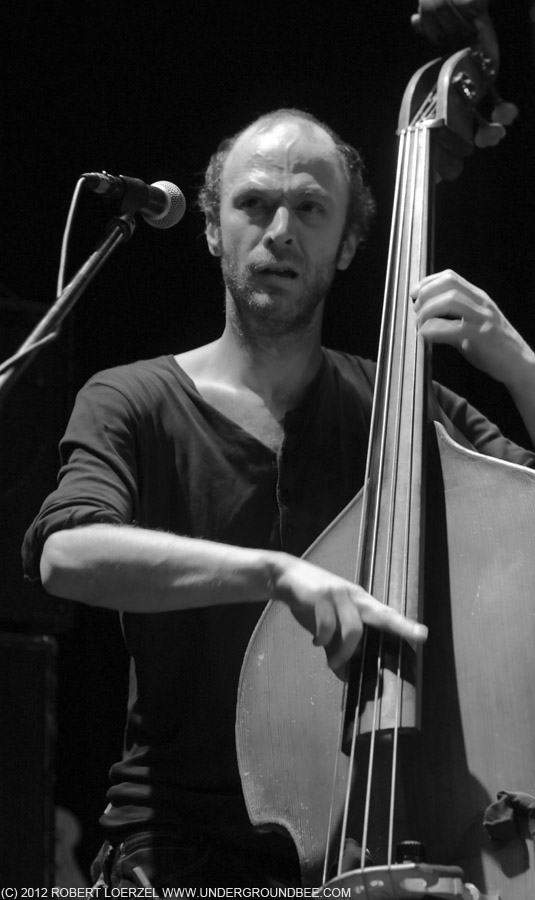 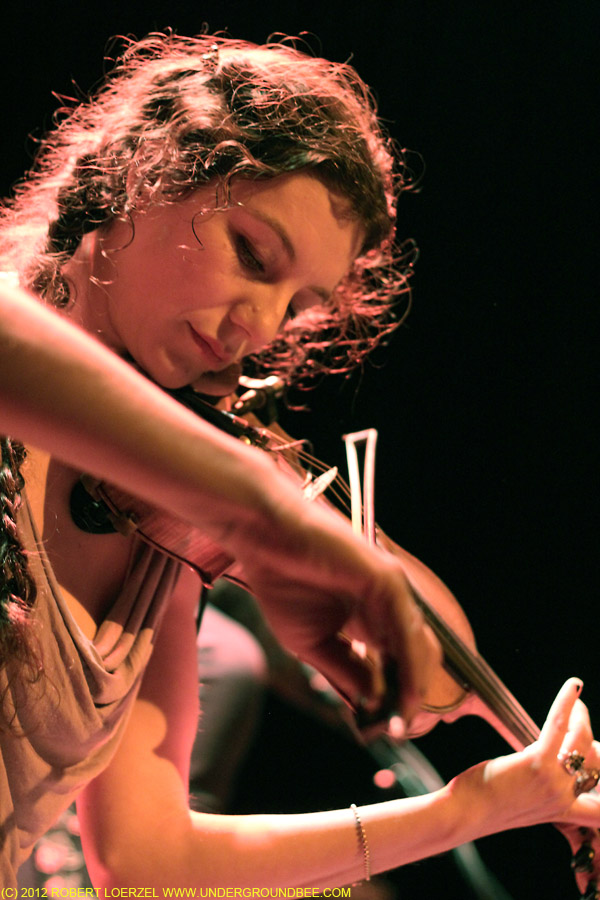 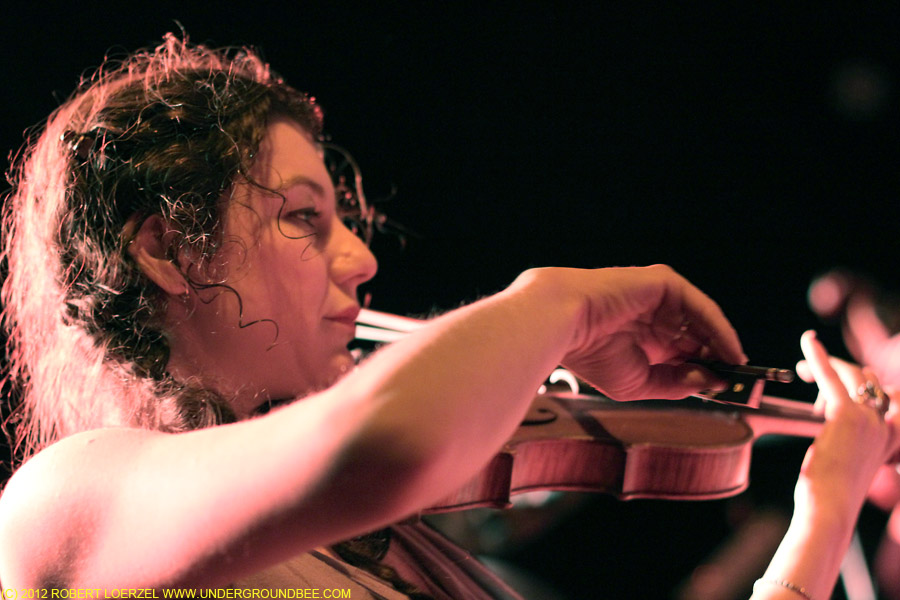 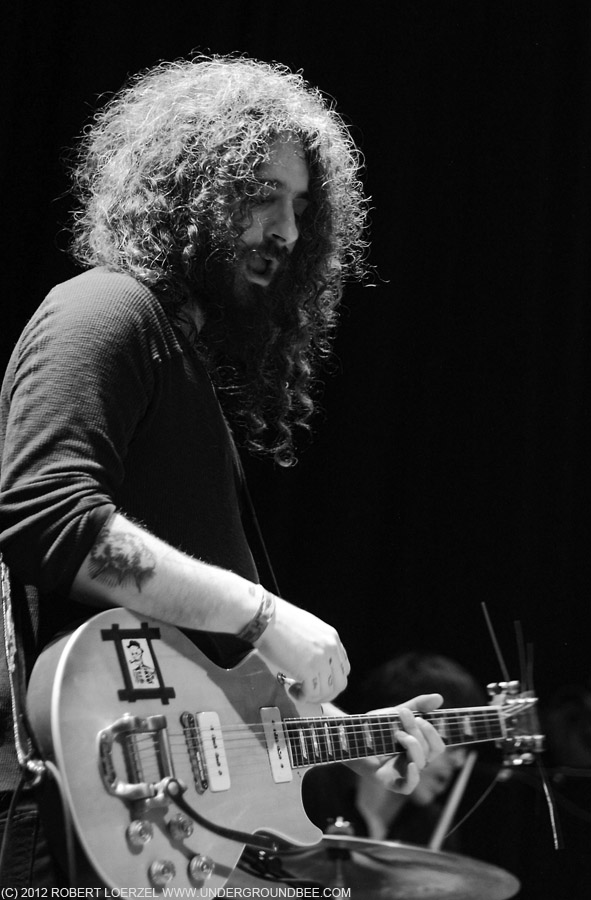 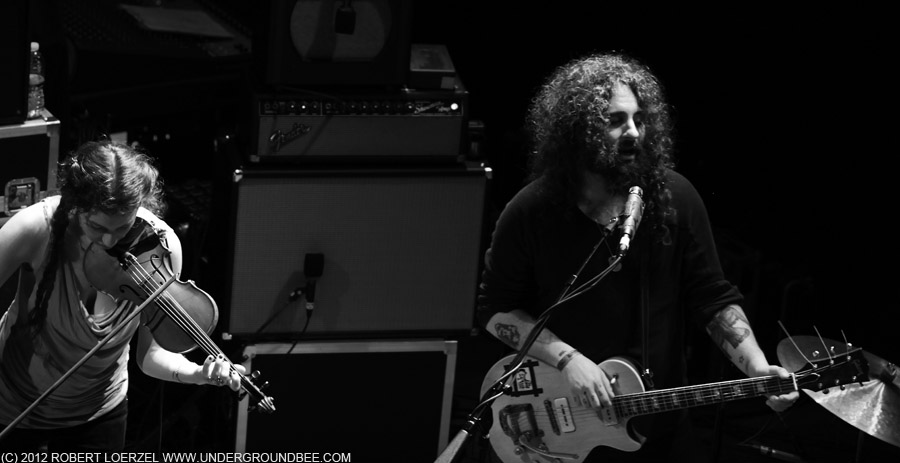 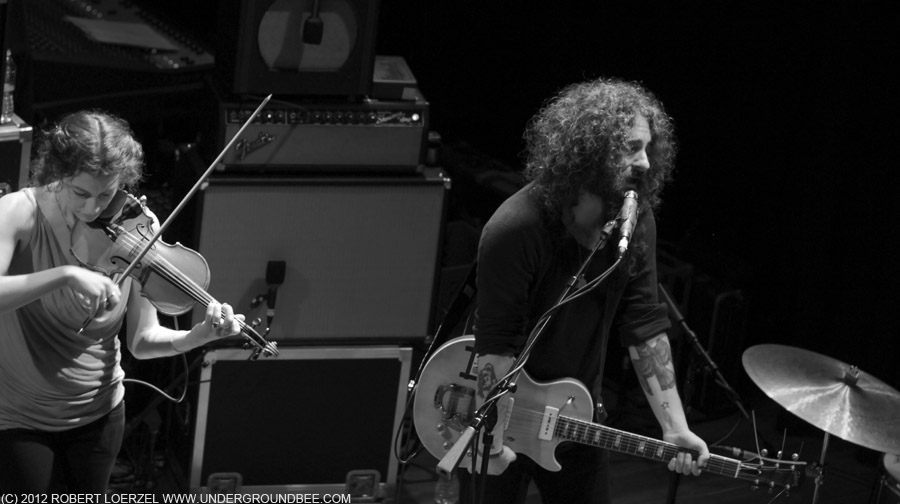 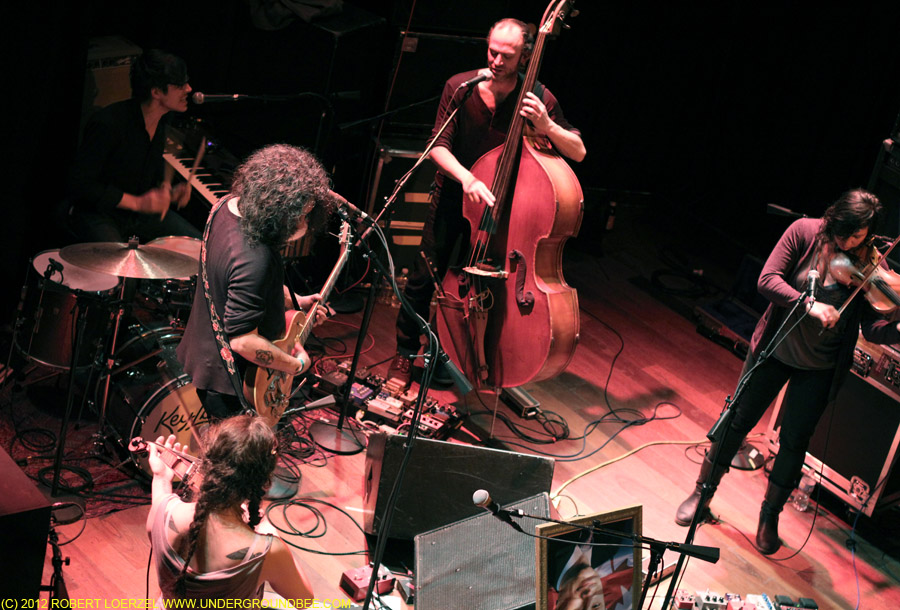 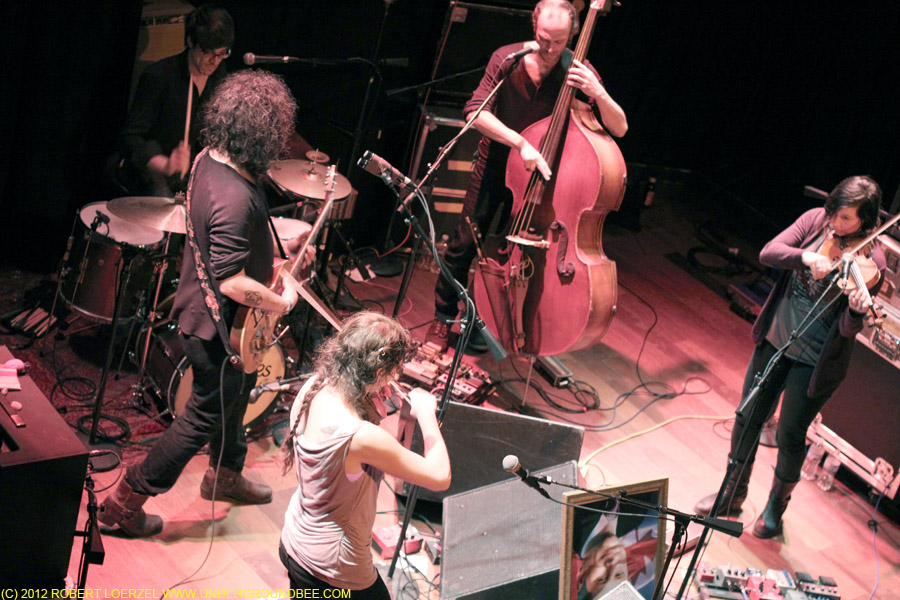 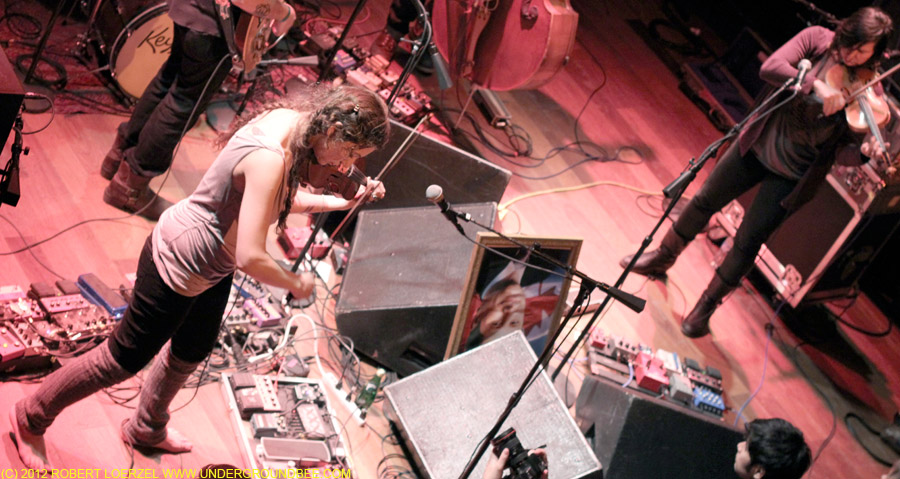 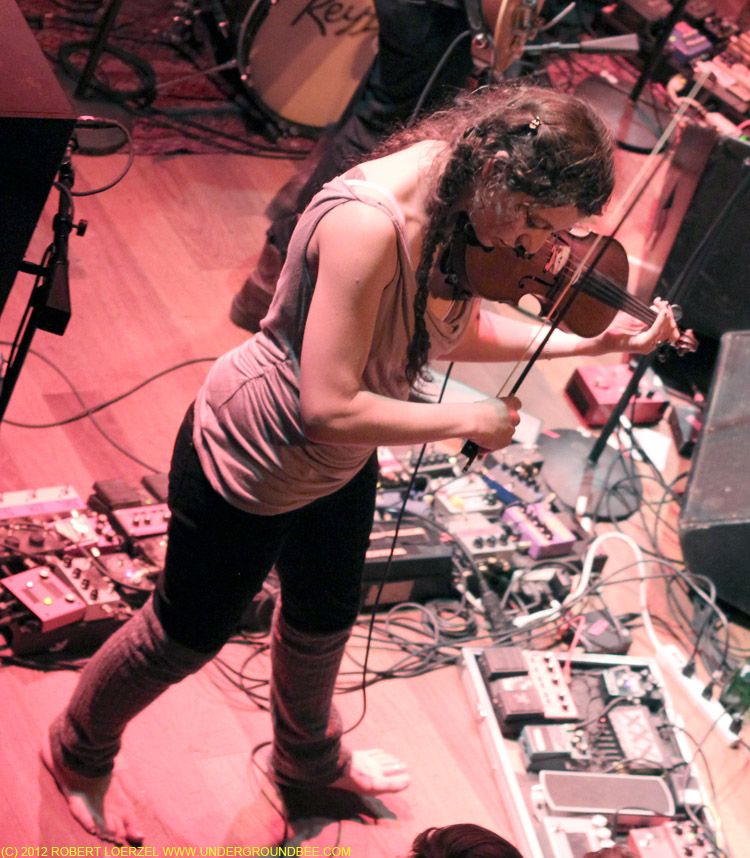 Epic. That’s the word I keep coming back to whenever I describe the music of Thee Silver Mt. Zion Memorial Orchestra. It’s not simply that this Montréal band’s songs tend to be 10 or 15 minutes long. And it’s not simply that the band uses its violins, upright bass and guitar to make dramatic sounds resembling an orchestra at full blast. There’s also the heightened emotion and sense of impending apocalypse in the vocals of Efrim Menuck. And his lyrics, which sprawl on for page after page, with so many memorable turns of phrase. Everything about it is epic.

Does that mean it’s pretentious, too? I suppose it can be taken that way, but there’s always been a fine line between beautifully epic music and pretentiously overwrought music, and of course, different fans draw that line in different places. As much as I enjoy songwriters who keep things simple and subtle, I also love a band that’s bold and ambitious, and Thee Silver Mt. Zion certainly qualifies for those adjectives.

The group came to Chicago last week for two nights of music. I did not see the first night at Lincoln Hall, but I went to the May 27 show at Schubas. The last time Thee Silver Mt. Zion played in Chicago, a couple of years ago at Logan Square Auditorium, some inebriated folks at the back of the room repeatedly disturbed the concert by yelling out inane comments. That might be what Menuck was referring to last week when he said, “We’ve had an antagonistic relationship to your city in the past.” In any case, Menuck said he was appreciative of the warmer reception his band got this time. (And, hey, that was just one group of idiots shouting last time, not the whole city.)

What made this show rather unusual was the sheer quantity of talking in between the songs. Menuck has been taking audience questions on this tour, and he repeatedly asked the crowd what they wanted to know. The questions ranged from absurd jokes to serious inquiries about the group’s creative process, and Menuck’s replies ranged from his fashion advice (“I don’t think you should be allowed to wear a baseball cap after the age of 22 years”) to a rant about BP’s oil spill. These back-and-forth chats with the crowd were interesting and entertaining at first, but after a while, they got old, stretching out the pauses in between songs to the point of tedium.

The music, on the other hand, was magnificent and enthralling throughout the set. Thee Silver Mt. Zion played a bit of its older music, but the focus was on its two most recent albums. 13 Blues for Thirteen Moons was my favorite record of 2008, and the band’s new record, Kollaps Tradixionales, is shaping up as one of 2010’s best. The group has had a larger lineup in the past, but the five-piece version touring now still makes a big sound, with two violins up at the front of the stage, while guitar, drums and bass are arrayed behind the string players. While most rock bands using strings go for a light orchestral-pop sound, Thee Silver Mt. Zion uses the tools of classical music to make songs that resemble the sharper-edged tones of orchestral thunder.
www.tra-la-la-band.com
www.myspace.com/asilvermtzion

And now… I eagerly wait to find out the details of the upcoming tour by the older band featuring Menuck and some members of Thee Silver Mt. Zion, the legendary God Speed! You Black Emperor. That band’s web site, http://www.1119732.net (with a URL that I suspect is a reference to the 1914 U.S. Patent number for Nikola Tesla’s Apparatus for Transmitting Electrical Energy), says GSYBE will be playing in “9 American towns.” I’m hoping one will be Chicago, or at least a town nearby.

The May 27 show at Schubas featured Chicago’s Sadhu Sadhu as opening act. This was the first time I’d heard Sadhu Sadhu, and I was pretty darn impressed. The group plays long, jammy, dark, psychedelic rock with hypnotic bass lines and lots of guitar solos.
www.myspace.com/sadhusadhu