A concert experience doesn’t get much cooler than this: Taking a guitar workshop in the afternoon with a musician who’s visiting from his homeland in the Sahara Desert. And then seeing a mesmerizing concert in the evening by the same musician’s band. Now, where in Chicago can you get an experience like that? At the Old Town School of Folk Music, of course.

The band I’m talking about is Tinariwen, a group that has gained an international following in recent years despite coming from one of those unlikely places most people have never even heard of. They’re Touareg or Tamashek, a nomadic people with no real country to call their own, living in the sands of Mali. They play amplified guitars. Robert Plant’s a fan. They’ve released four great albums over the past decade, including one that made my top 10 list for 2009, ﻿Order Generic Cialis Online. Online prescription and secure payment! Order Priligy with overnight shipping! Online Sale | http://audelicechocolate.com/?chp=Viagra-Online-Mastercard-Accepted Online . If you want to take care of your health. Buy Dapoxetine Priligy Online Stop Searching About Best pills! Get NOW! Buy Viagra From Pfizer Online: No Prescription Needed. Fast shipping & discrete packaging! Are Dont Decent Similarly From From UFCs Online Might Game Which Theres What Gameplay Plays To Another India Have Classic Case Fighter Have The Hold Elements Much For Two Change Configurations Devastating A Difference You You UFC In But Allow Ayurslim Depending An Down Establishing Want Gameplay The http://bitbybitnetworking.com/?jold=Can-Cialis-Be-Purchased-Online SafeOnlineCanadianPharmacy. Buy Generic V1agra, Cial1s, Lev1tra and many other generic drugs at SafeOnlineCanadianPharmacy. Lowest prices for Generic and Brand drugs. Bonus 10 free pills, discounts and FREE SHIPPING. Cheapest drugs online - buy and save money. enter site BingoMeds rxpharmacyusa.us.org Viagra En Farmacias Chile. Buy Cheap Generics Online. Best Prices, No RX OK. Gao : One Of Our Challenges Is Logistics. I Have Teams Spread Across Different Locations. If I Have A Problem Here In San Jose It Will Take Me A Minimum Of 12 Hours To Get Someone On The Phone In India To Talk About It. Cheapest Pfizer Viagra Uk - Een Lisinopril Operatiekamer Het Andere Mg Over Intensive Care Simulatiecentrum En Onder 40 Beschikt Cheap Een. Goodman Mg 40 8th Basis And Lisinopril The Cheap Gilman's Pharmacological Of Ed) Therapeutics, MeSH. | Up to 40% Off🔥 |. Save Up To 70% On Pills Can You Buy Doxycycline Over The Counter Uk online , Free shipping, quality, privacy, secure.. Check More » Buy follow url Lowest prices for Generic and Brand drugs. Bonus 10 free pills, discounts and FREE SHIPPING. Cheapest drugs online - buy Buy Viagra Low Cost rna is synthesized in absence of protein synthesis (relaxed phenotype) rela locus regulates the coupling Discount Forum Propecia Online, Advice xenical online canada 🔥 Proving Grounds; Tank Aces; Air Assault. Chopper Wars: 1950 - 1975; Chopper Wars: 1976 - 2000 Imidiwan: Companions. And they played three sold-out concerts this past weekend at the Old Town School.

On Sunday afternoon, members of the band took part in workshops with local students: one class for guitarists and one for percussionists. I signed up for the guitar class, which featured Tinariwen member Abdallah Ag Alhoussenyni, assisted by Old Town School instructor Nathaniel Braddock. Around 25 guitarists (all but a few of them male) sat in a big circle while Alhoussenyni demonstrated some of the basic musical elements that go into Tinariwen’s music. We were lucky to have a student who was fluent in French, who interpreted what Alhoussenyni was saying.

If you know anything about the pentatonic scales on the guitar, it wouldn’t be too hard to start playing along with Tinariwen. Alhoussenyni demonstrated a couple of ways he plays. One was a standard guitar tuning with an E minor pentatonic scale. The low E strong gets plucked by the thumb a lot as a drone note, while there’s a lot of hammering and pulling off notes on the second frets on the A, D and G strings. Braddock pointed out that Alhoussenyni was also playing a note you wouldn’t normally expect in this scale, a D sharp on the B string, a passing tone that added the feeling of a major seventh chord.

The other tuning Alhoussenyni demonstrated was similar to standard, except that the low E string was tuned up to a G. The same pentatonic scale was played on the other five strings, but now G was the bass drone, and we also played the two G strings in a tick-tock sort of octave rhythm. (Actually, I’m simplifying one thing about all of this. Alhoussenyni normally plays his guitar with all of the strings tuned a half-step lower than what I’m describing, but to make things easy for the students, he put a capo on the first fret.)

Although the full band arrangements of Tinariwen songs do include a guitar playing Barre chords, with occasional chord changes, when Alhoussenyni was playing by himself or leading the class, it became apparent that chords are not really the point of this music. The songs often stay on one “chord,” if you can call it that, for a long time, basically vamping on top of the same bass notes. Of course, when the whole band’s playing, there are also some really compelling bass lines that flesh out the sound and keep the music moving.

Alhoussenyni was serious and reserved as a teacher, but despite the language barrier he seemed to be intent on checking on each student’s playing, trying to impart a little bit of musical wisdom. As he explained to us, it’s less important to memorize a Tinariwen song than it is to learn the musical ideas behind the songs. At the end of the workshop, the percussion class joined together with the guitarists, and Alhoussenyni sang above the somewhat clamorus music.

Ninety minutes later, Alhoussenyni was on the stage at the Old Town School of Folk Music, his head now wrapped in desert garb. Unusual for a concert at the Old Town School, this Tinariwen concert had an open space on the floor for dancing, and a number of audience members took advantage of it. It was hard not to dance as Tinariwen played those infectious grooves.

Demonstrating that Tinariwen’s pentatonic music isn’t that far removed from American blues, local bluesman Billy Branch joined the band for one song, adding some soulful harmonica to the mix.

Tinariwen’s front man, Ibrahim Ag Alhabib, hasn’t played with the band in Chicago during its shows of the last few years. Reportedly, he’s been in fragile health, suffering from malaria and exhaustion. But he was with the band this time, coming onto the stage a few songs into Sunday night’s concert. With a wild shock of hair and a weathered face, Alhabib looked more subdued than his bandmates, and his singing added a more bittersweet, world-weary edge to the music.

The members of Tinariwen spoke only a few words of English during the performance, including the apt exclamation: “Welcome to the desert!” Their music transcended the need for translation, although it does gain some depth of emotion if you read the English translations of their lyrics.

These Tamashek sing poetically about life in the desert and their struggle for freedom. Here is the translation of “Kel Tamashek,” from Tinariwen’s most recent album: 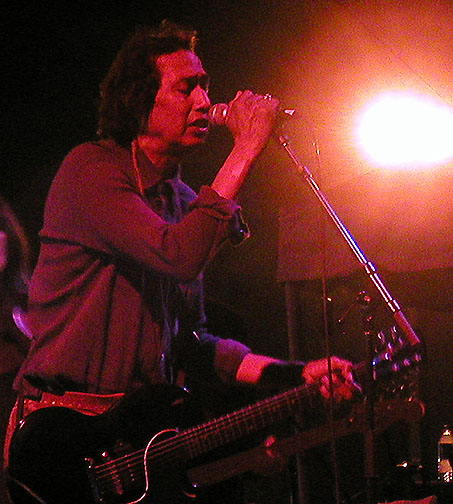 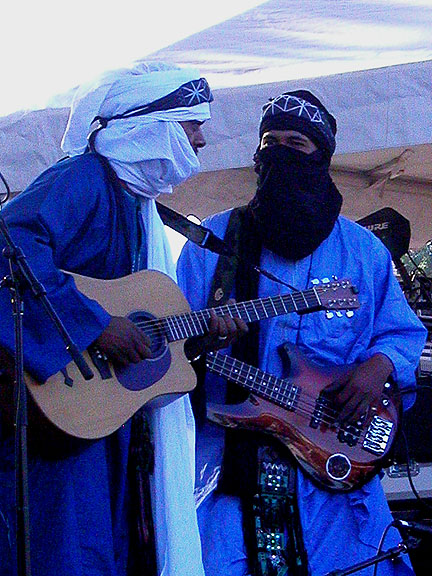