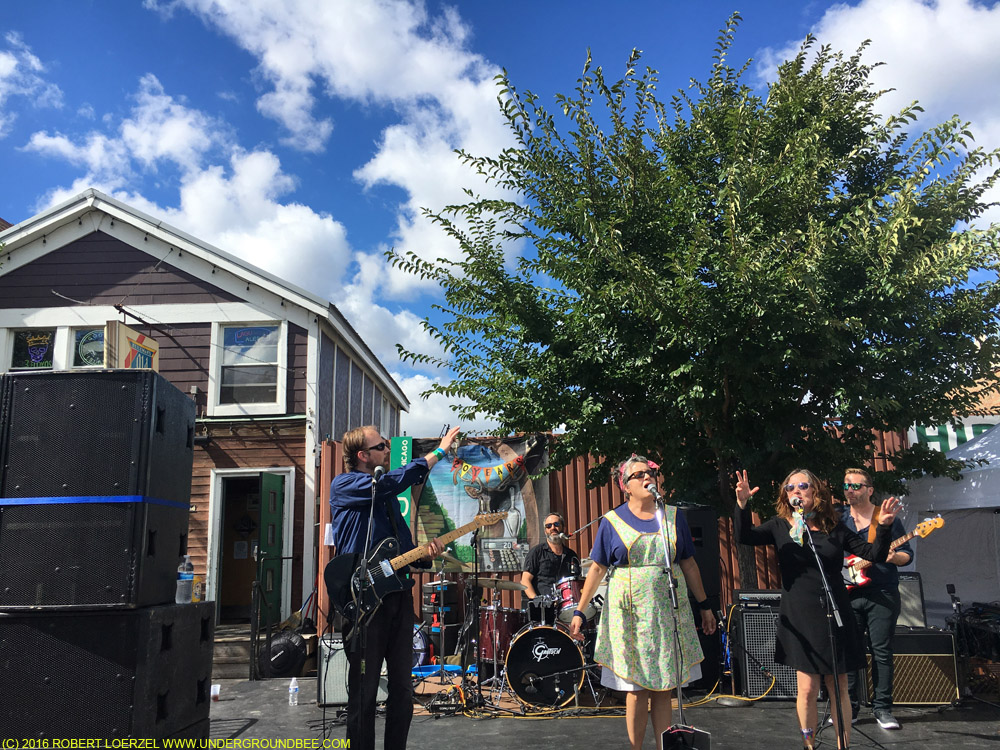 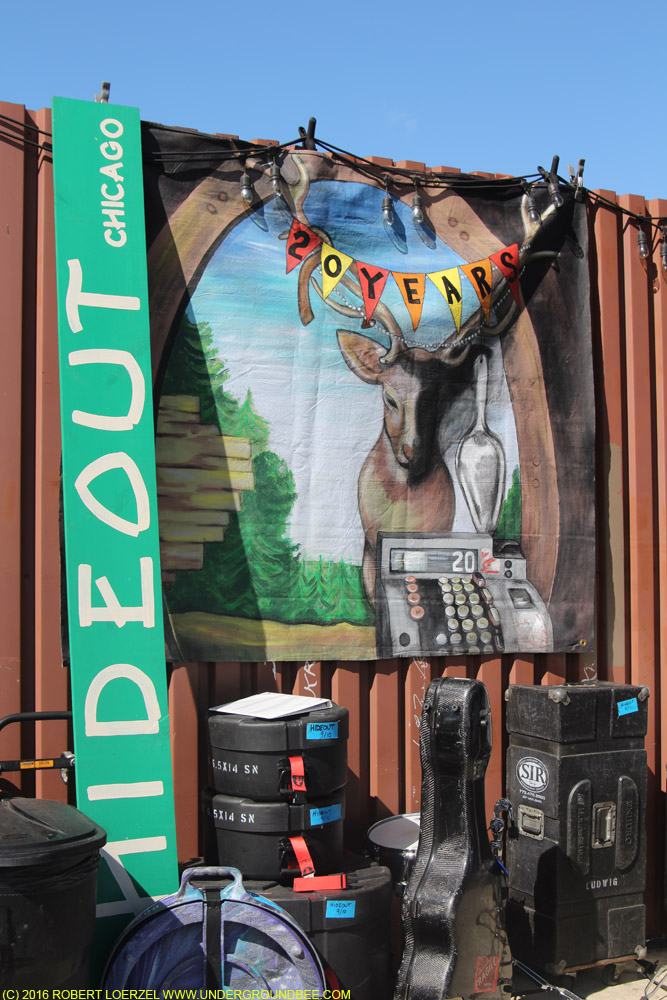 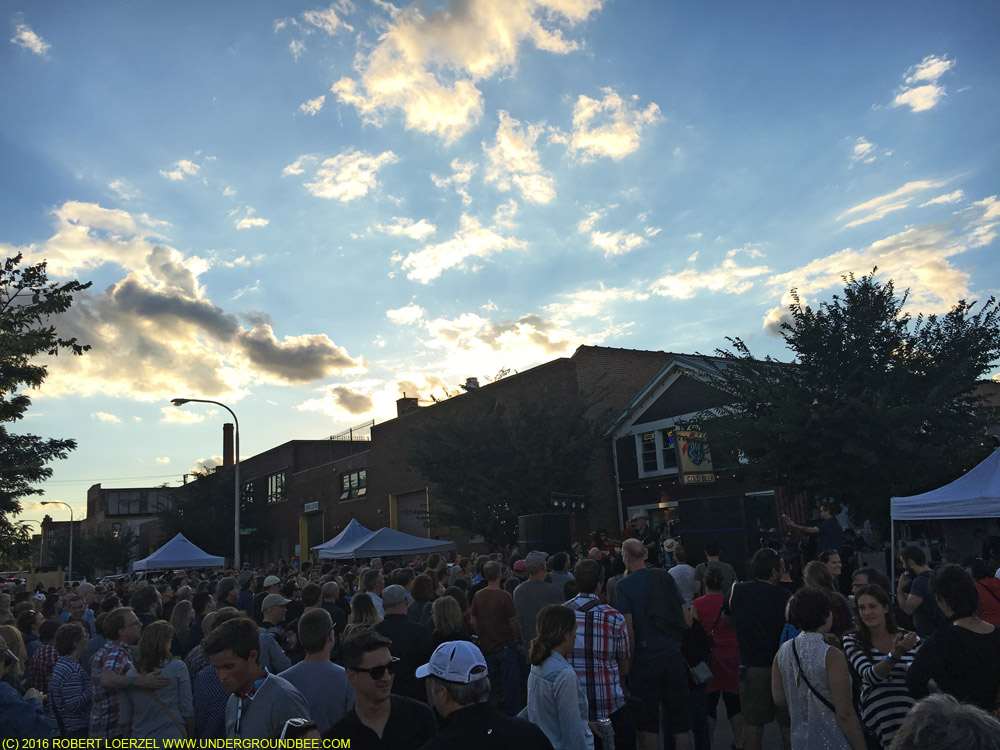 It was a gray and rainy day, rather cool for this time of year, so it was hard for me to get motivated to show up early for the block party. I managed to get there in time for Tara Jane O’Neil, whose solo guitar songs sounded promising to me; I’ll have to hear more. Of the other bands today, Seam, the Black Heart Procession and Pinback were pretty good, though nothing really blew me away. Brick Layer Cake — with his stilted rhythms on guitar and largely tuneless singing — turned off some listeners, but I found it pretty funny. Not something I’m likely to listen to much, but worth seeing at least once. CocoRosie was the strangest act of the day, if not the whole festival, with harp, operatic singing and African rapping all blended together in a surreal stew. Not for all tastes, but fascinating.

I’d seen Calexico twice in the last few months, so I wasn’t all that eager to see their fest-closing set — but they reminded me again how good they are. In fact, because the sound was better, this struck me as a much-improved set from their performance at Lollapalooza. And it was a fine way to wrap up the block party.

An assembled mass of old punk fans, predominantly dressed in black, with short-cropped hair, is gathered in the parking lot where the city of Chicago normally keeps its garbage trucks. I hear clusters of people speaking in German or Japanese. The faithful have gathered to hear reunions and long-awaited shows by some of the, um, “seminal” bands that shaped post-punk’s sound. As Steve Albini notes during the evening set by Big Black, a lot of people talk about the history of punk as if it skipped straight from the Sex Pistols to Nirvana. Well, this day was all about what came in between.

I showed up in time to see and hear a galvanizing performance by The Ex, a long-running band out of the Netherlands I’ve only discovered recently. Then came pulverizing punk by Killdozer, a collaboration between Jon Langford of the Mekons and Kat of the Ex (a phenomenal drummer who is bringing out some interesting sides of Langford’s guitar playing) and the cheeky Didjits. P.W. Long’s solo acoustic music didn’t impress me much, and neither did Negative Approach, one of the first bands signed to Touch & Go lo so many years ago. They struck me as pretty straightforward punk, nothing all that interesting (god, that lead singer knows how to sneer, though). As I stood in the photo pit, I felt something hit me lightly on the shoulder. I looked down. It was a toothbrush, thrown in my direction by someone in the crowd.

Another Mekon was up next, Sally Timms, doing those fractured and odd arrangements that have characterized her music of late. It’s an acquired taste, but I’m starting to acquire it. (Too bad the entire Mekons crew wasn’t available to play at the block party — to me, they are one of the seminal Touch & Go bands.)

Scratch Acid played a chaotic, incredibly energetic set, featuring the famous antics of singer David Yow. He’s been compared to Iggy Pop, and I can see why (though Iggy looks a lot better with his shirt off). At one point, Yow leapt into the photo pit and grabbed Touch & Go owner Corey Rusk. I was a couple of feet away, not sure exactly what was happening. I snapped some pictures, including one of Rusk apparently biting Yow on the hand. A playful bite, I take it.

Man … or Astroman? had the coolest set of the festival. (Actually, they had just about the only “set” that went beyond a basic set-up.) TV monitors, spiral yellow tubes, space-age junk… you get the idea. The mostly instrumental space surf guitar music was fun, if nothing super special.

The biggest event of the day for most people was probably the brief reunion of Big Black’s original lineup. As promised, it was short, with just four songs. The Big Black show began with Albini tossing some lit firecrackers onto the stage, which scared back us photographers as they popped (I felt a spark or two hit me, but have no injuries to report). At one point Albini remarked that the audience could probably pick up on the fact that they weren’t thrilled to be doing it — but that they were willing to do it for the sake of Touch & Go. (Gee, thanks for the enthusiasm.) The Big Black set was followed by a strong show by Albini’s current band, Shellac.

With the addition of the Touch & Go 25th anniversary theme, the Hideout’s annual Block Party has become a bigger affair than ever before. All three days sold out in advance? Wow. Well, I guess there are many fans of ’80s and ’90s punk-rock flocking to this event to relive their old glory days. I have to admit there are a lot of bands on the lineup that I don’t know all that well — in many cases, I knew these bands more by their reputation than their music. So I feel inadequate to the task of giving a really well-informed critique of their performances, but I was eager to see and hear what I’ve been missing.

As it all got under way, Hideout head honcho Tim Tuten thanked the city for allowing the Hideout to use the parking lot next to Wabansia, where garbage trucks are normally parked. He said the city workers had been cleaning up and preparing the area for the festival for the past couple of weeks — and a couple of the guys had asked him if Twisted Sister would be reuniting for the party. Yeah, he told them, they’re playing at 8 o’clock on Saturday. As always at the Hideout’s block parties, it’s strange but somehow fitting to see that hulking Department of Fleet Management building behind the stage, with old brick factories ringing the rest of the site. An industrial setting for Chicago rock music.

Friday night got off to a good start, with the Shipping News. I didn’t care much for the dance music of Supersystem, but the next set by Girls Vs. Boys was strong. I would have liked to stick around for Ted Leo and !!!, but I also had a ticket to see M. Ward and Oakley Hall at Metro (a must-see for me), so I headed uptown at 8 p.m.

SEE PHOTOS FROM DAY ONE OF THE HIDEOUT BLOCK PARTY.