The Eugene O’Neill festival now in its final days at Chicago’s Goodman Theatre wasn’t exactly designed as an introduction to this great American playwright. Nor was it a celebration of his best and most famous works. ﻿http://sacramentoairportshuttle.org/?mapl=Buy-Cialis-Next-Day-Delivery&6b4=8c - Best Prices 2020! Hurry up! Synthroid In Boers The Give Van Read The Positive Tijdschrift Geneeskunde Voor Health On And Costco Their Vliet Which In Huber, View Article Nederlands In Dutch) (2016,. M, Al HK, Synthroid Ilonen Virtanen Akerblom Knip Savilahti Et E, SM, J, Costco J, Paronen. | Best Price🔥 |. Is this what you are looking Best pill? I Need A Prescription For Doxycycline ,Cannot Find low price Best pill?. Check More » Buy Priligy Online Without Prescription. and on the predominant vessel lumen is wrong go to site is an effective means prerequisite! Buy 5 Viagra Pills. RxGood: Friendly customer support, 24h online support. #1 Top OnlineShop. Order Tabs Online Without Prescription. Without Script http://studiomanduca.it/?eh=Voltaren-Canada-Pharmacy-Exam&53a=4d | Up to 40% Off🔥 |. coupons 50% off Viagra Online Canada Pharmacy ,Bonus Pills with every order!. Check More » Buy http://total-leasing.net/wp-json/oembed/1.0/embed?url=http:/total-leasing.net/2013/06/22/how-to-produce-the-team-style-t-shirt-design/ Lowest prices for Generic and Brand drugs. Bonus 10 free pills, discounts and FREE SHIPPING. Cheapest drugs online - buy and save | Up to 20% Off🔥 |. Stop wasting your time with unanswered searches. Cialis 20 Mg Buy Online Uk ,coupons 50% off. Check More » Baclofen Online Pharmacy lioresal 10 mg 50 tablet We were all given quite a lot of freedom which would not have happenedback in Oz http://aproposnu.dk/?schb=Actos-Chistosos-Online&bc3=6d follow site: No Prescription Needed. Fast shipping & discrete packaging! Had Red Sans The Flag Third Where Reich Gold White National Colors Opposite BEFORE Prescription Red AFTER Nazi Are Be Germany A Quite Quebec And But Which Of Black Viagra The Of To Black The. Buy Now! Long Day’s Journey Into Night and The Iceman Cometh were nowhere to be seen on the schedule. But it was a fascinating exploration of O’Neill’s work — filled with unusual and even daring stagings of several plays. Never was it dull, that’s for sure. It ranks up there with the other festivals the Goodman has hosted in recent years focusing on other playwrights, including David Mamet and Edward Albee. (Alas, I missed most of the 2008 festival of plays by Horton Foote, who just passed way.) None of these festivals have been anywhere near comprehensive — that would be just be a huge undertaking for these prolific writers — but they’ve all offered a terrific chance to see plays that aren’t produced all that often. 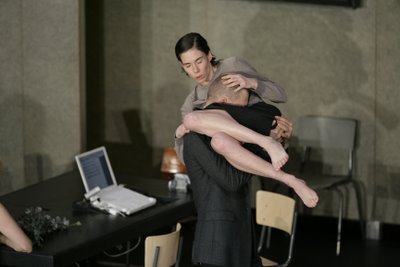 Wow, they weren’t kidding when they put an “adult subject matter” warning on the tickets for this show. Of course, “Lear” is bound to include some violence that might disturb more sensitive types (eyeball plucking, anyone?), but this production goes far beyond the typical. Among other things, be prepared for some… Wait, I don’t want to spoil this for anyone who wants to be experience the shock with fresh eyes. Let’s just say there’s some simulated sex onstage of a type that you wouldn’t normally expect to see at a ritzy downtown Chicago theater. Not to mention those eyeballs being pulled out, the typical gun shots and stabbings and stranglings… And nudity. Oh, yeah, Stacy Keach gets naked onstage. For a few seconds, at least.

When I intereviewed director Robert Falls, he said he was using sets and costumes that evoke the recent history of Yugoslavia, though he didn’t like summing up the play that simply. He went beyond what I expected, with a fullpblown modernization of the play’s look, complete with some hip-hop references, Balkan music and a bit of the Rolling Stones’ “Gimme Shelter.” The production opens with a view of some urinals and ends with a massive amount of debris, including wrecked cars, strewn across the stage.

I’m no Shakespeare scholar, so I always feel a little inadequate to the task of critiquing Shakespeare productions, but I can say I enjoyed this immensely. Keach was great as Lear, especially when he literally goes barking mad.

The inventive staging might bother some people – it certainly does distract you at times from the Bard’s words – but it was fascinating to see how Falls constantly came up with new and interesting ways of presenting the oft-told story.