Last year, I skipped Lollapalooza. It was the first time I’d missed Lolla since it changed in 2005 from a touring festival to an annual Chicago event. My main reason: I simply wasn’t that excited about the musical lineup. I wasn’t thrilled about everything on this year’s schedule, either — with a reasonably diverse list of 150 musical acts, who could be? But this year, Lollapalooza definitely had enough quality bands to hold just about rock fan’s interest for most of the weekend. And the inclusion of the Arcade Fire as one of the headliners clinched it for me. There was no way I was going to miss this.

Overall, Lollapalooza 2010 turned out to be a pretty good time. I saw several great sets, several good sets and some mediocrity. There were a few moments of feeling trapped inside crowds, getting rained on and stepping in mud, but for the most part, it was a pleasant experience. The addition of Columbus Drive as a pedestrian thoroughfare did make it easier to get around the festival grounds.

I reviewed Lollapalooza for Pioneer Press, including an overview of the festival and the headliners. And I also blogged here with some thoughts inspired by the Arcade Fire’s closing set on Sunday.

As always, it was impossible to see everything I wanted to see. So, yeah, I missed Devo, Spoon, Rogue Wave, Gogol Bordello, Warpaint, Nneka and major chunks of the shows by MGMT, the Drive-By Truckers and Social Distortion, to name just a few. During Friday night’s headline sets, I caught the first several songs by the Strokes (who sounded pretty tight) before heading to the other end of the park for the last part of Lady Gaga’s overblown, screechy spectacle. 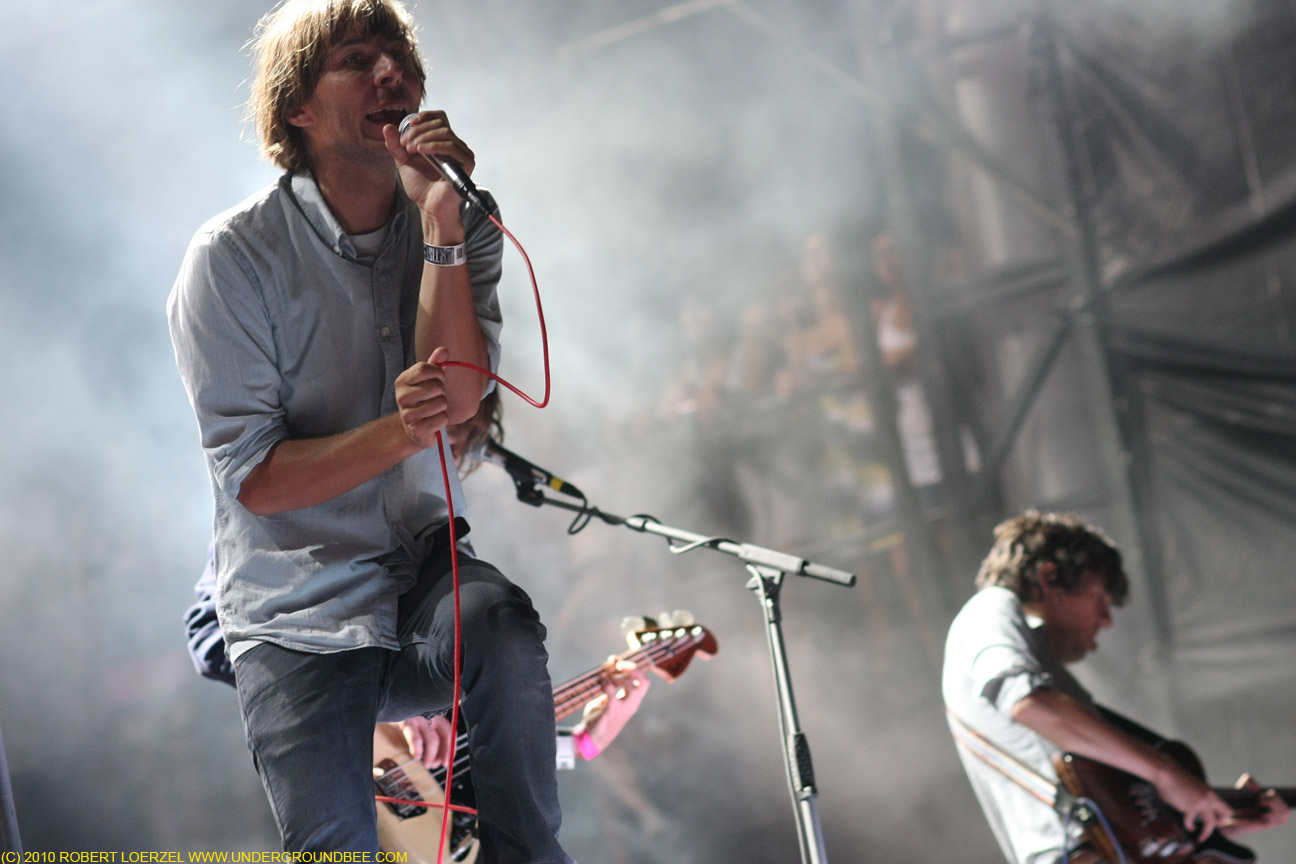 I also dashed back and forth Saturday night. I began with Green Day setting off fireworks, and then I went north and watched most of the show by Phoenix, and then I went back to see Green Day set off more fireworks. By that point, the show had devolved into an oldies medley with “Satisfaction,” “Hey Jude” and “Shout.” What was this, a rock concert or a wedding? And Phoenix still hasn’t won me over yet, either. When I was in the photo pit for the first three Phoenix songs, the band’s energy impressed me, but I just don’t find the tunes all that interesting. 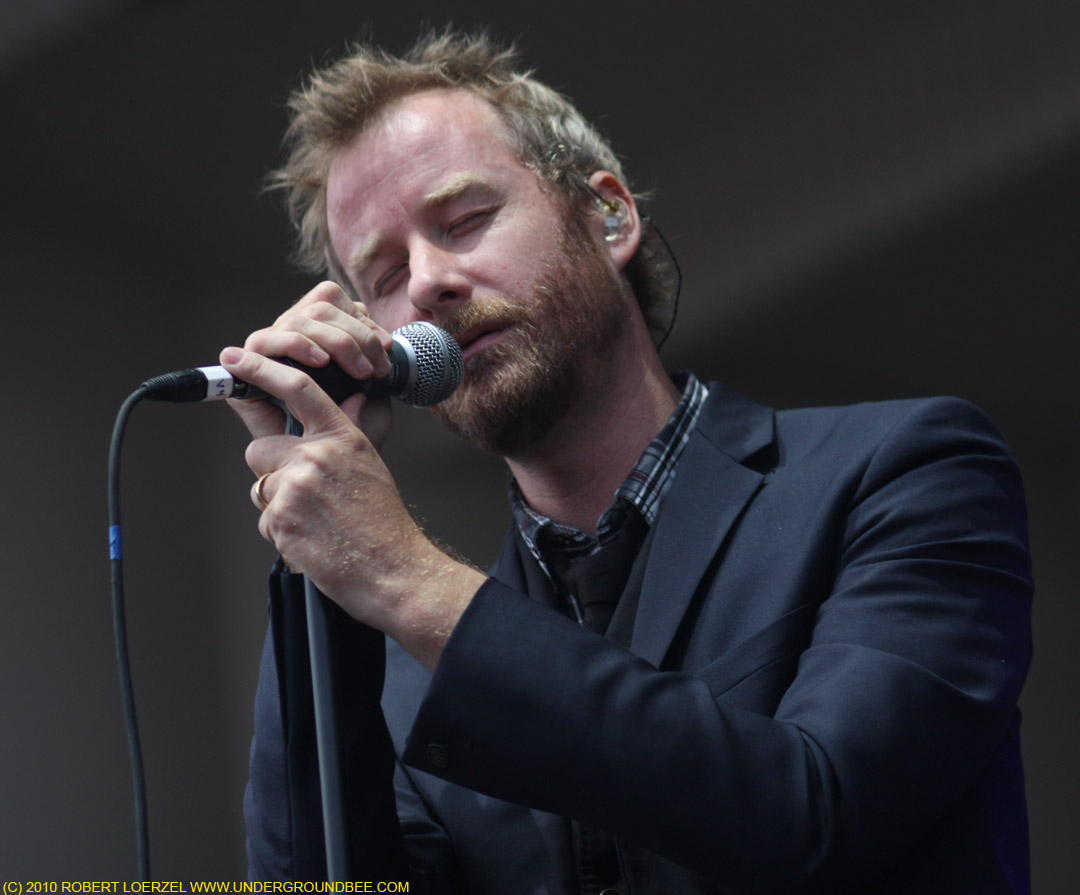 On Sunday night, I tried to stay in one place. While I would have liked to see at least part of the Soundgarden show, I didn’t want to miss a moment of the Arcade Fire. And I also wanted to see the National, who were playing just before the Arcade Fire on that end of the park. Alas, after catching the first half of a fairly strong set by the National (with a guest appearance by Richard Reed Parry of the Arcade Fire), I found myself standing across the field, waiting to photograph the Arcade Fire and trying to hear as much of the National as I could. Not an ideal way to experience the show. It sounded like the National finally broke out of their low brooding mood later on during the set. 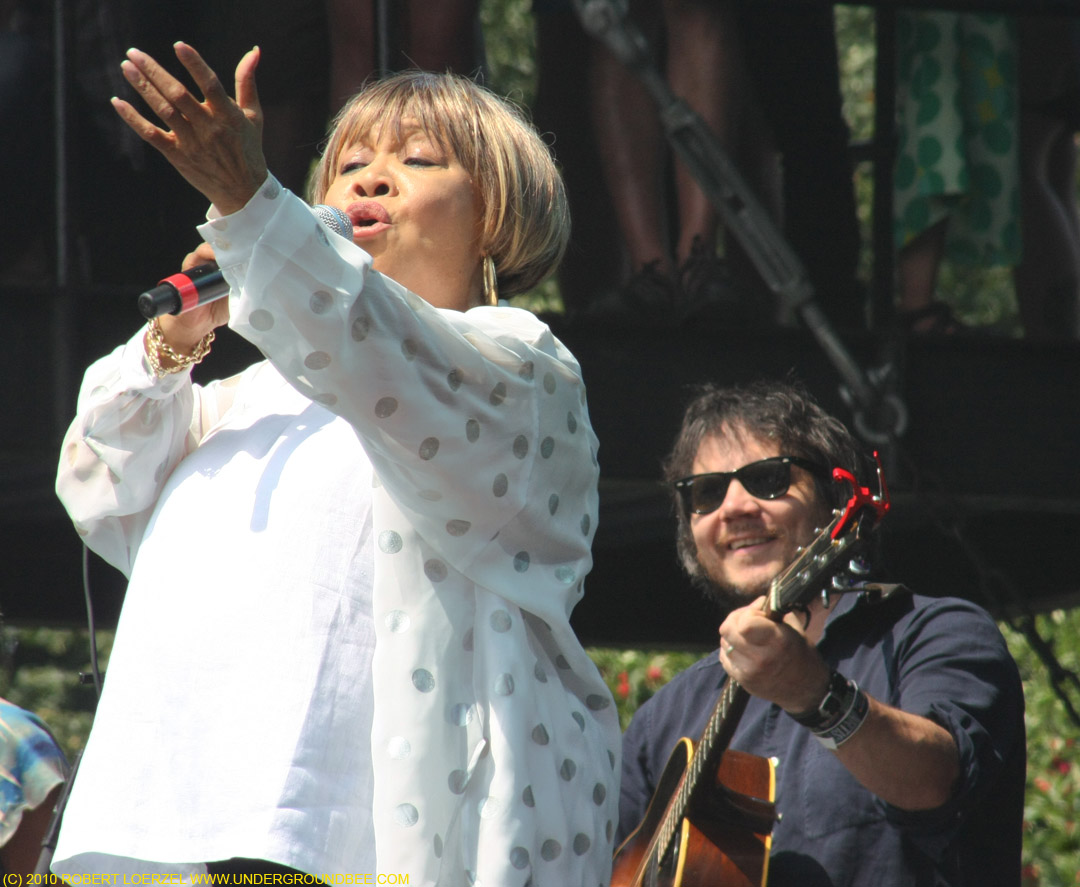 Other highlights of the festival included Mavis Staples’ set on Friday. She and her backup vocalists began with some a cappella gospel, lifting their beautiful voices into the summer-afternoon air and singing, “I Am His and He Is Mine.” Later in the set, Staples introduced guest guitarist Jeff Tweedy “of the Wilco band,” who produced Staples’ forthcoming album, You Are Not Alone. He also wrote the title song, which sounded lovely in concert, bringing together Tweedy’s folk rock with Staples’ soulful vocals. 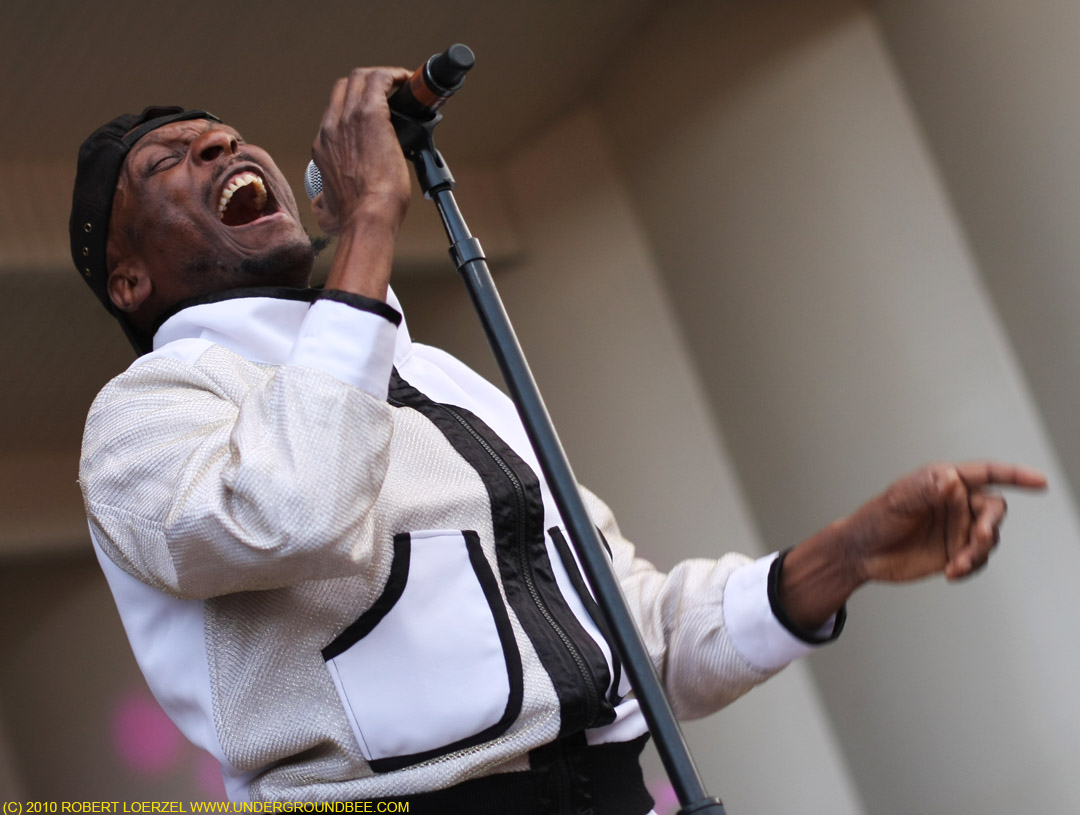 Another great set came Friday evening, when reggae legend Jimmy Cliff made a rare appearance. Cliff was considerably more exuberant and energetic than I’d expected for a performer who’s 62. He danced across the stage with a light and joyful step, even doing a few karate kicks. His voice had a weathered but strong quality as he played classic songs including “The Harder They Come,” “Sitting in Limbo,” “You Can Get It If You Really Want,” “Many Rivers to Cross” and covers of Cat Stevens’ “Wild World” and Johnny Nash’s “I Can See Clearly Now.” A good vibe was in the air, as the crowd clapped along. PHOTOS OF JIMMY CLIFF. 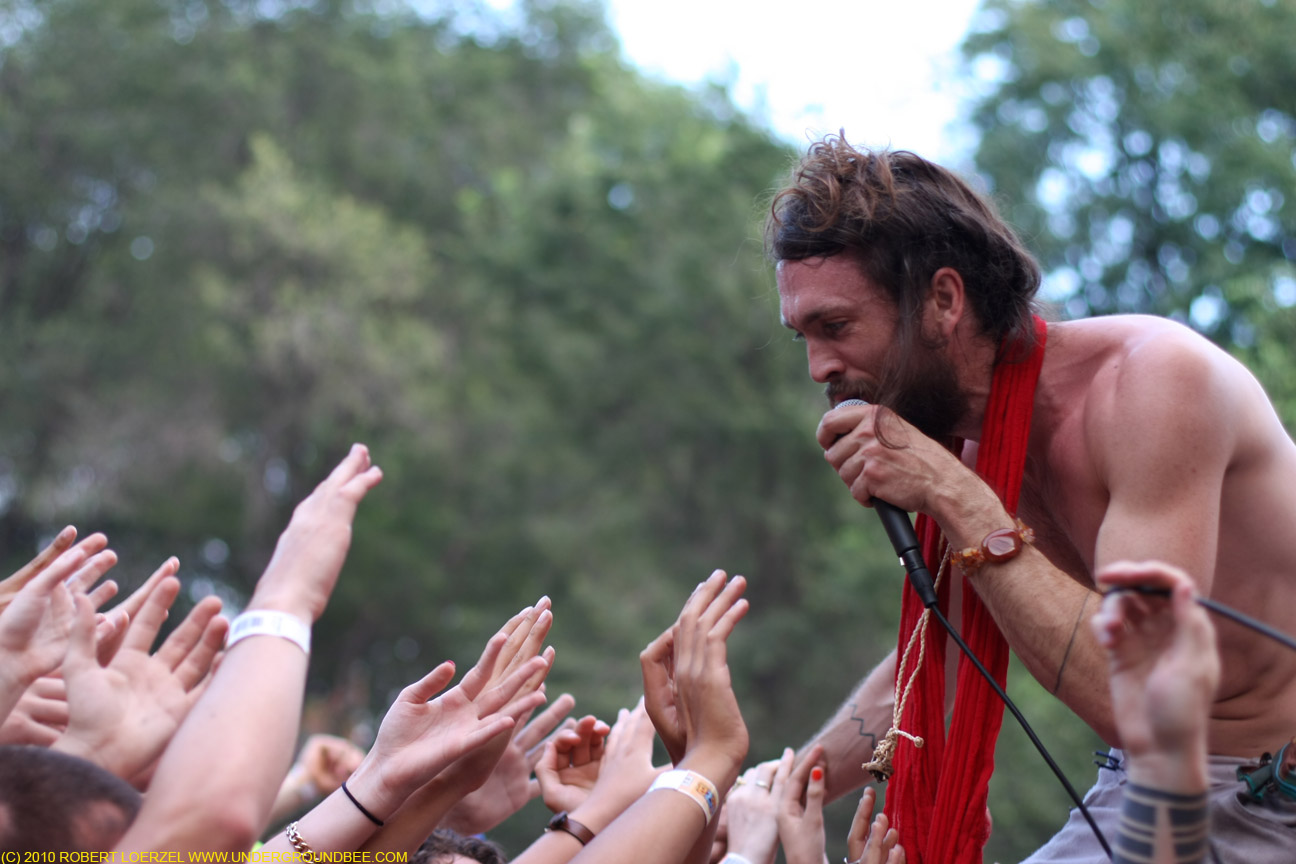 I was not prepared for the outlandish experience of seeing Edward Sharpe & The Magnetic Zeros. Having listened to the band’s record, somehow I expected a much more staid concert of the singer-songwriter variety. I didn’t realize Sharpe and his band have a fervent cult following — or that Sharpe likes to get right out into the crowd. The show had the feeling of a hippie circus, and some fans even climbed up into the trees. 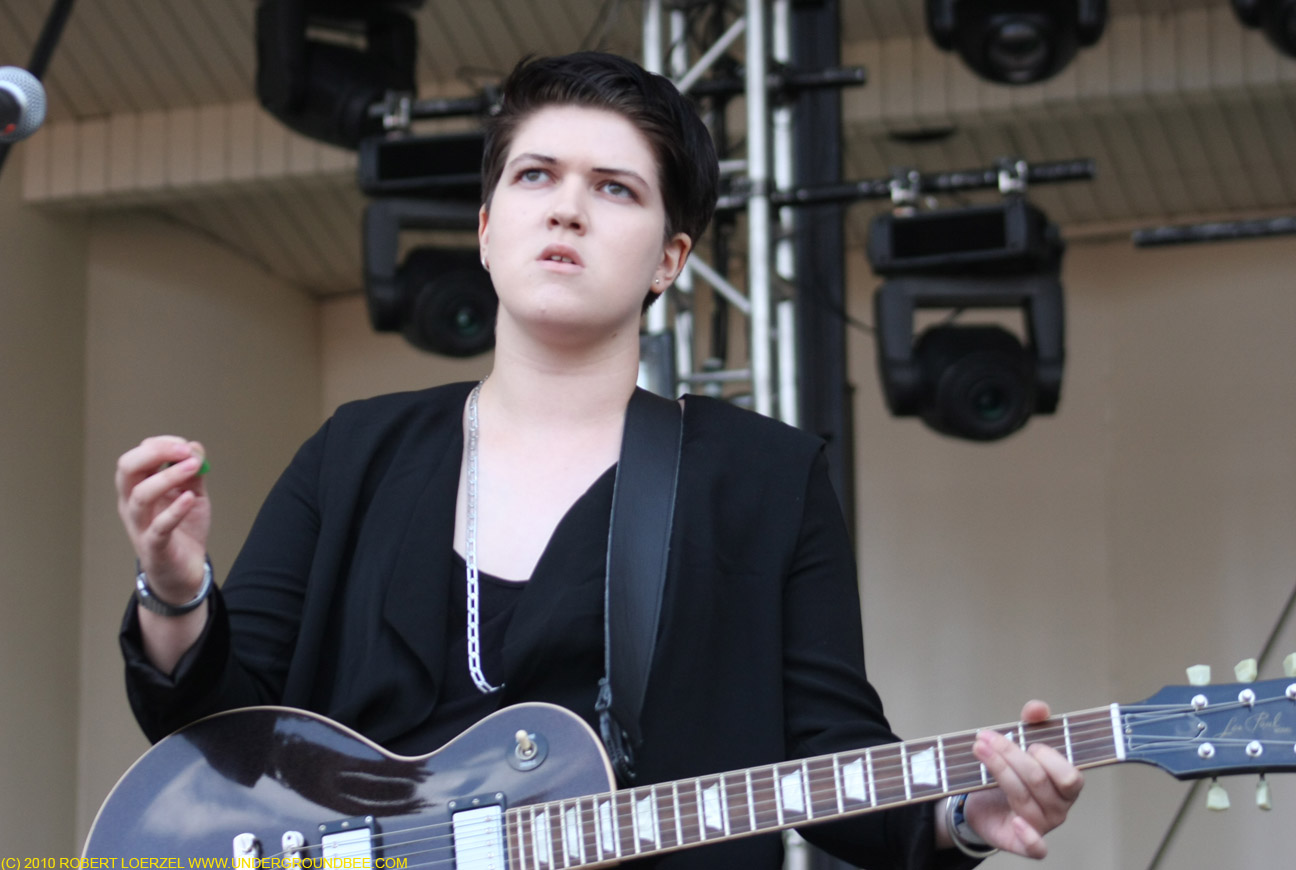 The XX were a little pale and restrained, looking and sounding as if they didn’t really belong outdoors under bright summer sunlight. But they drew a big crowd with their cold, minimalist tunes, and the sound was cool indeed. 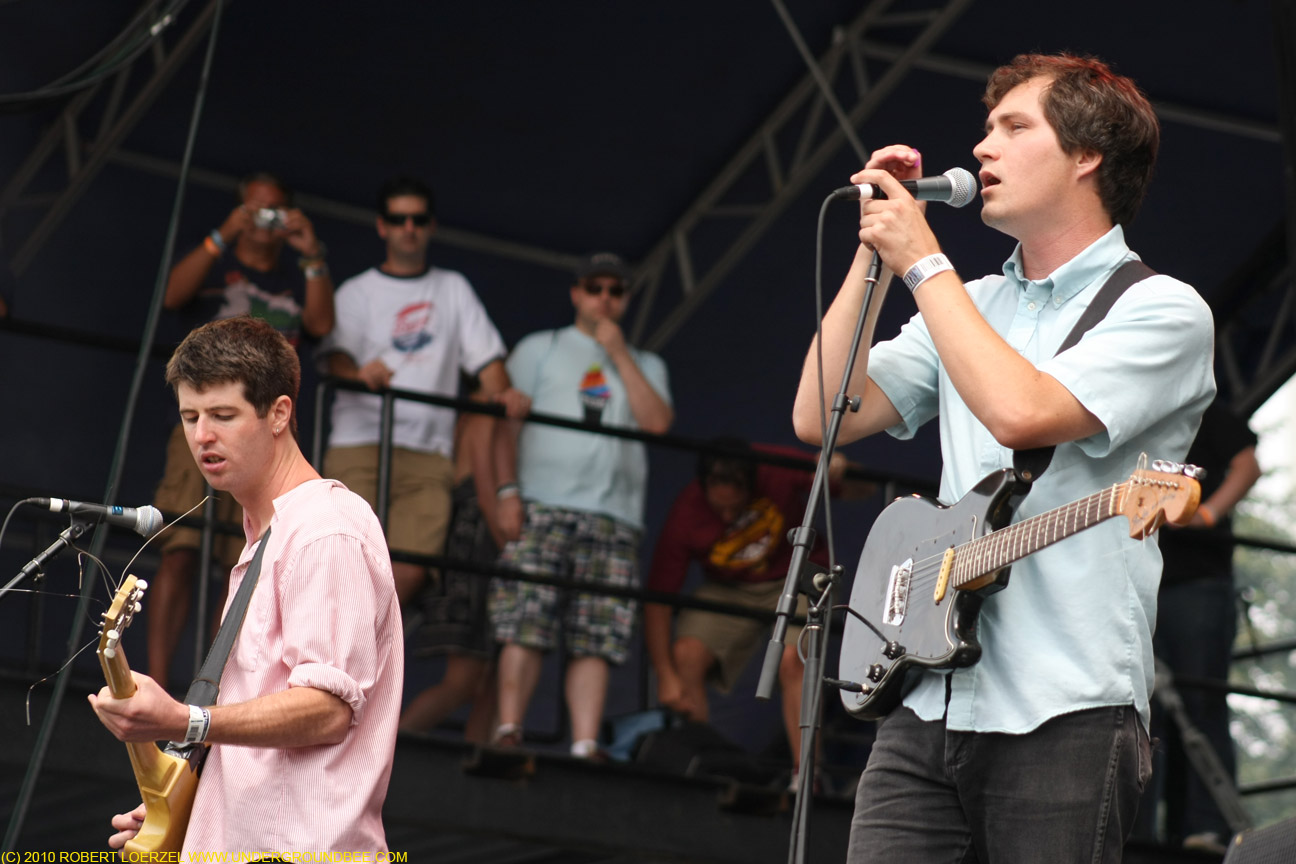 I wish I’d heard more garage rock at Lollapalooza, though the genre isn’t really well-suited to concerts on big stages where the crowd is so far away from the band. The Soft Pack were my favorite out of the scrappy young garage and punk bands that I saw, and I also enjoyed Wavves and Harlem. 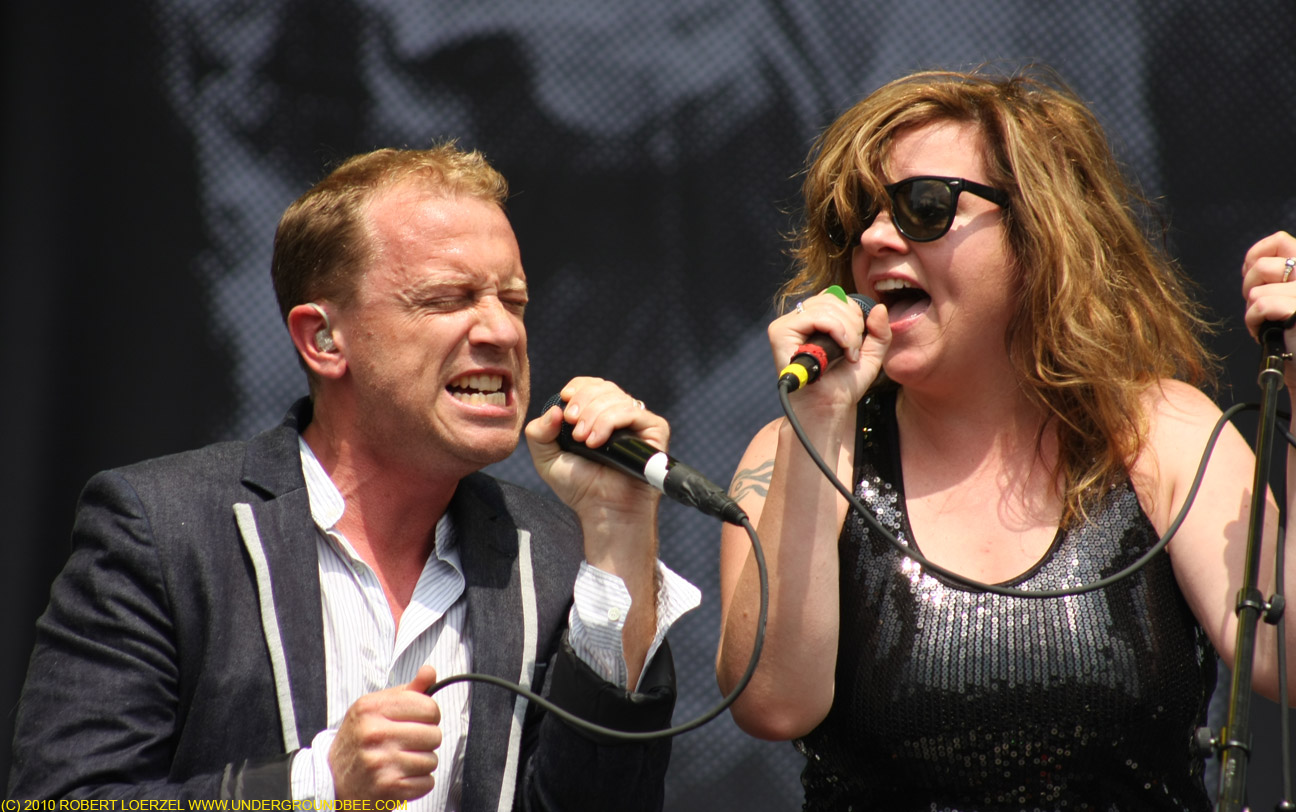 Stars were as emotional and appealing as ever (even if their most recent songs aren’t as memorable as the early ones). Meanwhile, the New Pornographers did what they always do well: play one upbeat, catchy power-pop song after another. Neko Case of the New Pornographers later showed up on guest vocals with the Dodos, who played an intriguing combination of acoustic blues with more angular rock. 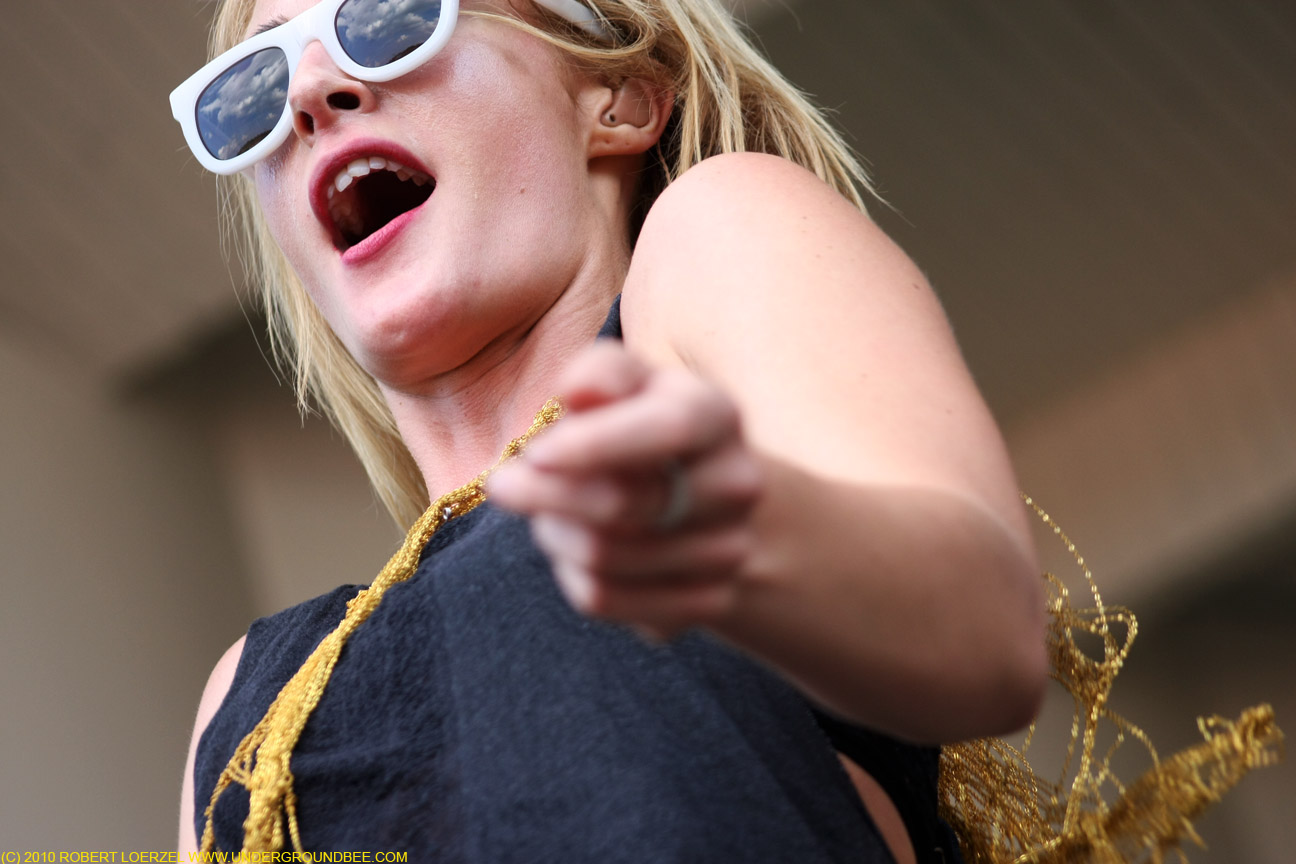 Metric’s Emily Haines seemed unstoppable as she sang and danced. I haven’t listened much to Metric’s records (and haven’t been that thrilled with what I’ve heard), but I can’t deny they put on a good live show. 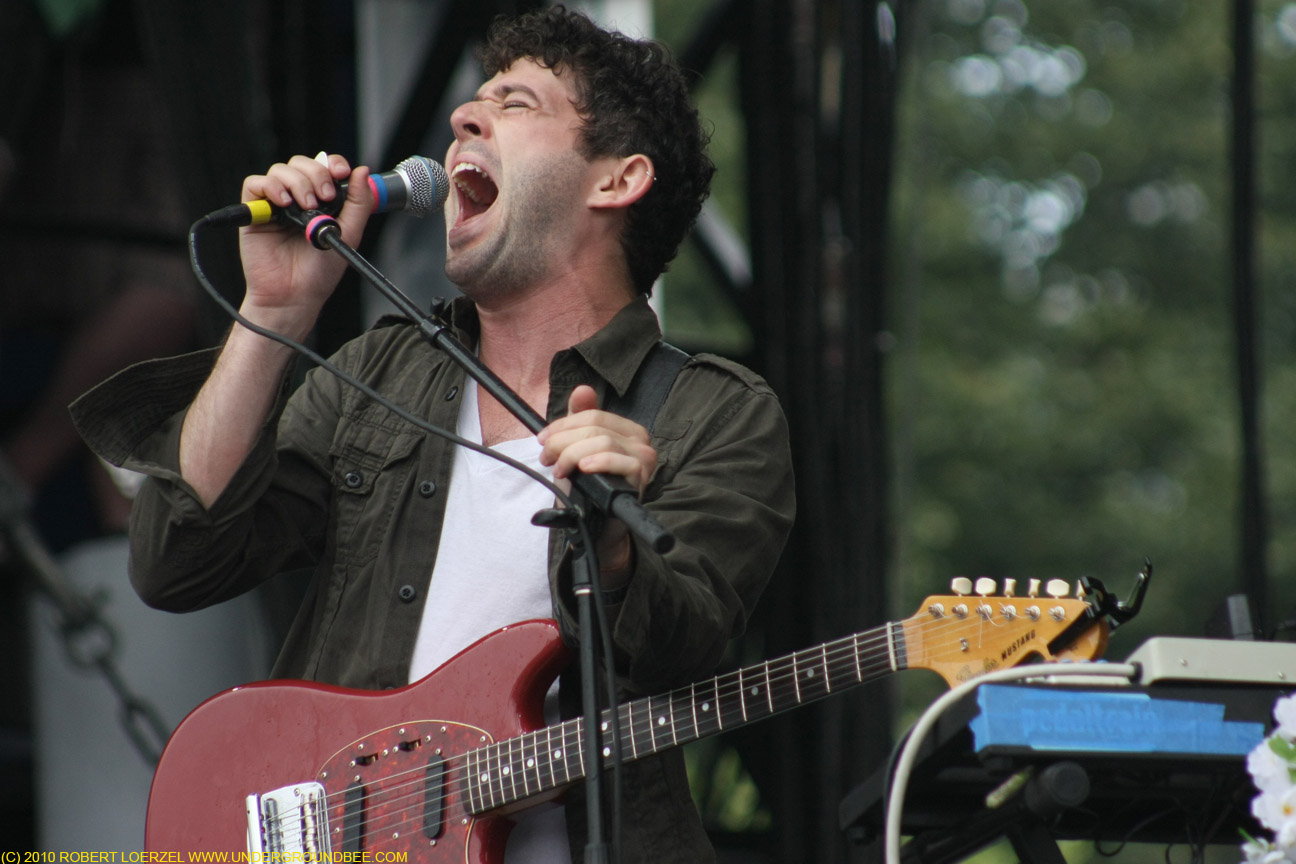 The Antlers sounded magnificent and epic when they played songs from 2009’s Hospice, but the band’s other songs were less dramatic. 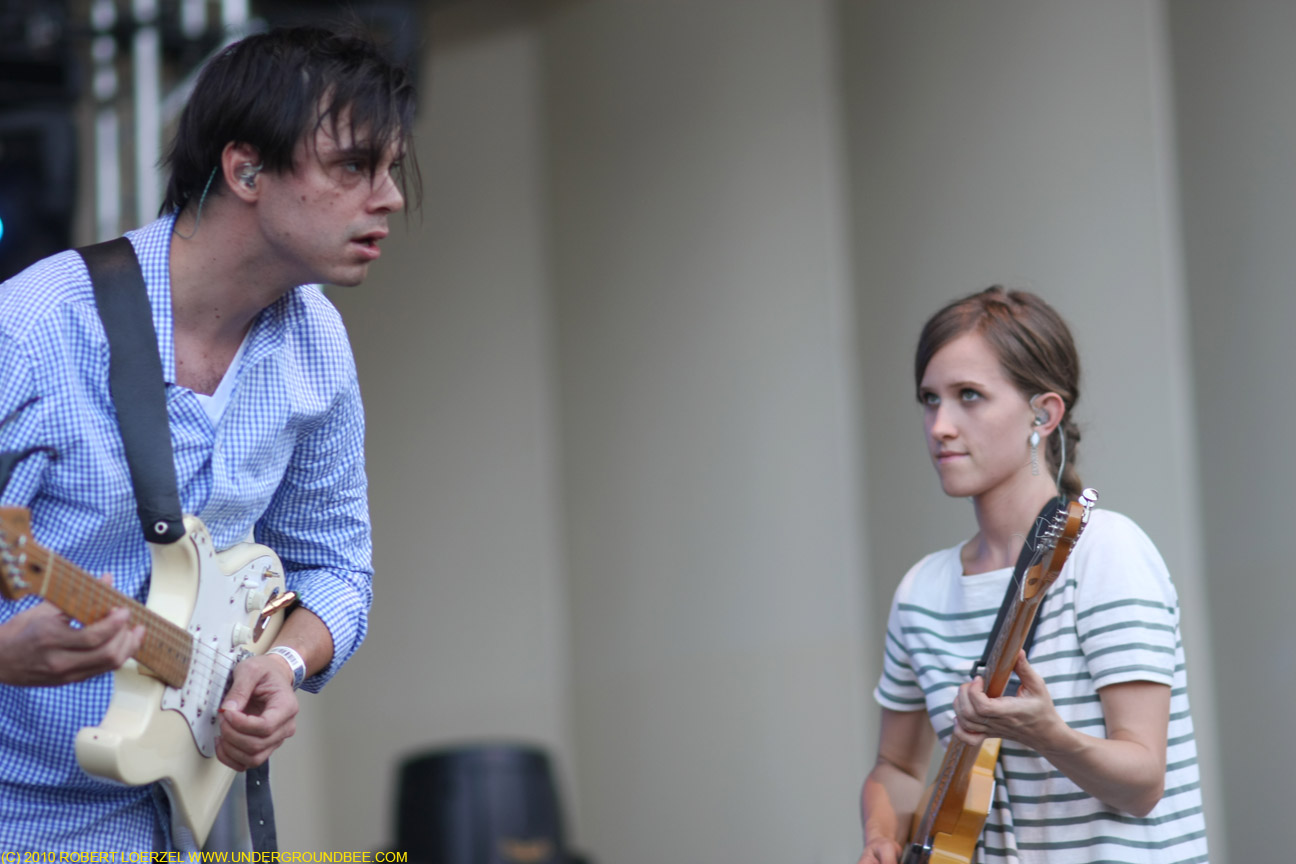 Dirty Projectors were the only band I heard talking about fonts during their stage banter. Their odd guitar lines and stunningly precise vocal harmonies created a sound that’s complex without being too off-putting. 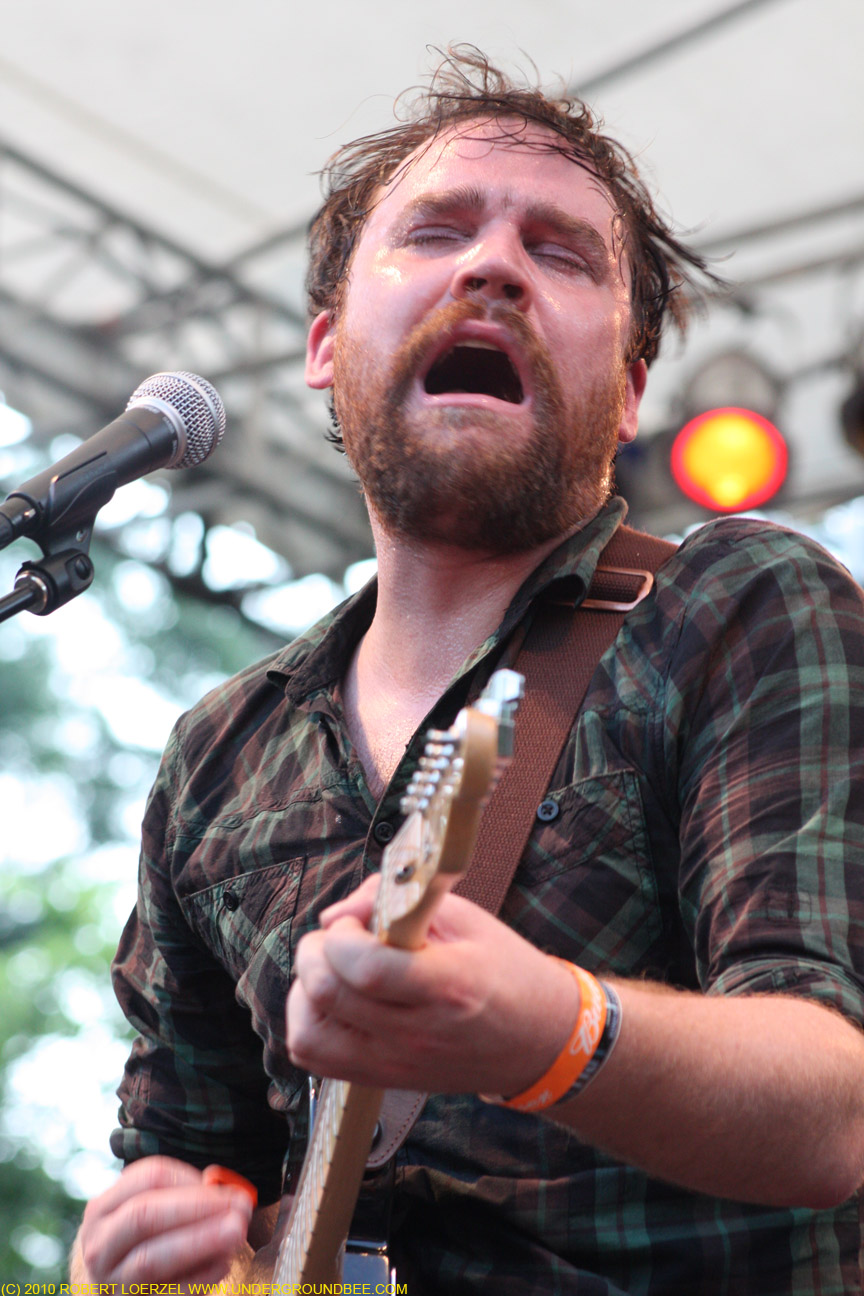 Frightened Rabbit’s Scott Hutchison seemed to be pouring everything he had into his emotional performance. 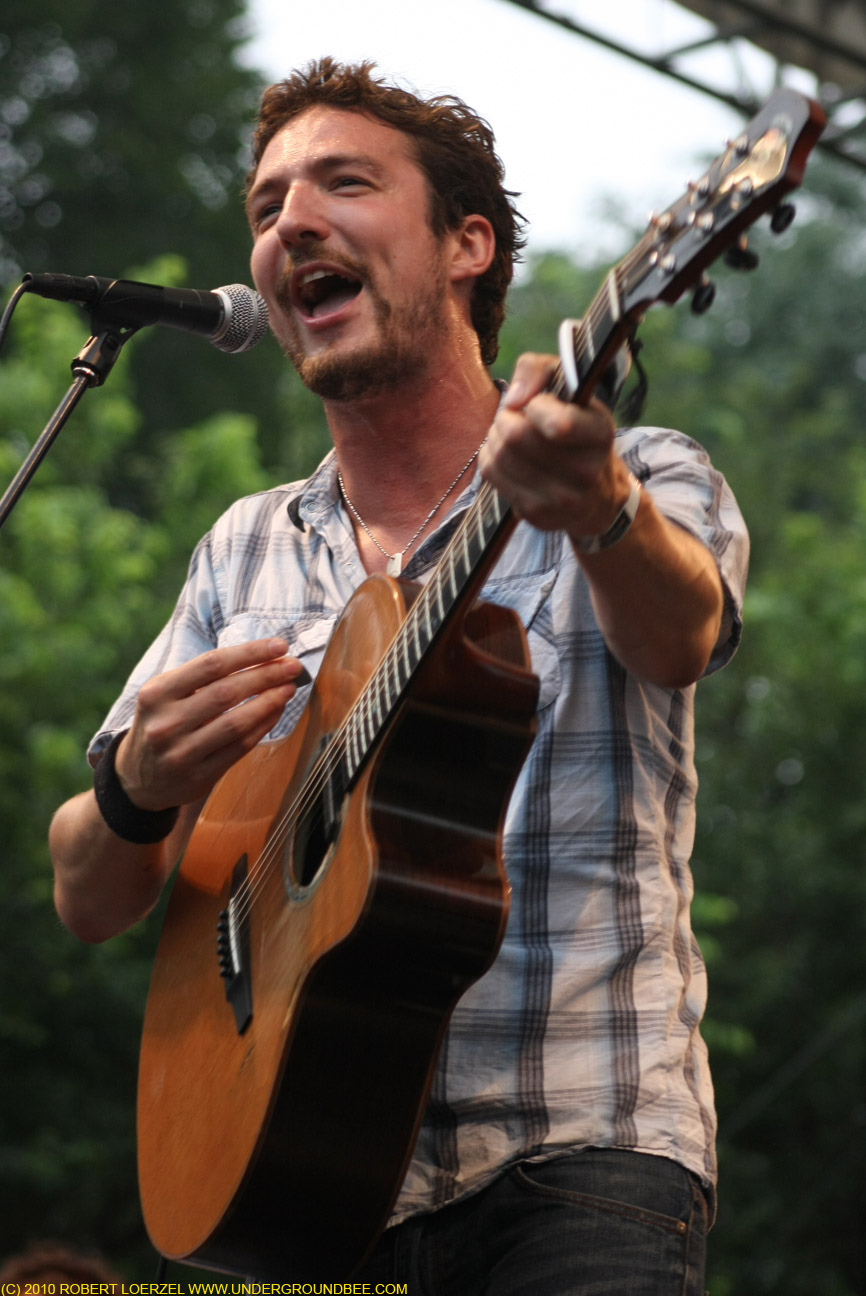 It was raining during the set by British singer Frank Turner, but the damp weather didn’t diminish the strength of his forcefully delivered acoustic rock. 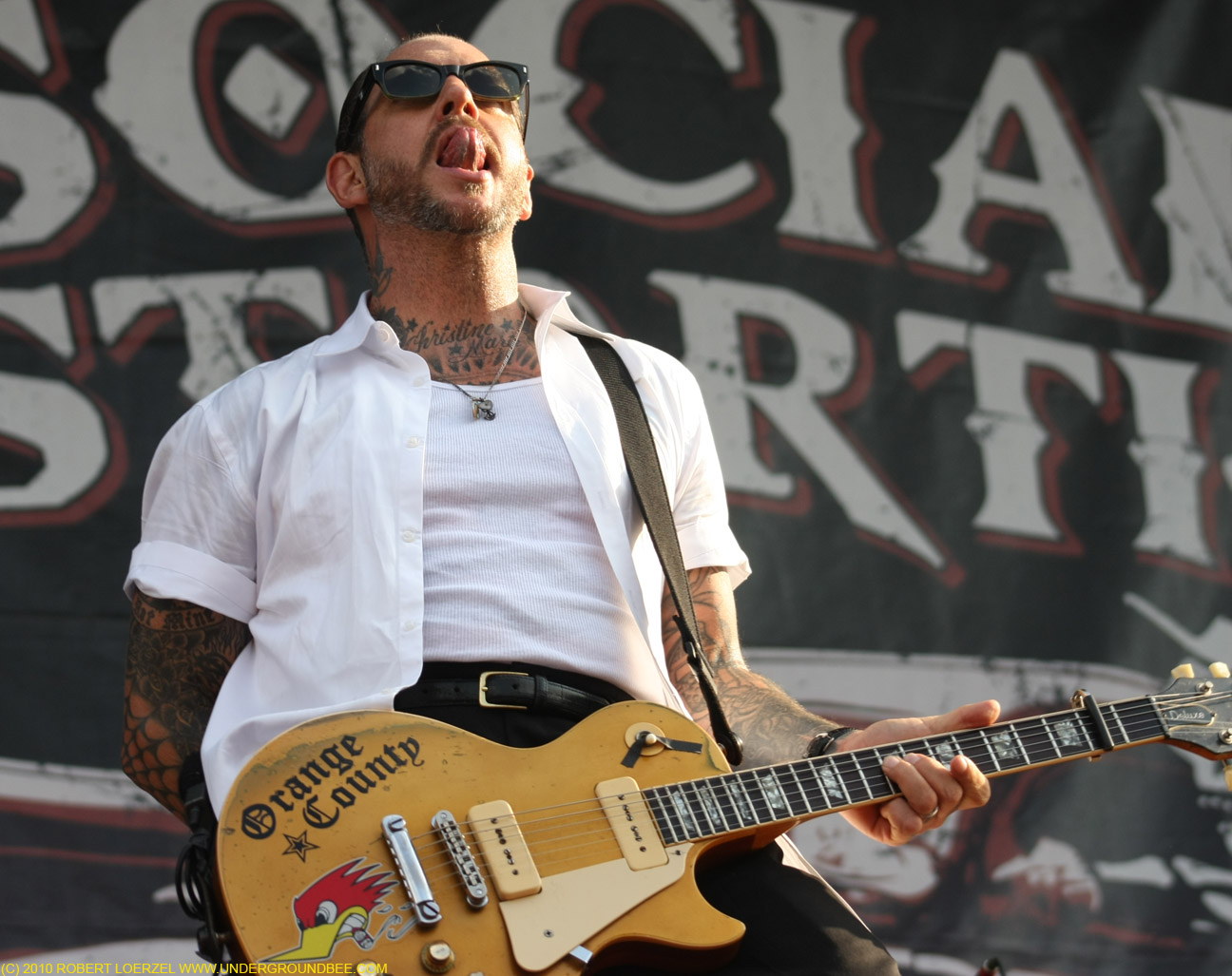 Other bands I liked: Social Distortion, Skybox, Mumford & Sons, the Black Keys, the Big Pink, the Walkmen, the Morning Benders and Grizzly Bear. MGMT sounded great when they played their cool new song “Brian Eno,” but I’m still not thrilled with the more popular music from their first album.

Despite the praise and hype that’s been heaped on them in England — and despite the presence of ex-Smiths guitarist Johnny Marr — the Cribs were pretty dull. 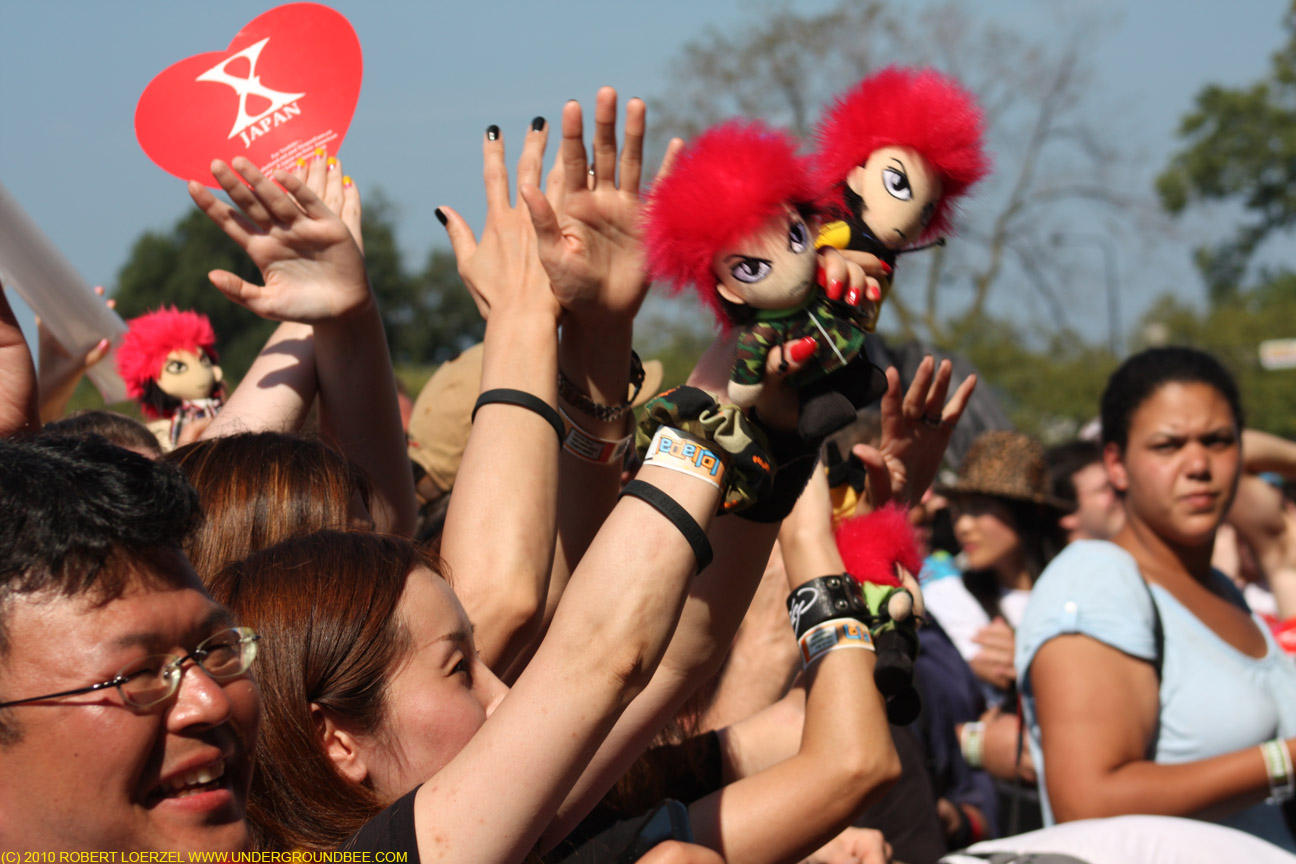 And I don’t understand all the excitement about X Japan, which is just a Japanese version of Western hair-metal music. Other hard-rock bands from Japan, such as Boris, are far superior. But it was interesting to see X Japan’s fans gathered along the barricade, clasping red-haired dolls. As at many other Lollapalooza sets, it was the fans who made the show.

MUSIC UNITES US (INCLUDING REVIEW OF THE ARCADE FIRE).

Photos from the rest of Day One at Lollapalooza 2010. (See the separate galleries I posted earlier for pictures of Jimmy Cliff, the Strokes and Lady Gaga.)

This gallery includes photos of Wavves, the Walkmen, Mavis Staples (with Jeff Tweedy), the Big Pink, the Drive-By Truckers, the New Pornographers, the Dirty Projectors and the Black Keys.