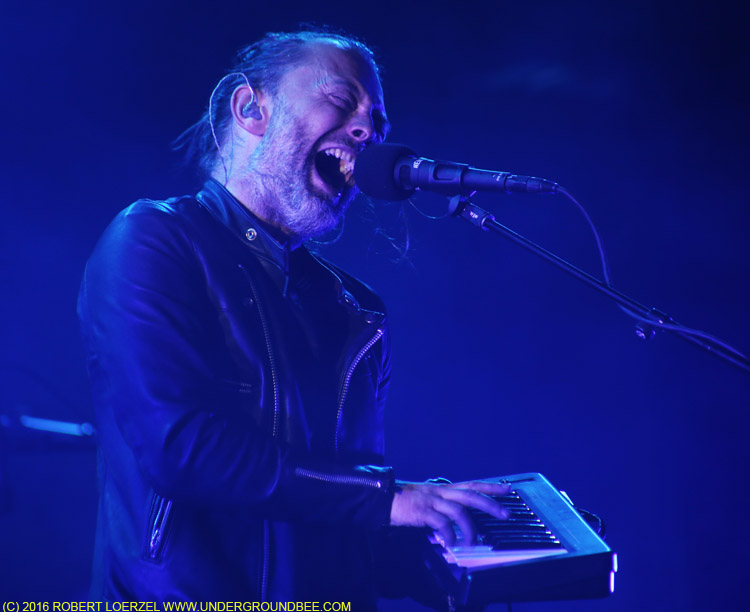 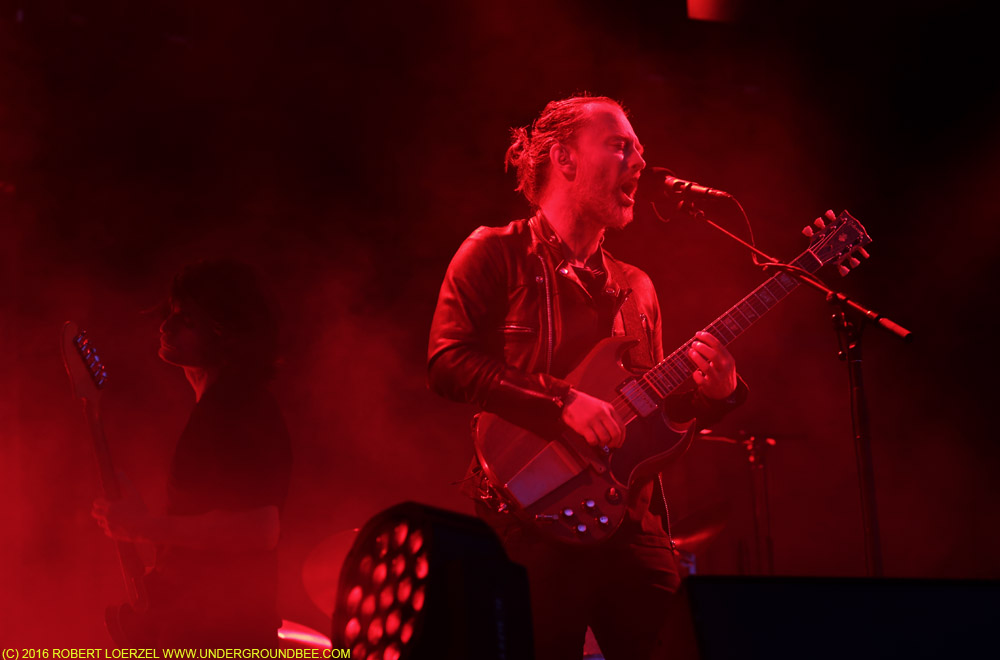 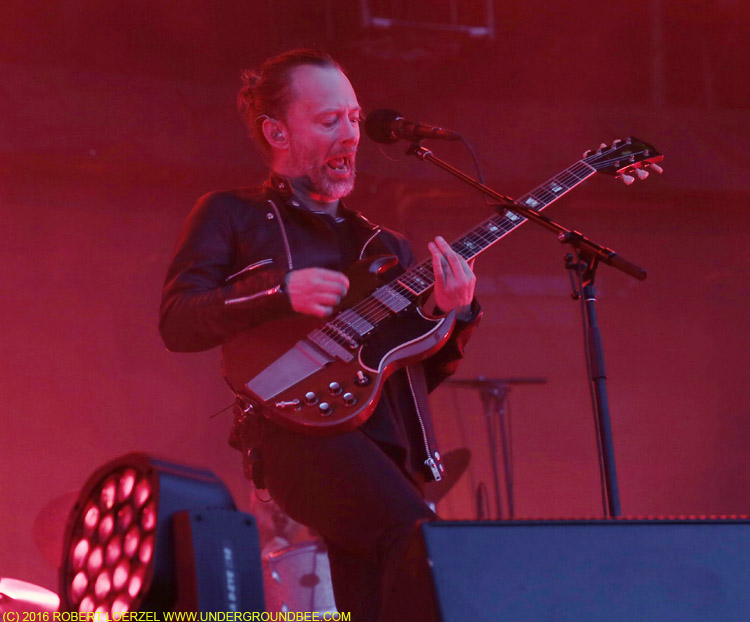 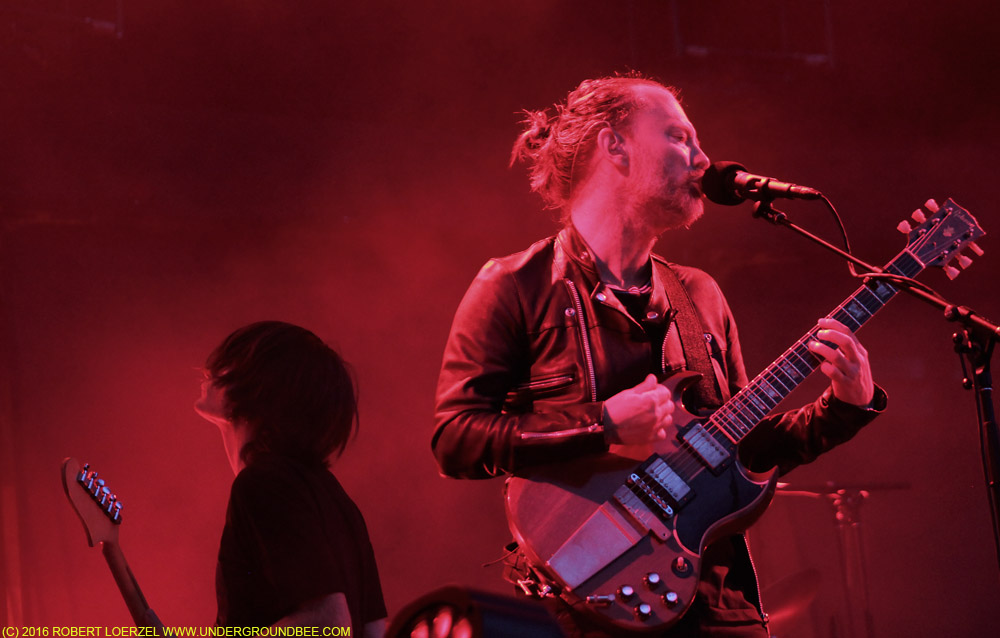 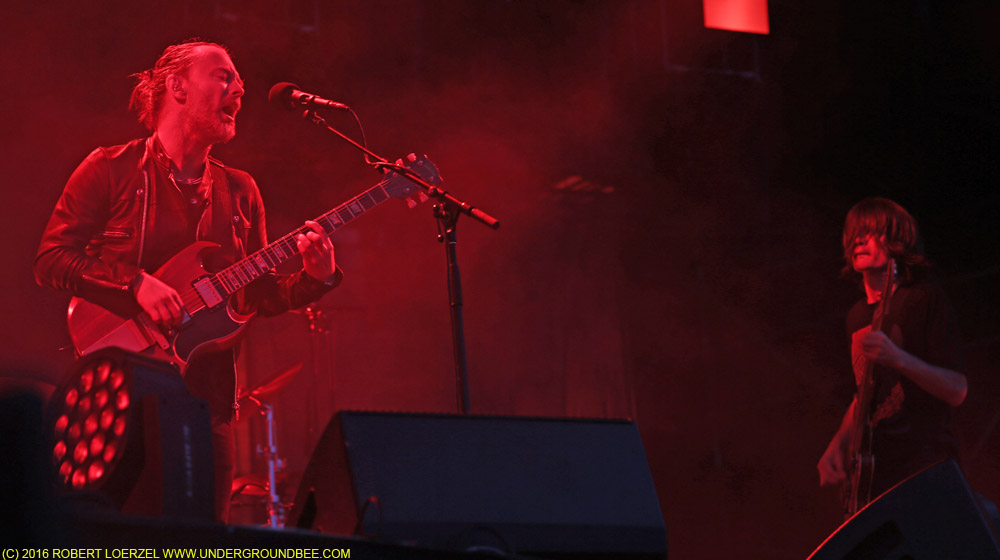 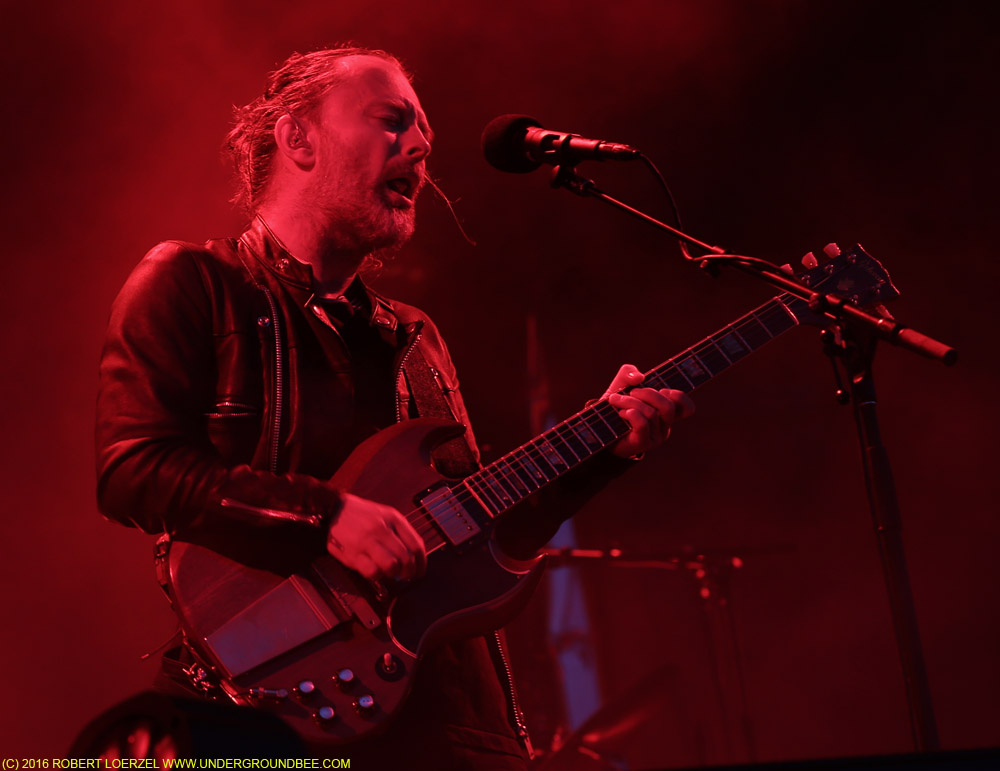 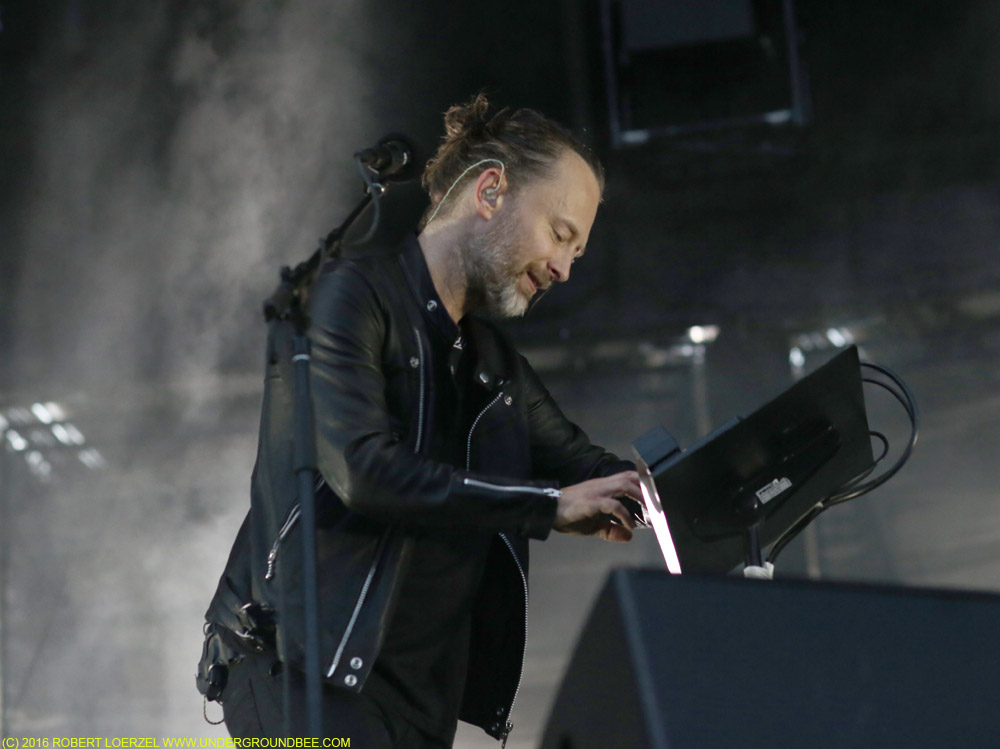 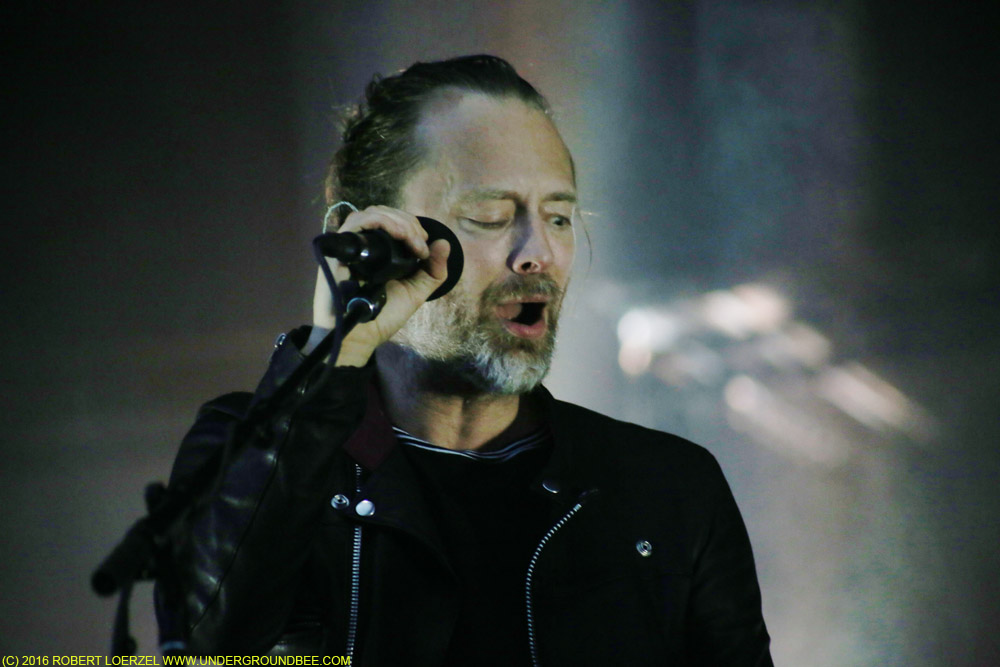 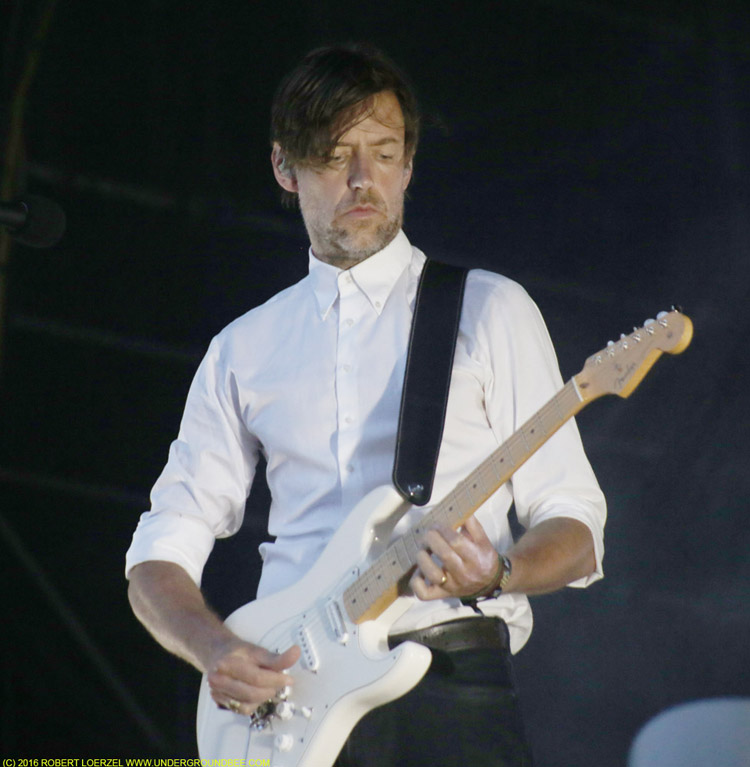 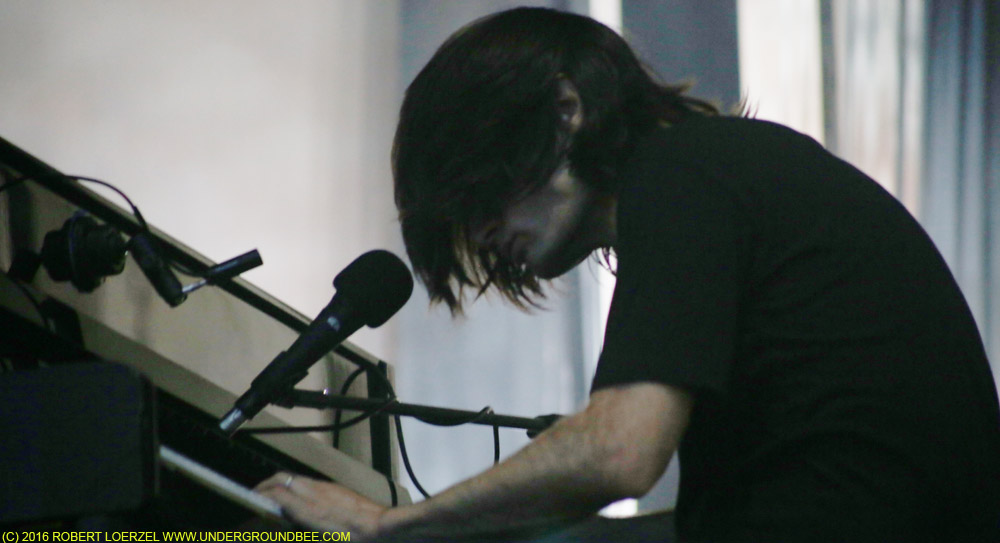 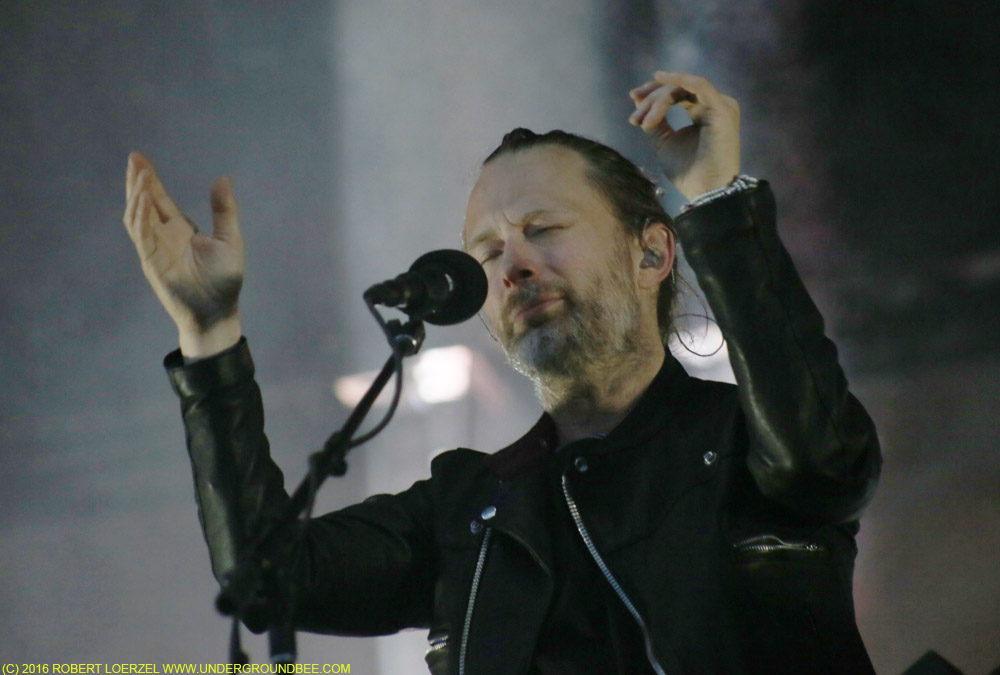 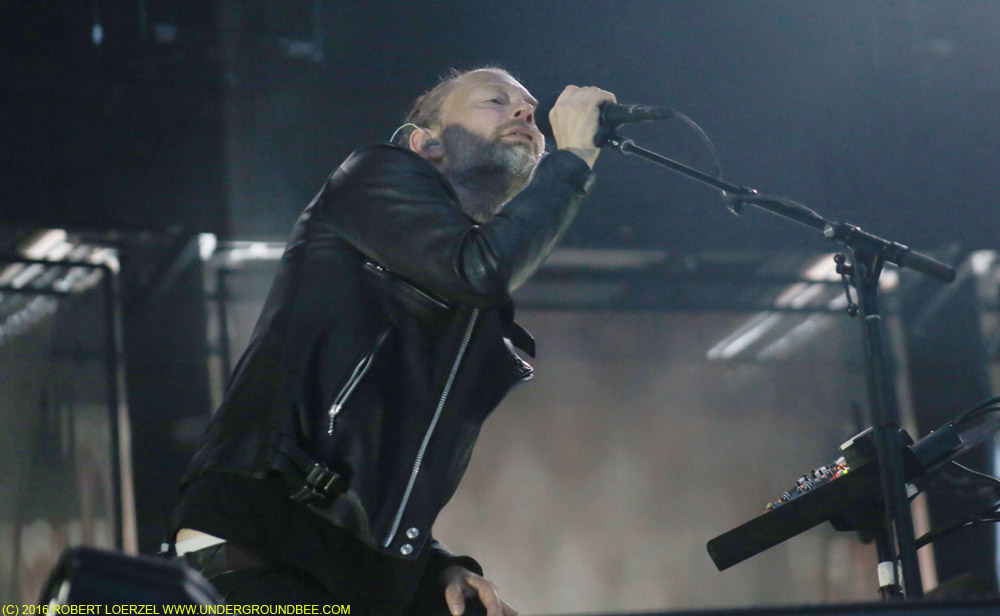 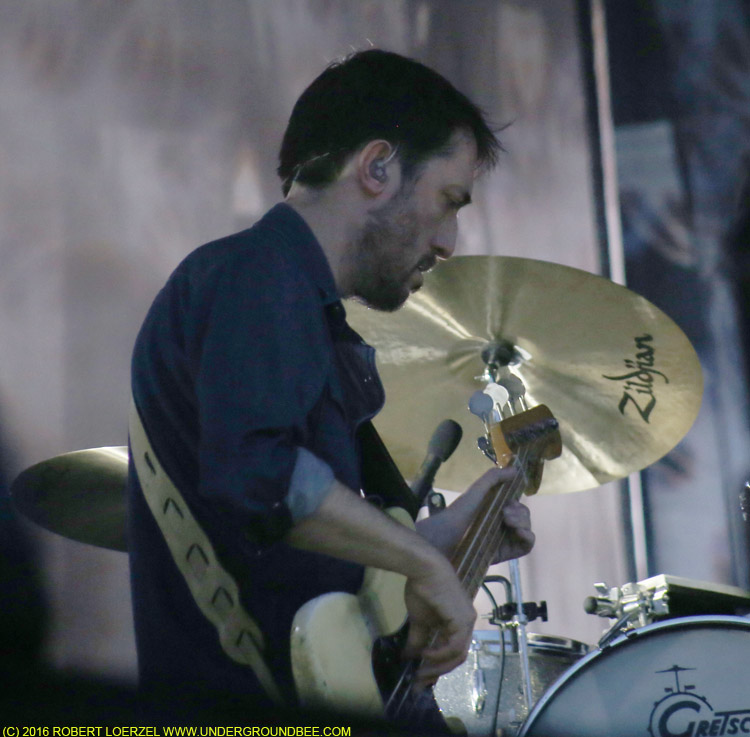 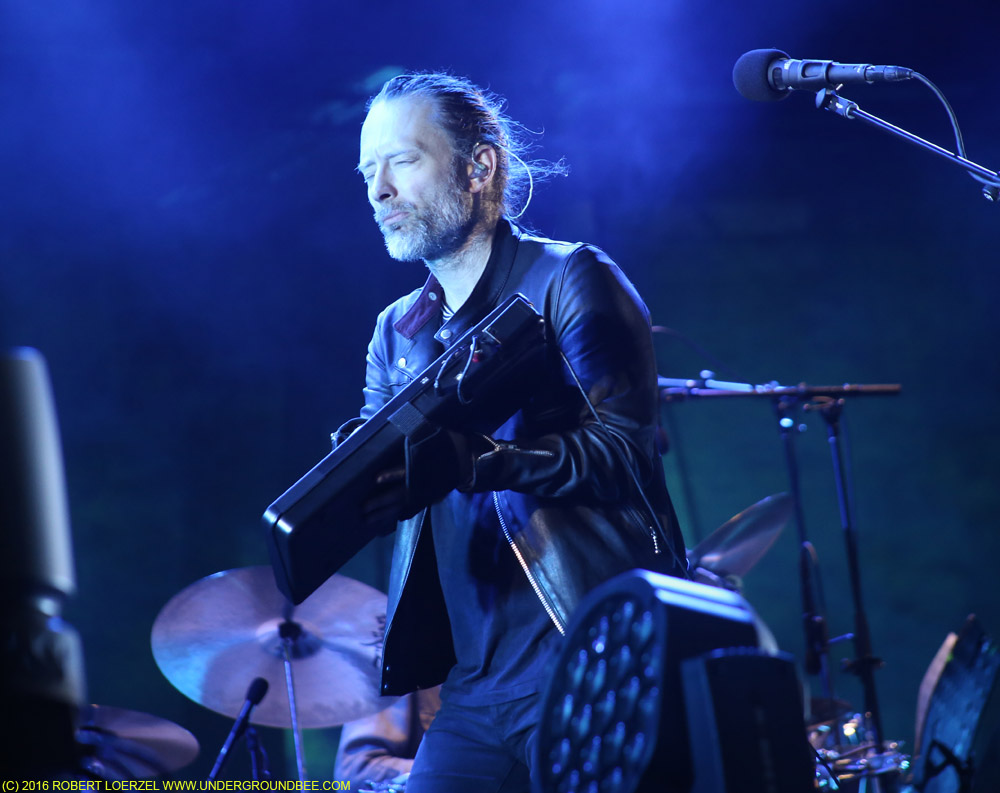 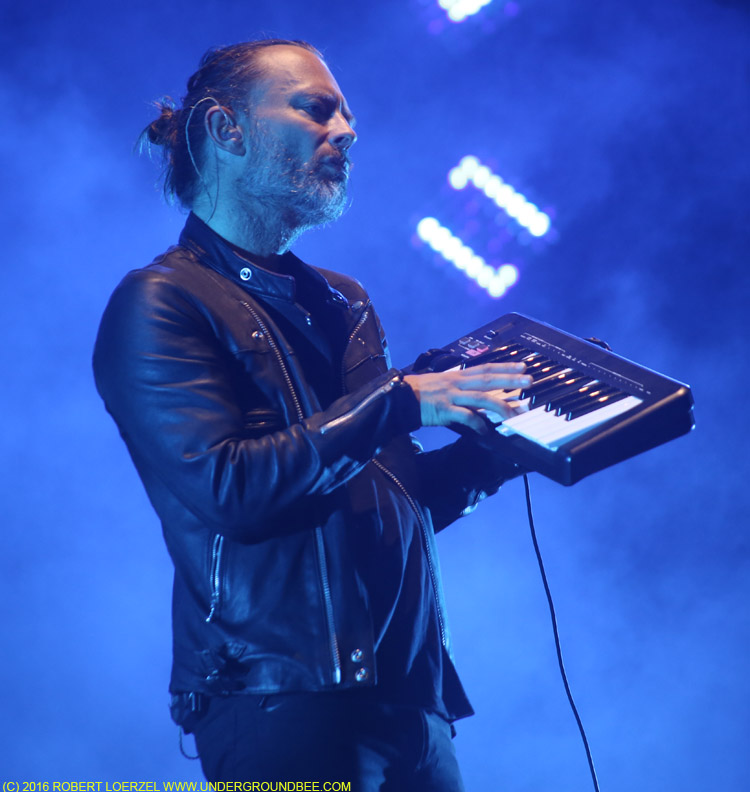 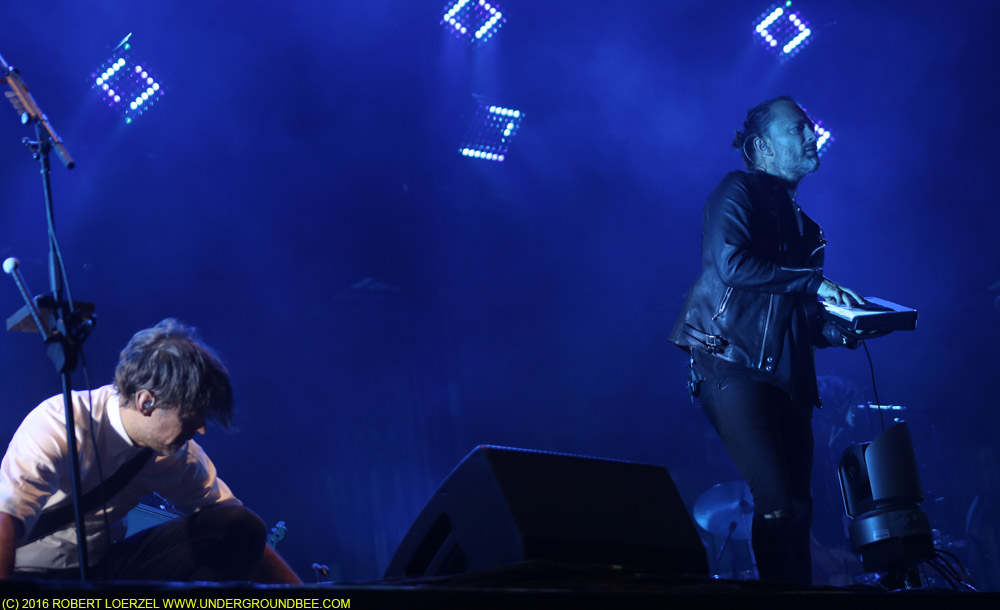 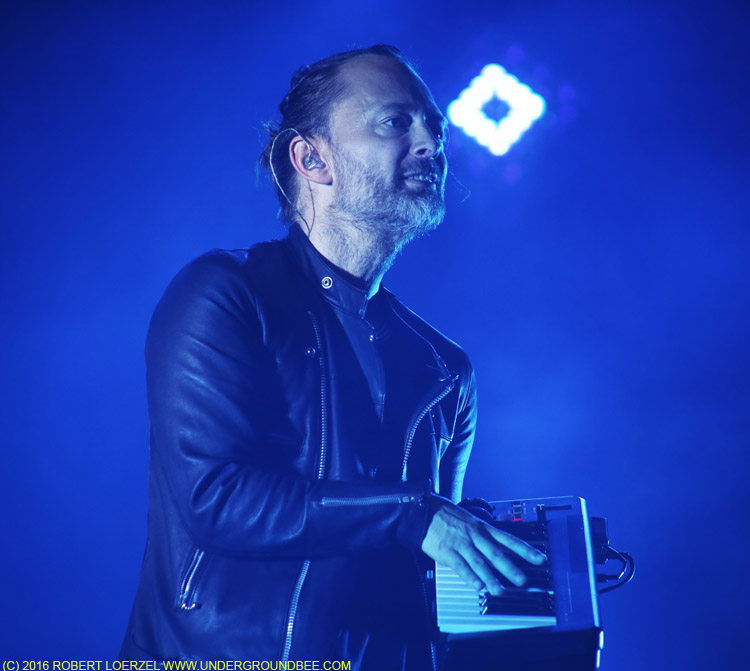 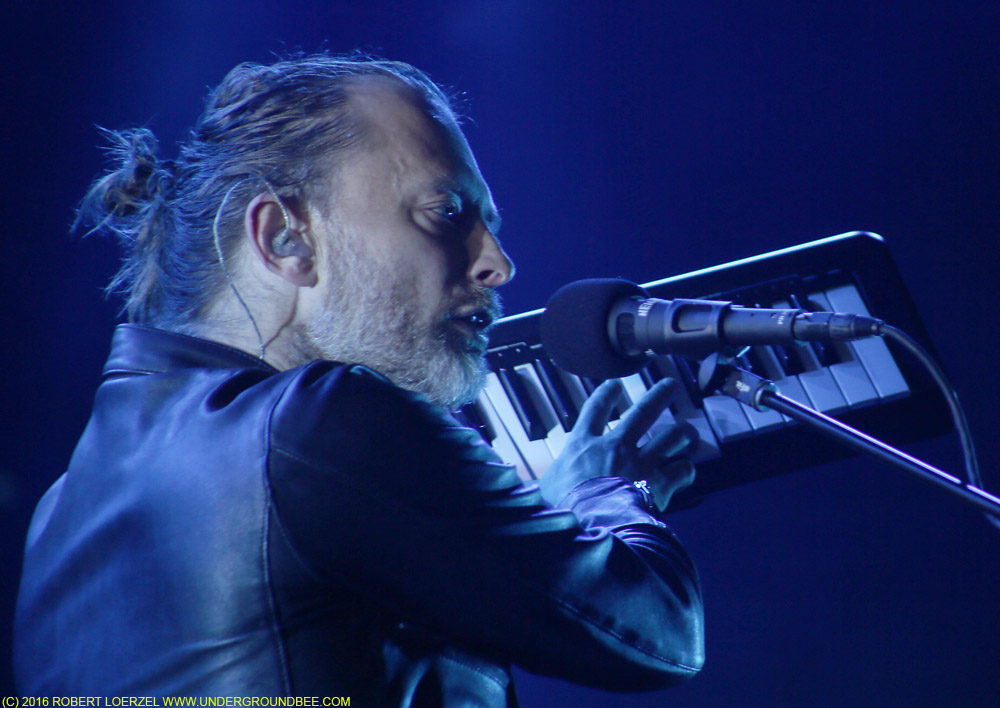 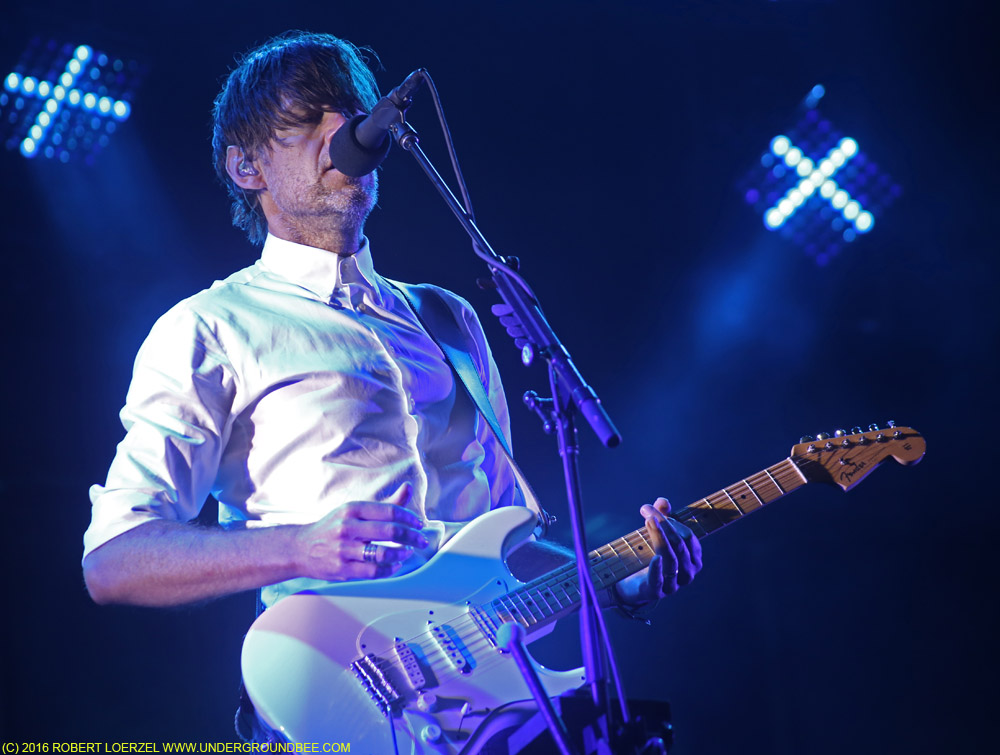 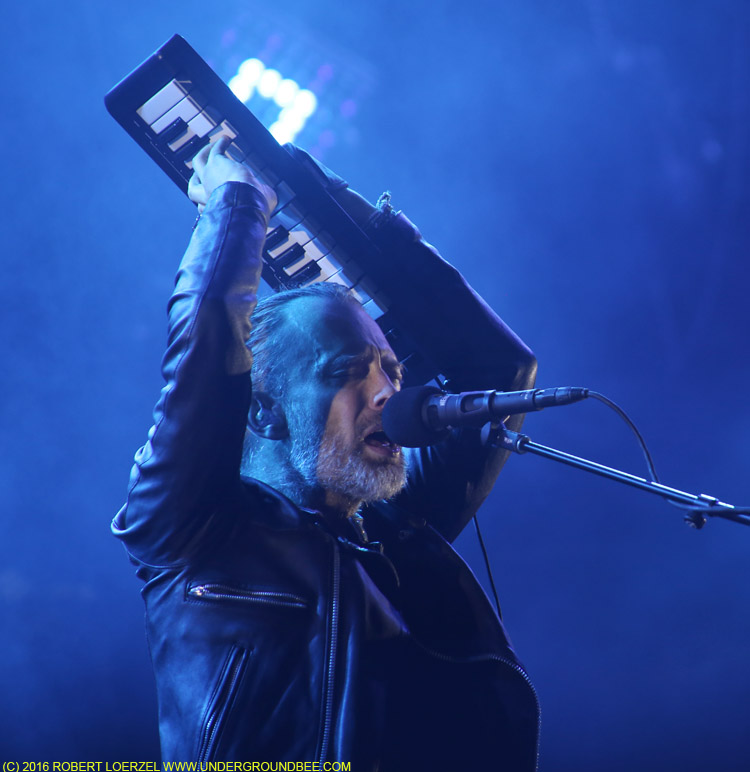 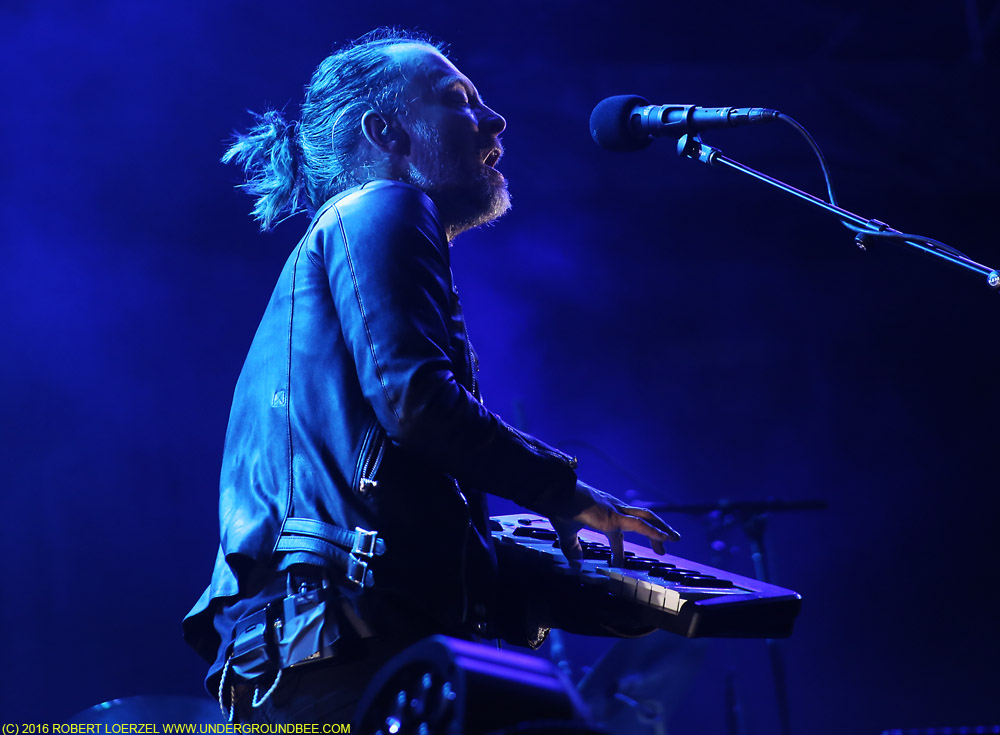 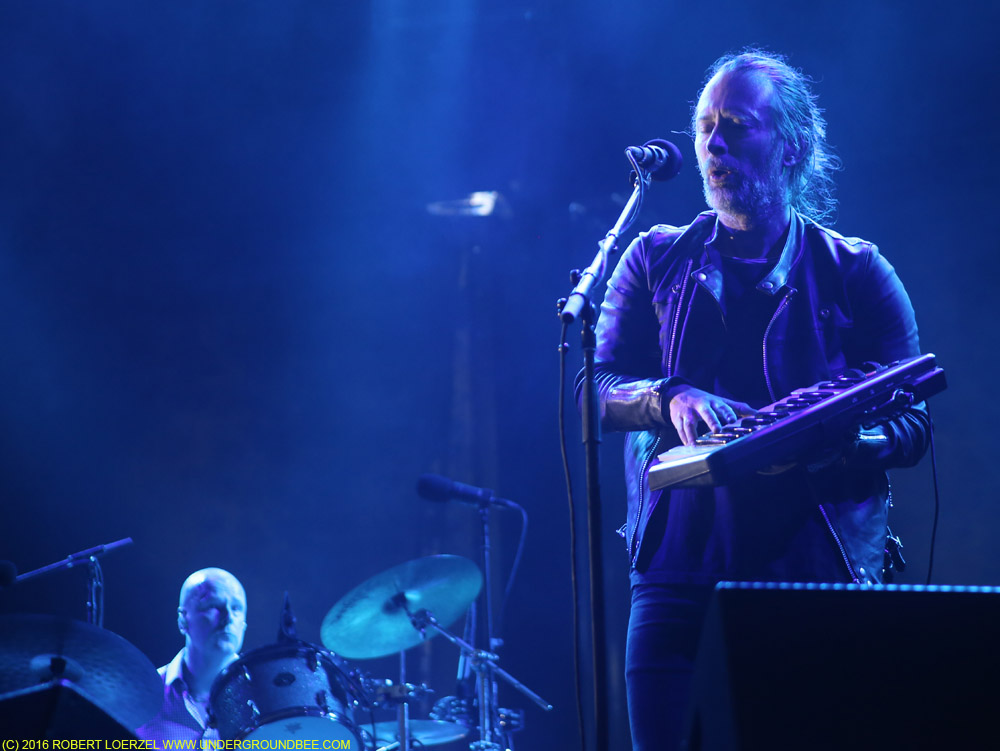 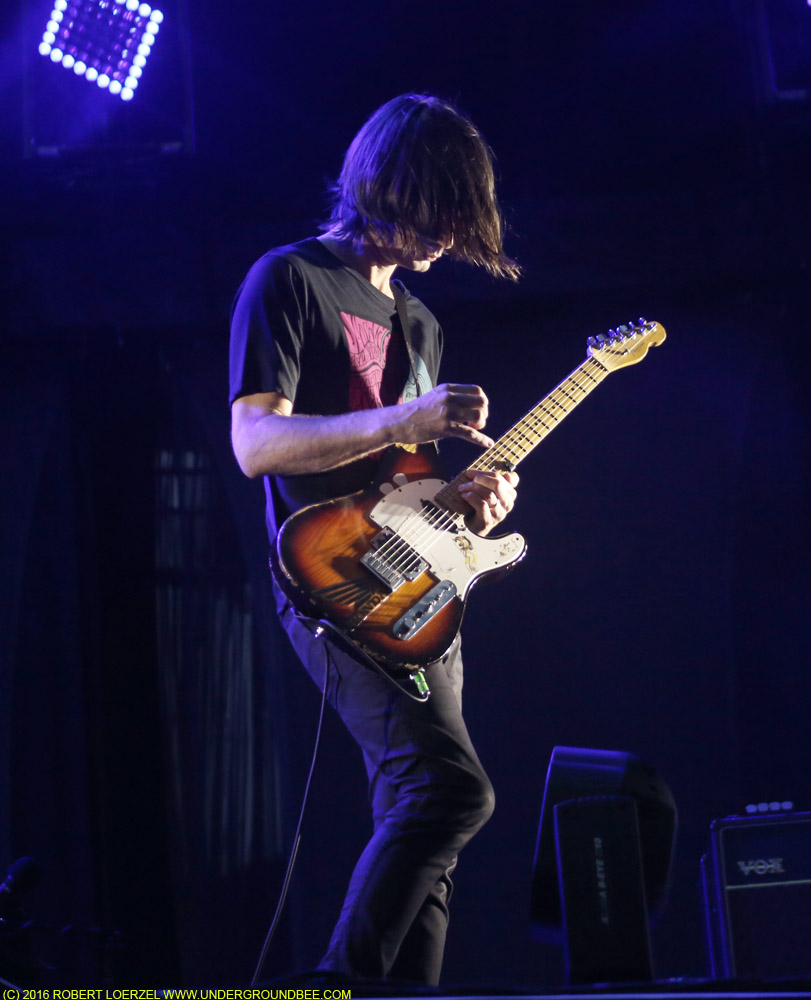 It’s hard to figure out exactly what Radiohead is up to these days: Working on a new album? Giving up on the idea of albums altogether? Just doing whatever they bloody well feel like? And what about the most famous member of the band, Thom Yorke? He’s touring now to do what — support a solo record he released four years ago? Or maybe he just felt like getting out onto the road again and playing with a different cast of musicians than usual.

Whatever his motivation, it was fabulous to see Yorke performing live again — and to hear the tunes from his somewhat overlooked solo CD The Eraser transformed into lively, spastic electronic rock by the side-project band Yorke is calling Atoms for Peace.

Atoms for Peace just played two shows at Chicago’s Aragon Ballroom. I caught the second night’s performance, on Sunday (April 11). And sorry, I have no photos to post here. Didn’t get a photo pass for this one.

The entire first part of the concert, all the way up until the encore, was a track-by-track performance of The Eraser, beginning with Yorke sitting down at a piano and playing the chords that open the record on the title track. As much as I love the record, it does have a dry sound, feeling very much like something created on a computer. In concert, the music came completely alive, thanks not only to Yorke’s terrific tenor and his twitchy dancing, but also the accompaniment from Radiohead producer Nigel Godrich, drummer Joey Waronker, percussionist Mauro Refosco and the second-biggest star on the stage, Red Hot Chili Peppers bassist Flea.

With his short hair dyed blue-green, Flea spazzed out as he thumped away on the bass, bringing out the funky side of Yorke’s compositions. Even if you aren’t a big fan of the Red Hot Chili Peppers (and I’m not), you have to admit this guy’s a talented, energetic bassist, and his presence made things even more interesting.

Yorke has danced around a fair amount in the last two Radiohead concerts I’ve seen, but never as much as he did on Sunday night. At moments, I had to laugh at how Yorke resembled the old SCTV character played by Martin Short, Ed Grimley, doing his odd little dance. All Yorke needed was Grimley’s triangle. (I see that the Chicago Tribune’s Greg Kot compared Yorke’s moves to those of Bez, from the Happy Mondays.) Wherever Yorke gets those strange moves, they’re fun to watch. He looks like someone who never took a dance lesson but who feels the rhythms of the music in every part of his body, moving around like he’s possessed.

The encore began with Yorke playing three songs all alone. The first is a new song apparently titled “Lotus Flower.” Introducing it, Yorke said, “This is one you don’t know. Or maybe you do. I’d be very impressed if you sing along, especially since I don’t know the words myself.”

He followed that with a piano performance of the Radiohead song “Like Spinning Plates,” and then he played a brilliant acoustic-guitar rendition of the classic song “Airbag,” from OK Computer. On record, the song has so many layers of instrumentation that you might wonder how well it would work with just an acoustic guitar and voice, but as Yorke showed in this performance, it’s a strong composition that sounds almost as good when it’s small as when it’s big.

After that, Yorke announced, “Back to the present!” Atoms for Peace returned to the stage, and the band played “Paperbag Writer,” “Judge. Jury. Executioner,” “Hollow Earth” and “Feeling Pulled Apart by Horses” — the last two being songs that Yorke released as a single last year. At the end of the night, I wondered what would be next for Yorke, Atoms for Peace and Radiohead. I imagine we’ll be seeing Yorke playing with Radiohead on some future tour. Will the Atoms for Peace experience change what Radiohead does? Who knows? In any case, it was very cool to see Yorke playing live again.

And here are some photos on flickr from the show by “Lost in Print.”

The Radiohead faithful thronged Chicago’s Auditorium Theatre on Monday night, June 19 — including those without tickets, who paraded up and down the crowded sidewalks with cardboard signs.

One fan wore a sandwich board with stenciled letters that reflected the paranoid bent of so many Radiohead lyrics: “THE GOVERNMENT DOESN’T WANT ME TO HAVE A TICKET.” Another fan made the more plausible claim: “WE DROVE 12 HOURS.”

Other fans had come from as far away as California.

Radiohead concerts are events. This British quintet is quite simply one of the world’s best and most exciting rock bands, and anytime Radiohead records new songs or tours, it’s big news in the world of rock music.

The Auditorium Theatre provided an elegant setting for Radiohead’s singular blend of art rock, great guitar riffs, electronica and emotional yet enigmatic vocals.  Following a strong opening set of hard blues rock by the Black Keys, the crowd erupted into thunderous, even ravenous applause as the auditorium fell dark and Radiohead entered.

What followed were 23 songs spanning Radiohead’s career — including nine songs that may end up on the group’s next album, likely to be released in 2007.

The question on every Radiohead fan’s mind: How are the new songs? Most of them seemed good, even very good, but not great. However, first impressions of Radiohead music can be deceiving, so one hesitates to make a definitive pronouncement.

A couple of the new songs actually sounded a little like soul music, a new trend for Radiohead. “15 Step” featured hand claps and a techno-dance beat, while  “House of Cards” was a quieter number with a mellow guitar rhythm and a falsetto by Thom Yorke that wasn’t far off from “Sittin’ on the Dock of the Bay.”

“House of Cards” was one of two new songs that were strong enough to give hope that Radiohead’s next album could be yet another classic. The other impressive new song, “4 Minute Warning,” featured an instantly catchy melody, with Yorke playing the electric piano amid an echo-laden arrangement.

Radiohead still knows how to fashion a straightforward rock song, and some of the new tunes did rock, including “Bangers ’n’ Mash,” which featured Yorke taking a drum solo; “Spooks,” a surprising instrumental with Dick Dale-style surf guitar; and “Open Pick,” which had all three of Radiohead’s guitarists going full-out on their axes.

“Videotape” had Yorke sitting at the piano, with an off-kilter drum pattern entering the song at an unexpected point, eventually making sense as the rest of the band kicked in. Other new songs – “Nude,” “Down is the New Up” and “Like Spinning Plates” – often turned into showcases for Yorke’s tenor, like miniature art-rock arias.

Radiohead is clearly a band in which every member’s contribution is important to the whole.

Bassist Colin Greenwood and drummer Phil Selway are an amazing rhythm section, bringing a strange life even to seemingly mechanical beats. Ed O’Brien plays not just great guitar riffs, but he also contributes Radiohead’s important backup vocals, which are often the hooks that make you want to sing along. And Johnny Greenwood is practically a one-man band, hopping between guitar solos, keyboard, theremin and drums, hiding his face beneath a mop of hair but never concealing his musical passion.

Yorke is, however, the band’s focal point, one of rock music’s most peculiarly appealing figures. His lyrics would make him appear to be an eccentric introverted poet, but on the stage, fed by the adoration and applause of his fans, Yorke becomes strangely extroverted.

During the most rhythmic songs, Yorke danced awkwardly like a marionette operated by a drunken puppetmaster. During “The National Anthem,” Yorke grasped the microphone for a few minutes before he actually began singing – as if in a trance, he squeezed his eyes shut and made hiccupping noises into the mike, before finally spitting out the words.

Early in the concert, as Yorke began strumming a B minor chord on his acoustic guitar, the audience instantly recognized “Exit Music (For a Film),” a classic track from the landmark “OK Computer.” A number of fans made “Wooo!” noises, followed by another contingent making “Shhhh!” sounds, all of which prompted Yorke to give a sly grin.

While the “OK Computer” songs drew some of the most enthusiastic applause all night, Radiohead’s later, more electronic music was also warmly received, showing that the band’s fans have followed it through musical changes, even when skeptics said the group was becoming too “difficult.”

The concert closed with one of those electronic songs that originally baffled some listeners, “Everything in Its Right Place,” prompting the crowd to clap along to the track’s insistent beat. That simple little tune, a Radiohead song reduced to bare bones, sounded magnificent.

As the band left the stage, its patterns continued to repeat through the amplifiers, a crescendo both noisy and beautiful.

Second encore:
“House of Cards”
“Everything in its Right Place”