This year’s Pitchfork Music Festival — which took place July 18-20 in the usual spot, Union Park — had its share of thrilling musical moments, as well as a lot of stuff that didn’t connect with me at all. And the weather was just about perfect.

When I participated in Newcity’s roundtable discussion previewing the festival, I confessed my bias, calling myself a rockist. I do like tons of music that goes way beyond the standard rock-band format, but it takes a lot for me to get excited about electronic music, hip-hop or anything resembling mainstream pop and R&B music. And for my own personal tastes, Pitchfork had too many sets starring guys standing behind laptops and acts lacking any actual live musicians.

Over the course of the weekend, I took photos of nearly every artist that played — I missed five of the 43 acts — and those pictures in various posts here on my blog. Here’s where you can find everything:

I also filed several reviews of performances from the weekend for Newcity, which I’ve compiled below. In addition to the sets that I reviewed, other highlights for me included St. Vincent’s amazing, blazing set on Saturday and Neneh Cherry’s sultry, haunting performance on Friday — only her second U.S. concert ever, and the first one she’s done since 1992! Moments like those made the weekend more than worthwhile.

Out of the artists I was less familiar with, I was impressed by Ka’s passionate hip-hop and the strange sounds of Factory Floor. And that set by Diiv was sounding great, but I left after a couple of songs so I could photograph and witness the punk spectacle known as Perfect Pussy. (Dang schedule conflicts!)

As she sang her songs of yearning, Sharon Van Etten paused to mention the fact that she’d played once before at Pitchfork. That was four years ago, and she was barely known at the time, playing an acoustic set all by herself early in the day. She sounded a little tentative and fragile back then. This time, as she introduced one of her old songs, “Save Yourself,” she reminisced: “I tried to play this song solo and it was hard to do. And now I can’t imagine doing it without these guys.” Indeed, her dynamic band seemed essential to her sound this time, turning what might have been pensive folk songs into sprawling, multicolored rock—and she sounded all the more confident in this musical setting. Van Etten sounded fierce in “Serpents,” driven by the song’s hypnotic bass and drum lines. She closed with “Every Time the Sun Comes Up,” the song that also ends her new record “Are We There,” and the passion of the tune’s mantra-like chorus felt palpable on this sunny summer afternoon. See more photos of Sharon Van Etten.

Beck seemed to take a message from the words flashing on the Pitchfork Fest’s video screens as the previous act, Giorgio Moroder, finished his set: “HOT STUFF.” Beck and his backing musicians practically bounded onto the stage, immediately allaying any fears that this was going to be a morose and mellow set. Even though Beck’s latest album “Morning Phase” is filled with the sad bastard variety of Beck music, he apparently decided not to start off his show by moaning about isolation. Instead, he delivered something more like a greatest-hits set, starting off with “Devil’s Haircut” and gleefully tossing in “Loser” halfway through the show. By the time he finally got around to playing some of those new downbeat numbers, he’d earned the right to moan a little bit—and he sounded almost majestic doing it. And then it was back to more of the hot stuff. See more photos of Beck.

Cadien Lake James, singer-guitarist with the young Chicago garage rock band Twin Peaks, wasn’t joking last week when he tweeted: “Does anyone have a wheelchair I can adopt for pitchfork? Holla atcha boy.” Playing the first set of Pitchfork’s second day under glaring sunlight on the Green Stage, James rolled out onto the stage in a wheelchair, with one of his legs in a cast. But his apparent injury didn’t hamper Twin Peaks from rocking with its usual rambunctious energy. James’ bandmates hopped around, layering riffs on top of riffs as they played a couple of songs from their debut EP, “Sunken,” and a bunch from their forthcoming LP, “Wild Onion.” The fans gathered in front of the barricade, shook their arms in the air, ready to mosh despite the early hour. See more photos of Twin Peaks.

The delicate, meditative songs Mark Kozelek records with his band Sun Kil Moon are the sort of music that can get lost in the air at an outdoor festival. Up close to the Green Stage, it felt like an intimate show, with Kozelek’s silky nylon-string guitar notes accenting his unusually personal lyrical musings about things like watching Steve McQueen movies with his dad. The rest of the band tinkered around the edges of Kozelek’s quiet plucking, creating an effect something like a chamber quartet playing jazzy folk-rock. As exquisite as that sounded, the crowd was chatty just a short distance farther away from the stage. It was the sort of festival set that seemed either beautiful or boring, depending on where you happened to be in the park. See more photos of Sun Kil Moon.

The Blue Stage’s first set of the day, a shambling psychedelic show by Circulatory System, seemed like a warm-up for the headlining performance by Neutral Milk Hotel that would come later. Both bands are connected with the Elephant 6 scene, though Circulatory System is considerably more obscure. Will Cullen Hart, who has also played with the Elephant 6 band Olivia Tremor Control, stood behind a pair of drums, occasionally pounding with mallets or banging a tambourine as he sang in the sort of high, wispy voice that’s a regular feature in this sort of Day-Glo music. The other musicians played instruments including cello, violin, clarinet and xylophone, giving it all the feel of a junk-shop orchestra, but the clattering of all the percussion had a tendency to drown out the nuances. Neutral Milk Hotel’s Jeff Mangum sings on Circulatory System’s latest record, but anyone who thought he might make a guest appearance during this early-afternoon set was suffering under a delusion of wishful thinking.

Before Neutral Milk Hotel took the stage for the final concert of Saturday night at Pitchfork, an announcement came over the speakers: at the request of the artist, no taking of photographs and video would be allowed. And the video screens that normally show the performers on Pitchfork’s stages went dark. Jeff Mangum, the famously reclusive and mysterious leader of this band, was visible on the stage, but even at close quarters, he seemed to be in disguise, hiding his face with a hat and a bushy beard. Mangum managed to maintain his enigmatic aura even as he was standing in front of twenty-thousand people. In the first minutes of the show, hundreds of people rushed forward for spots closer to the stage, shouting the words of songs from “In the Aeroplane Over the Sea,” an album whose devoted admirers multiplied many times over in the fifteen years Mangum and Neutral Milk Hotel went silent. People even moshed, not something you see every day at a folk-rock concert. Mangum has a strong, braying voice, which almost seems to command others to sing along. Unfortunately, the mix accented the harsh tones of his vocals and made his acoustic guitar sound like it was cranked up way past eleven. Coming and going from the stage, Mangum’s bandmates added all the horns, accordions and drums that made Neutral Milk Hotel’s records sound like surreal Salvation Army recitals. And when audience members lifted their voices in chorus with Mangum’s, Union Park became a giant hipster revival tent.

Speedy Ortiz kicked off Sunday’s Blue Stage schedule with a burst of scrappy garage rock chords. As Sadie Dupuis sang the verses in an almost understated manner, the songs occasionally loped into off-kilter rhythms, bringing to mind the early music of Liz Phair. The three guys in this band kept the music charging forward, but the focus was all on Dupuis, whose voice rose to pleading peaks in the refrains of her songs. Whenever the time came for an instrumental break, she seemed to revel in stepping back from the mic and whipping her hand across her guitar strings. See more photos of Speedy Ortiz. 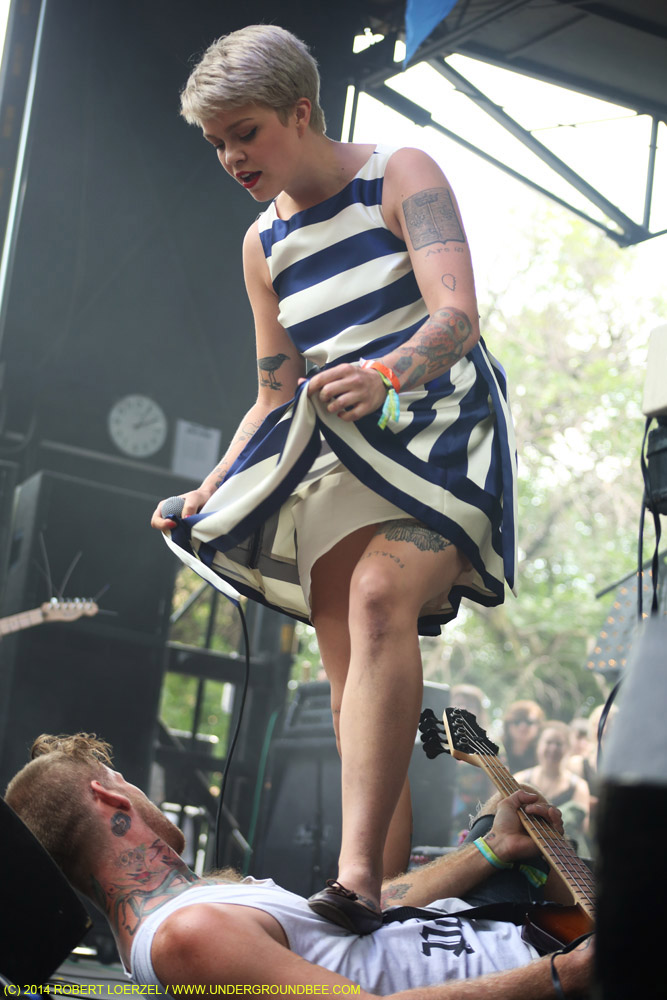 Perfect Pussy’s songs were barely discernible amid the nonstop noise and crashing as the band quickly blasted through its set on the Blue Stage, but that hardly seemed to matter. This punk band is all about bashing your head in, sonically speaking, and it accomplished that. Lead singer Meredith Graves, wearing a striped dress, rarely stopped moving as she screeched and twirled, occasionally lifting her skirt for peeks at her undergarments, while her bandmates attacked their instruments as if they wanted to break them. Not surprisingly, a few people in the audience were inspired to crowd-surf. See more photos of Perfect Pussy.

Real Estate’s breezy music, full of shimmering surfaces with chiming guitars and soft, breathy vocals, isn’t the sort of stuff that gets audience fists pumping in the air, but the New Jersey band’s pleasant set late Sunday afternoon offered a welcome interlude of relaxation. The light, airy songs drifted out across the park, and every once in a while, Real Estate picked up the tempo, sounding a bit like a venerable band from the same state, The Feelies. But mostly, the group put us in a mellow mood. See more photos of Real Estate.

For fans of the hazy 1990s British rock that came to be known as shoegaze, Slowdive was one of Pitchfork’s true must-see acts this year. Back together after a nineteen-year hiatus, the group sculpted pretty melodies out of its guitar notes during its set early Sunday evening, with Neil Halstead and Rachel Goswell switching off on lead vocals, both sounding like they were lost in dreams. But then, as the chords churned around and around, the songs began to roar with an often fierce intensity—contrasting with the musicians’ calm, relaxed demeanor onstage. It’s hard to say whether any of them actually gazed at their shoes as they made that beautiful, blurry and buzzing noise, but it was beguiling. See more photos of Slowdive.

My photos of Slowdive’s great performance on Sunday, July 20, in Union Park during the third day of the 2014 Pitchfork Music Festival. (My review is on the Newcity website.) 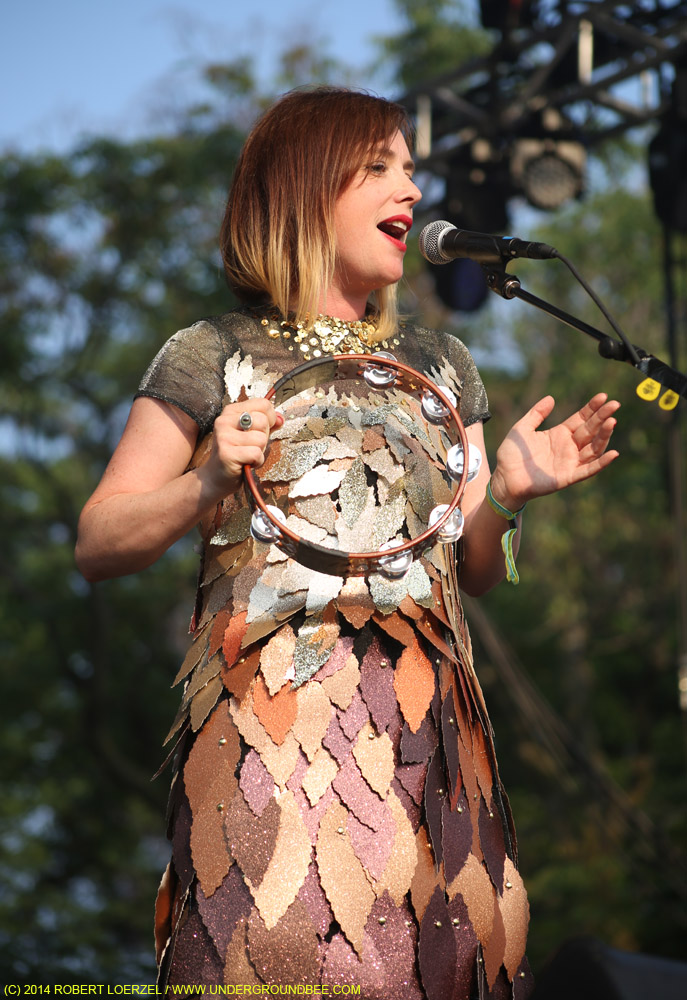 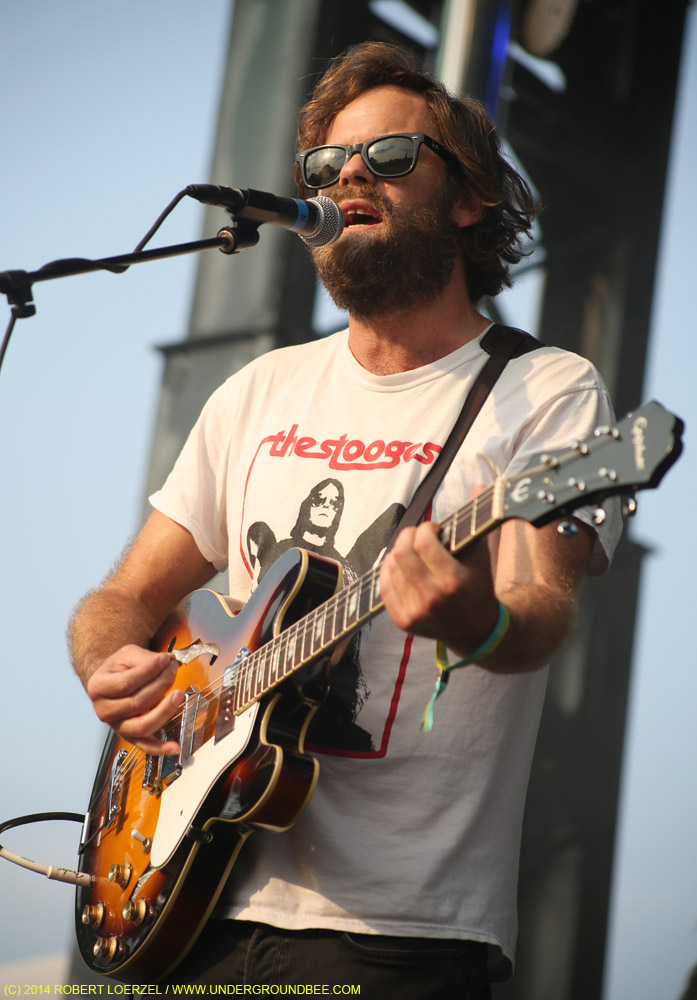 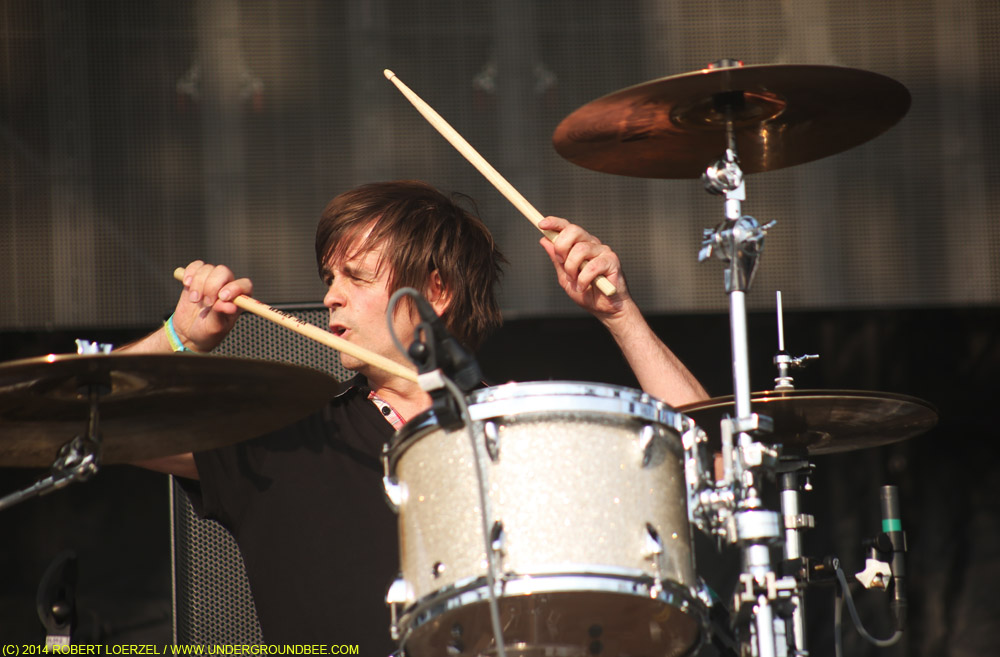 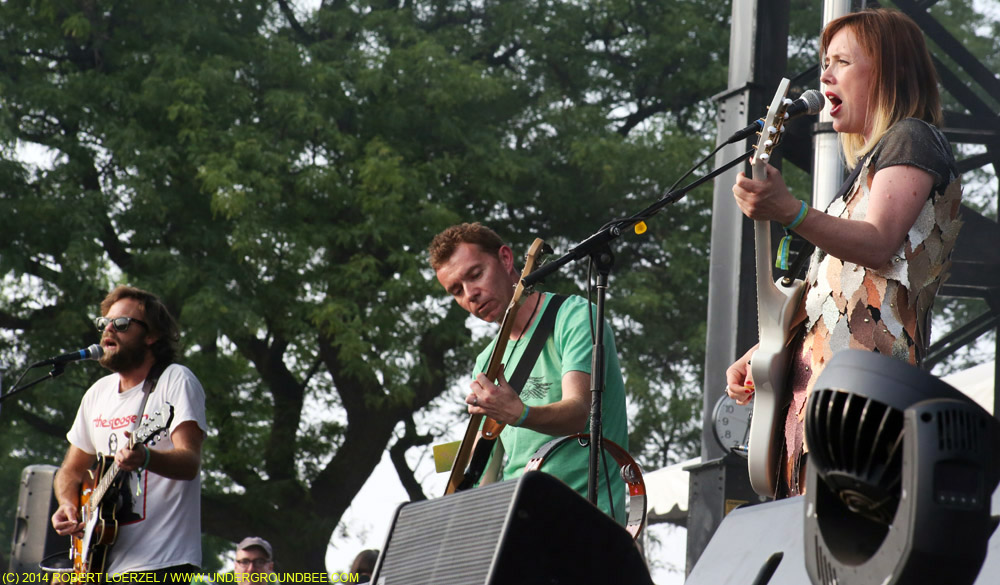 Read my recap of the 2014 Pitchfork Music Festival.