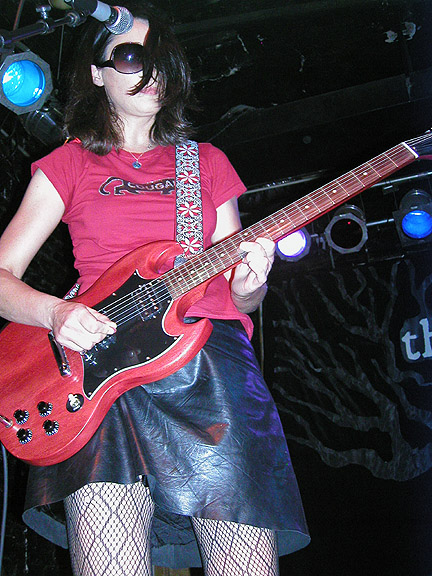 For my money, the Moaners — Melissa Swingle and Laura King — have topped the White Stripes this year in the realm of guitar-and-drums duos, though the Stripes’ disc Get Behind Me Satan is getting a lot more attention than the Moaners’ fine debut record Dark Snack.

Unfortunately, attendance was sparse at tonight’s show. The Abbey Pub wasn’t nearly as crowded as Subterranean had been the last time the Moaners were in town. Ah, I suppose it was an off night, coming on a Thursday without much advertising or publicity. But the small crowd didn’t make the music any less exciting.

King showed herself to be an exceptional drummer, making a powerful sound with a relatively small kit, and Swingle’s sleepy vocals and slide-heavy electric guitar playing were just as twisted as ever.

Some new songs in the encore  — a couple of them half-finished  — sounded promising. Can’t wait for that next Moaners album. Check them out July 11 at theHideout.

Out of the three opening acts tonight, the only one worth noting was Mr. Rudy Day, a band led by Chicago alt-country scene fixture Andy Hopkins, playing music that sounded like it was straight out of ’70s classic rock. He’s a good lead guitarist, and not a bad singer, either.

SEE MORE PHOTOS OF THE MOANERS.