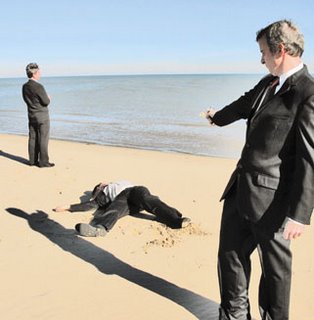 1. THE STRANGERER – Mickle Maher’s play – which combines a 2004 debate between George W. Bush and John Kerry with Albert Camus’ The Stranger – sounds a little bit like a stunt, but it was deeply profound, funny and often disturbing. Of all the plays I saw in 2007, this is the one that lives on in my dreams. Theater Oobleck is bringing back The Strangerer in April. Don’t miss it.

2. AUGUST: OSAGE COUNTY – Tracy Letts’ play at Steppenwolf (now on Broadway) won lots of critical praise, and it deserved it. What an epic of domestic dysfunction and black comedy. Great script, even better cast.

3. I SAILED WITH MAGELLAN – Stuart Dybek’s wonderful collection of connected short stories seemed like an unlikely book to adapt for the stage, but playwright Claudia Allen really got it right with this enchanting show at Victory Gardens.

4. THE ADDING MACHINE – This world premiere at Next Theatre (Joshua Schmidt and Jason Loewith’s new musical version of Elmer Rice’s 1923 expressionist drama) was surreal and nightmarish, not your typical musical-theater fare. A superb work of art.

5. DEFIANCE – John Patrick Shanley’s military drama at Next Theatre was so good because it’s such a tight, compact play, exploring ethical issues without ever getting didactic.

6. THE SAVANNAH DISPUTATION – The Writers’ Theatre production of Evan Smith’s new script was the best play of the year on the topic of religion, a topic that popped up a lot on stages in 2007.

7. HUNCHBACK – I missed this show when Redmoon first staged it in 2000, so I can’t say how the new production compared with the original, but it was a marvelously inventive and self-reflexive show.

8. THE TURN OF THE SCREW – Like a magic show, this Henry James adaptation at Writers’ Theatre toyed with our senses and raised more than a few goose bumps.

9. THE INTELLIGENT DESIGN OF JENNY CHOW — Wacky fun with some emotional depth, Rolin Jones’ play was an unexpected hit for Collaboraction, and it deserved all its success.

10. OTHELLO – An excellent and intimate version of the Shakespeare classic, directed by Michael Halberstam at Writers’ Theatre, with a fabulous turn by John Judd as Iago.