1. THERE WILL BE BLOOD (Paul Thomas Anderson) – I waited until this movie opened in Chicago Jan. 4 before I finished my 2007 list, and I’m glad I did. (Arguably, if you go by Chicago release dates, this one should be saved for the 2008 list, but I’m sticking it under 2007 since it qualifies for the Oscars.) As historical epics go, this film is remarkably spare and focused. It could have been one of those sweeping sagas – how the oil industry changed the country – but instead it’s chamber drama about one greedy, self-centered and driven man. Daniel-Day Lewis’ performance is simply amazing (as so many of his performances have been). Much of the time, his character is putting on a show for the people around him, and the film makes wonderful use of this oil man’s speeches, finding a peculiar kind of poetry in these sales pitches. Lewis does allow us some glimpses behind his mask, but he never reveals that much about why he became the way he is. Too much of that sort of psychoanalysis might have lessened this film. It’s quite a while before the first line of dialogue is spoken, and those opening scenes are a masterful example of what is essentially silent cinema. I’ve liked all of Anderson’s previous films to one extent or another (I need to see them again to arrive at a more thoughtful analysis), but this is his strongest work yet. It bears little resemblance to Anderson’s earlier movies until the final scenes fall into a slow, building intensity that reminded me of the unusual pacing in Punch Drunk Love. The new film is more than a little reminiscent of Erich Von Streheim’s classic Greed, and the sharp orchestral score by Johnny Greenwood of Radiohead kept putting me in the mind of Stanley Kubrick – a feeling that was reinforced by the devastating final shot. 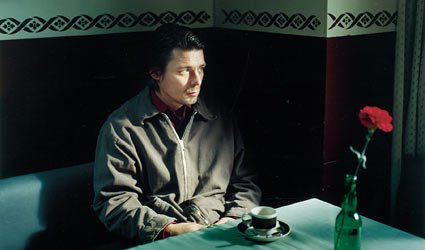 2. LIGHTS IN THE DUSK (Aki Kaurismaki) – This film barely received any distribution or critical notice, but I found it to be one of the best yet from one of my favorite directors, Finland’s Aki Kaurismaki, a master of minimalism. Kaurismaki tells this sad little story with brilliant cinematography, smart editing and a wicked sense of black humor. It’s another new film that reminds me of the great silent films – in this case, the work of Charlie Chaplin. (See my earlier review of Lights in the Dusk.)

3. BRAND UPON THE BRAIN! (Guy Maddin) – Winnipeg’s Maddin continues to be one of the weirdest filmmakers in the world with his latest fever dream, which came to Chicago this year with a full orchestra, sound-effects crew and narration by Crispin Glover. I also saw the film without the spectacle, in a print featuring narration by Isabella Rosselini. It works in either version, though like all of Maddin’s films, this one will baffle a lot of people. The rapid editing style succeeds in simulating the way memories and visions flick in and out of the brain (in an interview, Maddin told me this was his intention). Strangely enough, the movie shares some common elements with The Orphanage, though their cinematic styles are completely different. Both films are about characters returning to haunted orphanages where they grew up, with a mystical lighthouse located nearby. Brand Upon the Brain! comes much closer to presenting the cinematic equivalent of dementia.

4. SILENT LIGHT (Carlos Reydagas) – Set in a Mennonite community in Mexico (where a German dialect is spoken rather than Spanish), this film is breathtakingly beautiful and heart-rending. The plot takes an odd, seemingly mystical turn that I’m still grappling with. Silent Light played at the Chicago International Film Festival.

5. ZODIAC (David Fincher) – With his earlier film Seven, Fincher was part of the somewhat sickening movement I call serial-killer chic. I liked that film and some of the other movies about serial killers, including Silence of the Lambs, but after a while it started to feel like the genre was fetishizing some aspects of these disturbing murderers. Fincher subverted the genre with Zodiac, which might have seemed anti-climatic for people expecting another Seven. It does something that few films based on real crime stories have ever done: Rather than boiling down a complicate true story to a few stock elements, it shows the story of the Zodiac Killer as an unknowable mystery that obsesses various people, especially a newspaper cartoonist, over a long stretch of time. Zodiac feels real and authentic, and in spite of the lack of a dramatic conclusion, it also manages to be quite absorbing.

6. NO COUNTRY FOR OLD MEN (Joel and Ethan Coen) – I haven’t read Cormac McCarthy’s novel (yet), so I can’t say how it compares, but this is a terrific thriller with a creepy, almost nihilistic attitude. The ending threw some people, but I found it fitting.

7. THE DARJEELING LIMITED (Wes Anderson) – Anderson’s quirkiness makes him an easy target for some critics, but I thought he was in top form this time. The panning camera shots, editing and colorful shots of India are fabulous filmmaking, and the characters are pretty compelling beneath all those quirks. Anderson’s movies are a bit like kabuki, and you have to accept that the surface won’t seem completely real. Darjeeling teeters between being a spiritual journey and a satire making fun of spiritual journeys, but that teetering makes for an entertaining and eloquent film.

8. ONCE (John Carney) – Simplicity is one of this film’s winning qualities. It often feels like a documentary, and Carney wisely lets some of the musical scenes unfold in real time. Few other movies have so vividly captured that connection people find by making music together.

9. 4 MONTHS, 3 WEEKS, 2 DAYS (Christian Munigu) – Another film that seems real enough to be a documentary. This Romanian movie about a woman arranging an abortion for a friend is not easy viewing, but it is compelling and moving. Its realism reminded me of the earlier Romanian film The Death of Mr. Lazarescu as well as the films of Belgium’s Dardennes Brothers. It showed at the Chicago International Film Festival.

10. THE DIVING BELL AND THE BUTTERFLY (Julian Schnabel) – The opening scenes – shot from the point of view of a paralyzed man waking up in a hospital – are marvelous filmmaking using handheld camera, blurry and shallow-focus shots. It’s the sort of movie that might come off as experimental except for the fact that Schnabel keeps the narrative clear. After that opening, the movie broadens out to include shots from other perspectives, but it always feels like a uniquely cinematic experience. And without resorting to cheap inspirational fare, the story makes you think about what it means to be alive.

SPECIAL ASTERISK LISTING – There’s one 2006 movie that did not come to Chicago until 2007, and would place high on this list if I counted it as a 2007 film:
THE LIVES OF OTHERS (Florian Henckel von Donnersmarck)

MY NEXT TEN
11. Two Days in Paris (Julie Delpy)
12. The Savages (Tamara Jenkins)
13. Abel Raises Cain (Jenny Abel and Jeff Hockett)
14. Michael Clayton (Tony Gilroy)
15. No End in Sight (Charles Ferguson)
16. King of Kong: A Fistful of Quarters (Seth Gordon)
17. All the Invisible Things (Jakob W. Erwa)
18. Away From Her (Sarah Polley)
19. The Wind That Shakes the Barley (Ken Loach)
20. Margot at the Wedding (Noah Baumbach)