DAY THREE, Aug. 3: I didn’t plan things this way deliberately, but my schedule today at Lollapalooza is dominated by various kinds of electronic and hip-hop (or hip-hop-influenced music). First off, there’s Chicago R&B/hip-hop singer Kid Sister, who puts on an entertaining set around noon on the AT&T stage. She seems surprised to be featured in such a big venue. “Main stage – what the hell?” she says… as always, flashing a huge smile. Kid Sister has one of those infectiously joyful looks, and I can picture her becoming a big star. PICTURES OF KID SISTER.

Next, I catch a little bit of What Made Milwaukee Famous. Despite the name, they’re from Austin. (Are any recent bands actually from the places they mention in their band names?) Dumb name, if you ask me. The music sounds OK, but I impatiently move on… to see the Whigs.

Now, this band is old news as far as I’m concerned. I’ve seen them twice this year already. But what the heck… why not see them again? They always hammer out their tunes with a lot of intensity, and the songs are smarter than you might think on first listen. This trio from Athens, Ga., is definitely worth watching. PICTURES OF THE WHIGS.

I haven’t heard the new record by Brazilian Girls yet (it just came out today), but their first two albums are a nice brand of electronic pop music: a little bit dance, a little cabaret, some tropicalia… Classy stuff and sexy, too. The sexy part’s especially obvious when you see lead singer Sabina Sciubba in concert. Not only is she a knockout, she’s also a fashion adventurer, always appearing in a new outfit unlike anything else you’ve ever seen. And she knows how to flirt and toy with her audience like few other singers these days. She’s been one of my favorite photographic subjects over the past three years, but somewhat elusive. She used to wear blindfolds or masks, almost always keeping her eyes hidden. The first couple of times I photographed her, all I had was a point-and-shoot camera, so my pictures were not quite as high-res as I wished. Here’s a retrospective of previous Brazilian Girls shows I photographed (click on the images to go the galleries of more photos). At SXSW 2005, she was wearing a sort of workout get-up with asymmetrical puffy appendages. Later that year at Metro, she wore a flesh-colored body suit with black bars across her eyes, chest and crotch like a censored character from a porn film… and halfway through the show, she tore off the breast bar to reveal a knife in her chest. In 2006 at Metro, she covered her body with colored balloons. 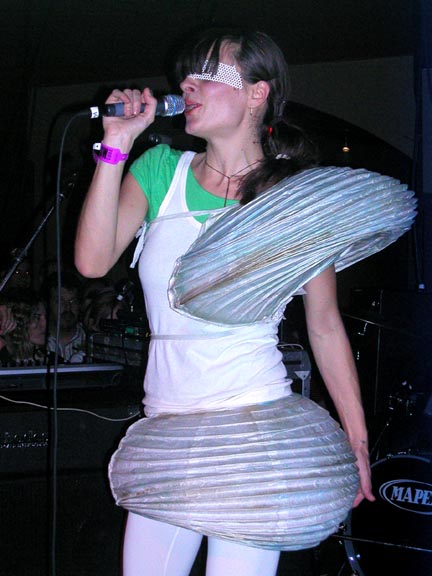 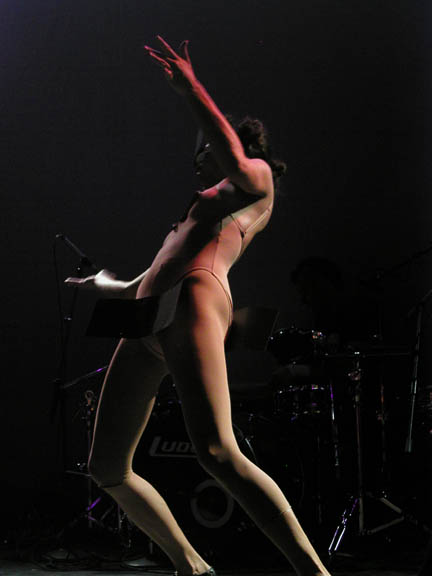 This time around, she is in a puffy white outfit, showing lots of leg and twirling a parasol (for the first song). And, hey, no blindfold. She lets us see what her eyes look like! She even says good-bye to us photographers as we depart the photo pit at the end of the third song. Aw, how sweet.

Black Kids became a buzz band last winter on the basis of nothing more than some myspace tracks. The buzz is still going, and the band puts on a pretty impressive show at Lolla. Yes, a couple of them are in fact black “kids,” though the others have fairly pasty complexions. Politically incorrect? Ironic? Whatever. The band’s music sounds at times like disco pop (a little too much), but there’s also some punk attitude and actual electric guitar. And lots of youthful gusto. PICTURES OF BLACK KIDS.

Next, I see just a little bit of the set by Eli “Paperboy” Reed & the True Loves. Another dumb name… Hmmm, this guy’s horn-heavy soul music sounds all right, but not so great that I’m going to miss the show by Saul Williams about to begin on the other side of Buckingham Fountain.

Williams’ musician come onto stage dressed like vampires and spacemen, and then Williams storms out with war paint around his eyes and feathers sticking up from his head. The music in the photo pit is so loud that I can feel the vibrations in my body. I move over a bit to avoid, well, whatever health problems massive vibrations might induce. Williams sounds as fierce as he looks, spitting out words in a manner that’s sort of like hip-hop but with an entirely different spirit and style to it. It’s rap-rock, I guess, but it also sounds different from most of the stuff I’ve heard with that label. At one point, Williams remarks: “We on this stage know race is a social construct. And we can see beyond it.” PICTURES OF SAUL WILLIAMS.

The next set feels like a Lollapalooza flashback. Gnarls Barkley was one of the big names at the fest in 2006, when “Crazy” was the hot song of the summer. The duo and their crack backing band are back again, sounding as good as ever. This time, Danger Mouse takes his rightful place at the front of the stage, next to singer Cee-Lo, instead of trying to hide in the back as he did last time. Another strange spectacle that reminds me of Radiohead the other night: As a grinning Cee-Lo sings lyrics about madness and suicide, the crowd waves and sings like it’s a beach party. PICTURES OF GNARLS BARKLEY.

Over on the other end of the park, The National play one of Lolla 2008’s best sets. This band has perfected a style of stripped-down, tense arrangements for its songwriting. There’s a simmering intensity, which finally explodes in the last song. PICTURES OF THE NATIONAL.

The headliners tonight are Nine Inch Nails and Kanye West. To be honest, neither is one of my personal favorites, but I’m curious about both. I watch the first half-hour of NIN, impressed by the band’s muscular attack. Trent Reznor has one of those punk-rock-bodybuilder statures as he leans into his microphone stand.

I head over to the south end of the park, fully expecting to be annoyed by the Kanye West show. I found his performance at Lollapalooza in 2006 irritating. Kanye’s rants about sound problems and whatever else was bothering him derailed all of that concert’s momentum. But lo and behold, as I approach the crowd surrounding Kanye’s stage this time, I sense that things are different this time. Hutchinson Field is not as full as it was for Radiohead or Rage Against the Machine, but tens of thousands of fans are waving their hands and singing along to Kanye’s hip-hop hits. There’s a feeling of good spirits and joy in the air. This time, Kanye shows a much more assured sense of how to be a showman, keeping the music rolling. The arrangements soar with orchestral flourishes, and the crowd seems to love it.

Yes, Kanye voices some of his typical complaints… moaning about how people say he’s cocky. Maybe if he talked less about being criticized, he wouldn’t be criticized so much. This guy’s narcissism just circles back in on itself again and again. But somehow, he manages to seem a little less cocky to me this time… or maybe I’m just more forgiving. In any case, I find myself enjoying his show a lot more than I’d expected. There’s something to be said for being surrounded by enthusiastic fans. PICTURES OF KANYE WEST.