DAY TWO, Aug. 2: I start out the day by catching a little bit of Margot and the Nuclear So-and-So’s. The group’s songs still seem a little generic to me, though the big instrumental ensemble sounds good playing them. I head down the field for the British duo Ting Tings (guy on drums and vocals, girl on guitar, keyboard and vocals), who are doing a kind of dance rock. Seemed like part electronic, part guitar rock. I’m not sold yet on the songs, but the performance is fun. PHOTOS OF THE TING TINGS.

I’ve been a Dr. Dog fan since seeing them open for M. Ward a few years back at Schubas, and I’ve seen them several times since. I’m still letting their new album sink in, but I always find a lot to admire in the subtleties of their compositions (even if the recordings aren’t always that subtle). They’ve got a classic sense of harmony and melody that brings the late 1960s Beatles and Beach Boys to mind, with some early ‘70s Faces hints, too. They’re a rambunctious bunch on stage, with lots of cartwheeling moves. When I saw them at SXSW in March, they seemed a bit under the weather or something, though they still played fine. Their Lolla set is better, really bringing out the both the energy and the smarts behind their songs. PHOTOS OF DR. DOG.

I read a rave review of Foals not long ago in the New York Times, so I suppose they’re one of the latest bands from the UK to get some buzz. I head over to the Lolla stage where they’re playing. I’m pretty impressed by what I hear. Not that I’m hearing anything I haven’t heard before. This is yet another group taking inspiration out of the herky-jerky post-punk of groups like XTC and Gang of Four. They have a good pop sensibility, too, and I even hear a little bit of early U2 in their tunes. I like it enough to stick around for nearly the entire set, an experience which is something of a luxury in the hectic pace of Lolla. PHOTOS OF FOALS.

After traversing the length of Grant Park six times on Friday, I somehow manage to schedule my Saturday so that I only go the distance once. After Foals, all of the bands I really want to hear are playing on the two stages at Butler Field on the north end of the park, so that’s where I spent most of the afternoon and evening. The first of these is Devotchka. I haven’t seen this group for a long time, not since they were an opening act at the Abbey Pub. They’ve grown in popularity quite a bit since then, and they also seemed more sophisticated and more fun than I recall. I love their colorful sonic palette, with accordion, violin and sousaphone combining in multicultural music. I feel a strong similarity to the music of Calexico. PHOTOS OF DEVOTCHKA.

Some of the recent bands playing instrumental rock music sound like they’re playing songs that still need lyrics. That thought never crosses my mind, however, as I listen to the Lolla set by Texas group Explosions in the Sky. The compositions have that cinematic quality, and the band lives up to its name with some thrashing guitar solos. PHOTOS OF EXPLOSIONS IN THE SKY.

Okkervil River is next, and as always, lead singer Will Sheff gives an impassioned performance of his highly literate songs. The lineup of the band is a little different than the last time I saw Okkervil, but they still sound strong. It looks like Sheff is pouring out every once of his soul. PHOTOS OF OKKERVIL RIVER.

Broken Social Scene makes some good records and also puts on lively shows, with a sort of jamboree feeling, thanks to the big number of people onstage. I feel my enthusiasm lagging a bit during their Lolla set, however. Maybe I’m just getting tired. The music isn’t bad at all, but I feel like lying down for a while… Although he’s Canadian, ostensible BSS leader Kevin Drew offers the crowd some advice on how to vote in November. He’s for Obama, of course. (Are there any indie-rock musicians backing McCain?) “You’re not just voting for your country,” Drew says. “You’re voting for everybody.”
PHOTOS OF BROKEN SOCIAL SCENE.

And now, finally, some real soul music. The Dap-Kings take the stage, and after warming up with some intro music, here comes Sharon Jones – former prison guard, longtime soul singer, human dynamo. She’s really something else. The band is super tight, with a powerful horn section, and Jones’ voice sounds just as strong as those trumpets and saxes. She talks about how much shorter she is than Tina Turner but vows, “I’m going to shake it like Tina Turner.” And she does. She gets the crowd into a dancing mood, too. A definite Lolla highlight. PHOTOS OF SHARON JONES & THE DAP-KINGS.

Next, I face the choice between two headliners: Wilco or Rage Against the Machine. I’ve seen Wilco so many times that I should probably try out something different, but I was never a Rage fan, so I go with the safe choice. As the Wilco concert gets under way, I start hearing via text messages about the madhouse at the other end of the park. From a reporter’s standpoint, I regret missing all the action down there, but as a concertgoer looking to enjoy myself, I’m relieved that I missed out on the moshing. I also stick around at the Wilco show after hearing the rampant rumors that Barack Obama might make an appearance. He turns out to be a no-show, of course. (To read more about what went on during the Rage Against the Machine show, check out the Chicago Sun-Times blog.)

The members of Wilco are all decked out in colorful Nudie suits in the tradition of country-music stars, with some pyschedelic patterns. Jeff Tweedy jokes that the band spent months sewing in preparation for its Lolla gig. Wilco plays one new song, with Tweedy saying, “This one’s what we call a WIP – a work in progress.” The song sounds similar to the music on Wilco’s 2007 album “Sky Blue Sky,” with a mellow opening that builds to a more raucous guitar-solo climax.
The show feels a little low-key at first, but it picks up steam at the end. Three horn players, known as the Total Pros, join Wilco for several songs late in the set, adding some R&B oomph. Wilco reinvents a few of its old tracks, injecting more of a soul feeling into songs from “Summerteeth” and “Being There.” The epic “Spiders (Kidsmoke)” sounds less techno and more organic than the studio version, as the band stomps through those loud electric chords with a cathartic sense of abandon. PHOTOS OF WILCO. 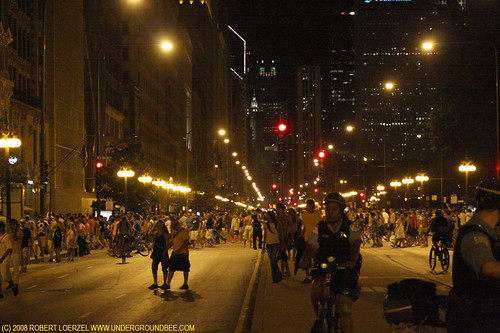 At the end of the night, thousands of people stream out of Grant Park Saturday night onto the streets of downtown Chicago. Several times, the rock fans walking down the middle of Michigan Avenue break out into spontaneous applause, whooping and clapping. Nothing in particular seems to provoke these outbursts. It seems like these concertgoers just have to express their enthusiasm one more time after a long day of music. Or maybe what they’re saying: “Hey, it’s almost like we own these streets!”