Notes on some plays I’ve seen recently in Chicago… 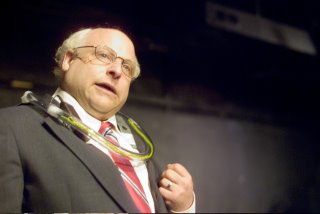 THE TROJAN CANDIDATE by Theater Oobleck – Last year’s production of The Strangerer by Theater Oobleck was one of my favorite plays of 2007, one of those rare shows that take political satire to a higher artistic level, leaving haunting impressions in your mind. The latest election play by the Oobleck group, The Trojan Candidate, is no match for its predecessor, though it does have its moments. The premise this time is that an alien occupying the body and brain of Dick Cheney is looking for a vessel among this year’s presidential candidates, in the hope of keeping control at the White House. Actor Jeff Dorchen looks remarkably like Cheney, and the rest of the cast has fun juggling a variety of roles; Danny Thompson is pretty amusing as John McCain. But pretty amusing is about as good at it gets in this intermittently funny show, which feels more like an extended comedy skit than a fully realized play. At times, The Trojan Candidate begins to move into deeper and more surreal territory, such as when Sati Word plays Barack Obama recounting various dreams he has had. The dreams are as absurd as dreams usually are, without any obvious punch lines. In these moments, one senses the more profound play that could emerge out of this material with more work. Continuing through Nov. 3 at the Neo-Futurarium. www.theateroobleck.com. (Photo by Kristin Basta.) 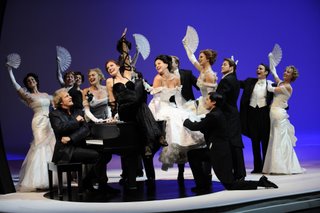 TURN OF THE CENTURY at the Goodman – Man, some of the reviews of this show have been harsh. I found some of the same flaws as did other critics, especially with the rather flimsy plot. It’s a blockbuster premise – singer and piano player from 1999 travel back in time to 1899 and make a mint by selling all the great songs of the 20th century – but it doesn’t really go places. In spite of the play’s shortcomings, I found it fairly entertaining, however. That set wowed me, and the music and dancing were fine. Yes, I wanted more out of this show, but I came away thinking it could prove to be a popular hit. www.goodmantheatre.org. (Photo by Liz Lauren.) 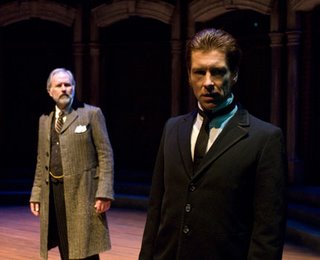 DR. JEKYLL & MR. HYDE at the Northlight – This one received some criticism for straying too much from the original Robert Louis Stevenson book. I found it quite enjoyable, with a great set and lighting, plus a sharp cast featuring four actors playing Mr. Hyde at various times. A few gruesome moments, a fair amount of theatrical razzle-dazzle, and an excellent turn by Nick Sandys at Dr. Jekyll. A good show to see during the Halloween season. www.northlight.org (Photo by Michael Brosilow.)

PICNIC at Writers’ Theatre – Following up a superb production of another William Inge play, Bus Stop, Writers’ Theatre in Glencoe has another winner. David Cromer, who did such a fine job with Our Town for the Hypocrites and Adding Machine for Next, once again shows a strong talent for bringing subtle performances out of his actors. And the reconfigured space at Writers’ Theatre makes us feel like you’re in the midst of the action. www.writerstheatre.org. (Photo by Janna Giacoppo.)