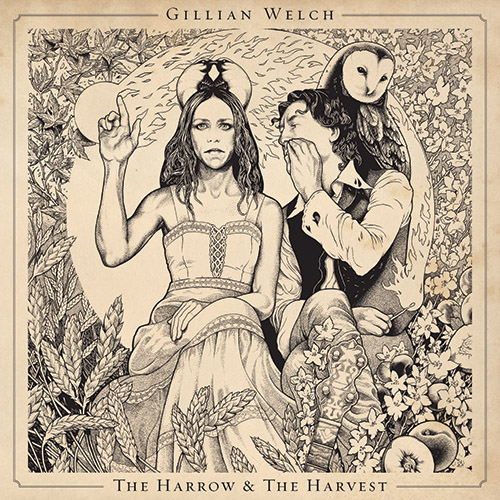 of the great musical mysteries of the past decade has been the lack of new songs by Gillian Welch. Her first four albums left little doubt that she’s one of today’s best songwriters. But eight years have gone by since her last album, 2003’s Soul Journey. She hasn’t been a recluse during that time. She’s continued to perform concerts, and she backed up her longtime partner and musical collaborator, David Rawlings, on his project, the David Rawlings Machine. But it’s been a long time since we’ve heard a new batch of songs by Welch.

The wait is finally over. Tuesday (June 28) is the release date for Welch’s fifth album, The Harrow & the Harvest. The good news is that she and Rawlings are up to their old tricks. This record does not reinvent their formula — not in the least. And that’s just fine. Why fix something that isn’t broken? Welch writes, sings and plays modern-day old-timey music. That is to say, the idiom is old-fashioned, a style of folk song with its roots in bluegrass, gospel, blues and other old traditions. And even the words Welch sings can seem as if they’re ripped pages out of some century-old chapbook. But this is a modern girl singing, and sometimes contemporary references surface on the lyric sheet. The feelings are certainly universal, penetrating from whatever distant, imaginary place these pieces of mountain music are supposedly set.

As with most of their previous recordings, Rawlings co-wrote all of the songs here, and his fluid soloing on the acoustic guitar is a constant presence. Rawlings sings subtle harmonies — his voice is never distinct enough for its own personality to emerge, but it lends an emotional undertow or uplift to Welch’s lead vocals — but the real duet going on here is the pairing of Welch’s voice with the singing of Rawlings’ guitar strings, a really exquisite dance. Welch doesn’t have the grandiose voice of a diva, but she doesn’t need it with this music. For all we know, she might be capable of more flamboyant singing that would wow us, but her personality seems too modest to try knocking us over by belting out a big note. She’s subservient to the songs and the stories they tell.

The production of The Harrow & the Harvest sounds as simple as could be: two voices and two guitars, and just about nothing else. (What else is there? A bit of banjo, some harmonica and a hand knocking on the body of a guitar.) The performances sound like live concert performances, without any overdubs, and with a spontaneous sense of invention in Rawling’s searching melodies on the guitar. There’s a lovely sense of stereo separation among these spare elements. Listen with headphones for the full effect.

And the songs? These are another 10 great ones by one of our greatest songwriters. The album opens with “Scarlet Town,” a lively number that jumps along, thanks to some fast runs on Rawlings’ guitar. The lyrics are ominous, describing a mysterious place the narrator visits despite being warned to stay away. “The things I seen in Scarlet Town did mortify my soul,” Welch sings. “Look at deep well, look at that dark grave, they’re ringing that iron bell in Scarlet Town today.” A metaphorical place? A state of being? It seems so: “You left me here to rot away,” she sings, adding later: “I’ve been looking through a telescope from hell to Scarlet Town.”

Then the record shifts gears with the second track, “Dark Turn of Mind,” which sways along, softly and slowly. The melody is so beautifully bittersweet that it’s hard to know if Welch (or whoever her character is this time) is happy or sad. “You’ll never know how happy I’ll be, when the sun’s going down,” she sings. And as the song ends, she confesses to being the sort of person with one of these dark minds, but she doesn’t make it sound like such a bad thing. “Some girls are as bright as the morning. Some girls are blessed with a dark turn of mind.” It seems like a confession, to having the sort of personality that doesn’t fit into the conventional idea of a happy, normal person.

The album continues on in this vein, shifting tempos and moods and styles, but all within the framework of old-fashioned acoustic music that Welch and Rawlings have honed during their many years together. The melodies and chord progressions take some delicious and unexpected turns at a few points, adding depth and sophistication that go far beyond simple three-chord ditties.

Even in a song that sounds fun, like “Six White Horses,” which features banjo, harmonica and a hand-slapping rhythm, the lyrics are foreboding and Biblical. “Six white horses, coming two by two, coming for my mother, no matter how I love her…” At first, it seems like just a simple description of some animals — but then it becomes a harbinger of death. And by the end of the song, the horses are coming after the song’s narrator. But while your mind wanders to thoughts of those horses straining at the reins, the music keeps clopping happily along. It’s a joy to hear.

That’s the sort of dichotomy that makes Welch’s music so wonderful. But more than anything else, to put it quite simply, this is beautiful music, skillfully written and superbly performed. It’ll take many more listens to decide how The Harrow & the Harvest rates in Welch’s already accomplished discography, but it’s already certain that this record’s more than up to snuff. Gillian Welch is back, and that’s a cause for celebration.