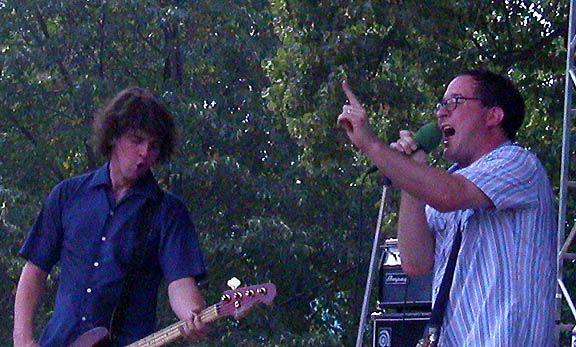 I missed all of Day 1… Decided I couldn’t pass up the opportunity to see Van Cliburn last night at Ravinia, and didn’t want to deal with the hassle of trying to do both in one day. I’m certainly not the best judge of classical piano performances, but I can say Van a rivetingly peculiar presence onstage…

I thought I would see all of the Intonation Fest today, but after getting an early start, the heat and long lines got to me, so I bailed out after Andrew Bird.

Lines were actually quite short for most of the day, but after 5 p.m., the lines for food, beer and water all got humongous and I didn’t feel like standing around in line to get those essentials.

I enjoyed everything I saw, to some extent: Thunderbirds Are Now! seemed pretty good, but I need to hear more of their music to say how much I’d recommend it.

I like bands that sing in their native tongues, so I was keen of the Swedes in Dungen… who even trotted out a flute for some Jethro Tull-like moments. I was expecing ’60s-style garage rock, but it sounded more ’70s to me. Good,
in any case.

Xiu Xiu were slightly abrasive, but made nice use of autoharp (?) … I’d like to hear more of their stuff. I liked the sound, though I don’t know if the songs were all that strong.

Out Hud’s dance music wouldn’t normally be my kind of thing, but I liked the funkiness of it. Seemed more “live” than a lot of electronic concerts.

The Hold Steady were great. I was a little skeptical about these guys a year ago, but they’ve grown on me a lot. The lyrics are smart enough that the songs work as more than jokes. Is this band in a genre by itself? Who else is like them? It’s sort of like a mutant strain of white-guy rap that bears almost no similarity to hip-hop rap.

Andrew Bird was as brilliant as always. I love this guy … and I overheard a lot of comments from impressed concertgoers who’d never seen him before.

I was hoping to stick around for the Wrens and Les Savy Fav (not the Decemberists, though — I still don’t care for that band), but five hours of enduring that heat was enough… I don’t know anything about the other band that was playing, Deerhoof.

In any case, I hope the Intonation Music Festival is back again next year.