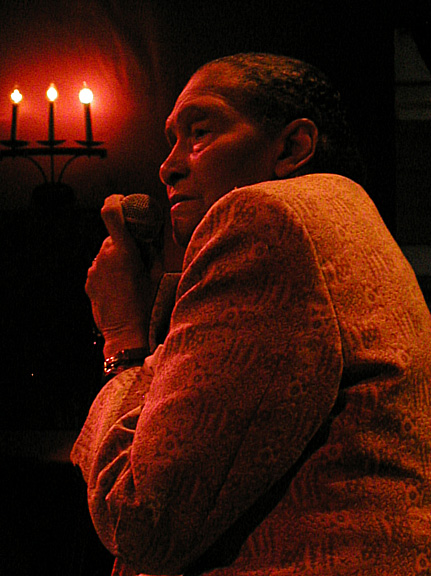 I’d almost forgotten that Jimmy Scott was playing in town last night, part of a tour celebrating his 80th birthday. It’s reportedly more than five years since the last time he played in Chicago, so this was a can’t-miss show.

I first became familiar with Scott when he provided that strange song, “Sycamore Trees,” to David Lynch’s TV series “Twin Peaks.” (The song actually appears on the soundtrack to the film, “Twin Peaks: Fire Walk With Me.”) Who was this singer with that elusive, androgynous voice? Adrogynous doesn’t really do it justice as an adjective. Otherwordly, maybe. I’m still not that familiar with Scott’s discography (though my purchase of The Essential Jimmy Scott last night should remedy that). He was the subject of an interesting documentary a few years ago, now out on DVD, and he made another weird cameo — singing John Lennon’s “Jealous Guy” with Wilco as his backup band in the Ehtan Hawke film “Chelsea Walls.”

The Lynch and Lennon songs were not part of Scott’s show last night, but he did live up to his billing as “the Legendary Jimmy Scott.” With a nice piano-bass-drums combo (the Jazz Expressions) playing behind him, Scott gracefully sang standards (“Blue Skies,” “Embraceable You”) and some of his past hits (“When Did You Leave Heaven?,” “If You Only Knew”).

Age has added an interesting timbre — and even more fragility — to Scott’s voice. He looked a little fragile himself, but reasonably spry for being 80 years old. And he had a nice sense of humor, joking with his band between songs. Unfortunately, he probably wasn’t joking when he said he hasn’t made much money from all those decades of recording and performing music.

The concert was short, but it’s hard to demand too much stage time out of a legend in his 80th year. The Chicago Gospel Keyboard Trio played a really nice opening set.