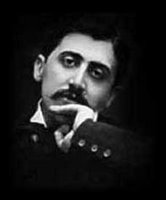 Another favorite passage of mine, this is from Swann’s Way by Marcel Proust. It’s a long excerpt, simply because it’s so hard to trunctate into any short quote that captures its essence. (I have broken it up into smaller paragraphs, however – sorry, Marcel, but when you blog, you need to keep those paragraphs a little shorter.) Quite simply, it’s one of the best descriptions of music’s fleeting and indefinable qualities.

The year before, at an evening party, he had heard a piece of music played on the piano and violin. At first he had appreciated only the material quality of the sounds which those instruments secreted. And it had been a source of keen pleasure when, below the narrow ribbon of the violin-part, delicate, unyielding, substantial and governing the whole, he had suddenly perceived, where it was trying to surge upwards in a flowing tide of sound, the mass of the piano-part, multiform, coherent, level, and breaking everywhere in melody like the deep blue tumult of the sea, silvered and charmed into a minor key by the moonlight.

But at a given moment, without being able to distinguish any clear outline, or to give a name to what was pleasing him, suddenly enraptured, he had tried to collect, to treasure in his memory the phrase or harmony—he knew not which—that had just been played, and had opened and expanded his soul, just as the fragrance of certain roses, wafted upon the moist air of evening, has the power of dilating our nostrils. Perhaps it was owing to his own ignorance of music that he had been able to receive so confused an impression, one of those that are, notwithstanding, our only purely musical impressions, limited in their extent, entirely original, and irreducible into any other kind.

An impression of this order, vanishing in an instant, is, so to speak, an impression sine materia. Presumably the notes which we hear at such moments tend to spread out before our eyes, over surfaces greater or smaller according to their pitch and volume; to trace arabesque designs, to give us the sensation of breath or tenuity, stability or caprice. But the notes themselves have vanished before these sensations have developed sufficiently to escape submersion under those which the following, or even simultaneous, notes have already begun to awaken in us.

And this indefinite perception would continue to smother in its molten liquidity the motifs which now and then emerge, barely discernible, to plunge again and disappear and drown; recognized only by the particular kind of pleasure which they instill, impossible to describe, to recollect, to name; ineffable – if our memory, like a laborer who toils at the laying down of firm foundations beneath the tumult of the waves, did not, by fashioning for us facsimiles of those fugitive phrases, enable us to compare and to contrast them with those that follow.

And so, hardly had the delicious sensation, which Swann had experienced, died away, before his memory had furnished him with an immediate transcript, summary, it is true, and provisional, but one on which he had kept his eyes fixed while the playing continued, so effectively that, when the same impression suddenly returned, it was no longer uncapturable.

He was able to picture to himself its extent, its symmetrical arrangement, its notation, the strength of its expression; he had before him that definite object which was no longer pure music, but rather design, architecture, thought, and which allowed the actual music to be recalled. This time he had distinguished quite clearly a phrase which emerged for a few moments above the waves of sound. It had at once suggested to him a world of inexpressible delights, of whose existence, before hearing it, he had never dreamed, into which he felt that nothing else could initiate him; and he had been filled with love for it, as with a new and strange desire.

With a slow and rhythmical movement it led him first this way, then that, towards a state of happiness that was noble, unintelligible, and yet precise. And then suddenly, having reached a certain point from which he was preparing to follow it, after a momentary pause, abruptly it changed direction, and in a fresh movement, more rapid, fragile, melancholy, incessant, sweet, it bore him off with it towards new vistas. Then it vanished.

He hoped, with a passionate longing, that he might find it again, a third time. And reappear it did, though without speaking to him more clearly, bringing him, indeed, a pleasure less profound. But when he returned home he felt the need of it: he was like a man into whose life a woman he has seen for a moment passing by has brought the image of a new beauty which deepens his own sensibility, although he does not even know her name or whether he will ever see her again.

…at last, he ceased to think of it.

But that night, at Mme Verdurin’s, scarcely had the young pianist begun to play than suddenly, after a high note sustained through two whole bars, Swann sensed its approach, stealing forth from beneath that long-drawn sonority, stretched like a curtain of sound to veil the mystery of its incubation, and recognised, secret, murmuring, detatched, the airy and perfumed phrase that he had loved. And it was so peculiarly itself, it had so individual, so irreplaceable a charm, that Swann felt as though he had met, in a friend’s drawing-room, a woman whom he had seen and admired in the street and had despaired of ever seeing again…