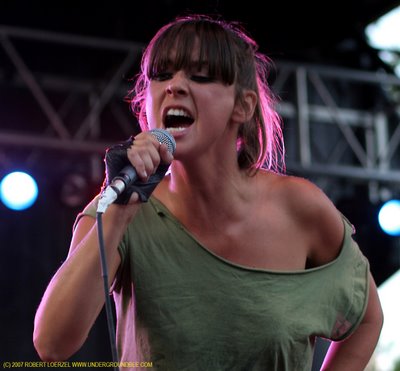 Pitchfork’s second day started bright and early with THE TWILIGHT SAD, a fine band out of Glasgow that I saw recently at Subterranean. I’ve had a chance since then to listen a little bad to their debut, Fourteen Autumns & Fifteen Winters, and it’s an enjoyable listen. Maybe I’m a sucker for a Scottish accent, but things sound better with a burr. Their show at Pitchfork was fairly fun, though it did feel like their music would be more appropriate for a dark room late at night than a sunlit stage at 1 P.M. (A common problem at these fests but, hey, at least it’s easier to photograph these bands in actual light… Speaking of which, my photos from the first half of Saturday afternoon mysteriously disappeared when I thought I’d transferred them onto my computer. Oh, well…)

CALIFONE followed, with the sort of low-key yet involving set that’s typical for this Chicago band. I know some people love their records, but I’ve always found them better in concert. More of the groovy vibes that are hidden between the grooves of the records come through. (I also caught just a few minutes of KEN VANDERMARK’S POWERHOUSE SOUND on the side stage… not enough to offer a critical judgment other than noting that Vandermark was blowing his sax with gale force for the little bit that I saw.)

VOXTROT put on quite an entertaining set, replete with lots of rock-star posing and leaping. They didn’t dress like glam rockers, but I picked up something glam in their sound.

GRIZZLY BEAR is growing on me. I’ve seen them open for Feist and TV on the Radio; at Pitchfork, the band offered more of its subtle and mostly quiet music. It’s quiet, but it occasionally soars into more anthemic territory. The set was slightly marred by some sound problems, forcing a delay between songs – just one of many technical difficulties at Pitchfork. For the most part, the good music cut through the feedback and sonic murk this weekend, but it was disappointing that so many sets ran into sound problems.

I ran over to the side stage and caught a few songs by BEACH HOUSE, whom I saw recently at Subterranean. Pretty and chill music. Do I hear a little Nico?

BATTLES is winning a lot of praise for its virtuosic, intricate and highly percussive rock. They seem almost like an instrumental band, because the songs that do have vocals feature heavily processed singing. Personally, I find those cartoon-character vocals a little annoying. It would be OK on one or two songs, but after that, it becomes a gimmick. Battles was fairly impressive as a live act (despite a long lull due to more technical difficulties), but I’d like to see them either go with real vocals or none at all. I liked the weird setup for the drummer, with one cymbal high above his head. I’m not sure what the point was, other than creating a strange look, but it was interesting. SEE MY PHOTOS OF BATTLES.

IRON & WINE is another band I haven’t totally fallen for, despite the adoration they (or he?) receive elsewhere. I do like Iron & Wine’s studio music in small doses, and when Sam Beam recruits a good band to play behind him (as he did with Calexico), the results can be an improvement over the super soft studio tracks. For this show, he had a group of Chicago musicians backing him, including ex-Wilco member LeRoy Bach on keyboards, giving the music more of a roots-rock feel. At moments, it almost rocked. SEE MY PHOTOS OF IRON & WINE.

MASTODON is not exactly my kind of music. I can’t profess to listening to much metal, even the newer and more critically respected variations of metal. But these guys rocked like hell and were fun to photograph. For headbangers and their ilk, I’m sure the Mastodon set was a highlight of Pitchfork. A cloud of dust got kicked up from the ballfield near the stage, creating an appropriately hellacious visual effect in the middle of the show. SEE MY PHOTOS OF MASTODON.

OXFORD COLLAPSE is an excellent band from New York on the Sub Pop label, putting across indie-pop songs with a vocal intensity that reminds me of groups such as Wolf Parade and Modest Mouse. They do it all with just three musicians, and they were an enthusiastic and fun bunch onstage. SEE MY PHOTOS OF OXFROD COLLAPSE.

CLIPSE got a lot of plaudits last year for the hip-hop duo’s record Hell Hath No Fury. To a neophyte such as myself, the raps were not too appealing and the words were only intermittently intelligible in the mix. Late in the set, one of the Clipse dudes proclaimed that they’d made the album of the year (or was that “motherfucking album of the year”? I can’t recall exactly where he interjected that ubiquitous four-syllable swear word as a modifier), not matter what anyone else thinks. SEE MY PHOTOS OF CLIPSE.

(Around this time was when Dan Deacon prompted some havoc over at the small Balance Stage, with lots of crowd surfing and crowding. When the fence separating the audience from Ogden Avenue looked like it might topple, the fest’s crew shut down the performance early. I missed all of that, but heard about it all weekend.)

CAT POWER’s show Saturday night show with her new backup band, Dirty Delta Blues was one of the highlights of the festival for me. As the group’s name suggests, it was a bluesy set, with organ and guitar licks giving Cat Power’s music a sound akin to 1960s British-invasion blues rock. Although Cat Power (aka Chan Marshall) apologized a few times, apparently unhappy with the sound or her vocals, her voice was in fine form. In addition to her own tunes, she played covers such as “Satisfaction” and “The Dark Side of the Street.” Sticking to lead vocals without playing guitar or piano, she kept the show on track, unlike some of her erratic concerts of the past. SEE MY PHOTOS OF CAT POWER.

None other than YOKO ONO was the headliner Saturday night. She’s revered by many but also frequently mocked for her music. I think she was just too different from the Beatles for pop music fans to understand. By including her in the festival, the Pitchfork folks made the case that she was a big influence on many of today’s cutting-edge rockers. She preceded her appearance with a overly long video emphasizing a message of peace. She opened with a simple little song she said she’d just written, before launching into the wild sort of screaming that she’s known for. A good portion of the audience headed for the exits. That’s not too surprising, I guess; she’s never had real mainstream appeal, and even the sort of people who turn out for an event like Pitchfork don’t necessarily like this kind of music. Myself, I liked some moments of it quite a bit. At other times, it was grating. It’s hard to define why some caterwauling is good and some isn’t, but that is the case, as far as I’m concerned. Thurston Moore of Sonic Youth joined Ono for a sort of duet – a duet, that is, between his abrasive guitar soloing and her abrasive banshee yells. SEE MY PHOTOS OF YOKO ONO.