1. Tom Waits, June 26 at the Fox Theatre, St. Louis. “Waits danced like a marionette last night, allowing some invisible strings to jerk his body to the rhythms of the band…” Review. 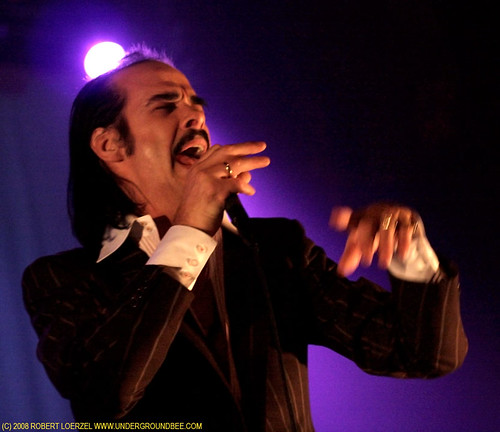 2. Nick Cave & The Bad Seeds, Sept. 29 at the Riviera. “Cave is a scary sort of preacher, and he prowled the stage with barely concealed sexual energy, his white shirt completely drenched with sweat….” Review.

3. Radiohead, Aug. 1 at Lollapalooza, Grant Park. “Girls in bikinis dance as Yorke sings about the next world war. People whistle and clap whenever Yorke holds a long, high falsetto note. A collective ‘Ahhh!’ goes up each time fans recognize the opening chords of a song…” Review.

4. Randy Newman, Oct. 12 at the Genessee Theatre, Waukegan. “That was just a gray-haired man with an ungainly voice playing a piano by himself up on the Genesee stage Friday night, but it felt like a cast of thousands…” Review.

5. The Ex & Getatchew Mekurya, Aug. 18 at the Pritzker Pavilion. “It was a perfect day, and the music was perfect, too. With the Chicago skyline there at my side and a terrific band right in front of me in the middle of the day on a Monday, I found myself thinking: Why isn’t life always like this?…” Review.

6. Boredoms, March 26 at the Congress Theatre. “All the drumming and sounds abruptly stopped, and all of the musicians paused, their bodies poised to bang away again. The band paused and paused. It was the sort of moment when fans at some concerts will assume that a song is over and start clapping, but everyone at the Boredoms show knew that this moment of silence was part of the music. The vast room was deadly quiet, no one making a sound, except an intake of breath. I could feel the audience recognizing something special in the moment. And then the hammer fell and the drumming resumed with more force than ever…” Review.

7. Neil Young, Dec. 9 at the Allstate Arena. “As soon as Neil Young walked out onto the stage, he launched into the sort of live-wire, feedback-drenched guitar solo you’d normally expect to hear at the climax of a concert… Stomping around the stage with his shaggy gray hair flailing around the balding crest of his head, Young squeezed out his notes as if the energy coming out of those guitar string was charging through his body….” Review.

8. Cat Power, Feb. 10 at the Vic. “Marshall showed a jazz singer’s sense of timing, letting her words drop behind the beat or run ahead of it… She seemed to feel an uninhibited freedom to roam the stage with her peculiar pantomime-like dance moves. She crouched down low as she sang, making gestures with her hands that sometimes acted out the words of the songs – or just reflected one of her fleeting whims. She held her hands in prayer, she flicked her fingers with a fish-like motion, she pretended she was clicking a remote control, and she circled a finger next to her head (the universal sign for ‘crazy’)…” Review.

9. My Bloody Valentine, Sept. 27 at the Aragon. “Fans standing near the stage could feel the floor of the Aragon shaking… It seemed like that chord might never end, but then it suddenly shifted back to the chorus of the song. A minute later, My Bloody Valentine’s musicians put down their guitars and left. There was no encore, and fans may have wondered if they’ll get a chance to see My Bloody Valentine any time in the next 17 years…” Review.

10. Sam Phillips, Sept. 6 at the Old Town School Of Folk Music. “Phillips often turned her eyes upward as she sang, sometimes darting her glance back and forth, and a smirk occasionally played across her lips. She seemed at peace with herself, and maybe a little amused…” Review.