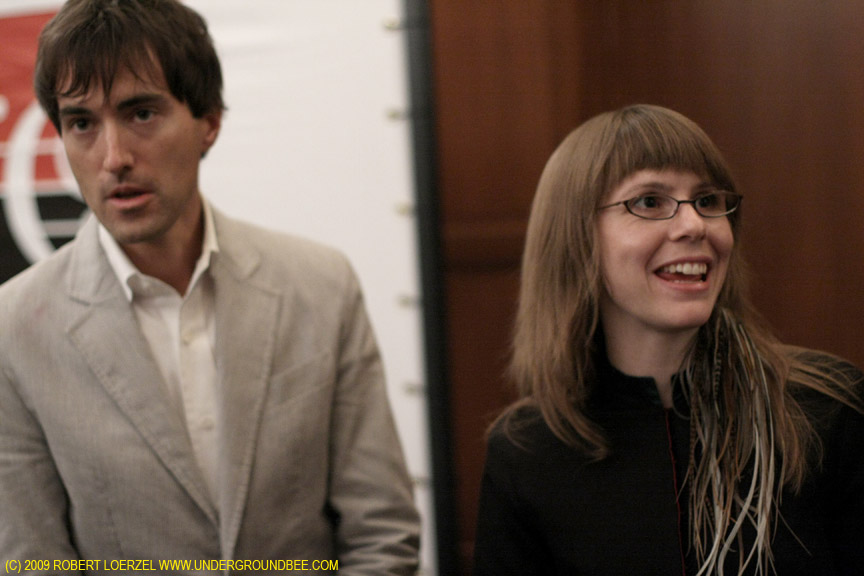 MusicNOW performances are the sort of concerts where you might actually get to meet the composers. The Chicago Symphony Orchestra presents these concerts of new music several times a year — but not inside the CSO’s usual home, MusicNOW takes place over at the Harris Theater for Music and Dance.

The 2010-11 MusicNOW series opened with a concert on Monday (Oct. 4), putting Mason Bates and Anna Clyne in the spotlight. They’re the CSO’s new composers-in-residence, and they’re playing a major role in shaping the MusicNOW concerts. (I took the above photo when they appeared Oct. 13, 2009, at a CSO press conference.)

Monday’s concert began with Enrico Chapela introducing his 2009 composition, “Li Po,” which was inspired by the famous Chinese poet. Cliff Colnot conducted 18 musicians, but they weren’t the only sources of sound. Other, more abstract noises came from speakers out in the auditorium, providing a stereo counterpart to the ensemble. In one passage, “Li Po” sounded like a deconstructed version of a more traditional orchestral piece. At another point, the sawing of the violin bows sounded like the cawing of seagulls, juxtaposed against a noise resembling the revving of motorcycles. Bells and gongs added some important punctuation points to “Li Po,” which concluded with all the string players plucking single notes simultaneously, making one impressive thwap.

Next, Marcos Balter introduced his 2009 string trio “Vision Mantra.” Violin, viola and cello played rapid, repeating lines, creating an aural puzzle as the notes overlapped and converged: Which instrument was playing which note? It wasn’t always clear until the violin or viola stretched out the notes above the more frantic backdrop.

Clyne’s “Steelworks” (2006) is industrial music — inspired by scenes of a steel factory at work. A video by Luke DuBois showing steel-mill images duplicated in a two-by-two grid played as Cynthia Yeh played a vibraphone and other percussion, creating rhythmic patterns. Wearing outfits that looked like factory uniforms, bass clarinetist John Bruce Yeh and flutist Jennifer Gunn came out onto the stage in the middle of the piece (something you don’t usually see at a classical concert) to play their parts. Near its climax, the piece featured notes that rose until they reached a pressure point and fell — something like a steam engine or hydraulic machine.

All of the composers were present at Monday’s concert except for Ana Lara — and as it happened, her piece, “Bhairav” (2000), was my favorite of the evening. While the other pieces all had striking moments, this was the one that, for me, was more than an interesting academic exercise. This string quartet found a balance between the beauty of melody and the eeriness of dissonance.

The concert concluded with Bates’ 2005 piece “Digital Loom,” which pitted organist Isabelle Demers against a click track of electronic beats. Although Bates said he was inspired by electronica, the rhythms he employs in “Digital Loom” aren’t exactly the more frantic sort of tempos usually heard on a dance floor. In the opening passage, the noises included something that sounded like frogs chirping. Divided into five movements but never pausing, “Digital Loom” felt more like a contest between the organ and the electronic beats than a duet. Spotlights cast red columns up from the stage as Demers played, creating a spooky, twilight mood in the dim auditorium.

The MusicNOW series will continue with concerts on Dec. 13, Jan. 31 and March 21. For details, see http://cso.org.