The crowd was unusually diverse Monday night (Jan. 31) during the Chicago Symphony Orchestra’s latest MusicNow concert at the Harris Theater — at least in terms of age and sensibility. These concerts tend to attract classical music fans — largely middle-aged and older people of the sort who have CSO season subscriptions — as well as younger audience members more interested in indie rock and experimental music. Of course, some of us are interested in all of these sorts of music. Monday’s concert featured a rare appearance by the cult German electronic duo Mouse on Mars, so it drew an even bigger contingent of the young folks than usual.

This made for some interesting people watching (and eavesdropping). An older woman sitting behind me — definitely a CSO subscriber type — was flipping through her concert program as she noticed an ad for a fundraising party called “Remix I: fusion.” She asked (I’m paraphrasing here), “Remix? What does that mean? I keep hearing that word but I have no idea what it means.” I think it’s safe to say “remix” is a regular part of the vocabulary for many of the younger electronica fans who were in attendance.

And then, when Mouse on Mars performed the world premiere of a composition for orchestral ensemble, it was interrupted a few times by smatterings of uncertain applause. I’m guessing the CSO regulars in attendance knew that it’s classical-concert protocol to wait until the entire piece is over and the conductor relaxes before clapping. Rock fans, on the other hand, are used to clapping whenever the music stops. 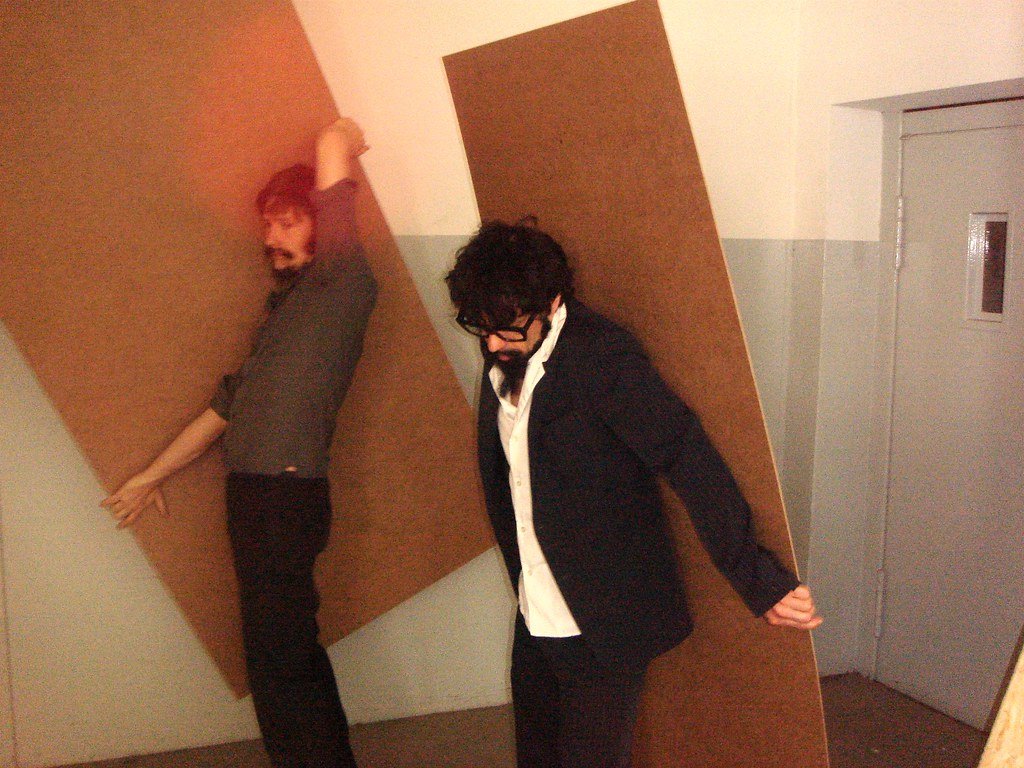 How you felt about the concert probably depended on your expectations. I suspect some Mouse on Mars fans would’ve liked to hear some music from their albums rather than focusing strictly on the new piece skik field. And what did the classical audience make of it? Perhaps critic Alan Artner was speaking for that part of the crowd in his review for the Chicago Tribune. As a rock-concert regular, I didn’t think twice about the way the show was staged, but Artner thought the smoke machines were “ridiculous” and the colored lighting was “unnecessary.”

For my part, I’m not deeply stepped in the music of Mouse on Mars, although I like what I’ve heard by the duo, which consists of Andi Toma and Jan St. Werner. I was eager to hear this collaboration. Like most pieces of music you hear in concert for the first time, it’s difficult to judge in terms of whether it’s a composition that will stand the test of repeated listens, but it was an intriguing, sometimes enthralling blend of Mouse on Mars’ glitchy electronic washes and beats with smartly arranged parts for strings and wind instruments.

The performance included parts 1, 2 and 11 of the new composition. What happened to the other parts? No clue. Maybe those are still being written. And it was hard to tell where one movement began and another ended, since there were more than two pauses. In one striking passage, the laptops, horns and strings joined together in a dissonant buzz that sounded like the Tibetan drones Philip Glass used on his Kundun soundtrack. At other moments, the music evoked styles ranging from Brazilian Tropicalia to the eerie, atonal atmospheres of Gyorgi Ligetti. Those pieces didn’t always fit together seamlessly, but the performance (conducted by André de Ridder) had the invigorating feeling of creative musicians trying out a new set of toys.

The most memorable part may have been when the string players moved their bows up and down without touching their instruments, making a rhythmic swishing. A few audience members giggled at the audacious musical gesture.

The first part of the concert was devoted to a performance of Argentine composer Martin Matalon’s 1996 piece Las siete vidas de un gato, which was conceived as a new soundtrack for the classic Luis Buñuel-Salvador Dali surrealist film Un Chien Andalou. The film, including that famous image of an eyeball being sliced, was projected during the performance. Matalon’s score was jaunty, zipping along at times like a slightly warped tango. A good piece of music, although it may try too hard to make this disturbing and darkly humorous film seem zany. The film had a stronger impact for me — a stranger juxtaposition of image and music — when I’ve seen it in the past with the recordings that Buñuel chose for it: excerpts from Richard Wagner’s “Liebestod,” the concert version of the finale to his opera “Tristan und Isolde,” and a recording of the continental tango “Olé guapa.”