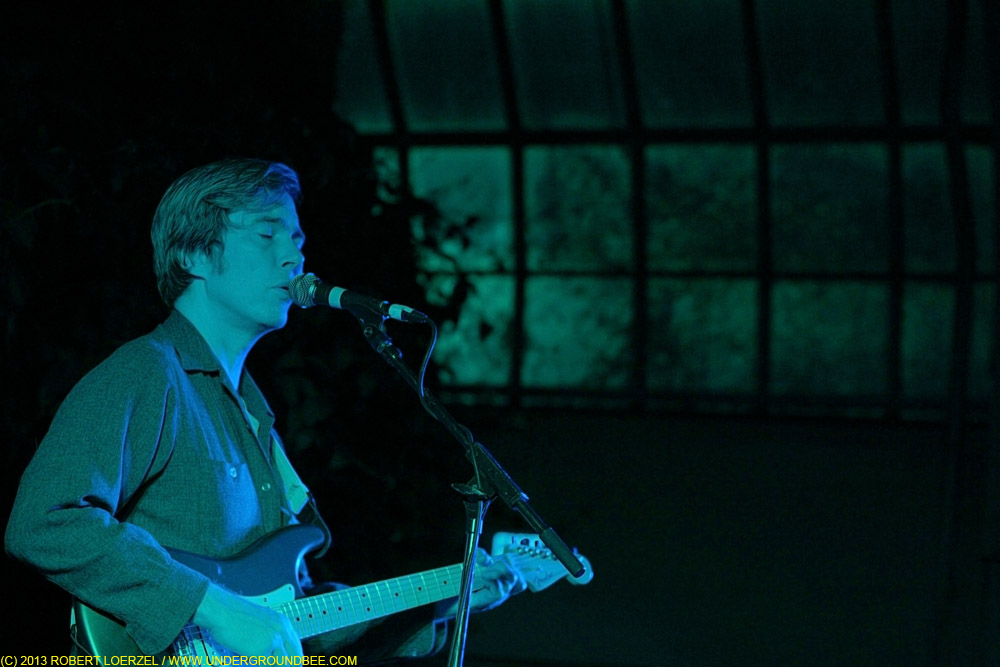 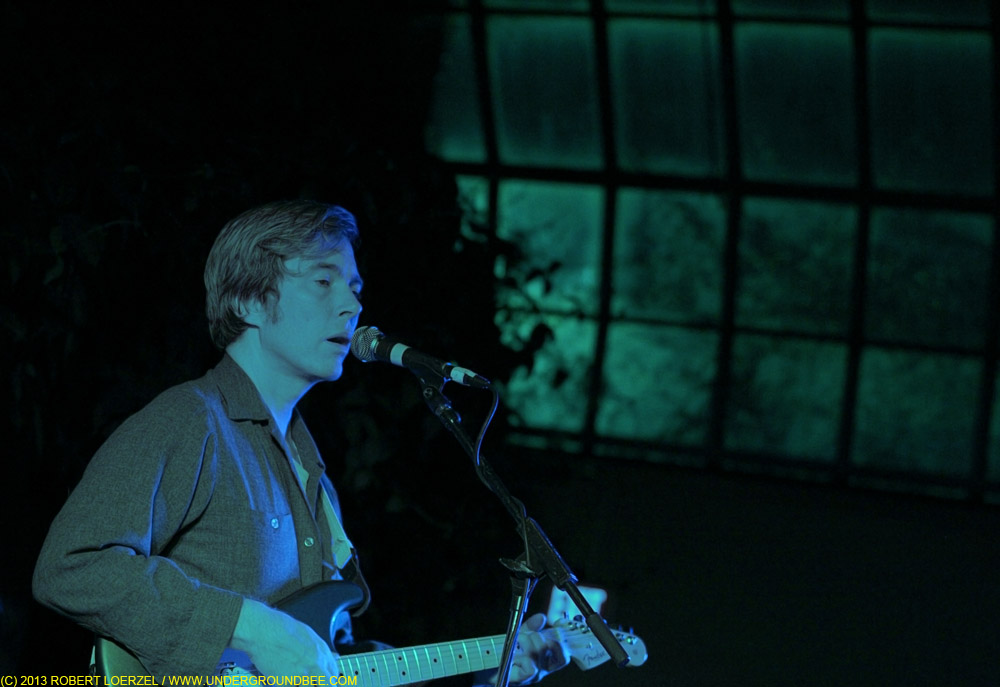 Bill Callahan’s been quiet lately, revealing no sign yet of a follow-up to his 2011 masterpiece Apocalypse. The beguilingly odd singer-songwriter made a welcome return to Chicago on Monday (May 6), playing at an unusual venue — the Garfield Park Conservatory — in a concert booked by Land and Sea Dept., which featured tap dancer Flat Foot as the opening act. As Callahan took the stage and looked out at the sold-out venue filled with about 400 fans, Callahan laconically remarked, “There’s a lot of people here. You look like trees.” And then, appropriately enough, he began with a song about trees. “There’s sap in the trees if you tap ’em,” he sang, beginning the concert with “Sycamore,” from his 2007 album Woke on a Whaleheart.

Callahan was in top form, stretching out his songs for emphasis at key moments, turning around phrases from his lyrics like incantations coming to him in a fever. Although the music was a far cry from Van Morrison’s, Callahan and the two players accompanying him on Monday achieved a mystic flow that occasionally evoked Morrison’s famous musical prayers. Guitarist Matt Kinsey, who played on Apocalypse and toured with Callahan in 2011, offered a sort of call-and-response to Callahan’s vocals, reeling off tiny guitar solos squeezed between the lyrics. There was no drummer this time, just Kinsey and bassist Jaime Zuverza. As a result, much of the music was wonderfully rubato (“intentionally and temporarily deviating from a strict tempo”). 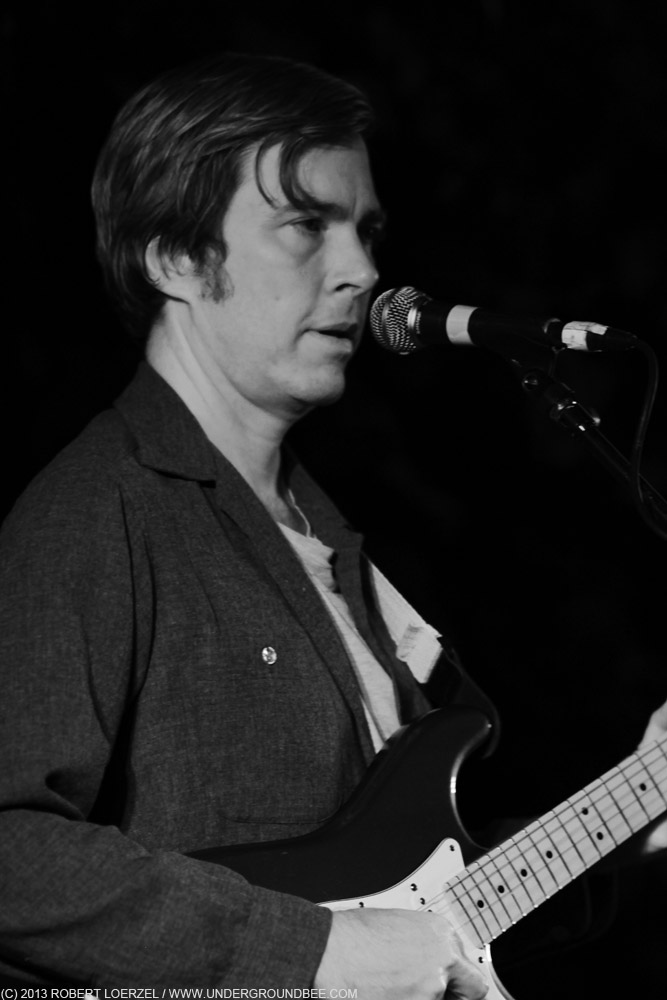 Callahan was more talkative than he has been at the previous concerts I’ve seen, showing a dry sense of humor. When he asked for more vocals in his monitor, a fan called out that the mix sounded great. Callahan replied, “It sounds different up here. Just so you know. Two different worlds. Trying to merge them into one.”

Callahan — who is known for his understated stage presence — later remarked: “A security guard asked me tonight if there’d be any Justin Bieber action. I’m doing my part. The rest is up to you.” 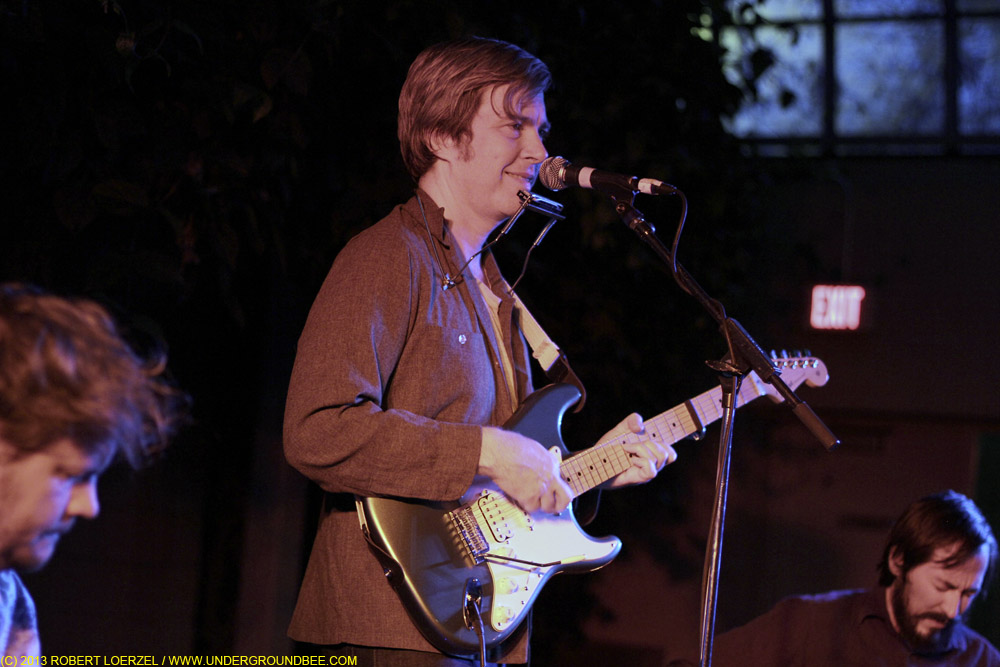 Callahan played one song from his early years when he recorded under the name (Smog), “Our Anniversary” from the 2003 album Supper, saying that he’s surprised people still want to hear him play it, but that he’ll keep playing it as long as fans request it.

He included two covers in his set: Percy Mayfield’s 1950 soul classic “Please Send Me Someone to Love” and Jim Jackson’s 1928 blues song “Old Dog Blue.” As he sang that old tune about a dog, a cat scampered along a nearby wall into the conservatory’s Horticulture Hall. In one quiet — practically silent — moment in between songs, Callahan noted the sound of a passing L train.

And after the main set finished and Callahan’s fans responded with enthusiastic applause, Callahan returned to the stage with his band and began strumming the chords to his 2011 song “Riding for the Feeling.” But before singing, he talked over the music for a bit, speculating on what life was like in 1908, when the Garfield Park Conservatory opened. He imagined how early people had to wake up for work back then. “Right after they got off stage, they got up … and were grinding their wheat for their breakfast,” he said — and then finally began singing lyrics that felt like the perfect way to end the night: “It’s never easy to say goodbye/To the faces/So rarely do we see another one/So close and so long…”

SET LIST: Sycamore / Universal Applicant / The Wind and the Dove / Drover / Please Send Me Someone to Love / Baby’s Breath / One Fine Morning / Old Blue / Our Anniversary/ Too Many Birds / ENCORE: Riding for the Feeling 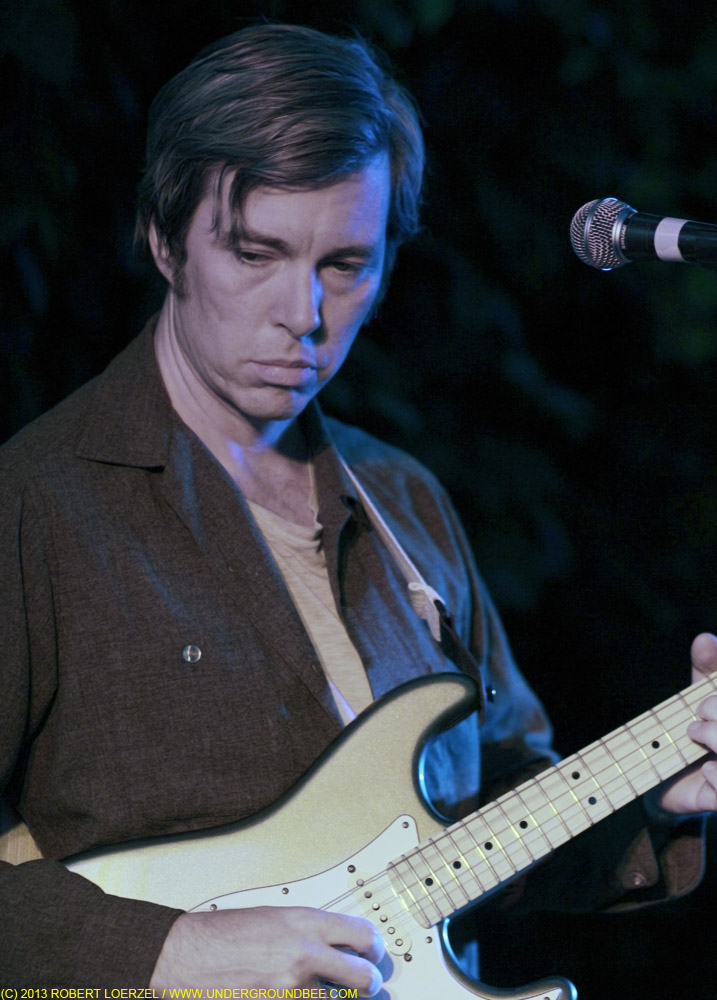 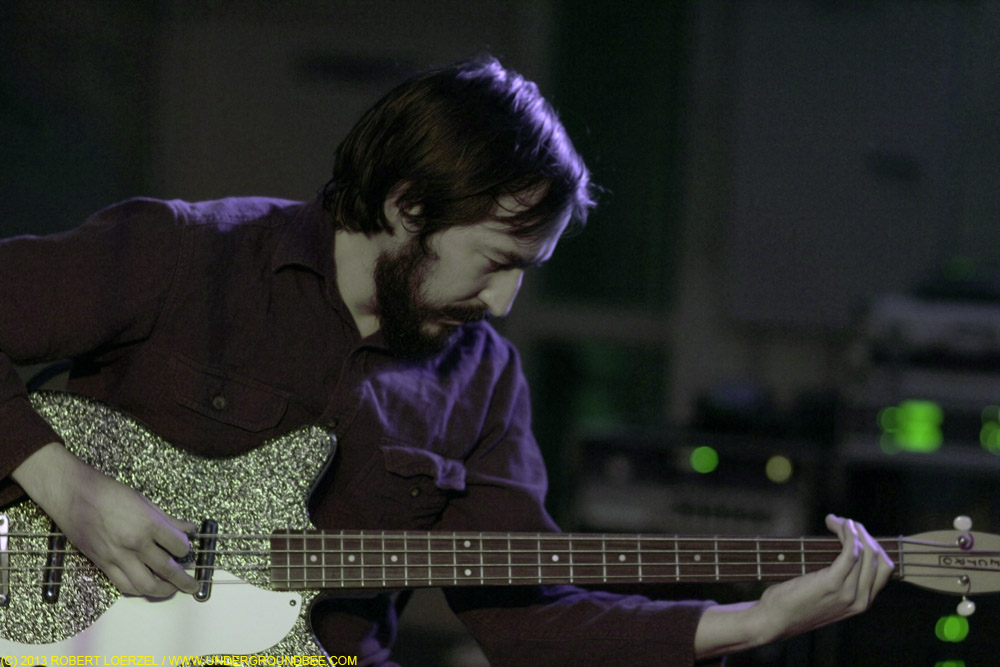 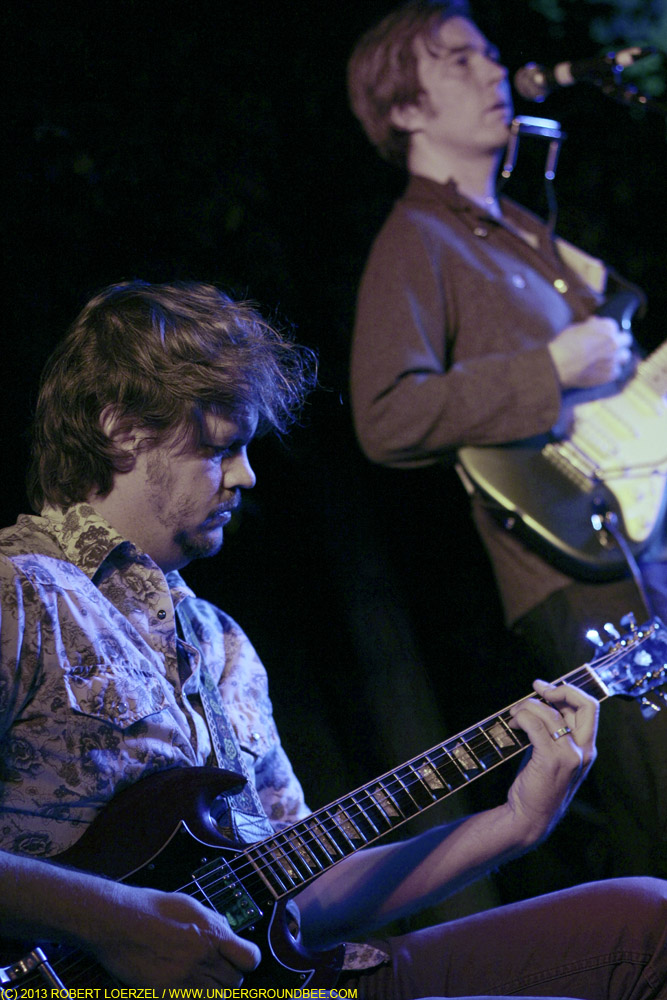 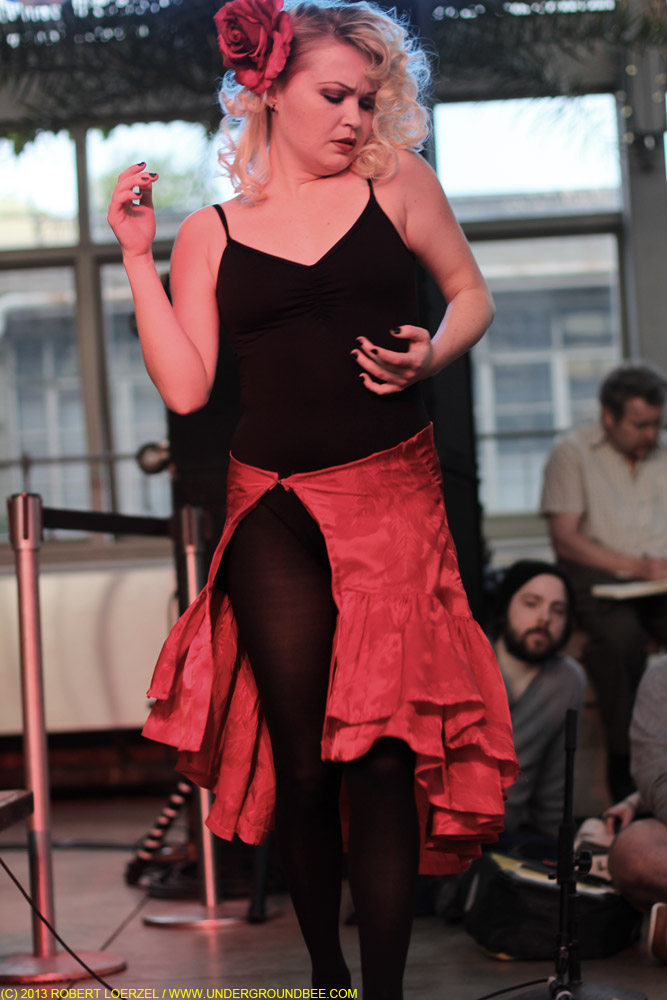 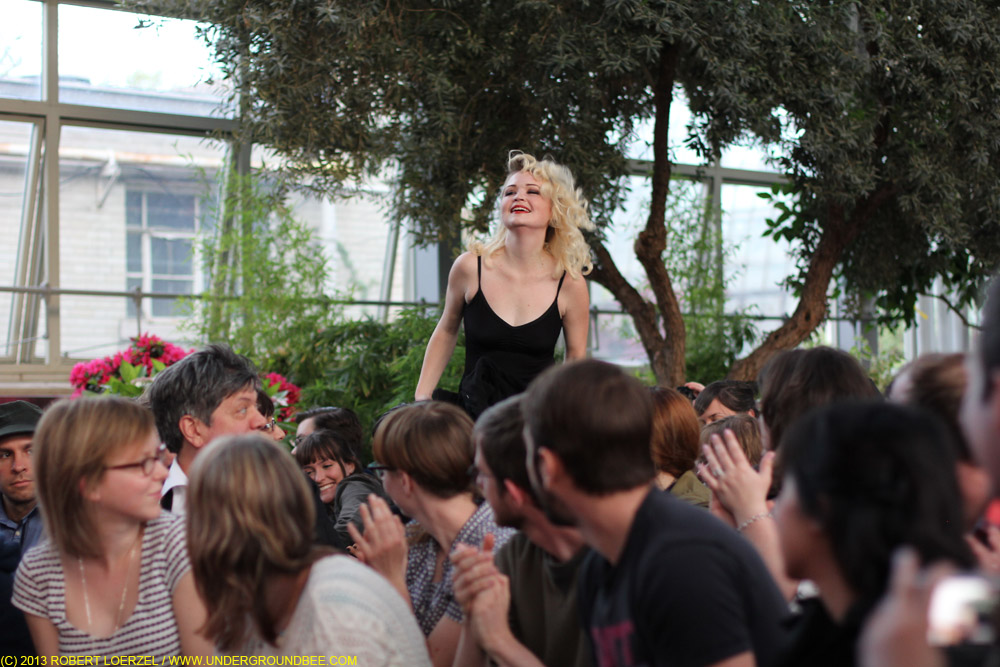