With his last several albums, Nick Lowe has settled into a new phase of his career: more of a mellow crooner than the pub rock and power pop guy he was during his youth. But one thing that hasn’t changed is Lowe’s ability to write perfect little songs, with smart and witty lyrics and catchy melodies, all within the bounds of what’s considered the traditional pop-song format. Lowe’s latest string of records is just adding more depth to his already deep catalog of unforgettable tunes.

Lowe was alone with his acoustic guitar on the stage Wednesday night (Oct. 2) at Space in Evanston. A few simple, strummed chords and his voice were all he needed. Well, that and his personality. What a charming and gracious fellow.

After playing his first two songs, Lowe looked down at his set list and said his “program” for the night included some of his old hits. “They are surrounded by what you might call my lesser-known pieces,” he said. “I want to apologize in advance if I don’t play your favorite.” There was no need for him to apologize, of course; yes, I can think of some favorite tunes he didn’t play, but what he did play was wonderful.

Lowe interjected some humorous asides during “Trained Her to Love Me,” in which the narrator (presumably not the real-life Nick Lowe) outlines his method of getting women to fall in love with him just so he can break their hearts. “Oh, that’s unforgivable,” Lowe said, to laughter in the crowd.

Lowe’s forthcoming release is a Christmas record, and when he introduced a song from him, he hastened to say: “I can feel you all tensing up, but don’t worry — I’m going to play you the least Christmasy tune.” And in fact, the song — “A Dollar Short of Happy,” which he co-wrote with Ry Cooder — sounded just fine in October.

Lowe added an intro with an Elvis Presley-esque flourish to “I Knew the Bride (When She Used to Rock ‘n’ Roll),” freshening up a song that had started to seem like a cliche after all of the radio play it got.

As he started his encore, Lowe remarked that Chicago was the first place where his old band Rockpile “took off,” which led him to play one of his songs with that band, “When I Write the Book.” Then came his classic, “(What’s So Funny ‘Bout) Peace, Love and Understanding,” which was just as touching as ever. And finally, a new song, “Tokyo Bay,” which he has been playing in concerts since last year.

SET LIST: Where’s My Everything / Heart / Long Limbed Girl / Ragin’ Eyes / Rome Wasn’t Built in a Day / She’s Got Soul / Lately I’ve Let Things Slide / Has She Got a Friend? / Trained Her to Love Me / I Live on a Battlefield / A Dollar Short of Happy / Cruel to be Kind / Raining Raining / Traveling Light / Stoplight Roses / Sensitive Man / Somebody Cares for Me / House for Sale / Without Love / I Knew the Bride (When She Used to Rock ‘n’ Roll) / ENCORE: When I Write the Book / (What’s So Funny ‘Bout) Peace, Love and Understanding / Tokyo Bay 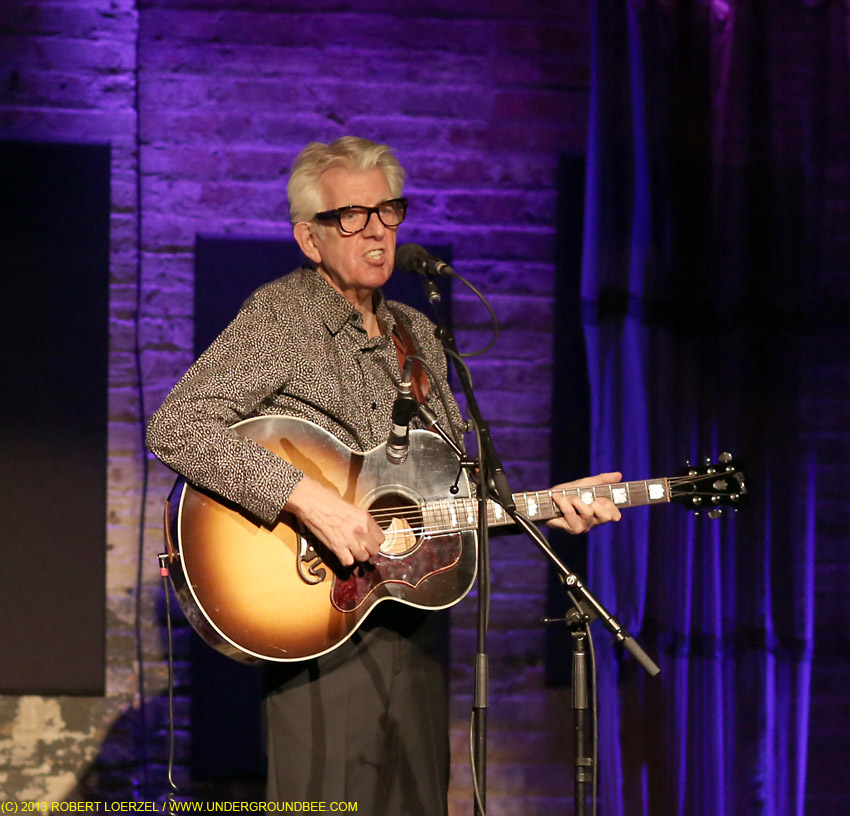 Lowe’s old friend Paul Cebar opened for him Wednesday. (He also opened the last Nick Lowe concert I saw, several years ago at FitzGerald’s.) Cebar’s breezy acoustic songs were a good match with Lowe’s; he played his originals as well as a couple of covers: Magnetic Fields’ “Book of Love” and Lowe’s “Crying in My Sleep.” It’s unusual to see an opening act cover a song by the headliner, but Cebar remarked, “This is one he doesn’t do, so I can do it.” Lowe has songs to spare.