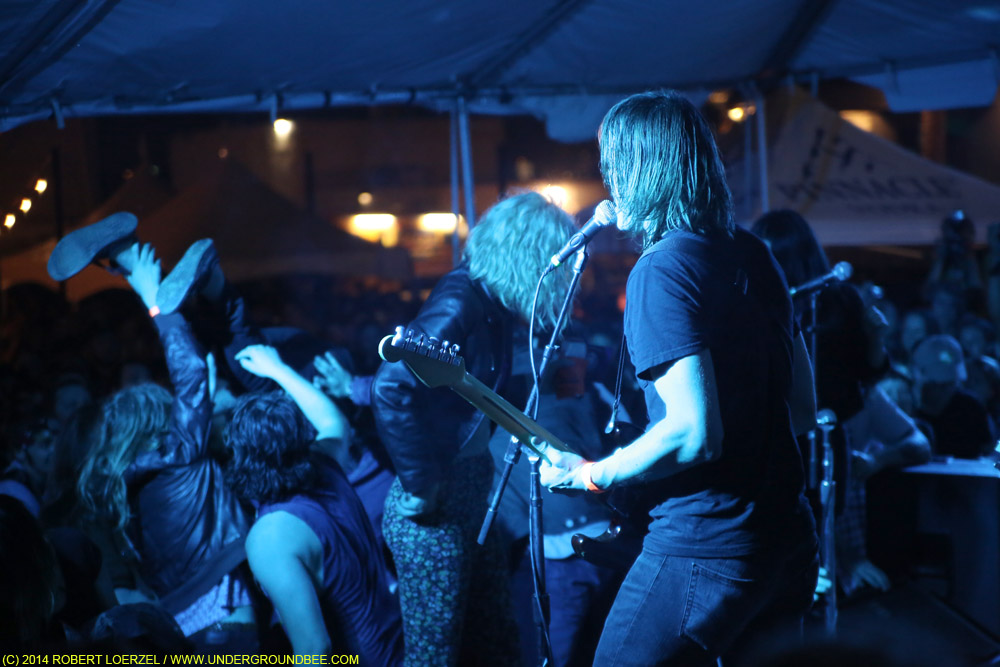 This was the year people died at South By Southwest.

The sprawling, raucous, nebulous combination of a trade show, academic conference, rock festival and backyard barbecue went silent for a minute on Thursday night. I happened to be at a bar called Holy Mountain, waiting for a band from Glasgow called Honeyblood to play on the “backyard” stage, when a 20-something woman in a green SXSW shirt stepped up to the microphone and asked, somewhat meekly, for quiet. She had an announcement to make.

It took a minute for the usual bar chatter to subside, but fairly soon, everyone paid heed to the chorus of shushing. And then the woman at the mic asked us all to be silent for a moment of reflection about those who were killed and injured the night before, by an allegedly intoxicated motorist who has been charged with murder. The silence was not complete, of course — sounds floated into the room from the city around us — but for a tent in the middle of a rock festival, the hush seemed remarkable. A full minute or more elapsed.

And then, glancing at her watch and exchanging a look with another SXSW volunteer, the young woman thanked us. People returned to their conversations and drank their beers. The two young Scottish lasses who make up the band Honeyblood took the stage and began pounding out their scrappy songs. The moment had passed. The music went on. But I think it’s safe to say that the tragic events of the week remained on the minds of many people throughout the rest of SXSW. (The SXSW Cares Fund is accepting donations to help people affected by the tragic events of March 13.)

As David Carr and Manny Fernandez wrote in The New York Times, the tragedy “crystallized a question floating around the edges of the festival for years: Has South by Southwest become too big and too rowdy, and has it lost the original spirit of what it intended to be?” Based on everything I’ve read so far about Thursday night’s terrible incident, I don’t believe it’s fair to hold SXSW itself or Austin officials responsible for what happened. Anywhere large crowds gather, it’s always possible that that someone will create havoc. There’s only so much authorities can do to prevent crimes and accidents.

And yet, it’s true that downtown Austin’s main east-west drag, Sixth Street, which is closed off to motor vehicles, gets alarmingly crowded every night of the festival. Unlike Lollapalooza, Pitchfork and other music festivals where audience members need to a ticket to enter a fenced-in area, SXSW unfolds at nearly 100 nightclubs and other venues spread out in and around downtown Austin, without any wall to keep out anyone.

That’s part of what makes it so great, but it also makes it an attraction for people who just want to party in the middle of the street. That isn’t necessarily a bad thing, either, but it can result in dangerous crowding, rowdy behavior and many near collisions involving pedestrians, bicyclists, cars and Austin’s increasingly plentiful pedicabs. In the midst of this chaos, people like me are rushing from one music venue to another to see short concerts by the thousands of bands SXSW has imported into Austin for the week. It’s a wonder more people don’t get hurt.

At one point on Friday night, en route to catch a band from Greenland, I approached Sixth Street, looking for the entrance to Esther’s Follies. Several people came running recklessly around the corner. At first, I thought it was just a few revelers goofing around, but as I turned onto Sixth, I saw dozens of people were scrambling down the street. A man held his arm protectively in front of me and gestured for me to stand against the wall. I asked, “What’s going on?” A man passing by told me, “There was a huge brawl in the middle of the street.” We both looked up the street to the area where the action seemed to be happening. The noise subsided and the wave of people stopped rippling. “Oh,” the man said, “it looks like it’s over now.” It turned out to be just a passing moment of panic in the midst of the Sixth Street scene. [Update: This video on the Total Frat Move website, titled “Guy Nonchalantly Eats Pizza In Middle Of Chaotic Brawl At SXSW,” might be the same incident. Either that, or yet another brawl during SXSW.]

So, is SXSW too big? Perhaps, but I don’t see how it’ll ever shrink. As annoying as the sprawl can be, it’s also what makes SXSW special. The week of SXSW offers far more than just the official music, interactive and interactive conference. Countless unofficial parties and concerts are happening in just about every nook and cranny of Austin. The whole city feels alive with music and its legendary weirdness. It all adds up to an impossibly long list of entertainment options.

Think of SXSW this way: At a festival like Pitchfork, with three stages, you can see around 50 percent of the musical performances if you attend for the whole weekend. Lollapalooza has several stages, so you’ll probably see something like 10 percent of all the performances. How about SXSW? At any given time during the week, close to 100 official concerts are happening, plus dozens of unofficial shows. Now, many bands play multiple gigs, which does make it easier to catch them at some point during the week. But in the end, you’ll see only a fraction of 1 percent of everything that happened.

As a result, SXSW is an event where your experience may be utterly different from someone else’s.

For someone focusing on the big names, this was the year Lady Gaga ruled SXSW, delivering the keynote speech and faux-puking during her concert. And, according to another New York Times article, this was the year that “South by Southwest Festival Starts to Feel Corporate.” (“Starts?” you may be thinking… Austin Bloggy Limits has a good response to that review and some of the other SXSW press coverage.)

I really don’t care about Lady Gaga (or Keith Urban or Pitbull or Justin Bieber), so I avoided all of that folderol. This was my first visit to SXSW since 2008, and for me, this was a chance to see a lot of bands I haven’t seen before. I ended up watching full sets by 62 musical acts, plus portions of another eight shows. The vast majority of these bands and singers were completely new to me. In most cases, I’d listened to a song or two by these artists when I was trying to decide what to see.

And in most cases, these bands delivered some really good and even great performances. Stipulating that my SXSW was different from everyone else’s, for me this was the year that guitars and garage rock were stronger than ever. On the final night at Hotel Vegas, located over on an increasingly popular stretch of East Sixth Street, the young fans moshed like mad and tossed beers as bands like Dirty Fences and Bad Sports bashed out their songs.

I didn’t deliberately set out to see a lot of bands led by women, but the ladies dominated the stages this year, from the hard-rocking country singer Lydia Loveless (who wedged her guitar neck between her legs at one point) to St. Vincent, who moved like a wind-up doll in a bloodstained dress. Compared with those theatrics, Laura Cantrell and the Haden Triplets each gave low-key performances, and yet their vocals were among the most beautiful things I heard all week.

I did try to see as many artists from distant places as I could, including musicians from the Netherlands, South Korea, Uruguay and other countries. The Norwegian bands Death By Unga Bunga and the Launderettes topped almost everyone else with their sense of fun showmanship. The Japanese band Mothercoat, which I saw at SXSW in 2007, impressed me all over again with its jumpy, tricky art rock. And South Korea’s Jambinai gave me goose bumps with the powerful, almost orchestral sweep of its compositions, which blended traditional Korean instruments with elements of heavy metal.

Some bands traveled a long way to perform in front of just a few people — how disappointing that must be — while hundreds of people lined up elsewhere to see bigger-name and more-hyped artists. But you could sense how gratified and pleased musicians from distant shores felt when they roused even a small crowd with their music. The Australian band Dog Trumpet, which formed all the way back in 1990, had never performed in the U.S. until now, but it didn’t take long for these veteran roots-rockers to win over new fans — including me — with their instantly catchy songs.

My other favorites of the week included Ex Hex, Smacksoft, the Blind Shake, Burnt Ones, Cosmonauts, Warm Soda and Connections, a young group from Columbus, Ohio, that sounds so, so much like Guided By Voices in its prime. On the first night of SXSW, I stopped to watch the Dutch band Mozes and the Firstborn just because I liked the sound of their music coming from Bar 96 as I was walking past. At the end of the night, I spotted some of the guys from that band in the audience at another gig, by the excellent California group Together Pangea, moshing like true fans.

In spite of last week’s tragedy outside the Mohawk, SXSW 2014 was fun and even inspiring. So many people, speaking in all sorts of accents and languages, gathered in one weird place to make and hear music.

A list of all the bands I saw at SXSW is below. A separate blog post compiles some of my tweets from throughout SXSW. And what about photos? Well, I took more than 29,000 over the five days of music, and I’ve barely had a chance to look through all those pictures to choose the best ones. My plan is to take my time and post a number of galleries in the coming weeks. Stay tuned…