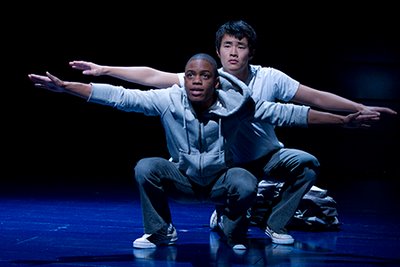 My feelings about Frank Galati’s new play at Steppenwolf Theater, Kafka on the Shore, are not far off from my feelings about the book he adapted it from, a novel by Haruki Murakami. Both the book and the play have a wonderful sense of invention and however strange they get, they flow along with a casual but compelling sense of narrative.

But in both cases, I came away feeling a little unsatisfied. I love surrealism and magic realism, or whatever you want to call these sorts of stories where peculiar, unworldly things happen. And I don’t feel a need to have everything explained to me. In fact, a nice, neat explanation can ruin a surreal story. But the problem with art based on random associations and non sequitors is that, well, sometimes it feels just random. At times, both versions of Kafka on the Shore are random in ways that seem silly and immature… or maybe not silly enough or immature enough. The reaction at the end is “Huh?”

As in the book, the central figure, a runaway teen who calls himself Kafka (Christopher Larkin), is a fairly empty character. The character who calls himself an empty shell, the mentally slow man capable of speaking to cats, Nakata (David Rhee), somehow feels more fully developed. And the truck-driver who helps Nakata in his mysterious quest, Hoshino (Andrew Pang), is a delightfully mundane counterpoint to all of the peculiar goings-on in Murakami’s story. I was skeptical that the parts of the book featuring supernatural characters in the guise of Johnny Walker and Colonel Sanders would translate to the stage, but they turned out to be a humorous highlight of the play, with Francis Guinan portraying the roles with relish. Aiko Nakasone is fresh and funny as the girl Kafka befriends on his runaway odyssey. Despite some comic moments, the human actors playing cats never feel quite right, however.

It is impressive that Galati managed to cram so many details of the book into a faithful stage adaptation. In spite of its flaws, Steppenwolf’s Kafka on the Shore is a fascinating journey – fascinating enough that I’d recommend seeing this play if you have a taste for the bizarre.