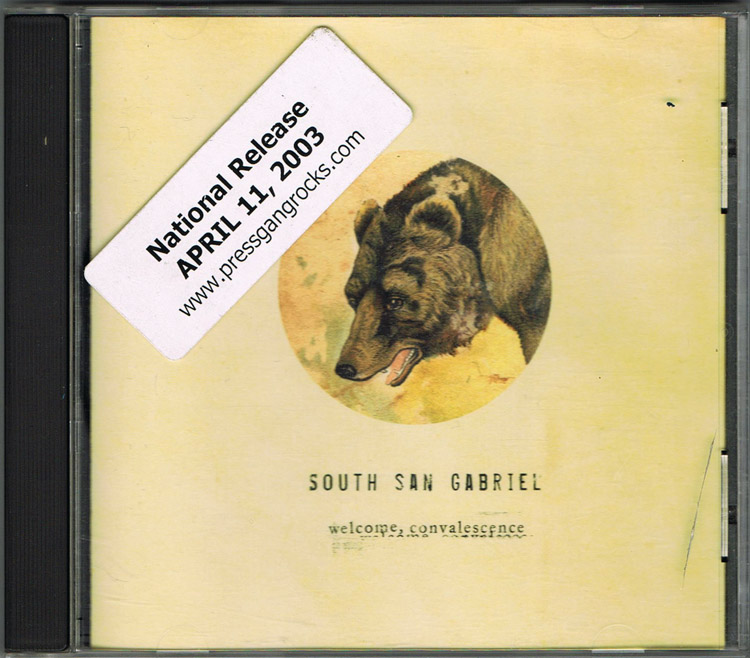 The only reason I thought about this anniversary is that I happened to pull out my CD of South San Gabriel’s album Welcome, Convalescence last week. And I just happen to have a copy that was sent out to the press before the album’s official release date. So there’s a sticker on the jewel case that says: “National Release APRIL 11, 2003.” Ten years ago today.

I doubt if anyone else is making note of this anniversary. It’s probably the most obscure record I included in my top 12 list of the best albums from the last decade. But it’s the most magnificent recording that Denton, Texas, singer-songwriter Will Johnson has made in his prolific career fronting Centro-matic, making solo records, collaborating with many other artists and occasionally making music with a side-project sort of group called South San Gabriel.

While Centro-matic plays a style of rock somewhere between power pop, roots rock and lo-fi post-punk, South San Gabriel’s Welcome, Convalescence layers orchestral touches and menacing abstract noise on top of Johnson’s collection of melancholy songs. Death and violence are always lurking nearby in this set of lyrics. The record opens with the line, “Make no mistake, we’ll be the ones to happily set you on fire,” and goes on to mention gunshots, dagger, slings, hammers, poisonous arrows, axes and arson. (“At your feet was a mouthpiece and nozzle/Fit for the gas spreading all through the house.”)

There’s a way out of the darkness. In the final track, nearly buried by a dense, beautiful cacophony, Johnson (or the character in his lyrics, anyway) travels “quietly out from the passage/if only to see the Splinter Angelic.” I’m still not sure exactly what the Splinter Angelic is, but it’s a fitting description of the evocative music South San Gabriel made on this record, released a decade ago today.

The CD of Welcome, Convalescence is out of stock at the Undertow record label’s online store, but MP3s can be purchased here.