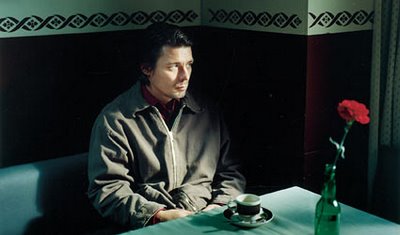 Lights in the Dusk quietly came and went here in Chicago last month, playing one week at the Gene Siskel Film Center. Nevertheless, I still feel the need to proclaim the glories of this film, one of my favorites of 2007 so far. The latest gem from one of the best directors working today, Aki Kaurismäki of Finland, Lights in the Dusk did not receive the same sort of attention as Kaurismäki’s previous film, The Man Without a Past, which felt like a breakthrough of sorts for him. While it certainly did not turn Kaurismäki into a household name outside of Finland, it at least received decent distribution at well-known art theaters in the U.S. And it was one of Kaurismäki’s best.

In Chicago, at least, the critics gave Lights in the Dusk a more mixed reception. It’s true that it lacks the immediate accessibility of Man Without a Past. The humor is even drier and more restrained than Kaurismäki’s typical deadpan comedy. But, as a Kaurismäki connoisseur (if I may call myself that), the drastically underplayed humor and seemingly flat emotions made me appreciate Lights in the Dusk all the more. That’s what Kaurismäki is all about. The closest equivalent to his films in the U.S. are those of Jim Jarmusch. Both of these directors remind me of the great French filmmaker Robert Bresson, who used a similar cinematic vocabulary. There’s great beauty in the way Bresson, Kaurismäki and Jarmusch cut from one shot to another in their films. The editing moves with a rhythm and logic that is both compelling and amusing. (It’s worth noting that Kaurismäki edited Lights as well as writing, directing and producing.)

Bresson was also a pioneer in instructing his non-professional actors to read their lines without any emotion, and in doing so, he paradoxically created a Rohrshach test of a viewing experience for audiences that is actually quite emotional. I see the same thing in Kaurismäki’s work. The things that don’t happen, the things that aren’t said, the things we don’t see are often just as important as what is taking place on the screen. It’s the way the camera lingers on the faces. Or the way the camera stays in one room while the actors go outside and then come back. (There’s a classic scene like this in Lights in the Dusk, in which the main character gets beaten up off-screen. We know exactly what happens but we see none of it, just the setup and the aftermath.)

Lights in the Dusk is supposedly the third film in Kaurismäki’s “Loser Trilogy,” following The Man Without a Past and another neglected movie little seen here, Drifting Clouds. That’s an amusing conceit, and it’s true that all of these films depict people who might be thought of as “losers.” But that’s also true of just about every other movie Kaurismäki has ever made. I’m not sure that these three truly stand out as a trilogy distinct from his other work. Lights stars Janne Hyytiainen (don’t you love those Finnish names?) as Koiskinen, an introverted guy with a job a night watchman who gets duped into allowing a robbery to happen. He is lured into the scheme by a beautiful woman, who is reluctantly being used herself as a tool of some Russian mobsters. Meanwhile, Koiskinen is blithely ignoring the woman at the food stand who clearly has feelings for him.

Like many of the characters in Kaurismäki films, Koiskinen shows about as much emotional range as a block of wood, and I assume this could frustrate some viewers, but I feel like Kaurismäki somehow allows us to peer into his characters’ souls without resorting to conventional means. This security guard in Lights strikes me as a male counterpart to the socially inept female protagonist in one of Kaurismäki’s greatest films, Match Factory Girl. Another clear influence on Kaurismäki’s work are the silent films of the “Great Stoneface” Buster Keaton and Charlie Chaplin. Kaurismäki even compares his latest hero to Chaplin’s Tramp in the press release for Lights.

One of Kaurismäki’s recurring themes is the difficulty of human communication, which he shows with a peculiarly Finnish brand of shyness and diffidence. Koiskinen amusingly sums up the attitude with one of his lines: “I know how to rock and roll. I just don’t feel like it.” Kaurismäki’s films almost always have a bleak side, and Lights is no exception, but it is one of the Kaurismäki films that ends with at least a slender ray of hope.

While I have always adored the look of Kaurismäki’s films, the striking compositions, colors and feeling of depth struck me anew. A great deal of the credit must go to cinematographer Timo Salminen, though I’m certain Kaurismäki plays a big role in the look of his films. It appears to me that Salminen and Kaurismäki are making very calculated use of lighting, creating scenes with an odd, alluring combination of realism and surrealism. So beautiful. And that’s part of the reason these films should be seen on a big screen. Alas, if you do get a chance to see Lights in the Dusk, I suspect it will be on DVD. It will still be well worth watching, even on a small screen.

Here’s Strand’s trailer for the American release of Lights in the Dusk … but also check out the superior German trailer, which uses much less dialogue and emphasizes the film’s silent, awkward moments – although it’s unfortunate that the few spoken lines are dubbed into German.